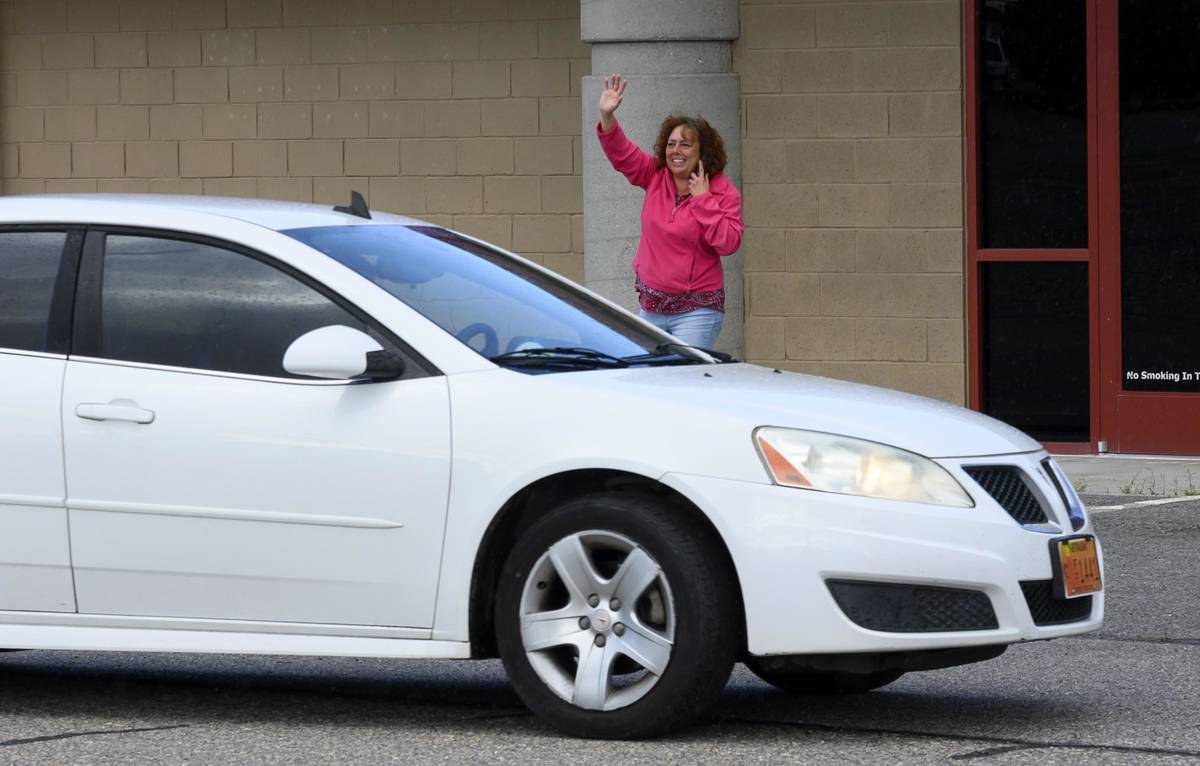 Richard Stephens/Special to the Pahrump Valley Times Carrie Radomski, Beatty town secretary, waves as townsfolk drive by honking and waving to show their appreciation for her ten years on the job.

In keeping with CDC guidelines and the governor’s stay at home order, the Beatty Town Advisory Board met Thursday, April 9 via call-in conferencing. Chairman Dick Gardner had to join the town secretary Carrie Radomski at the town office for the meeting because of technical difficulties. All other participants joined from home.

The meeting was brief. Other than approving the town’s expenditure vouchers, the board only dealt with one item of business, approving a letter to the Nevada Division of Environmental Protection, Bureau of Mining Regulation and Reclamation in support of a major modification of a reclamation permit for the Sterling Mine.

The mine, previously called the Saga Mine, is operated by Couer Sterling, which is also one of the companies doing further gold exploration near Beatty. It is located on the east side of Bear Mountain, the large mountain just south of Beatty. The access road to the mine intersects with Highway 95 a few miles south of U.S. Ecology.

The board’s letter says that they have discussed their concerns with Couer Sterling representatives, and that they are satisfied that the company will “stand by their assurances” that “they have no plans to obstruct public access to roads, trails, and points of interest that are accessible today,” and that they “are sensitive to our concerns about water resource protection and conservation.”

The letter also says that the board is confident that the company will work closely with the Nevada Department of Transportation “to monitor potential increased traffic on Highway 95 entering and exiting the project site, and will, if necessary, cooperate with NDOT to address any traffic safety concerns raised by NDOT, the Nye County Sheriff’s Office and Emergency Management departments and/or Nevada Highway Patrol.”

The letter says that the company “has become part of the community,” and that the board looks forward to “their continued success and partnership with the Beatty community.”

The meeting marked the ten-year anniversary of Radomski as the town secretary, and board members took the opportunity to thank her for her dedication to the job.

“I want to thank Carrie for how hard she works for the whole town, not just the board,” said treasurer Erika Gerling.

Board member Perry Forsythe noted that he had been working with Carrie as a board member for a year, and stated, “She knocks herself out to help everybody in anything she can.”

The meeting adjourned after only 20 minutes, but Gerling had arranged a surprise for Radomski. In response to Gerling’s invitation, a number of Beatty residents turned out at 4 p.m. to drive by the front doors of the community center and honk and wave at the secretary to show their appreciation for her service.

Town custodian Ricardo Lopez had his pickup parked across the street with a banner on its side that had a heart and the words “10 Years, We Love You.”