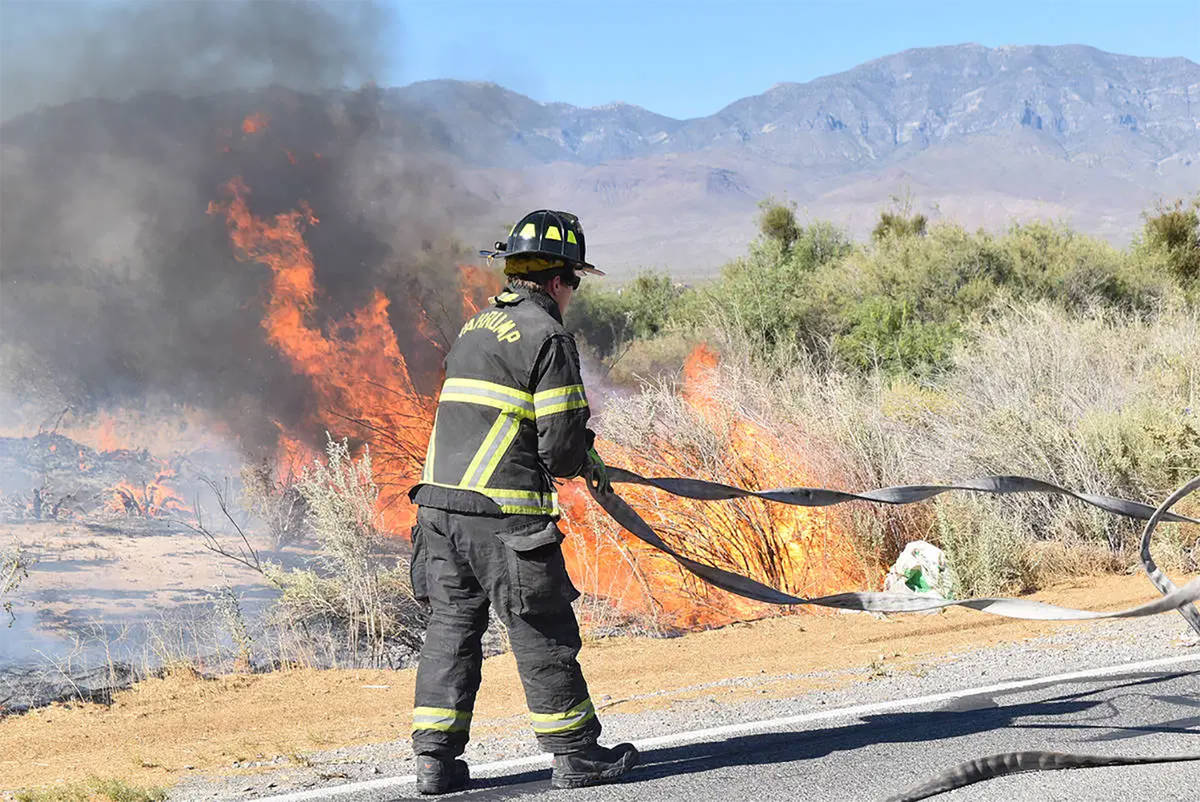 Special to the Pahrump Valley Times Recent brush fires have kept Pahrump Valley Fire and Rescue Services crews active in recent weeks. Some of the brush fires, according to Fire Chief Scott Lewis, were related to controlled burns.

“Within the last two weeks we responded to probably a dozen ground-cover fires and we are reminding our residents that we have extremely dry conditions,” Lewis cautioned. “It was windy and dry conditions coupled with the elevated temperatures that are creating the perfect conditions for erratic fire behavior.”

As a result, Lewis noted that southern Nye County has already experienced several Red Flag Warning days, which are issued by the National Weather Service for weather events which may result in extreme fire behavior that could occur within 24 hours after the warning.

“It is very early in the season and we are anticipating that we could potentially have a very robust brush fire season, so we are preparing for that,” Lewis said. “We have all of our equipment up and running, and our training has been completed, but we need the community’s assistance in making sure that if they do a controlled burn, it is on a day that is permitted, and to make sure that fire is dead out, because if winds pick up and re-ignite those deep-seated or buried embers, it could extend over to a neighboring property and cause secondary issues that were clearly unintentional, so we don’t want to have any injuries or deaths with those types of fires.”

Additionally, Lewis said if anyone is experiencing a problem with controlled burns in the area, or if they see something suspicious, they should call 911 immediately and report it.

He also said Station One on Highway 160, just north of Basin Avenue has implemented a new method for obtaining a controlled burn permit.

“It’s essential that we get notified and be on that scene as timely as possible,” he noted. “The burn permits are perpetual as long as you’re on the same property, however we are doing it online now. They should go on the Pahrump Valley Fire and Rescue Services website, and as long as you’re owner of the property and meet the minimum requirements to have a burn permit, and once the paperwork is completed, you will receive a telephone call from our administrative director and pick up a copy of it, including the rules.

As a side note, Lewis spoke about a substantial fire that occurred late last month on the borderline of Death Valley and Beatty in the Sawtooth Mountains.

“It burned approximately 100 acres and it’s clearly a Southern Nevada and Nye County issue,” Lewis said. “So it’s something that we are watching closely. We have been flagged by the experts indicating that the dry fuels and lack of precipitation last year are creating those perfect conditions for us, so we have to be extremely mindful of all of our actions so we don’t start unwanted fires.”