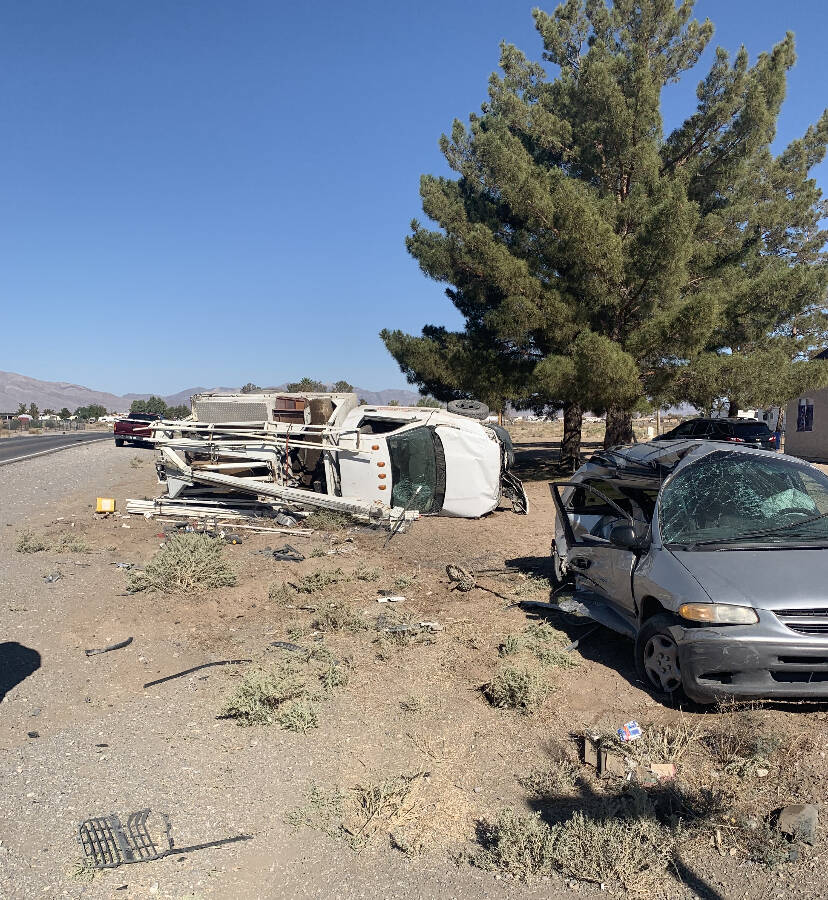 (Nye County Sheriff's Office) Two people were transported to Desert View Hospital following a two-vehicle crash at the intersection of Manse Road and Money Street on Wednesday, May 25. It was one of many emergency calls crews responded to in the past week.

On Tuesday, May 24, fire crews responded to a report of a rollover crash after a driver struck a burro along northbound Highway 160 near mile marker 26 at approximately 10:40 p.m.

Pahrump Valley Fire and Rescue Services Chief Scott Lewis said crews arrived to find the vehicle resting on its roof in the middle of the highway.

“There was a deceased burro laying on the roadway, but there was no entrapment and no serious injuries to the driver,” he said.

Two people were transported to Desert View Hospital following a two-vehicle crash at the intersection of Manse Road and Money Street on Wednesday, May 25.

“We arrived to find a two-vehicle accident with significant damage sustained to both vehicles,” Lewis said. “It was a T-bone type of collision. Crews medically assessed and found two patients who were both transported to the local hospital. The cause of the accident is under investigation by the sheriff’s office.”

It was just after 2 p.m. Tuesday, when fire crews responded to a report of a structure fire along the 1400 block of South Ogallala St. on May 20, where upon arrival, crews found a mostly extinguished kitchen fire.

“The remainder of the fire was extinguished and crews checked for extension and found none to the nearby attached exposure,” according to Lewis. “There were no injuries, and the cause was found to be related to unattended cooking for the ignition source.”

Crews arrived to find a hydraulic operated compactor, where they located a pile of metal and rubbish that was on fire,” Lewis said. “We were working with the facility and the fire was quickly controlled with no extension. There was one person who was medically assessed, however, they were not transported from the scene. The cause of the fire is related to a mechanical malfunction.”

On Sunday, May 15, fire crews were dispatched for a report of a structure fire along the 3400 block of McGraw Road at approximately 9:21 p.m.

After crews quickly extinguished the blaze with no extension, it was determined that the cause of the electrical fire was related to a malfunctioning water heater, according to Lewis. No injuries were reported.

A vehicle fire prompted the response of fire crews in the area of Malibou Avenue and Thousandaire Street on Saturday, May 14, at approximately 8:55 p.m.

“Crews arrived to find an engine compartment fire with extension to the passenger compartment,” Lewis said. “The fire was quickly placed under control and there were no injuries reported in that fire. The cause is thought to be mechanical failure.”

On Friday, May 13, fire crews were dispatched for an apartment building fire along the 1000 block of East Bourbon Street, at approximately 2:41 p.m.

“Crews arrived to find heavy fires showing from a quad-plex,” according to Lewis. “They commenced an interior attack and quickly controlled the fire with no further extension to the other units. There were no life safety issues and the fire is thought to be accidental in nature.”