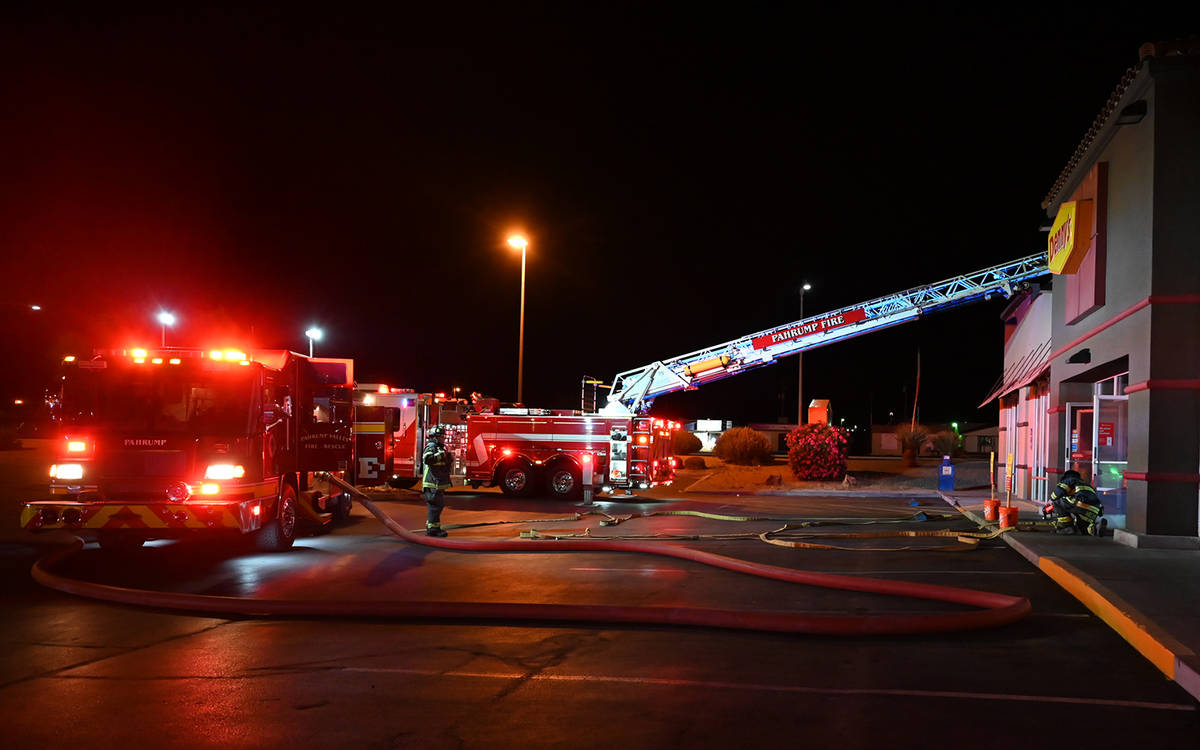 Special to the Pahrump Valley Times Pahrump Valley Fire and Rescue Services Tower Ladder apparatus was used to access the roof of Denny's after a fire broke out just before 2 a.m., on Tuesday, May 11. The fire forced the temporary closure of the business, which displaced more than two dozen employees. 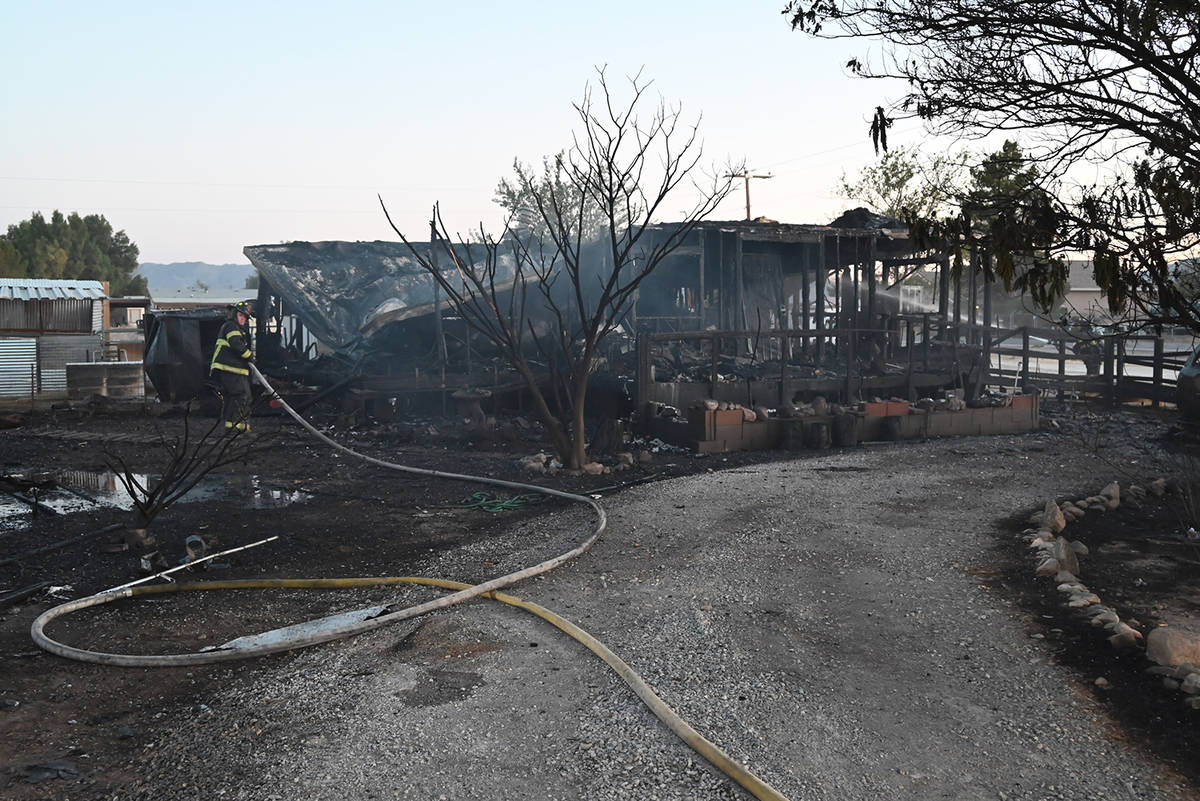 Special to the Pahrump Valley Times Pahrump fire crews responded to a structure fire that destroyed a home late Saturday afternoon May 15. Two fifth-wheel trailers were also consumed by the flames. No serious injuries were reported.

There is additional information on the cause of the Denny’s fire in May.

Pahrump Valley Fire and Rescue Services Chief Scott Lewis said crews were dispatched to the business at approximately 1:57 a.m., to find visible smoke emanating from the roof of the building.

“Crews arrived within two minutes, and they confirmed a working fire with fire showing on what we call division C Charlie, which is the rear side of the building,” Lewis said. “Crews quickly commenced an offensive interior attack. Fortunately, this fire occurred at a hydrant area, so they laid supply lines from a hydrant at the rear of the building on an access road feeding into the Walmart – Albertsons Plaza, and they also laid a second line to a yard hydrant located in the same parking lot.”

Lewis also noted crews found a working fire going up into an interior wall toward the attic space.

“They found that they had controlled the fire in quick fashion, and there was no extension; however, there was smoke, heat and water damage,” he said. There was mostly smoke and water damage throughout the restaurant from the activated sprinkler system. Crews did a good job and there were no injuries. The building was unoccupied at the time of the fire, due to the COVID-19 restrictions. It’s thought to be a failure of a piece of equipment that was affixed in the riser room.”

On May 14, just after 4 p.m., fire crews responded to a report of a motor vehicle accident and rescue assignment in the area of East Gamebird Road at Pahrump Valley Boulevard.

“Crews arrived on location and found a vehicle versus trees,” Lewis said. “There was a mechanical entrapment of that patient. Upon scene size-up, that vehicle revealed significant damage to the driver’s side front end. The vehicle collided with a tree at the side of the road, and the driver was trapped. Heavy rescue proceeded in, where they completed a door removal and a dash displacement, freeing that driver. That patient was then treated and transported to Mercy Air Base 21 and flown to trauma. The sheriff’s office was investigating the cause of that accident.”

On May 15, at approximately 9 a.m., crews were dispatched to the 3600 block of South Highway 160 for a three-vehicle accident with injuries.

“As crews arrived on location we confirmed the mechanism and we found a number of classic cars that were involved in this accident,” Lewis said. “Apparently, there was a quick braking action by several of the vehicles for a reason that’s being investigated, and the following vehicles were unable to stop in time. They were all entering the Spring Mountain Motorsports Ranch, located in that area. There was no entrapment, however there were four injured persons, two of which were transported to our local hospital.”

Later on Saturday, crews responded to a report of a wind-driven structure fire on the 3900 block of West Basin Avenue just after 6 p.m.

“As crews were responding, they were informed that it was a fully-involved structure fire, which had immediate exposures involved,” Lewis said. “The fire occurred in an area without hydrants, and as crews arrived on location, they confirmed a well-advanced structure fire with fire through the roof and throughout the building. It had extended to a closely located fifth-wheel trailer, which then had extended to a neighbor’s fifth-wheel trailer, where a shed was also well involved.”

Lewis went on to say that the wind-driven conditions created a brush fire at the front of the residence across the street from the origin of the fire in a large open lot.

“As I said, this fire occurred in a no hydrant area, therefore all of our water tenders and pumpers responded bringing water to the scene,” he noted. “They commenced the defensive exterior attack and quickly controlled the fires about 50 minutes after arrival and that includes the brush fire, the house fire, the shed fire and the two fifth-wheel trailers. Initially, there was a report that a person was trapped in the structure, so our first consideration was life safety, and we were prepared for a rescue mode. As our first medic unit arrived on location they confirmed that all occupants were out of the structure and there was no entrapment.”

Additionally, Lewis said while there were no initial reports of injuries, there was a request for four individuals to be medically assessed for possible anxiety as the fire progressed.

“None of them required transport to the hospital,” Lewis said. “The investigation revealed that it most likely started on the exterior of the house at an exterior wall surface, and then extended up because it went unnoticed for a period of time, so there was a delay in detection, and a slight delay in reporting the fire. The fire is thought to be accidental in nature, and we are investigating the possibility of improperly discarded smoking materials as a possible ignition source of debris stored on the outside of the house. Red Cross assistance was requested and received by the occupants of the structure.”