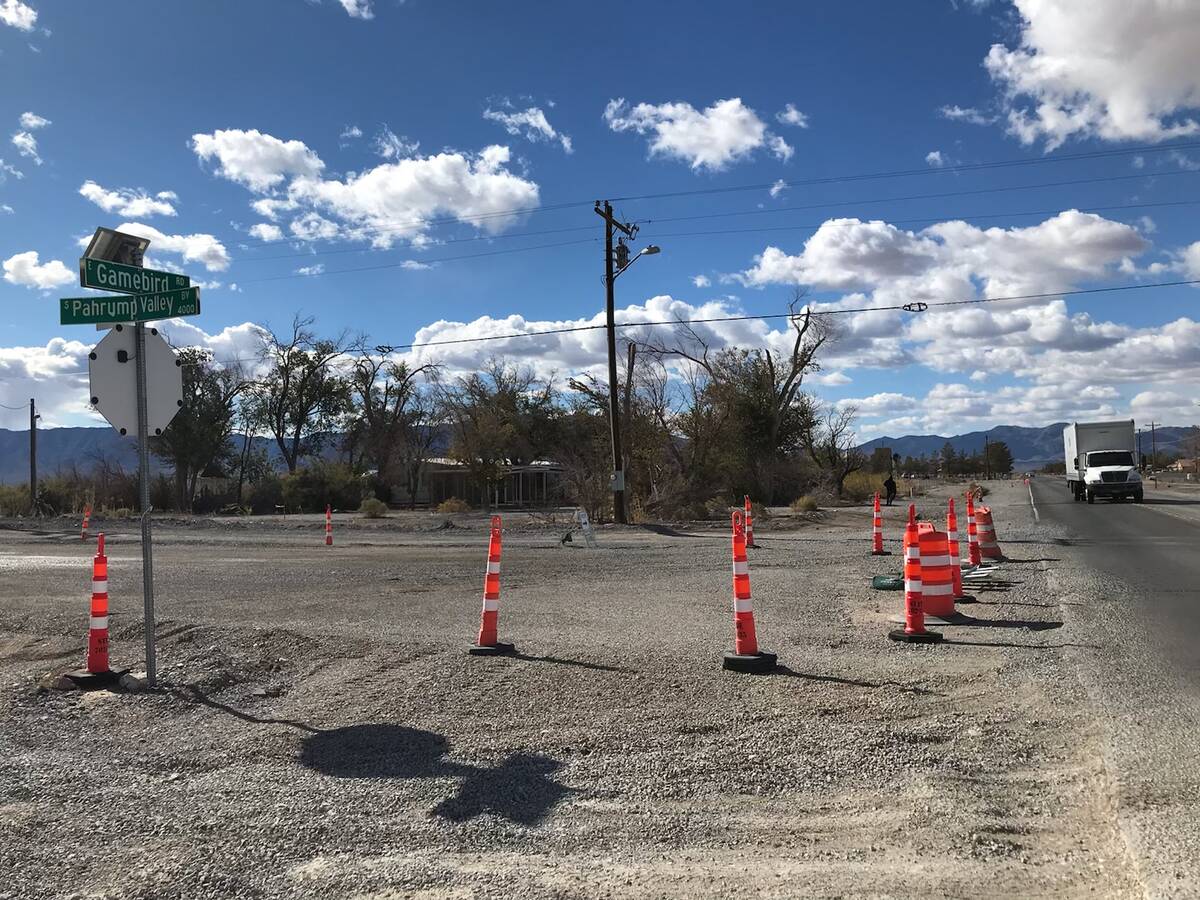 Robin Hebrock/Pahrump Valley Times In the coming year, the county has plans for several other substantial road projects as well. 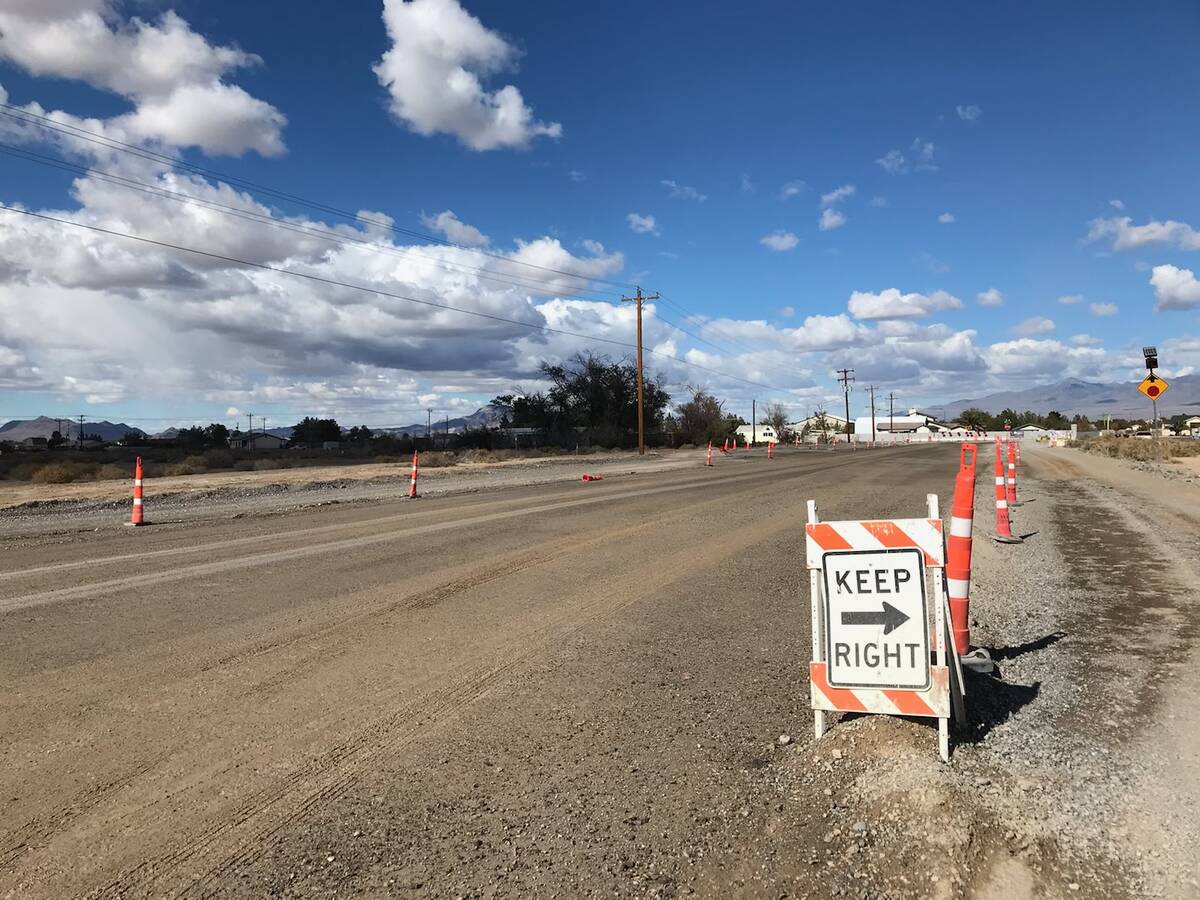 Robin /Hebrock Pahrump Valley Times On the Pahrump Valley Boulevard improvement project much of the work has been done and the laying of asphalt cement has begun.

Nye County Public Works Director Tom Bolling and his road crews have been quite busy over the last year, with a variety of repair, maintenance and improvement projects addressing an array of streets throughout the county. To keep the public and county officials apprised of what is happening, Bolling provided the Nye County Commission with an update on current and future projects during its Tuesday, Nov. 1 meeting.

Bolling started off by noting that for the northern parts of the county, such as Tonopah, Gabbs and Smoky Valley, with the winter months coming on, his department is simply readying for normal maintenance. For the central and southern portions of the county, however, major projects are either pending or already underway.

“Central, we talked about the scrub sealing that is happening, and we are also hauling cold mix from LVP in Vegas,” Bolling stated. “Once we have everything we need for that, we’ll start doing the cold mix overlay on the most western mile of Farm Road (in Amargosa), which is really, really bad. It’s got a lot of potholes and currently, we just fill those potholes in with gravel because we are going to dig that gravel back out and fill it with cold mix to make it one monolithic lift of cold mix inside the potholes and outside the potholes… It should last at the west end of Farm Road for a couple years to come, until we can get some dollars to replace that road out there.”

As to one of the most frustrating projects in recent months for drivers in Pahrump, the Pahrump Valley Boulevard improvement project, Bolling said much of the work has been done and the laying of asphalt cement has begun. This means that motorists will soon finally be able to enjoy the results of a project that has taken months to complete.

“We’re looking for about a mid-month finish, that is what they are projecting right now,” Bolling remarked. “So Nov. 15 is their projected end date and hopefully they hit that target because we are ready to do other stuff.”

Once Pahrump Valley Boulevard is wrapped up, Bolling said the county will be able to turn its attention to remedying flood damage experienced along Gamebird Road. The excess gravel from the Pahrump Valley Boulevard project will be transported to Gamebird Road and utilized to backfill lots that saw erosion, as well as for addressing repairs to ditches that shoulder the roadway.

Another source of irritation for the public has been Homestead Road just south of Highway 160, where utility work related to the construction of The Source dispensary has necessitated the presence of large metal plates on street. Nye County Commissioner Debra Strickland stressed that the issue was not the county public works department’s to deal with and noted that Great Basin Water Company, which is responsible for the situation, is apparently waiting on soils tests before it can move forward with restoring the road.

Commissioner Donna Cox said she would like Bolling to look into having the concrete barrier that had been erected in that location to prohibit left-hand turns out of The Source parking removed, as well.

“People are hitting it, especially because, we’ve all lived here for a long time and never had any obstruction there and all of a sudden, we are doing the same thing we always do and there is this obstruction in the road, on a curve,” Cox said. Bolling replied that he would see what could be done.

In the coming year, the county has plans for several other substantial road projects as well. The intersection of Highway 372 and Linda Street is one that the county is eyeing, with Bolling saying, “We have received quotes, we are trying to set up a meeting with finance to go over and discuss contracts. Once we get contracts established for the contractor we are choosing, we will be able to move forward with that project.”

On Basin Avenue, Bolling said the county is waiting on final drawings of the intersection of Basin and Dahlia Street. All earthwork will be done in-house with Nye County Public Works crews. “We’re going to do that over the winter and that way we can pave it late February, early March,” Bolling said.

The Basin Avenue project will include the complete removal and replacement of the roadway from Highway 160 to Blagg Road, along with widening of the street.

Bolling noted that public works is also focused on Wilson Road, which he hopes will be able to see an overhaul in the summer of 2023. Leslie Road from Irene Street to Mesquite Avenue is another that is planned for 2023 and throughout the next year, 15 miles of chip seal is scheduled to be done. Finally, Bolling added that the county is currently in the process of doing a drainage study for Winery Road from Highway 160 to Zuni Avenue. When the study is ready, the county can then decide on the best approach for managing stormwaters shedding off the fan in that area while repairing the road.