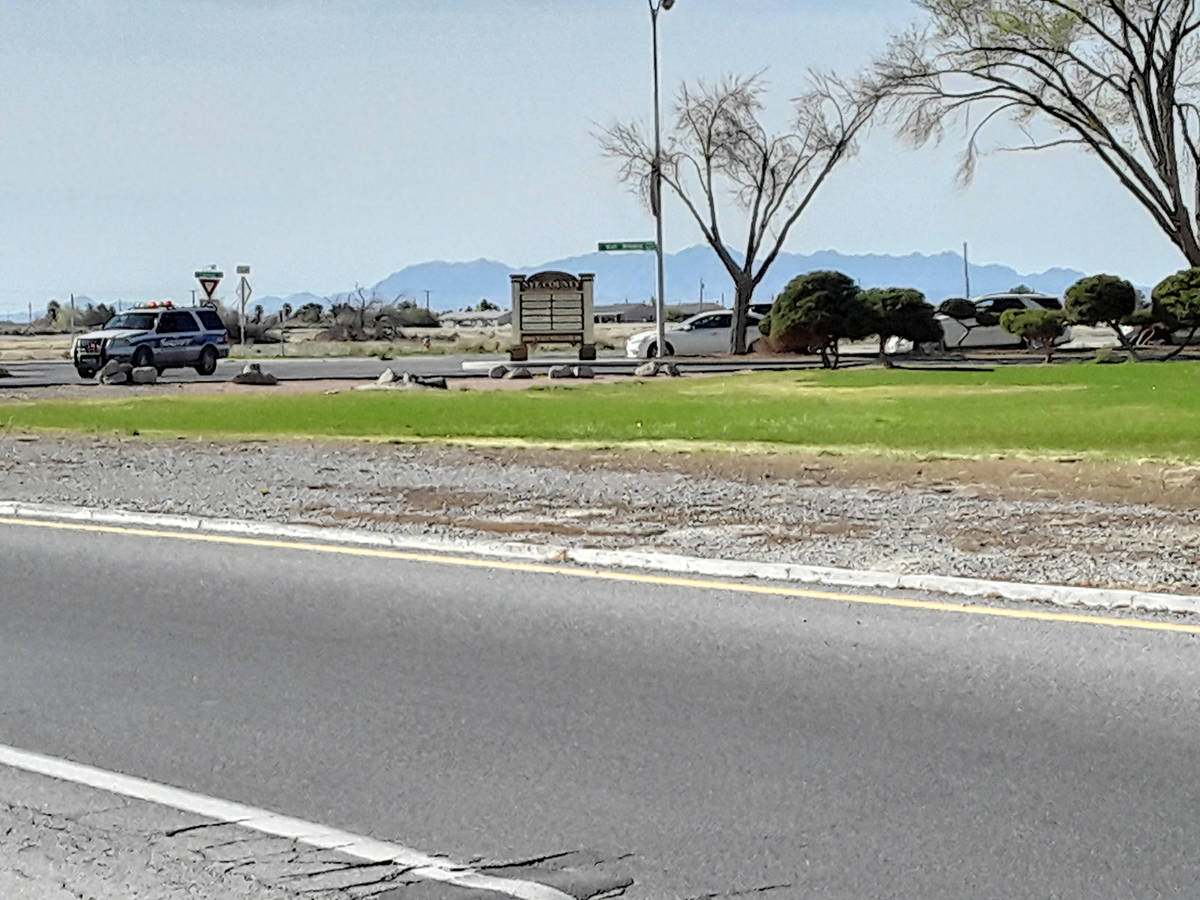 Selwyn Harris/Pahrump Valley Times The Nye County Administration Offices, 2100 E. Walt Williams Drive, is where residents have been directed to for drive-up COVID-19 testing in Pahrump. 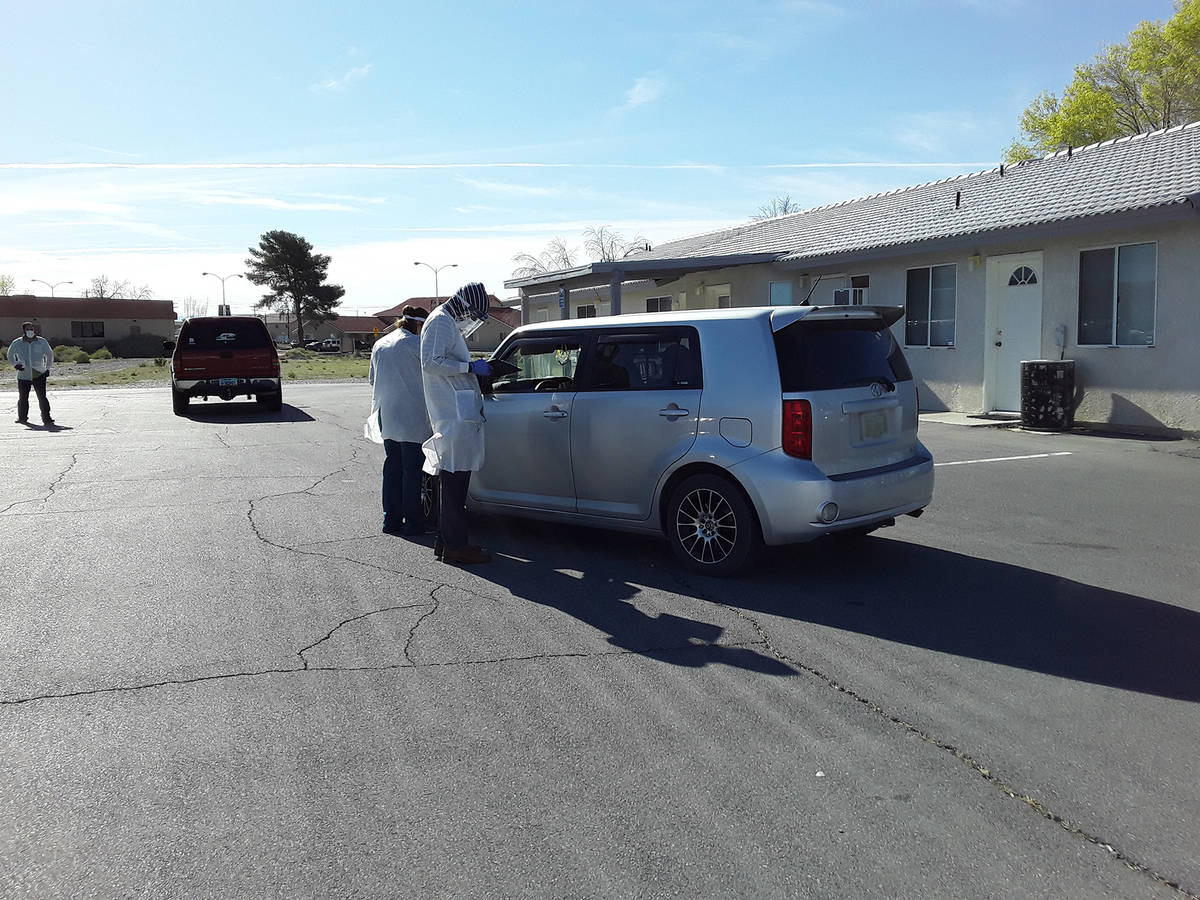 As of Monday, the county reported a nearly 60% recovery rate for the 56 COVID-19 patients in Nye County. The county also reported its first death of a Nye County resident, though that patient was said to have caught the virus and died outside the county.

“Nye County received confirmation Monday afternoon from the state regarding a COVID-19 positive patient fatality,” a statement from Nye County said. “The fatality is a Pahrump resident who contracted the virus outside the county and passed away outside the county (Clark County).”

Nye had its first COVID-19 case in mid-March, a man in his 60s who lives in Beatty who has since recovered, according to the county.

In Pahrump, 43 people have tested positive with 26 of those people recovering, according to the county’s tracker. In Amargosa Valley, the number of cases grew to seven in May with one person recovered.

Tonopah does not have any active cases, but the town has had four people test positive with all of those patients now recovered, the county reported.

One person in Nye had an antibody test, the first such test to be reported in Nye, and is also listed as recovered.

In total, 33 people have recovered from COVID-19 in Nye County.

In comparison, on May 8, the county reported a total of 44 COVID-19 cases with 18 of those reported as recovered, or nearly 41%.

Nye’s current recovery rate, nearly 60%, was lower than in Clark County where 5,463 people had tested positive as of Monday, according to data from the Southern Nevada Health District. Of those patients, 4,055, or 74.2%, were reported to be recovered by the health district.

Clark County’s death rate for COVID-19 patients on Monday was 5.42% with 296 people dead from COVID-19, according to the health district.

In the state, 7,046 people had tested positive as of Monday with 373 Nevadans dead from the virus, according to data from the Nevada Department of Health and Human Services’ Office of Analytics.

As of Tuesday, 103,703 people had been tested in the state. This gave an 8% positivity rate for the number of tests against the number of positive results. The recommended rate to be below before reopening is 10%, which Nevada reached earlier this month, according to the state’s data.

According to Nye County’s online tracker, approximately 1,530 tests have been reported to Nye. The positivity rate in Nye, as of Monday, out of the number of tests reported, was more than 3.6%.

For information on data for Nye County, head to https://www.nyecounty.net/1066/Coronavirus-COVID-19-Information

COVID-19 data from the state can be found at tinyurl.com/r9q9d46

“The County is also continuing an aggressive COVID-19 testing schedule with more drive-up testing in Pahrump the next two weekends, and appointment testing available in Tonopah,” according to a release from Nye County.

The next scheduled testing in Pahrump will be from 7-11 a.m. on Friday at 2100 E. Walt Williams Drive at the Nye County Administrative Offices. The Pahrump testing questionnaire, which must be completed and brought to the testing site, can be found at www.nyecountysheriffsoffice.com

According to an informational flyer, if people can’t print the questionnaire, the form can be completed on site.

People can be tested at the drive-up testing site even if they aren’t exhibiting symptoms under new Centers for Disease Control and Prevention.

People must stay in their car during the test. The test is a nasal swab of the nasal cavity and takes 5-7 minutes. According to Nye’s release, “Nye County is following the state’s Phase I reopening guidelines, ‘Roadmap to Recovery for Nevada.’ This includes social distancing of six feet or more in public, face coverings, hand washing and groups of less than 10.”

COVID-19 drive-up testing is being made possible by Chemisys Laboratory, through Serenity Health, which has partnered with Nye County and the Nye County Sheriff’s Office.

According to information from Johns Hopkins University of Medicine, over 1.5 million cases have been confirmed in the U.S. with over 283,178 people recovered and 90,353 have died from the virus in the U.S.

For more, head to https://coronavirus.jhu.edu/map.html

According to Johns Hopkins, nearly 4.8 million people have been infected with the virus in nearly 200 countries and 318,527 people have died globally (total includes the U.S.) as of Monday.