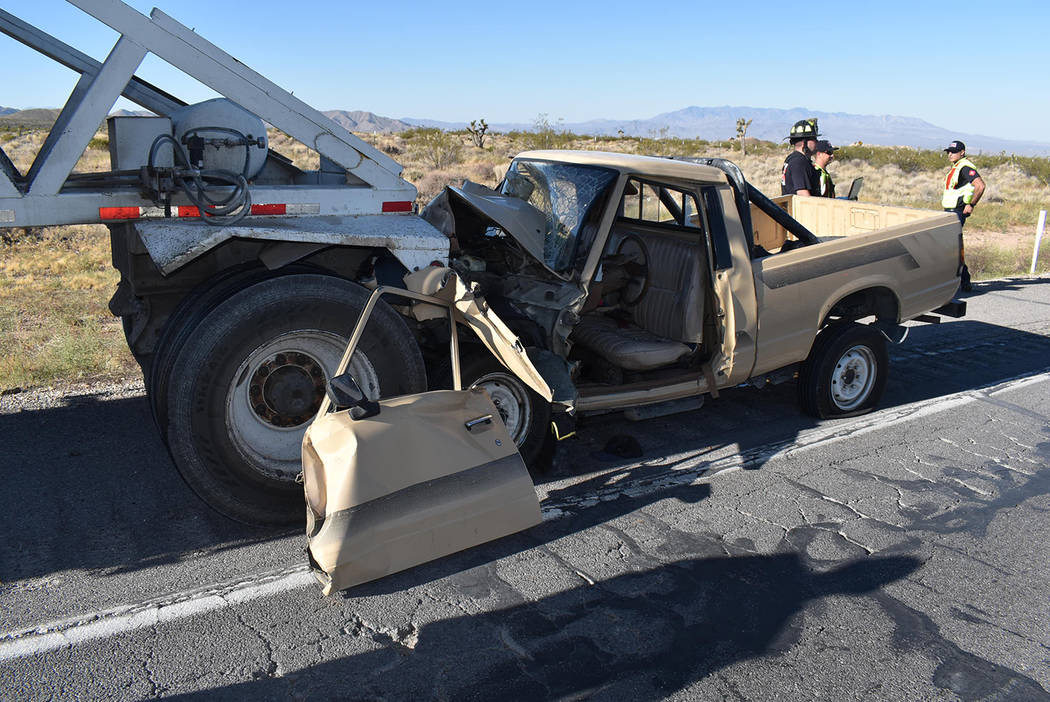 Special to the Pahrump Valley Times One man was transported via Mercy Air to UMC Trauma in Las Vegas following a two-vehicle crash along southbound Highway 160 in Clark County, just after 7:00 am on Wednesday August 14. Nevada Highway Patrol is investigating the exact cause of the collision. 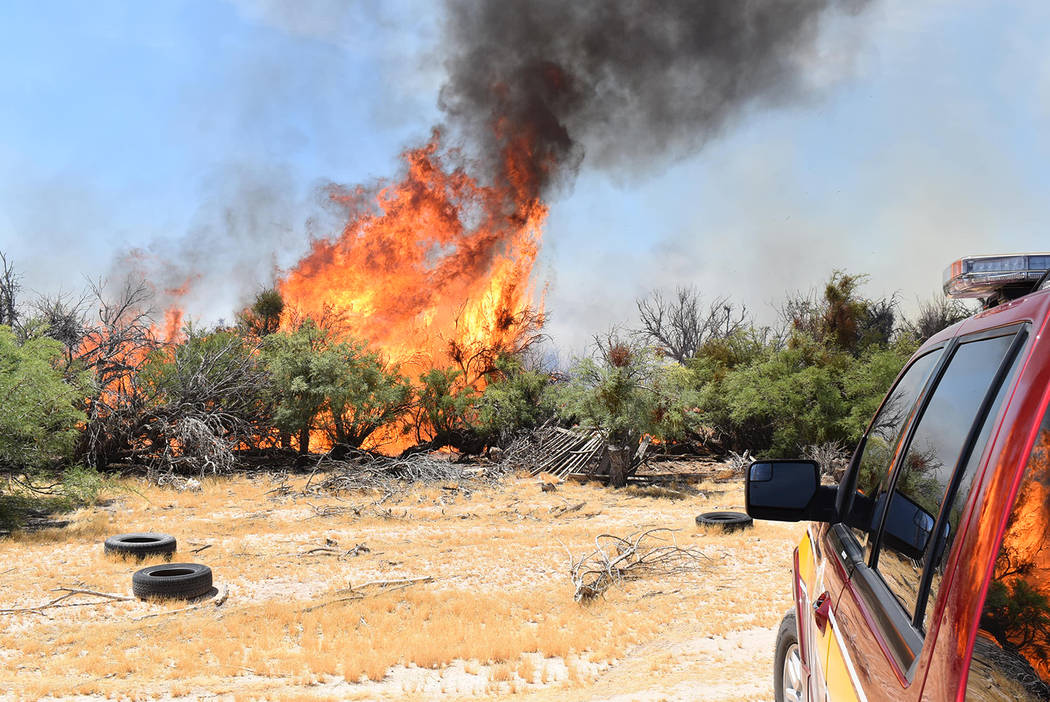 Special to the Pahrump Valley Times Pahrump fire crews were dispatched to the area of Kellogg Road and Vicki Ann Road for an unknown type of fire at approximately 1:31 p.m., on Friday August 2. Though fire crews put the blaze under control within an hour, they remained on scene for roughly four hours to extinguish any flare-ups from the windswept, mixed-fuels blaze

One person was transported via Mercy Air, following a two-vehicle crash along Nevada Highway 160 earlier this month.

Pahrump Valley Fire and Rescue Services Chief Scott Lewis said local first responders were dispatched to the mutual aid assignment at approximately 7:10 a.m. Wednesday, Aug. 14, in Clark County near mile marker 27 after a pickup truck collided with the back of a semi-truck.

“Crews arrived on location to find the pickup truck wedged underneath the trailer of the semi,” Lewis said. “The scene size-up revealed that one occupant was trapped in the pickup truck. Heavy Rescue One arrived on-scene and completed the extrication by removing the driver’s side door and performing a dashboard displacement.”

Lewis went on to say that Mercy Air 7 was also added to the assignment, where a landing zone was established and managed on Highway 160. The patient was subsequently flown to UMC Trauma in Las Vegas.

The cause of the collision is under investigation by the Nevada Highway Patrol.

On Monday, Aug. 12, fire crews were summoned to the 4300 block of Honey Locust Drive for a reported structure fire at approximately 12:30 p.m., where crews arrived to find light smoke showing from a one-story single-family dwelling.

“The investigation revealed a room and contents fire that was mostly self-extinguished,” Lewis said. “Crews checked for extension and ventilated the residence. The investigation determined that it was a probable accidental fire within a child’s bedroom. It appeared to be an overabundance of material placed on top of electrical equipment.”

On Monday, Aug. 5, fire crews were dispatched for a mutual aid assignment along Highway 190 near Death Valley for a single-vehicle crash at approximately 1 p.m.

“Crews arrived on scene to find the accident as reported with four injuries and three entrapped,” Lewis said. “Mercy Air flew one of the patients to UMC Trauma, while the three remaining patients were transported to Desert View Hospital by Pahrump medics, Level 1,” (lights and sirens).

On Friday, Aug. 2, Pahrump fire crews were dispatched to the area of Kellogg Road and Vicki Ann Road for an unknown type of fire at approximately 1:31 p.m.

“Crews arrived to find a well-advanced mixed fuels brush fire, with an abandoned structure exposure,” Lewis said. “Crews commenced a suppression along with BLM crews and the Nevada Department of Forestry and quickly brought the windswept fire under control within about an hour’s time. There was no extension to any of the structures. Crews remained on location for approximately four hours, mopping up the area due to the nature of fuels and the accumulation of dead material on the ground. There were no injuries reported.”