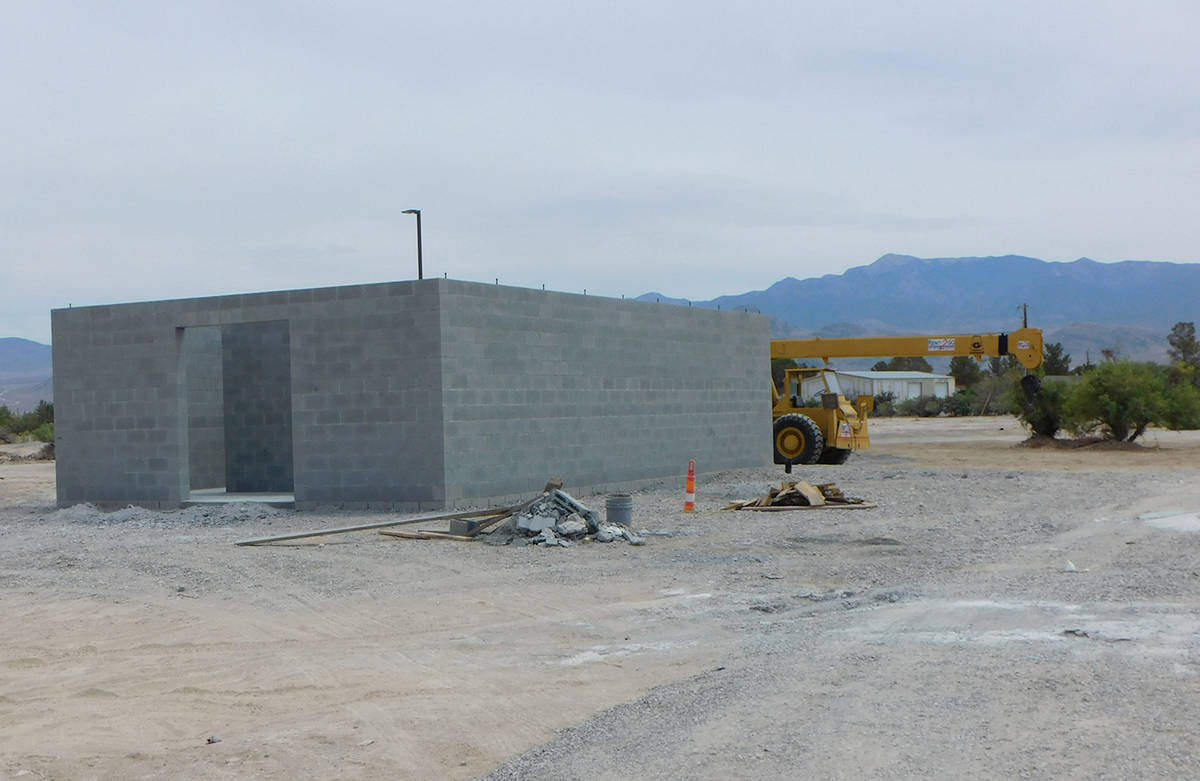 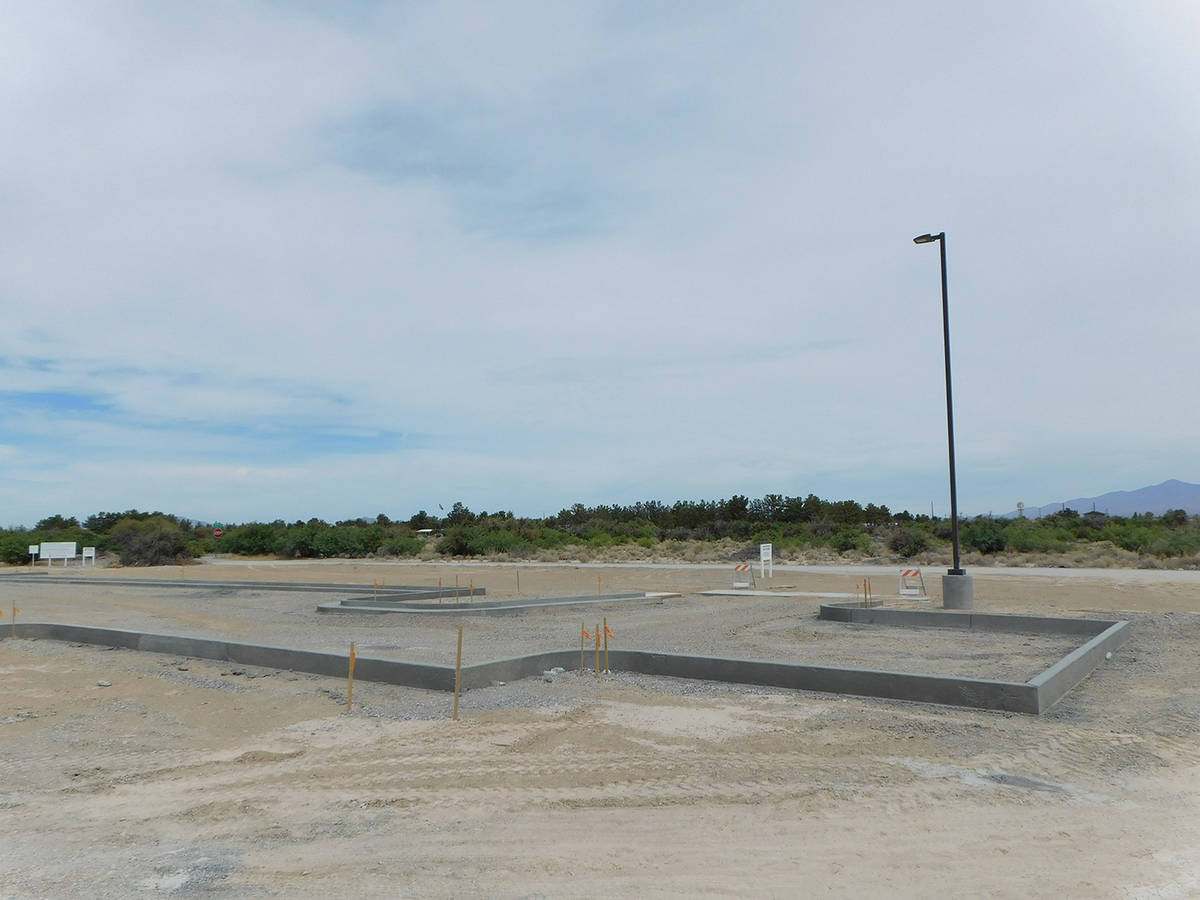 Robin Hebrock/Pahrump Valley Times Curbing has been installed, marking the outline of what will be the parking lot for Kellogg Park. 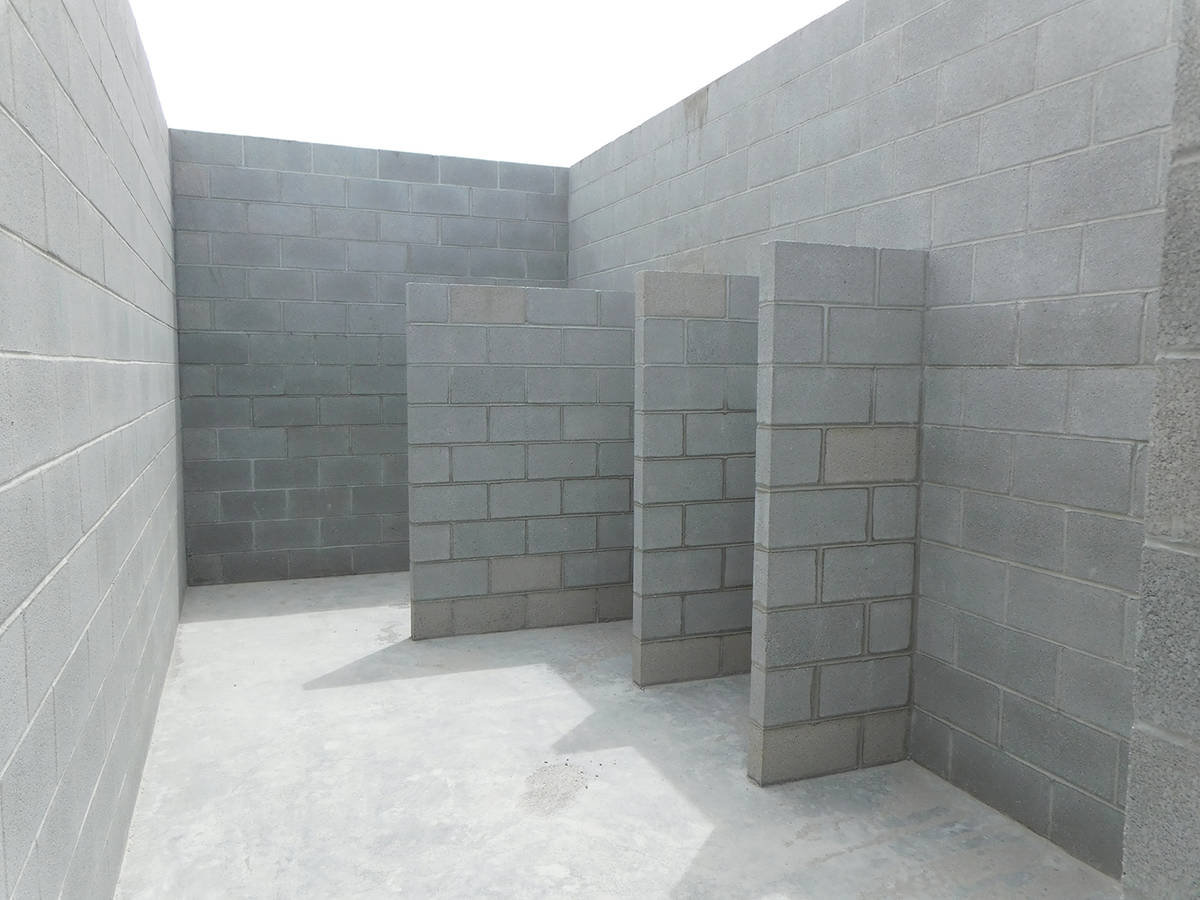 Robin Hebrock/Pahrump Valley Times A view inside of the concrete restroom facilities being constructed at Kellogg Park.

With a full three years of slow but steady development, the acreage located at the corner of Squaw Valley Road and Bridger Street in Pahrump is no longer just a bare, blank stretch of land populated by weeds and mesquite trees.

Now, a perusal of the site will show the bones of what will one day be the valley’s newest park, Kellogg Park, with a majority of the vegetation cleared away, light poles towering over the property like sentinels, curbing creating an outline for the future parking lot and the beginnings of a concrete building that will house the restroom facilities all making their mark on the once vacant property, and there is much more in store in the coming months.

Nye County commissioners, sitting as the governing board for the town of Pahrump, recently awarded another contract for the development of Kellogg Park and the next element to adorn the land will be a series of dog parks, one for small, another for medium and a third for large canines.

The dog park contract went before the commission during its Tuesday, May 18 meeting and with just one bid submitted, which came in under the budgeted amount for the project, the board’s choice was an easy one. However, there were some concerns expressed regarding the rapidly rising costs associated with the construction industry, although town buildings and ground manager Jimmy Martinez assured that he did not anticipate that this would be an issue moving forward.

It was Nye County Commissioner Frank Carbone who voiced said concerns, remarking, “Just between the time that this bid was made, almost another 20% (in costs) went up, just in the last two weeks. Just a word of caution.”

Martinez replied he was well aware of the increasing costs of construction materials but he said harbored no fears that this would impact the dog park project, remarking that Morales Construction was ready with stockpiled materials. “Everything is on track,” Martinez stated.

“Can you make sure we are apprised of any change orders on this?” Nye County Commissioner Leo Blundo requested of Martinez, who said he would ensure commissioners were aware of how the project was proceeding.

Blundo then made the motion to award the contract to Morales Construction in the amount of $294,975. Carbone seconded the motion which passed 4-0 with commissioner Donna Cox absent.

This marks the fifth construction contract awarded in pursuit of the development of Kellogg Park, a project that had been on the table for roughly two decades and which finally saw its start three years ago.

A formal groundbreaking ceremony for the new park was held in May 2019, with grading, grubbing and clearing then performed by Wulfenstein Construction at a cost of $549,000.

This was followed by the installation of lighting and electrical infrastructure, a task performed by Industrial Light and Power for $408,000. The electrical work was completed in March 2020.

By November 2020, commissioners had awarded yet another contract for the project, that for concrete curbing and gutters in the amount of $143,000. That contract went to Morales Construction, as did the next contract, for the construction of the restroom facilities, a portion of the project that came with a price tag of $419,032 for both the restroom and on-site wastewater and sanitary sewer systems. With the awarding of the dog park contract, also to Morales Construction, approximately $1,814,000 has been invested into the development of Kellogg Park to date.

As detailed in the bid package provided by Morales Construction, the dog park project will include the erection of chain link fencing and the installation of three single-swing gates as well as three double-swing gates, along with grass sod, piping and sprinkler systems to keep the sod fresh and green, control valves and a three-month warranty on the sod. The company will have 60 calendar days from the notice to proceed in which to complete the dog parks.