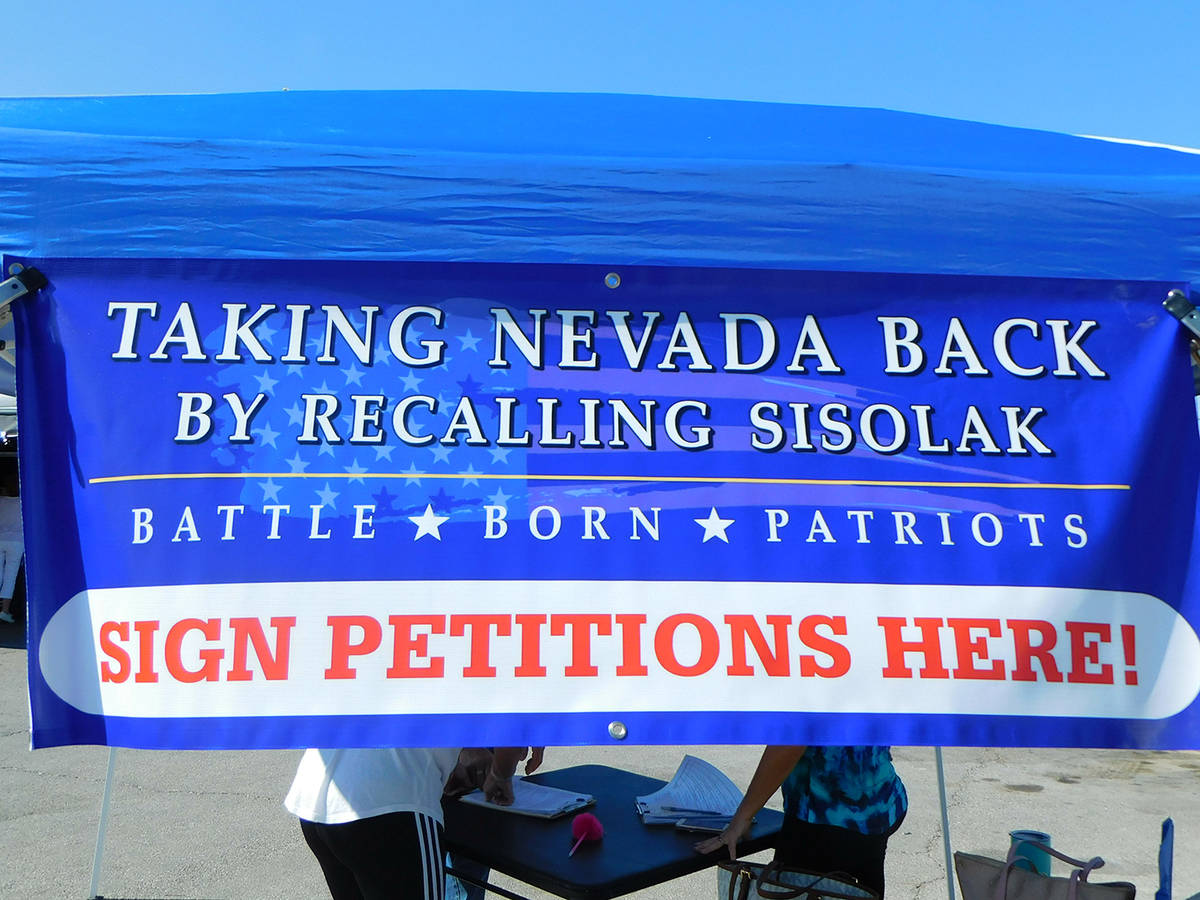 Robin Hebrock/Pahrump Valley Times Battle Born Patriots' attempt to recall Nevada Gov. Steve Sisolak was unsuccessful but the political action committee itself will live on, with the goal of monitoring political issues in the state. 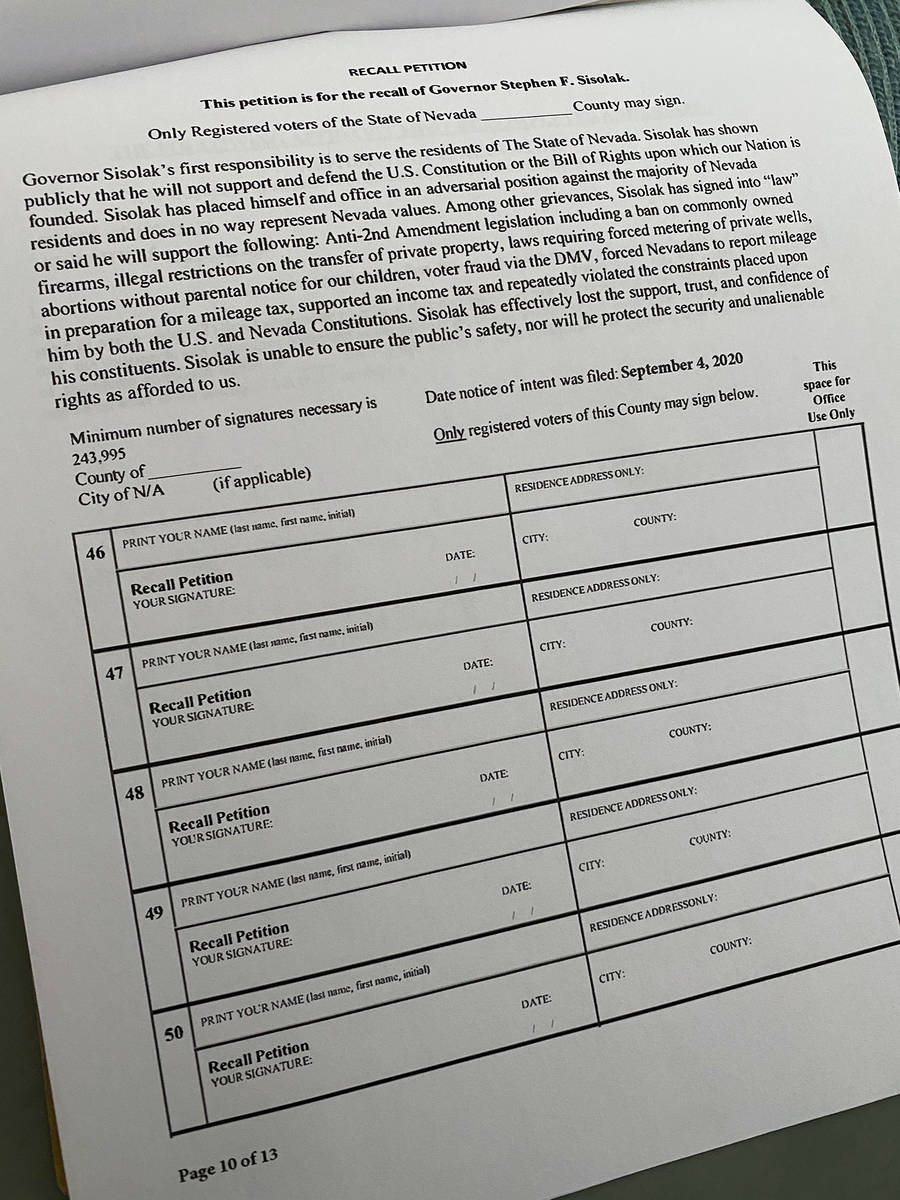 After three full months of striving to successfully push through a recall of Nevada Gov. Steve Sisolak, Battle Born Patriots has announced that its effort has officially failed.

Formed in late August of this year following the failure of another recall effort aimed at removing the governor from office, Battle Born Patriots filed its notice of intent to recall with the Nevada secretary of state on Sept. 4 and immediately began seeking signatures of voters who had participated in the 2018 general election in Nevada, the only signatures acceptable by law to support the recall. By the halfway point in October, the group had collected over 31,000 signatures but it still had a very long way to go to reach the nearly 244,000 signatures required to make the recall a success.

As the group’s Dec. 3 deadline approached and the signature count simply wasn’t high enough, Battle Born Patriots then turned to its legal options. On Nov. 25, a news release from Battle Born Patriots announced that the group would attempt to secure an emergency injunction for an extension of the recall effort and it established a GoFundMe account to help raise the funds necessary to pay for legal representation.

The political action committee was hoping to file in federal court and build off of a decision made by a Superior Court judge that allowed additional time to collect recall signatures to a California-based group seeking to recall that state’s governor.

“This last-ditch effort to save the recall… will either be successful or it may fail, but it’s worth their time to try,” the news release stated.

As of Dec. 4, Battle Born Patriots had accepted its defeat, issuing another news release to announce that its recall effort was officially over.

“BBP attempted to raise much-needed funds to hire attorney Marc Randazza to file an emergency injunction to continue the recall of Governor Sisolak,” the release read. “Due to California’s latest win on their recall of Governor Newsome in federal court, attorney Marc Randazza’s advice to BBP as a federal court case, ‘The judge would push it back down to state or circuit court, blocking BBP from using CA’s latest federal decision.’ With that legal advice plus the signature count wasn’t strong enough, donations didn’t reach our goal of $50K, therefore Battle Born Patriots had to concede.”

Battle Born Patriots cited a couple of specific reasons for its failure, noting that media coverage and Sisolak’s actions throughout the pandemic both hurt the recall effort.

“Media was a huge factor in impeding the recall efforts,” the release stated. “Once notice of intent was filed on 9/4/20, only one newspaper published the recall, the Pahrump Valley Times. All northern Nevada media from newspapers, radio and television blocked out the filing and the recall, for the exception of Monica Jaye’s radio show.”

As the recall effort continued to move forward, Battle Born Patriots said other media sources began to cover it as well, writing, “When the media helped, it showed.”

As to Sisolak’s emergency mandates and restrictions due to COVID-19, Battle Born Patriots asserted, “Sisolak’s constant roadblocks hindered the effort as well.” A large signing event Las Vegas was shut down by OSHA and the group said many businesses and individuals were afraid that if they joined in the effort or showed support for it, they would see repercussions.

According to Battle Born Patriots Director of Marketing and Media Dee Mounts, who led the signature drive efforts in Nye County, a raw count by the group showed that 58,944 signatures were collected overall statewide.

Just because the recall effort is at an end doesn’t mean that Battle Born Patriots itself is a thing of the past, however. The political action committee said it has no intention of dissolving but instead will continue on with some new goals in mind.

“Battle Born Patriots will not disband. The logo (reading Taking Nevada Back by Recalling Sisolak) will drop ‘by Recalling Sisolak’ and in turn will focus on Nevada’s political issues and that includes being a Sisolak watchdog,” the Dec. 4 news release explained. “From assembly and state bills to political candidates, or voter fraud and the state constitution, BBP will be there for the voters. The organization begins after a well-deserved rest for all volunteers and leadership.”

The group also made sure to thank its volunteer force, which dedicated its time and energy to the cause.

“Dedicated volunteers throughout the state made this mission a great one. Their tireless work to collect signatures really made the recall worth it. BBP worked long hours, through weather conditions, through uncooperative residents against the recall and yet, still collected as much as possible. Gratitude begins with all volunteers,” the release stated.

For more information on Battle Born Patriots contact Mounts at BBPNyeLead@gmail.com or call 702-408-7062.