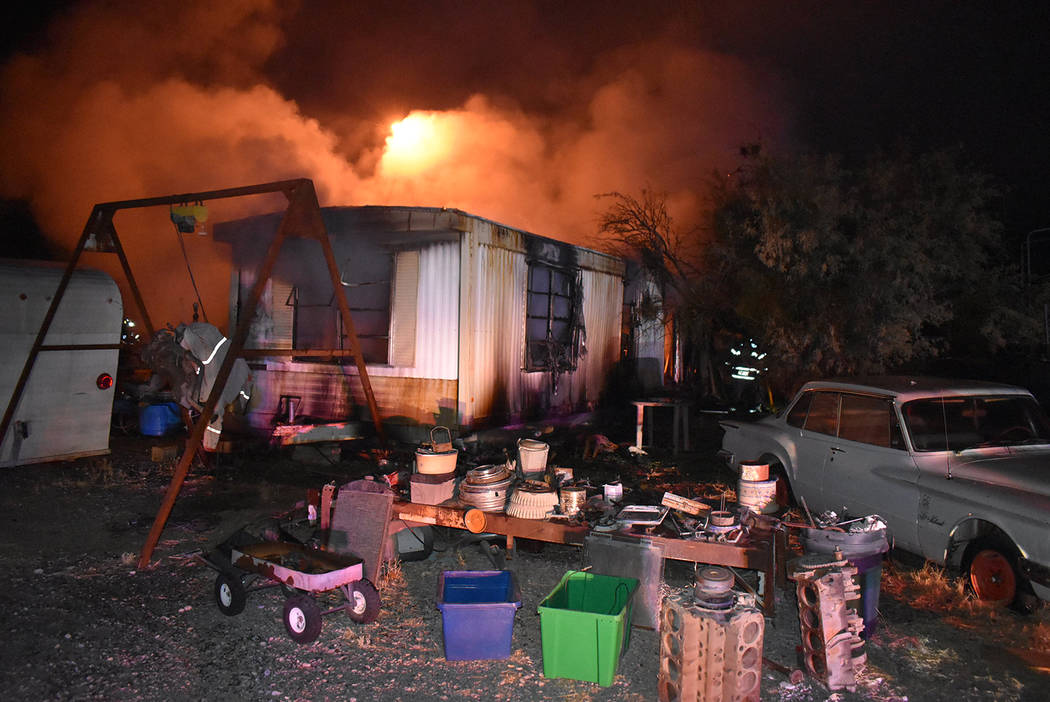 Special to the Pahrump Valley Times An unauthorized controlled burn was the cause of a structure fire along North Murphy Street address just after 8:30 p.m. on Monday evening Nov. 11. No injuries were reported, according to Pahrump Fire Chief Scott Lewis. 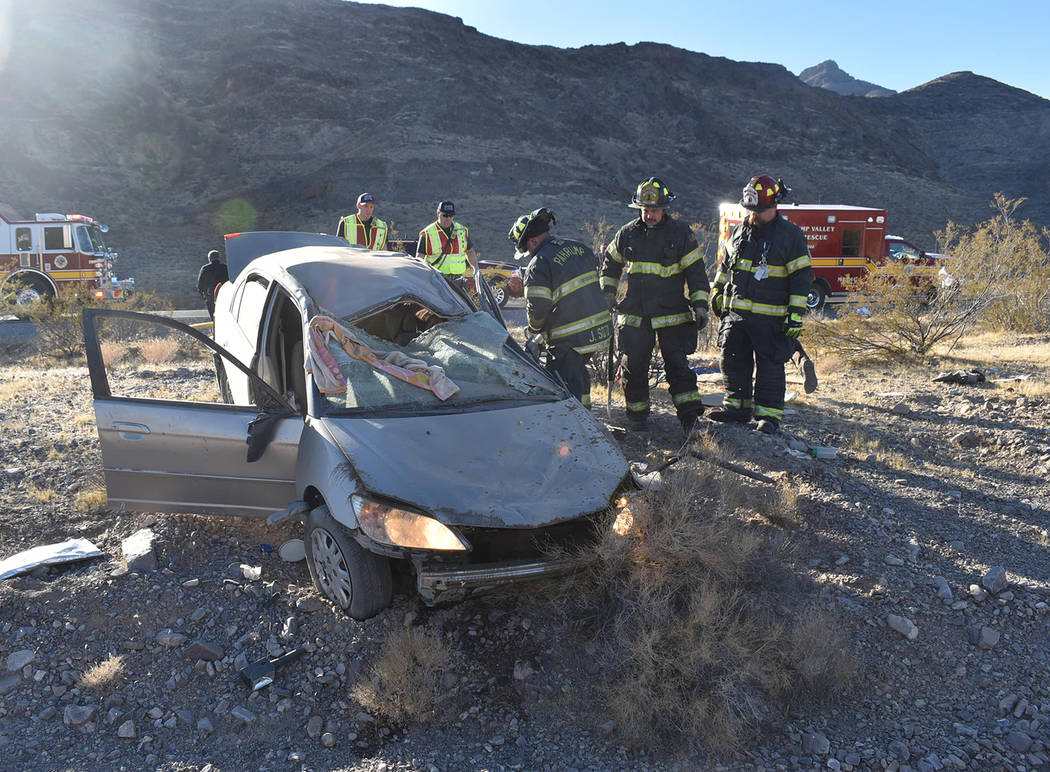 Special to the Pahrump Valley Times One person was flown to University Medical Center in Las Vegas, following a single-vehicle rollover crash along Highway 160, near Nye County mile marker 20, on Tuesday Nov. 12 at approximately 2:30 p.m. 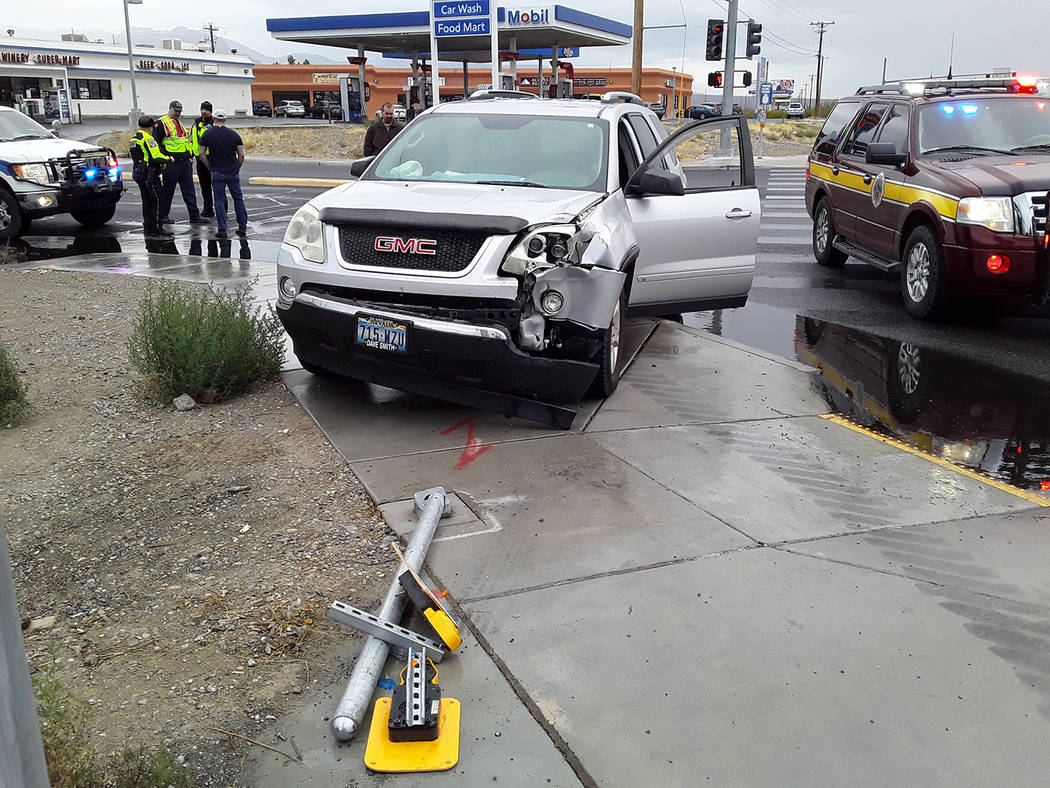 Selwyn Harris/Pahrump Valley Times One person was transported to Desert View Hospital following a single-vehicle crash at the intersection of Highway 160 and Winery Road just after 10 a.m. on Wednesday Nov. 20.

A Pahrump residence was destroyed after an individual attempted to burn dry brush on Monday evening, Nov. 11.

“Crews arrived and found a well-involved single-wide manufactured dwelling with extension to nearby exposures of personal property and vehicles,” Lewis said. “Crews commenced a defensive exterior attack, due to the fire load within the structure. The fire was quickly controlled with no further extension to the other exposures in the immediate area and there were no injuries. The fire was a result of an unauthorized controlled burn.”

The following day, fire crews were dispatched to a single-vehicle crash where the driver was subsequently flown to University Medical Center in Las Vegas.

“Crews arrived to find a single-vehicle accident with a rollover type mechanism. The vehicle was resting upright with the driver entrapped,” Lewis said. “Crews commenced extrication and removed that patient. It was determined that the injuries were consistent with trauma. Mercy Air 21 was added to the assignment where a landing zone was established on Highway 160. Patient care was transferred to Mercy Air crews, and that patient was flown to University Medical Center Trauma.”

On Saturday, Nov. 16, first responders were dispatched for a report of a motor vehicle accident in the area of Pahrump Valley Boulevard just north of Thousandaire Boulevard.

On Sunday, Nov. 17 at approximately 11 a.m., fire crews were dispatched for a report of a structure fire along the 400 block of East Blosser Ranch Road.

“Crews arrived to find a rooftop fire in the area of the electrical service panel, that being the feeder line running from the power pole to the mast that was affixed to the top of the roof of the structure,” Lewis said. “The fire was quickly extinguished, at which point two people were observed running away from the residence.”

Lewis went on to say that crews notified the Nye County Sheriff’s Office, who later were able to locate one and take the individual into their care and custody.

“While checking for exposure, the resulting investigation determined that there was a large marijuana grow facility within the structure,” Lewis noted. “The Nye County Sheriff’s Office is investigating.”

One transported after vehicle crash

On Wednesday, Nov. 20 crews responded to the intersection of Winery Road and Highway 160 for a vehicle, which struck a light standard just after 10 a.m.

“As a result of the collision, it took out a new control post that was recently installed by Nevada Department of Transportation crews for a pedestrian crossing control,” Lewis said. “One patient was transported to Desert View Hospital.”

Chief Lewis also provided a bit of advice for motorists and pedestrians, as rains arrived in the valley this week.

“As wet weather descends upon the Pahrump Valley, the roads are slippery, so it’s advisable for drivers to take it easy when they’re out on the roads,” he said. “It hasn’t rained for quite a period of time. The oil on roadways rises to the surface and creates slick spots, so drivers should give themselves additional braking time, and make no hard acceleration or turns. In the event you don’t have good functioning windshield wipers, please make sure that is taken care of immediately.”

Lewis also advised motorists what to do if they observe standing water along area roadways.

“Any instances of standing water that you see, should be reported to the county, so they can get the appropriate road signs up and make notifications for any drainage issues,” he noted. “Drivers should avoid taking their vehicle onto the shoulder of the road with the type of rain we will be having because their vehicle will likely become stuck very quickly.”

Motorists aside, Lewis provided advice for pedestrians and those with certain medical issues.

“When you’re walking, make sure that you have good footing, and wear appropriate footwear so you don’t fall, whether on steps or floors,” he said. “There is also the tendency of some individuals who have ongoing respiratory issues, as the moisture in the air can sometimes exacerbate that. Make sure that you have your appropriate medications available. If you start having respiratory difficulties, call 911 immediately.”