Selwyn Harris/Pahrump Valley Times Carmen Murzyn prepares to sing the classic Carpenter's song, 'We've Only Just Begun.' Murzyn said she joined with Rogers and Twilight Productions, to to get over her stage fright. Her performance was very well received during the event. 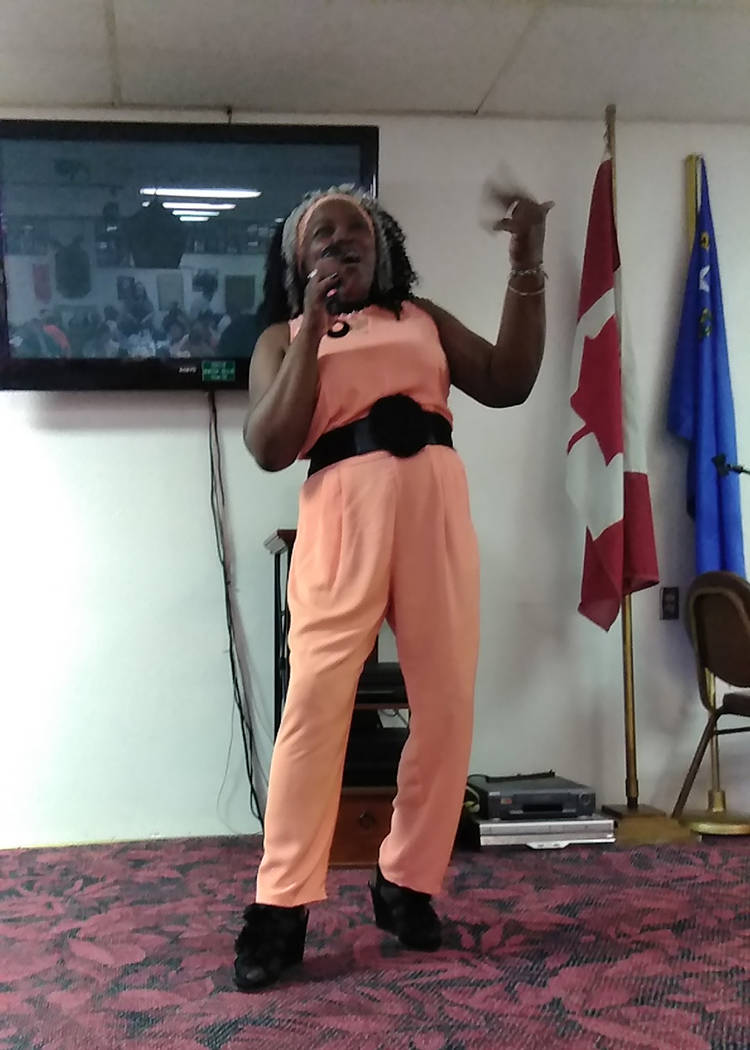 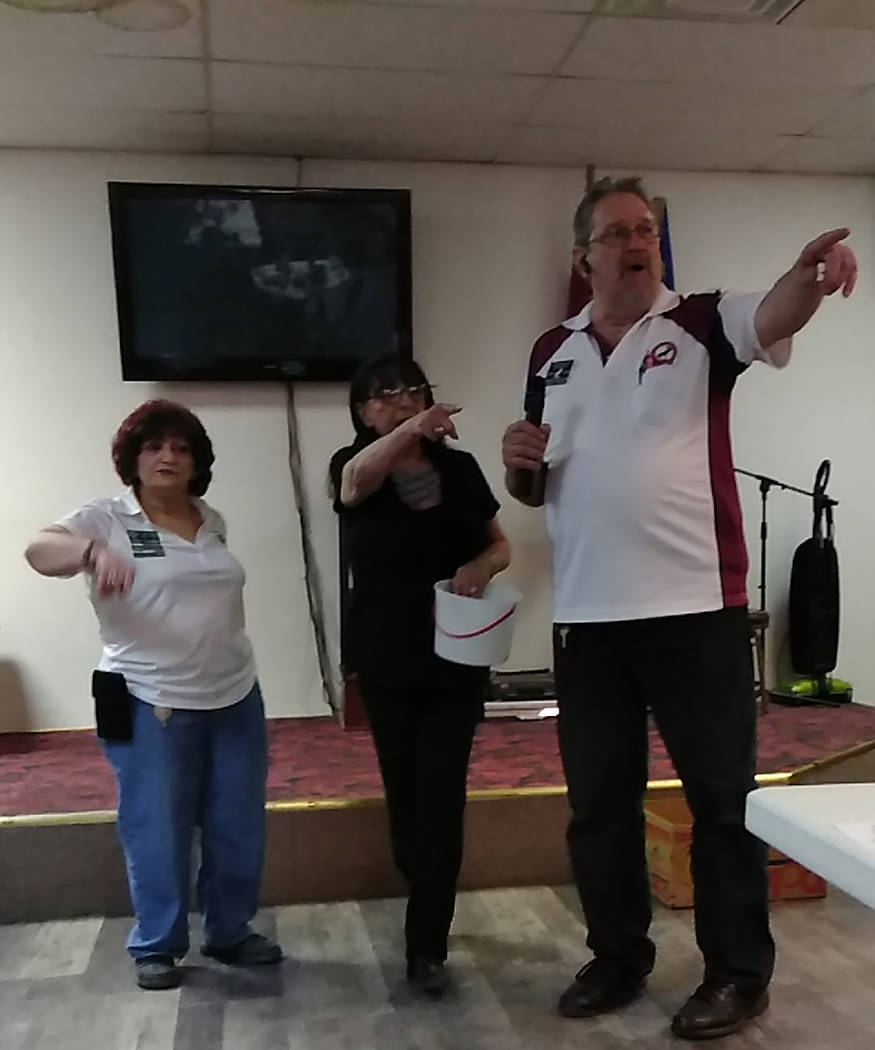 Selwyn Harris/Pahrump Valley Times Pahrump Moose Lodge Governor Tom Trzcinski, right, is joined by Pahrump Senior Center Site Manager Anne Blankenship, center as they look for the winner of the raffle portion of the fundraiser. Both are joined onstage by Trzcinski's wife, Woman of the Moose Officer and Sr. Regent Maria Trzcinski.

There was no shortage of food or entertainment at the Pahrump Moose Lodge as members hosted a spaghetti dinner fundraiser for the Pahrump Senior Center.

Lodge Governor Tom Trzcinski said he was quite pleased with the turnout on Sunday evening, March 3rd.

Over the years the Moose Lodge has played a crucial role in raising funds for numerous local organizations and agencies, including Nye County Search and Rescue and the local Disabled American Veterans, along with the Pahrump Valley High School Key Club and the Pahrump Disability Outreach Program.

Members of the Key Club actually served the dinners.

“We were able to raise a good amount of money for the Pahrump Senior Center,” Trzcinski said. “It’s all for a good cause. We also had a lot of great entertainment as well. It was nice to have a little different kind of entertainment for a change. Next month we’re doing one for Search and Rescue, which is another great organization that we always do one for.”

The entertainment Trzcinski spoke of was provided by Pahrump’s Twilight Productions, LLC, owned by Teri and Don Rogers.

“We are going on our fourth year with Twilight Productions,” Teri Rogers said. “We are all local entertainers and all of us are seniors. We basically just volunteer to do all of these kinds of events where we can help raise money for the various organizations here in town. We do the Moose Lodge quite often because I teach line dancing there. I like to let them know that we are also there to help.”

Joining Rogers for the entertainment were several area vocalists.

“The first time I sang was two years ago when I got into the Ms. Senior Golden Year’s Pageant,” Murzyn recalled. “I didn’t know what I was getting into, but I had to sing a song and I was a nervous wreck. When I got up on stage, I even forgot the words, so I had to make up the words. This year I joined with Teri and Twilight Productions, so I could try to get over my stage fright.”

Also on the entertainment bill was Mary McRory, who said she began singing decades ago.

“I’ve been singing for most of my life,” she said. “In the mid-1990s, I was in a backup blues band in Monterey, California. The last three years, I got more serious about singing and I’ve been taking lessons in Las Vegas from a great teacher who was part of Legends in Concert for 24 years, where she played Judy Garland. That’s been a lot of fun and we’re good friends now. As far as who inspires me musically, I do like a lot of Ella Fitzgerald, Natalie Cole. I also love R&B and soul music, as well as jazz.”

“I’m really inspired by Barbra Streisand, but I listen to every kind of music,” she said. “I also like Aretha Franklin, and I performed ‘Baby I Love You,’ by Aretha Franklin and ‘Private Dancer,’ by Tina Turner. I used to do a lot of karaoke, but now I’ve cut back.”

The ole song and dance routine

Rogers, meanwhile, did double-duty as she led a group of line dancers as well as performed the song “Oh Susanna,” all while dancing in Kangoo Jump Shoes.

Also enjoying the entertainment was Pahrump Senior Center Site Manager Anne Blankenship, who was beyond grateful for the fundraising effort.

“We would like to thank the Pahrump Moose Lodge for sponsoring the spaghetti dinner fundraiser for our Meals on Wheels program,” Blankenship said. “We also want to give a big thank you to the Ladies of the Moose for their donations of baked goods and of course to Twilight Productions for the entertainment. The Meals on Wheels program is so vital to our homebound seniors because they do not get the opportunity to visit the center and participate in our daily lunches and socialize. Many of them also live alone. The Moose Lodge has been sponsoring this event for many years and it has always been one of our favorites.”

Senior Center Director Ann Blankenship is the spouse of the author of this story. Contact reporter Selwyn Harris at sharris@pvtimes.com, on Twitter: @pvtimes