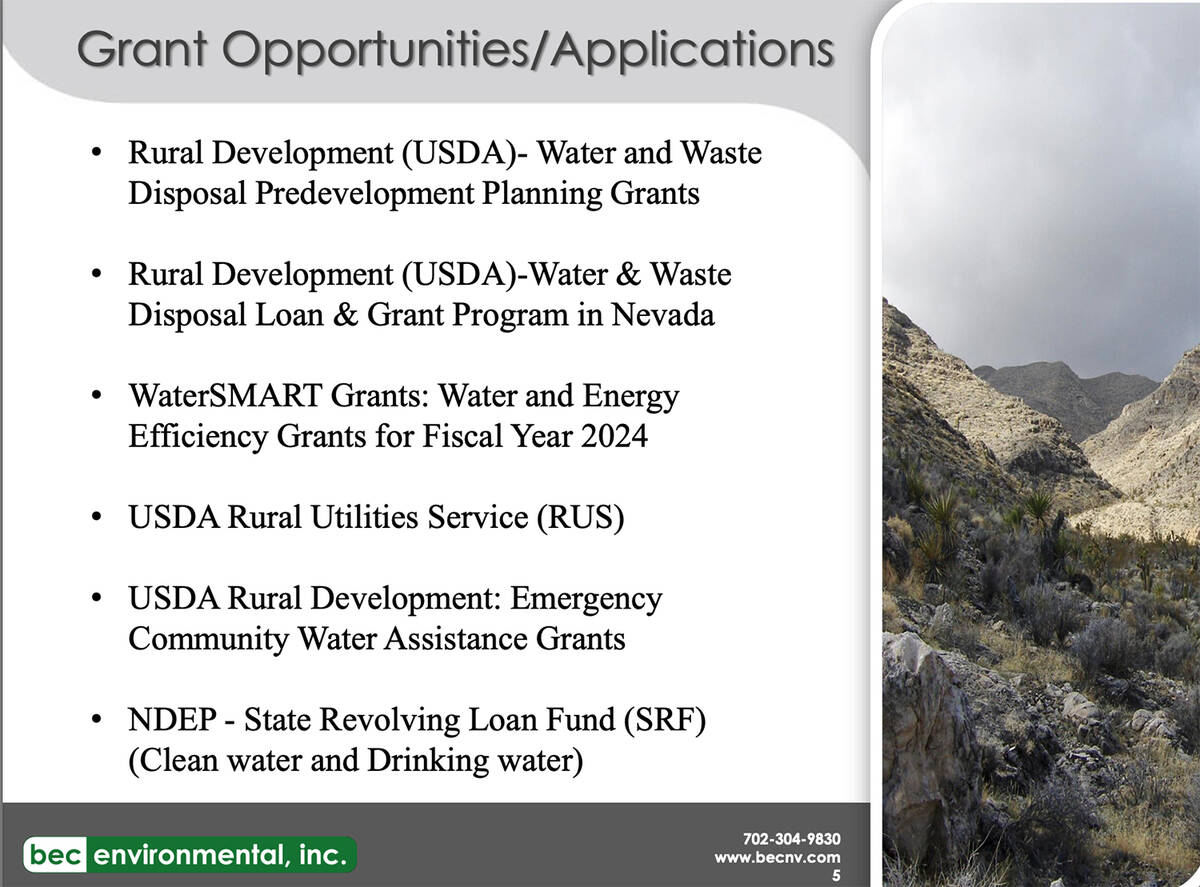 Special to the Pahrump Valley Times Included in the presentation given by BEC Environmental in July, this slide shows a few of the funding options that the Nye County Water District may be able to pursue in the future.

Eileen Christensen, president and principal of BEC Environmental, went before the water board last month to offer her company’s services to assist with the board’s desire to identify potential grants.

“We are an environmental consulting group that has a multi-discipline team. We were established in 2002 and our first client was actually Nye County, developing a brownfields grant,” Christensen explained, noting that since its inception, her company has secured about $17.1 million to support various programs in Nye County and elsewhere in the state.

She turned it over to Amberlee Mahaffey, who said she was aware of a variety of different grants that are available on a yearly basis that could be a good fit for the district, as well as many others that have recently become available due to federal acts. There are even revolving loan funds that could also be secured, Mahafeey said.

“Many of these things are open to you. It’s just a matter of understanding what exactly you are looking for,” Christensen remarked. “I know that you are still a new board and you are still forming but it sounds like you are moving in a positive direction and as you have the need, we would love to be able to service what those needs are.”

Water board member Michael Lach noted that he invited Christensen to make the presentation. He said he was familiar with her and had watched her secure monies for a wide array of projects. This was a skill he felt could be very beneficial to the water district.

“At this point in time, the federal government has been throwing money to the states and to a lot of projects,” Lach stated. “And I think we would be remiss, when looking at our budget of approximately $300,000 a year, not to go after additional funding for a number of things we could direct them to go look for. Because with $300,000 a year, we’re not going to be able to do anything major with the monies we have.”

Christensen was back before the water board on Aug. 9 with a Master Services Agreement up for consideration, along with what would be the first work order under that contract. She emphasized that while there are obviously grants the water district may wish to seek on their own behalf, there are others that have already been or will be awarded to entities that the water district could then work with in utilizing those funds. She and her team would be striving to bring all those options to the water board’s attention.

Water board member Bruce Holden said he believed it would be best to hold off on approval of the contract until the board is able to create a list of potential project ideas, adding that this would give BEC some definitive direction.

Lach, however, asserted that this was BEC’s area of expertise, stressing that their team is much more equipped to find pertinent grants than the board members would be. Water district general manager Dann Weeks said that BEC would be compiling such a list and would bring it to the board for its prioritization, which would then give the board a better idea of just what it can do in terms of programs and projects.

When Holden continued to press his point, Lach interjected that grants are time-sensitive so he wanted to move forward immediately. He made the motion to approve the Master Services Agreement, as well as work order No. 1 with a not-to-exceed amount of $8,900. That motion passed with all in favor.