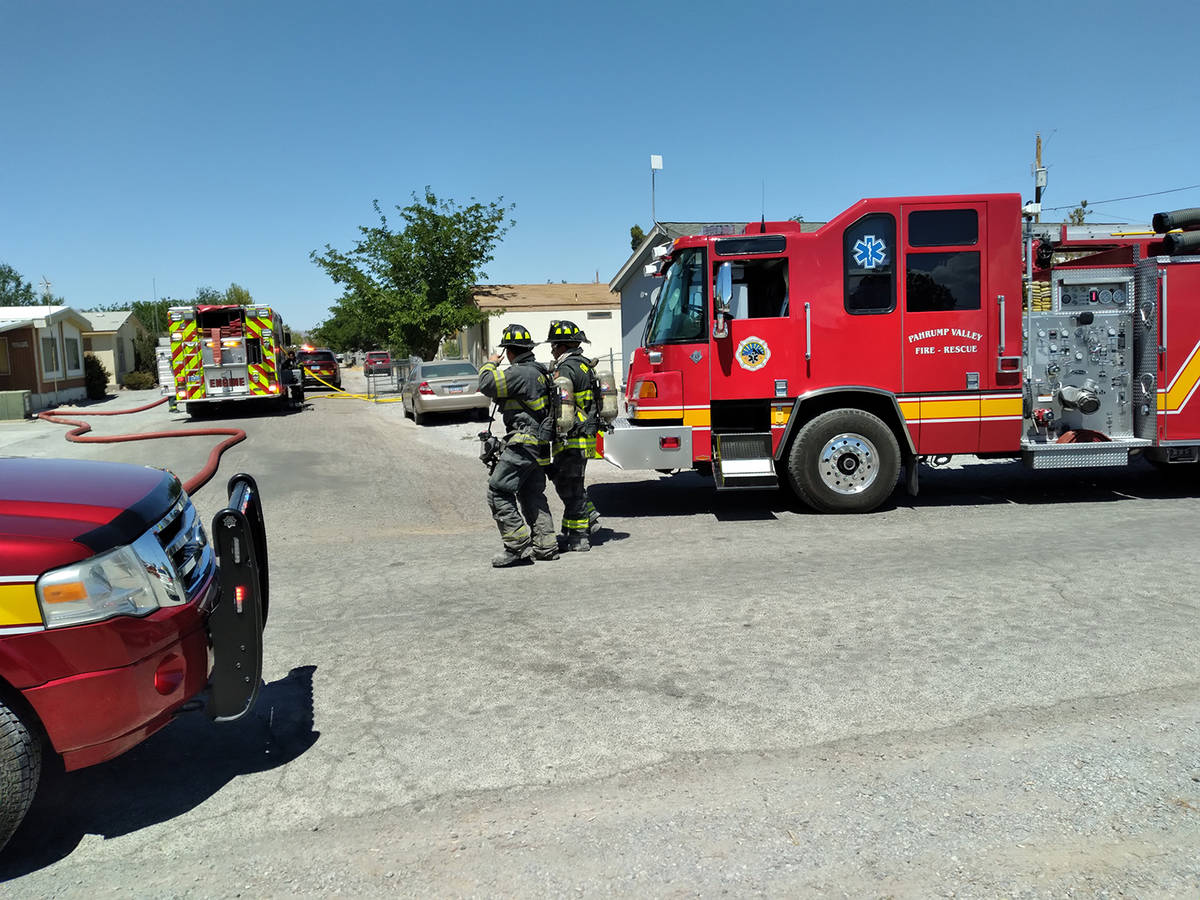 Selwyn Harris/Pahrump Valley Times No injuries were reported following a structure fire on Vegas Valley Drive in the Comstock Park community on Friday, June 25. Though the home was not occupied at the time, firefighters and an animal control officer managed to rescue a cat on the property.

One person was transported to UMC Trauma following what was described as an explosion at a local hemp production facility on Friday, July 2.

“We were dispatched for a report of a burn victim,” he said. “Initially, it was a single resource response but then we were informed there was a possible explosion and the involvement of chemicals. Eventually there was a report that there was possibly ethanol in the facility that caused the explosion.”

Lewis also said the response was upgraded accordingly by adding additional engine companies, along with a medic unit upon arrival.

“The engine one crew found that there was nothing showing from the exterior, but they did have a burn victim,” he noted. “The burns were significant enough to warrant flight to the UMC Burn Center, where we added Mercy Air- 21 to the assignment. Patient care was transferred and that patient was subsequently flown out.”

Lewis went on to say that the initial investigation revealed there was a flash-fire type incident within the structure, which prompted the response of the deputy state fire marshal, along with other personnel.

“We had numerous different agencies and different directors from within the county that are assisting in the investigation,” he said. “We did have to bring our Hazmat crew in for a spill of some ethanol product which was quickly cleaned up without incident, and there were no other injuries.”

Though there was no significant structural damage, Lewis said the incident was a brief, but impactful event.

“We came in and took care of that event in a very timely manner and made sure the atmosphere within the structure was safe for our firefighters to operate, and we are now in the investigative phase.”

On Friday morning, June 25, fire crews responded to a report of a structure fire on Vegas Valley Drive in the Comstock Park development.

Lewis said as crews arrived, they found smoke and active fire showing on the back side of the structure.

“Crews immediately went into an offensive objective, meaning that they were going into the interior,” he said. “They laid a supply line, which means they brought water from a hydrant to the engine where they utilized attack lines from there.”

Additionally, Lewis said as crews went in, they found fire at the rear of the interior of the structure.

“They quickly controlled that fire, and there were no occupants inside the structure, but they did rescue a cat, and it was turned over to a guardian who is a relative of the person who resides there,” he said. “We believe the fire originated on the other side of the structure to the rear, possibly an electrical cause. That is our initial impression and we are investigating it further. No injuries were reported.”

Comstock Avenue was closed to traffic between Russell Road and Wilderness Way while crew worked to extinguish the fire.