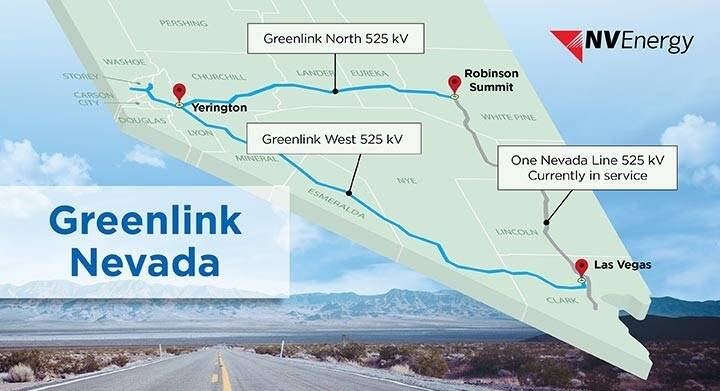 The Bureau of Land Management began its federal review of the proposed Greenlink West Transmission project on May 1.

The project will run from Las Vegas to Reno through Clark, Nye, Esmeralda, Mineral, Lyon, Storey and Washoe counties, according to the BLM website. It would be built on 13,767 acres of land.

The transmission line will impact habitat for the desert tortoise, Bi-state sage grouse, pronghorn, golden eagle and numerous other species, according to Basin and Range Watch, a nonprofi that advocates for conservation of deserts in Nevada and California.

Several microwave towers, new roads and associated facilities would be added to the landscape, the nonprofit said. The project would be built inside the border of the Tule Springs Fossil Beds National Monument and impact several paleontological sites.

About 230 square miles of large-scale solar applications have been filed in association with the Greenlink West Transmission Project to date.

These applications are adjacent to Death Valley National Park, and next to the ghost town of Rhyolite, on desert tortoise habitat, on pronghorn breeding habitat, on Joshua tree habitat, on several archaeology sites and adjacent to small communities like Beatty that depend on tourism for their economy, Basin and Range said.

The line will hook into natural gas plants at Apex and eventually transport power north to large tech factories in the Reno area.

“This transmission project will open up the Pandora’s Box-style land rush of massive energy proposals that will permanently destroy natural and cultural resources in the state,” said Kevin Emmerich, co-founder of Basin and Range Watch. “Green energy is least destructive when used on previously developed sites and urban areas.”

The scoping period for the Greenlink West Project will be 30 days long.

You may submit comments or resource information related to the project by any of the following methods: