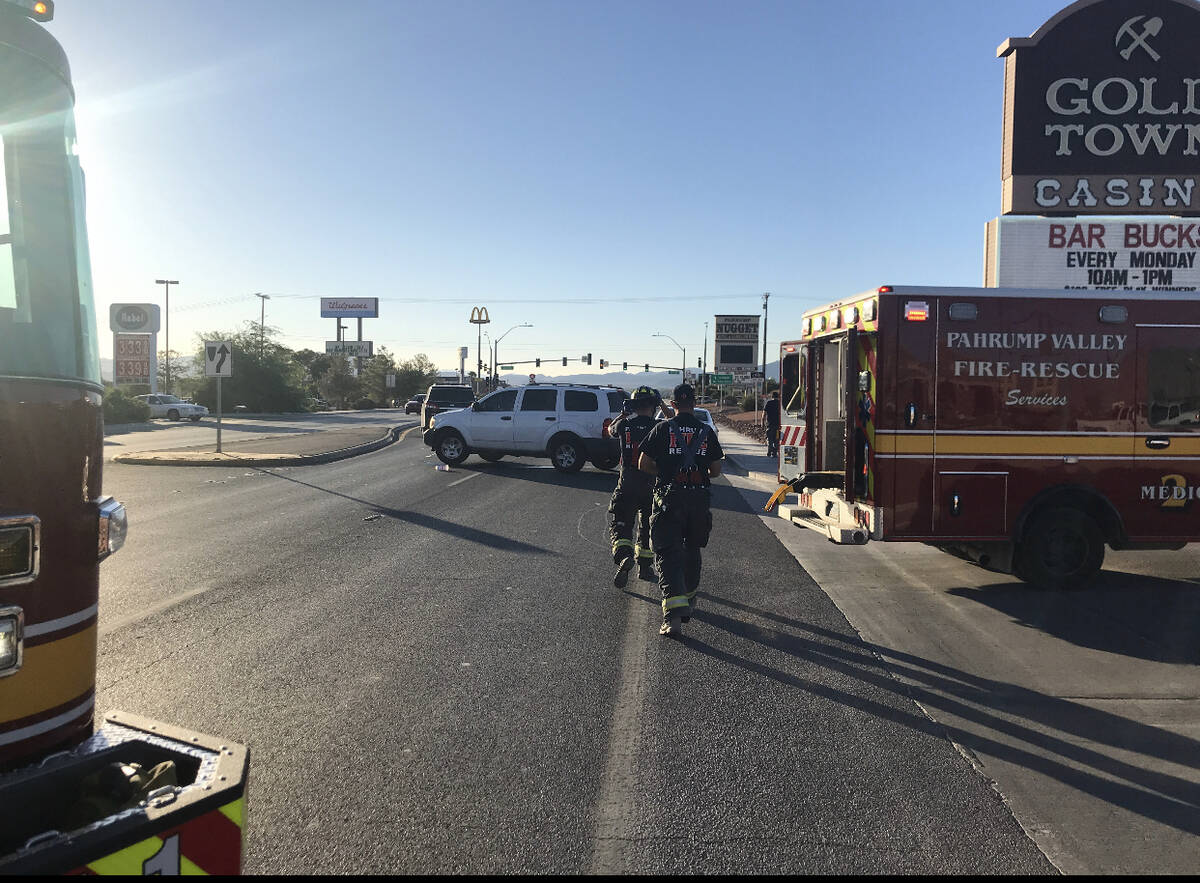 Nye County Sheriff's Office (Facebook) On Friday, Sept. 3, emergency crews were summoned to Highway 160 in front of the Gold Town Casino for a report of a pedestrian being struck by a vehicle at approximately 6:03 p.m.

On Saturday, Sept. 4, emergency crews were dispatched to an area residence for a possible drowning, just after 7:30 p.m., where on arrival, medics found a female patient who had been removed out of a spa, but was unconscious and unresponsive.

“The female was found extricated from the water and crews immediately performed life-saving measures,” Lewis said. “We found that the patient was not breathing, and was in cardiac arrest. We performed life-saving measures, got her pulses back, and rapidly transported that patient to the local hospital, and it’s our understanding that the patient was subsequently transported to Las Vegas.”

The unidentified woman’s condition was not known by press time.

On Friday Sept. 3, emergency crews were summoned to Highway 160 in front of the Gold Town Casino for a report of a pedestrian being struck by a vehicle at approximately 6:03 p.m.

“Upon arrival, crews found the accident as described with significant injuries sustained to the pedestrian,” Lewis said. “That person was transported by ground to the local hospital, as Mercy Air was on other calls.”

Later that evening, crews were dispatched to another vehicle versus pedestrian collision at approximately 10:30 p.m. along Highway 372 and Bolling Road.

“Crews have arrived on location and found a bicyclist off of the roadway,” according to Lewis. “It was unknown exactly what the circumstances were surrounding the injuries sustained to that patient, who was transported to the local hospital.”

On Thursday Sept. 2, fire crews were dispatched to the area of Highway 372 and Barney Street for a serious two-vehicle crash just after 4 p.m.

Upon arrival, crews found that vehicle accident as described with one of the vehicles well off of the roadway.

Lewis said the scene size-up and risk assessment revealed no entrapment, however, there was at least one person who was transported to the local hospital.

Later that day, crews responded to a motor vehicle collision involving a burro in the roadway in the area of Highway 160 and Park Retiro on the north end of Pahrump.

“Upon arrival, we found that the car had sustained significant damage to the front end,” Lewis noted. “The burro was pronounced deceased at the scene, and three people were medically assessed, but did not require transport.”

On Wednesday, Sept. 1, fire crews responded to a report of a head-on collision in the area of Highway 160 and Blosser Ranch Road at approximately 7:23 p.m.

“It was a significant impact, head-on collision, and while there was no entrapment, there were several injured persons, and three people were transported to the local hospital,” Lewis said. “Simultaneously, within seconds of each other, we received a report of a second significant motor vehicle accident in the area of Homestead Road and Thousandaire Avenue. Mercy Air crews arrived on location and found the two-vehicle accident with extensive damage to both vehicles. The scene size-up and risk assessment found no entrapment, however, there were at least two injured, where one refused medical treatment, and the second was transported to the local hospital.”