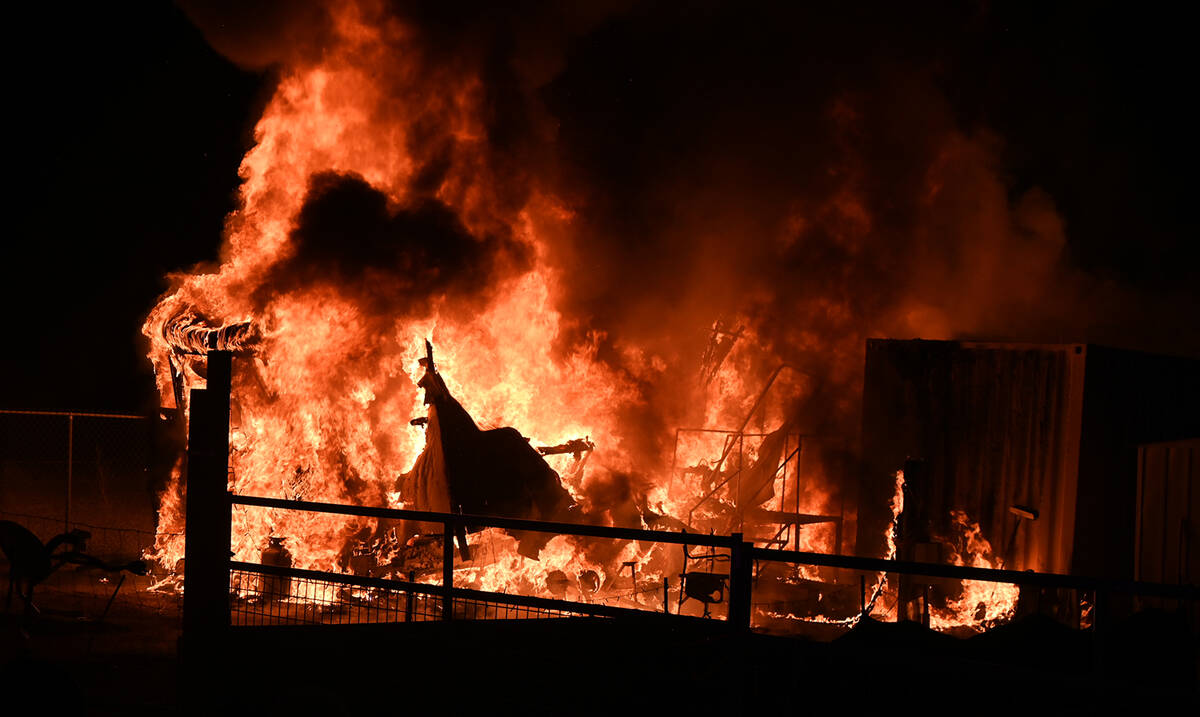 Special to the Pahrump Valley Times One person has died following a structure fire along the 4000 block of Ashley Avenue late Tuesday evening Dec. 28. Pahrump Valley Fire and Rescue Services Chief Scott Lewis said though the preliminary investigation is underway, the cause of the fire appears to be accidental in nature.

A structure fire has claimed the life of a local man.

The fire broke out at a residence on the 4000 block of East Ashley Avenue at approximately 11:30 p.m. on Tuesday, Dec. 28, Pahrump Valley Fire & Rescue Services Chief Scott Lewis said.

The area did not have fire hydrants, Lewis said, which challenged fire crews who were forced to transport water to the scene.

“Our response was amended to bring the additional water with us on our apparatus,” Lewis said. “As crews were responding, we observed a large glow in the sky so we pretty much knew we were going to be going to work. We just simply didn’t know what kind of structure it was at the time. As we were responding, we were receiving additional reports of some type of travel-trailer that was well involved with numerous exposures.”

Lewis said crews formulated a plan at the site in order to fight the fire.

“We arrived on location and confirmed a working structure fire with the fire fully involved,” he said. “There was an exposure Conex container as well as additional travel-trailers and a primary dwelling. The initial report of someone who may have been unaccounted for ended up being with merit and during our primary search after the fire was placed under control, we in fact located a person who did not survive the fire. This was a high-risk fire from the standpoint that there were no nearby hydrants.”

Crews were exposed to discharging ammunition, Lewis said, and a venting propane tank at the rear of the trailer that was “whistling.” It potentially created a situation known to fire crews as “BLEVE,” which stands for Boiling Liquid Expanding Vapor Explosion.

“That is a very, very dangerous situation to firefighting, as well as neighbors and the other exposure structures, so crews quickly commenced a defensive exterior attack and cooled that tank down as it was the first priority,” Lewis said. “The second line was direct fire suppression and exposure protection and all of that was completed in short fashion. Once the primary search was completed, that’s when we found that a person was unable to exit out of that structure.”

Lewis immediately called for backup from sheriff’s office detectives as well as the State Fire Marshal’s Office, where a deputy state fire marshal responded from Fallon as Pahrump crews held the scene overnight.

“We also had to continuously suppress the fire that kept re-igniting in the Conex container,” Lewis said. “Crews did a good job containing that fire to those two areas, and there was no further extension to the primary dwelling or the nearby travel-trailers that were also used as fixed residences.”

The investigation is underway into the cause, Lewis said, but preliminarily findings indicate the fire was accidental.

“Most likely, it will be undetermined due to the extent of damage, but we’re unable to rule out the probability that space heaters may have contributed to the ignition of the fire,” he said

The identity of the victim is being withheld pending notification to any potential family members.

The fire is one of several fatal structure fires in recent weeks.

“It reminds us how dangerous not only this season is, but just activities, such as the use of space heaters and other ignition sources,” Lewis said. “You want to make sure that your egress routes are sound and you have a plan in place in the event that something does happen. You also want safe places on the outside so everyone knows that you’re safely out. Most of them are preventable, and a better and more prepared reaction would certainly help.”

“We reinforce that in October during Fire Prevention Week, but clearly we are finding too many residences that have either the smoke detectors removed, or the battery trays are open, so there’s no secondary notification,” he said. “Please check them or install new ones. If you don’t make sure everything’s operating properly, it could be the difference between life and death as we have seen, and we’ve seen way too much death in the last several weeks in Pahrump alone.”