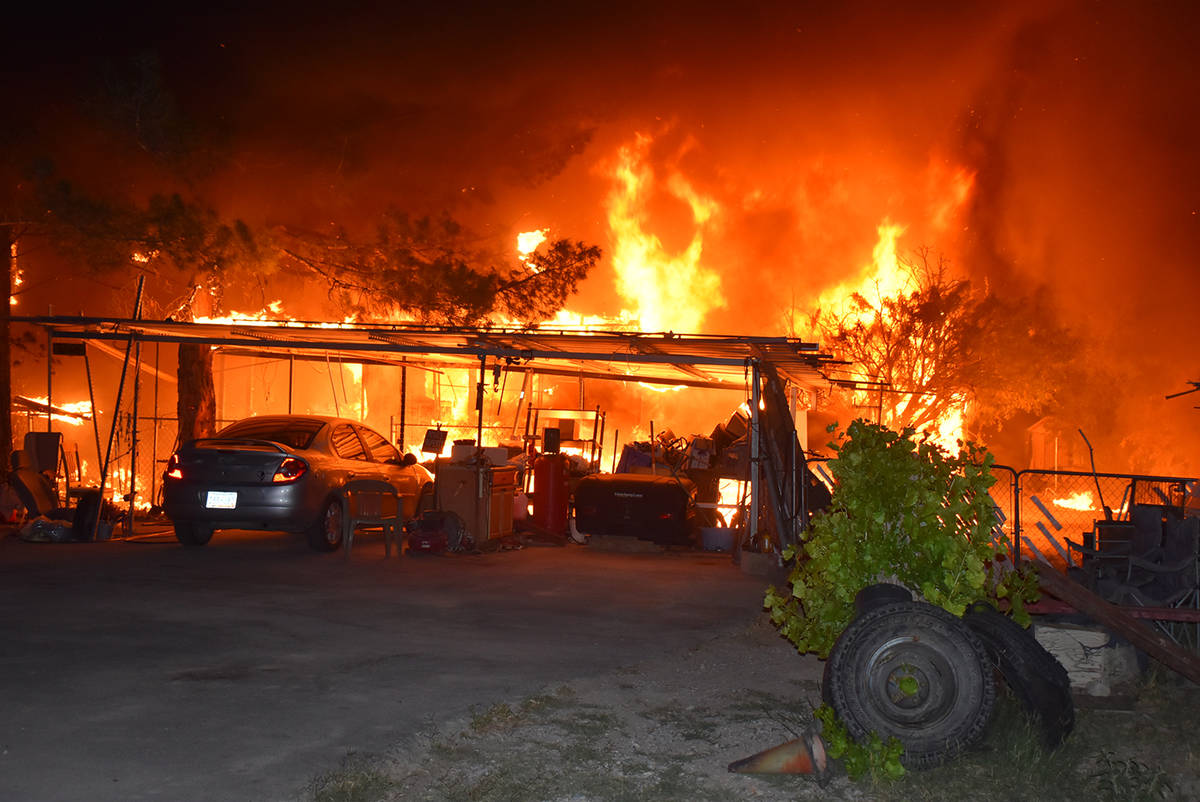 Special to the Pahrump Valley Times Pahrump fire crews battled a fierce multi-structure fire along the 1400 block of West Shady Lane Tuesday evening May 26, at approximately 9:30 p.m. Fire Chief Scott Lewis said the fire occurred in a no hydrant area. No injures were reported. 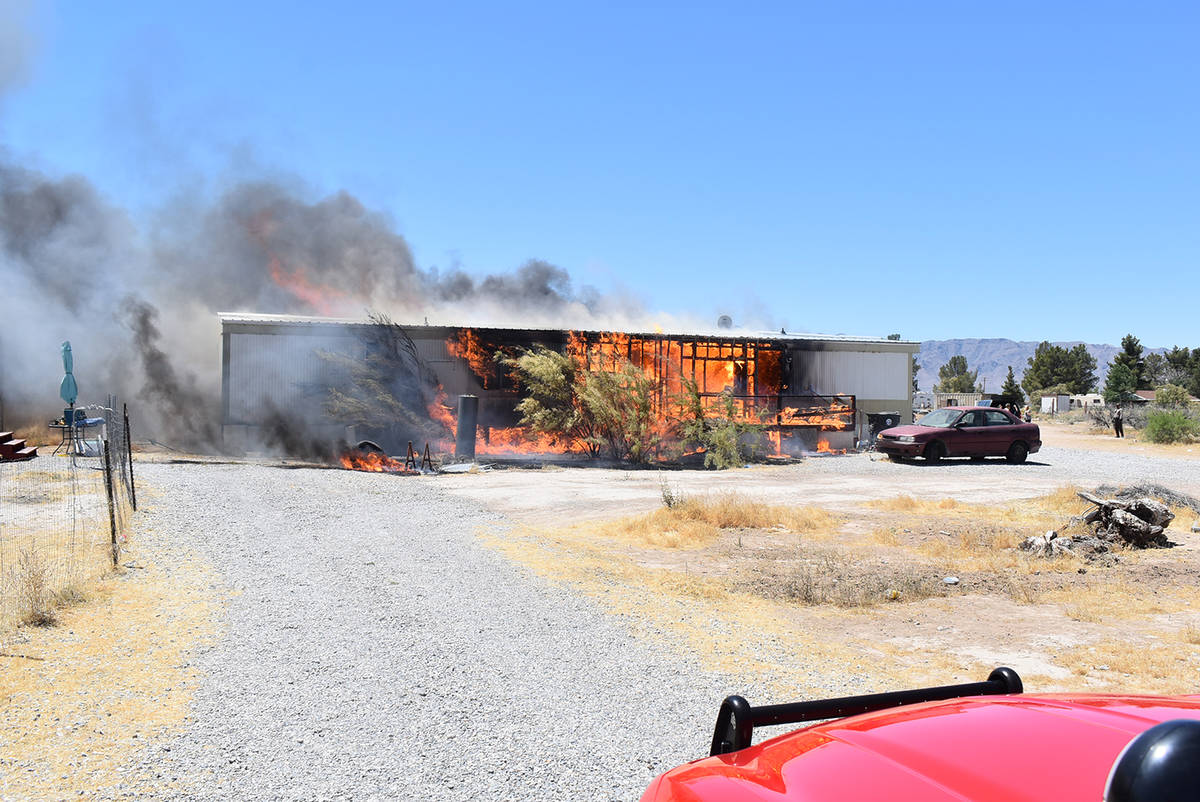 Special to the Pahrump Valley Times On May 24th fire crews were dispatched to the 1100 block of East Pioche Street for a report of a structure fire at approximately 11:30 a.m. The exact cause of the fire is under investigation. No injuries were reported.

Pahrump Valley Fire and Rescue Services crews were met with explosions and red hot embers raining down upon them as they battled a destructive multi-structure fire on Tuesday evening, May 26th.

Fire Chief Scott Lewis said crews were dispatched to the 1400 block of West Shady Lane at approximately 9:30 p.m., where they arrived to find an advanced fire involving five structures, five vehicles, and an overabundance of personal property.

“There were also venting propane and acetylene tanks,” Lewis said. “There were showering embers going on both of the neighboring properties on each side of the house. Crews commenced in aggressive defensive exterior attack utilizing master streams, where they quickly knocked down the main body of the fire. This fire occurred in a no hydrant area, so water was of concern.”

Lewis also said that once the main body of the fire was knocked down, crews utilized hand lines onto the property to control the individual fires in each of the structures and vehicles.

Additionally, he noted that there was one person who was unaccounted for, and that person remained unaccounted for as of Wednesday afternoon, May 27.

“The investigation on scene revealed that there was no one found on the property, and the immediate concern was that of life safety,” he said.

While battling the intense fire, Lewis spoke of how he and his crews were confronted with an anomaly known as the “Bleve” of a 100-pound propane cylinder on the fire grounds.

“Bleve stands for Boiling Liquid Expanding Vapor Explosion,” Lewis said. “It’s basically when propane reaches a point where it can no longer be contained by the vessel, and it releases with a volatile force. We were out there for about 13 and a half hours. It was a highly dynamic fire, which could be viewed throughout multiple locations in the valley. There were multiple structures, multiple vehicles and many mature trees. The cause of the fire is under investigation.”

On May 24, fire crews were dispatched to the 1100 block of East Pioche Street for a report of a structure fire at approximately 11:30 a.m.

“Crews arrived on location and found heavy fire throughout a single-wide manufactured dwelling in a no hydrant area,” Lewis said. “They completed a scene size-up and risk assessment where they placed the fire at high risk. Crews commenced a defensive exterior attack where they quickly controlled fire with no further extension. A cat that was trapped in an involved exposure, was rescued. There were no injuries and the fire is under investigation.”

On May 18, fire crews were dispatched to the 5600 block of East Manse Road for a report of a structure fire at approximately 9:24 p.m.

“Crews arrived to find smoke showing from a one-story single-family dwelling at the rear of the property,” he said.

“As crews entered onto the property, a male was writhing on the ground who was discovered to have a gun. Crews were put into a pause until the male and the gun could be secured by the sheriff’s office. Once that was completed, crews commenced an interior attack where they conducted primary and secondary searches and found no additional people within the structure, but they did find a deceased dog and cat. Once crews completed suppression, the evidence suggested an intentional act. The State Fire Marshal’s Office was engaged and they are investigating.”