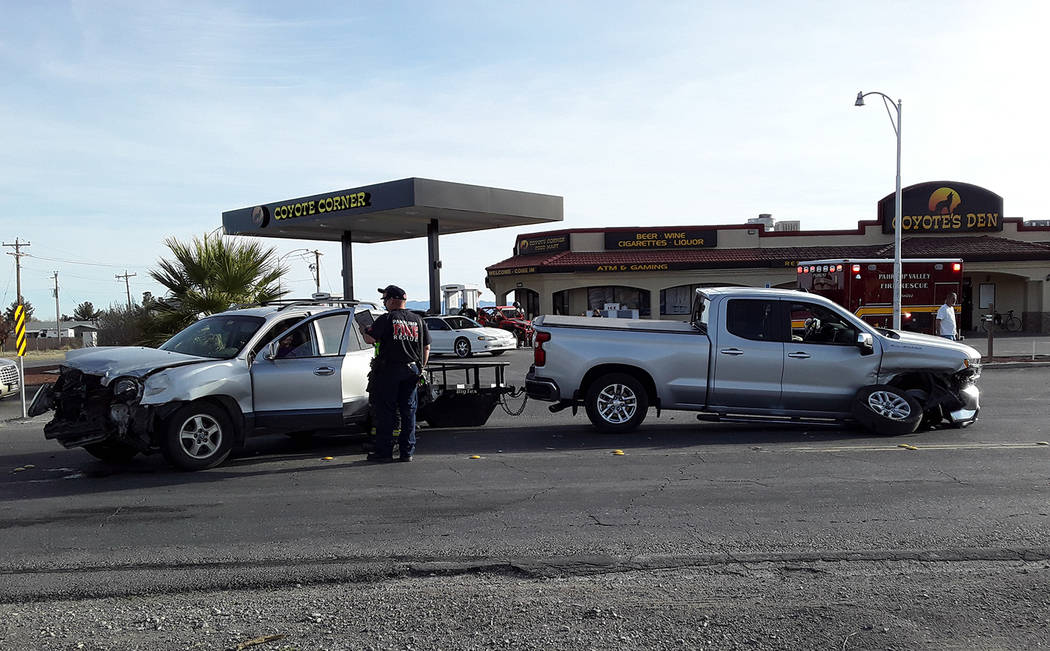 Selwyn Harris/Pahrump Valley Times No serious injuries were sustained following a high impact two-vehicle collision at the intersection of Kellogg Road and Quarterhorse Avenue just before 3:30 p.m. on Thursday, March 5. The Nye County Sheriff's Office is investigating the exact cause of the crash.

The collision, at the intersection of Kellogg Road and Quarterhorse Avenue involved a silver Hyundai SUV and a late model Chevy pickup.

No serious injuries were reported.

The driver of the pickup, Bobby Hartman said he was driving northbound on Kellogg, when the elderly driver of the SUV was stopped at Quarterhorse.

She pulled up to the stop sign on and stopped, and the next thing I know, she pulled out in front of me,” Hartman said. “I don’t think she saw me. I tried to miss her, but it just didn’t happen. Thank goodness I was wearing my seatbelt.”

Hartman also said the 2019 Chevy was a gift to him from his late wife.

“My wife died in June, and she told me last year that she was going to get me a new truck,” he recalled. “I told her that I didn’t need a new truck, but she handles all of the finances and she told me she has enough in her account to buy me a new truck. That truck is almost a year old and she had saved the money to buy it. I was a little shuck up, but I’m getting over it.”