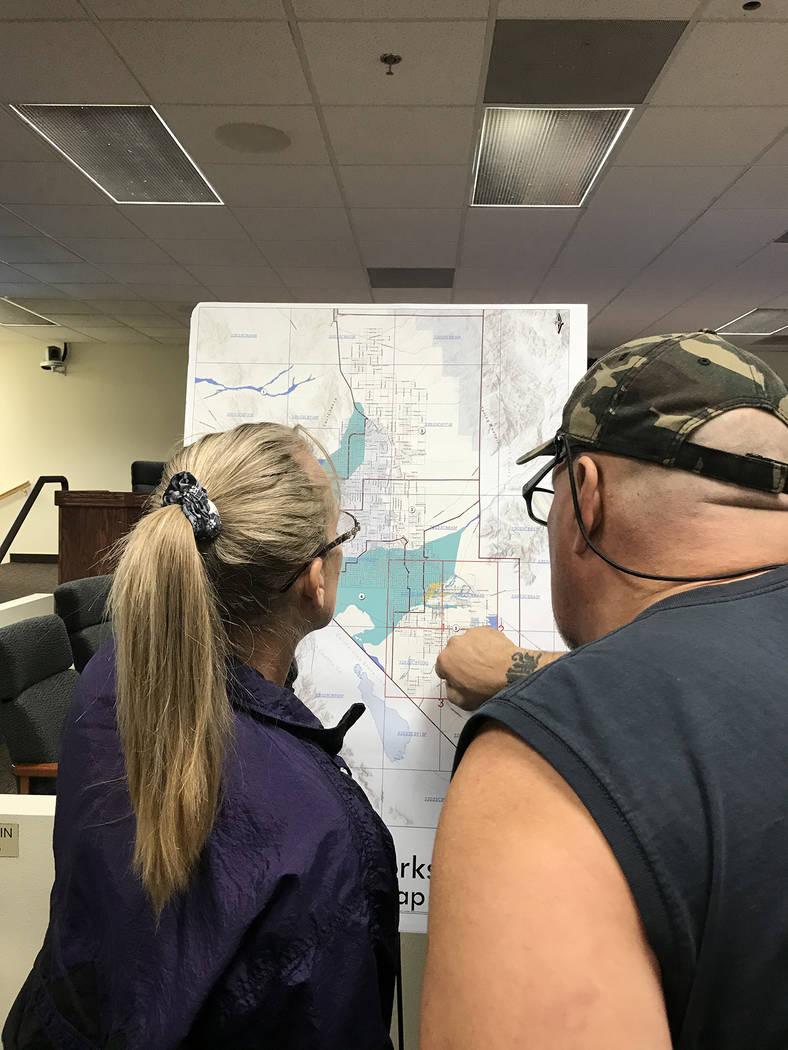 Robin Hebrock/Pahrump Valley Times Two Pahrump residents are pictured observing one of the maps provided at the Flood Insurance Rate Map workshop held on Jan. 30 to discuss pending changes to that map. 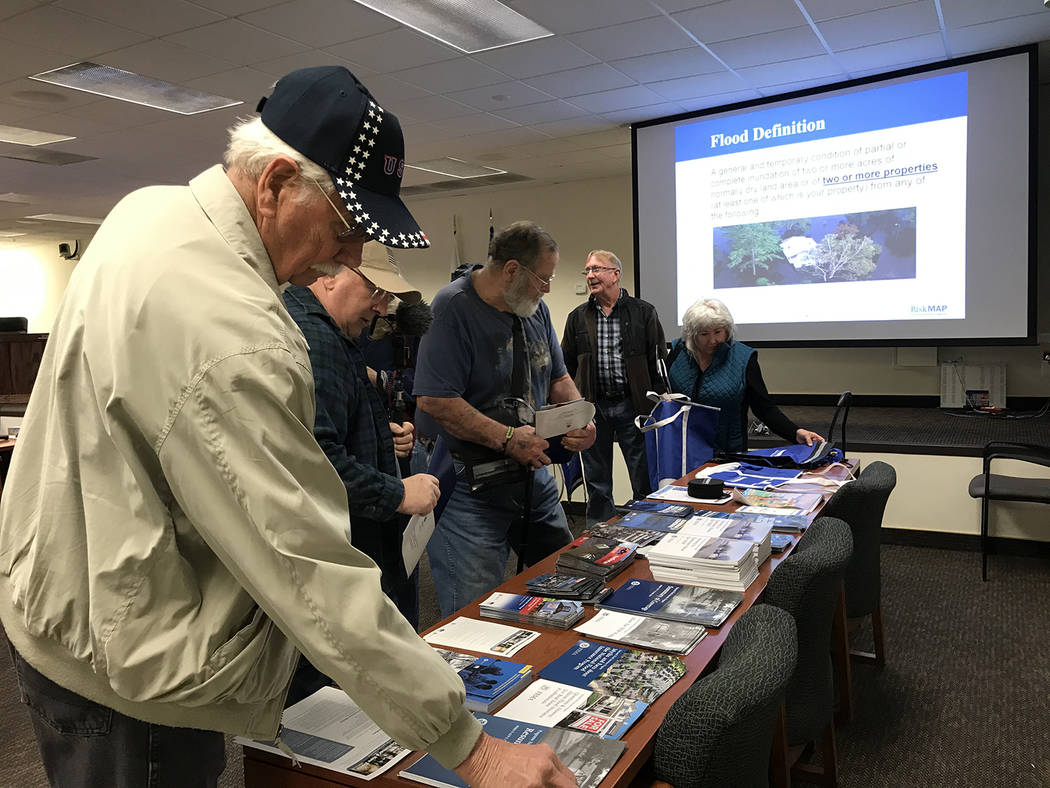 Robin Hebrock/Pahrump Valley Times As residents entered the Flood Insurance Rate Map workshop, they were able to collect a variety of brochures and informational pamphlets regarding flooding and related insurance. 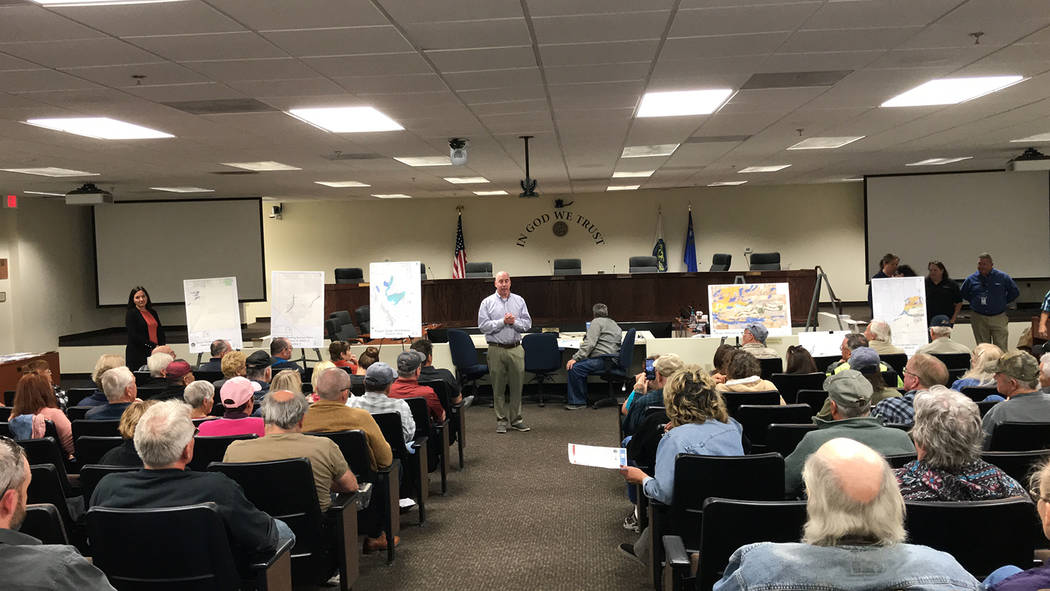 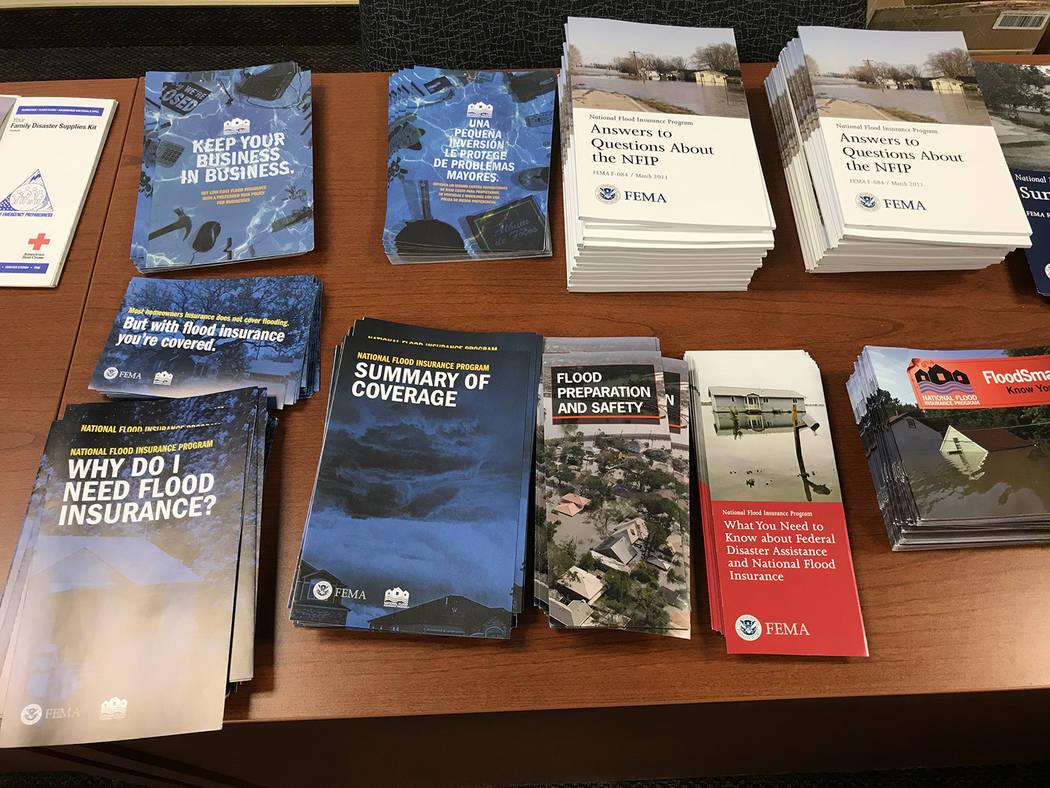 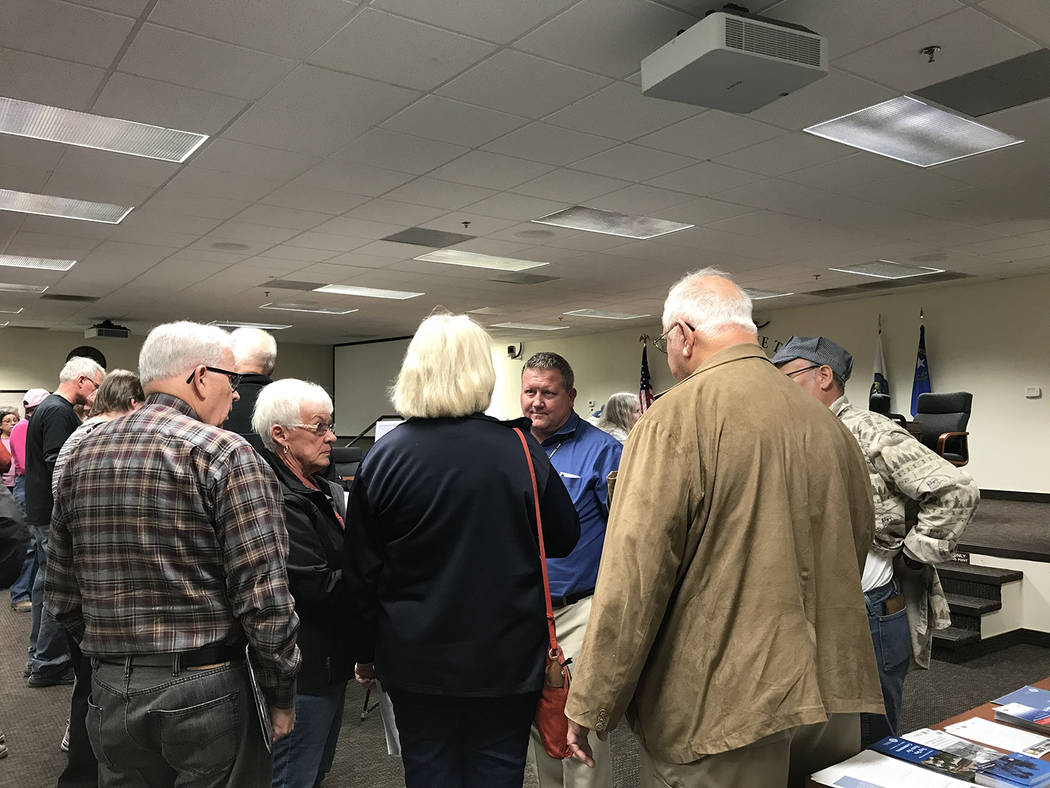 Pending changes to the federal Flood Insurance Rate Map brought over 100 Pahrump residents to a workshop on the subject, many of whom were angered by the fact that their homes were being added into a high-risk flood hazard area, resulting in the need for those with federally-backed mortgages to purchase flood insurance.

The workshop took place on Wednesday, Jan. 30 at the Nye County Commission Chambers, where the room was buzzing with activity as residents examined maps on display and attempted to conduct one-on-one conversations with FEMA officials about their specific situations. After more than half an hour of this, workshop organizers decided it might be more efficient to provide a presentation to attendees as a whole, to give an overview of what was taking place and why.

FEMA Region IX engineer Eric Simmons started the presentations off, explaining, “Nye County participates in the National Flood Insurance Program and one of the benefits of that is a Flood Insurance Rate Map (FIRM). That FIRM is a standard product, these maps exist all across the country. They delineate areas of high risk, moderate and low flood risk.

“These mapped areas of high risk are important because, if you have a federally-backed loan and your building, your structure is located in that high risk zone, banks require flood insurance,” Simmons continued. “In those same zones, Nye County has building criteria if you are undergoing development.”

Only a portion of Pahrump is getting a revised FIRM, the area in the Peak Springs Fan, which predominantly covers the southern and eastern portions of the valley. All flood zones beginning with the letter “A” are considered high risk, while those with an “X” designation are in the moderate to low-risk area.

Simmons said FEMA had hired a contractor to study the Peak Springs area, with the county providing detailed topographic data that was acquired through a relatively new technology called light detection and ranging. A water shed analysis was also done, creating a hydraulic modeling of the flood plain. “That determines how deep and where the flooding, during these major floods, could go,” Simmons stated.

One question that was of keen interest to attendees was that of who had prompted the study that led to the changes. Pahrump resident and former Pahrump Mirror newspaper editor Dann Weeks pressed that point, asking repeatedly what had initiated the changes, to which FEMA officials responded that Nye County had requested the study that precipitated the FIRM changes.

Nye County Principal Planner Cheryl Beeman added, “The board of county commissioners specifically chose the Peak Springs area and I believe it was November of 2010 when this project started. The board of county commissioners back then chose this area because of the high amount of building and development going on in this area and they knew the flood plain had not been properly characterized.” The southern and eastern portions of the valley are where a majority of subdivision development has taken place, including master planned communities such as Mountain Falls and Burson Ranch.

That answer had one woman lamenting, “So basically what I am getting is, the builders knew prior to this change that came across that it was happening but they failed to tell the new homeowners of the change, saying no, they were not in a flood zone. But yes, we are now.”

Her comments caused a swell of outbursts but once the general hubbub that followed that statement died down, Simmons got back to his presentation.

“The question we’ve heard is, why is the flood map changing? For this area… FEMA hadn’t had a detailed study of flood hazards in this area before. So we have this new study that shows much better information,” Simmons said.

One resident asked how many flood insurance claims have been filed by homeowners in Pahrump and the answer had many in the audience grumbling and chuckling mirthlessly. Officials stated that there have only been 71 claims since the mid-1980s.

Area developer Michael Lach then questioned why houses that have been built 24 inches above street level, as required by county code, would need to have flood insurance, asserting that one-foot floodwaters wouldn’t reach those homes. “It just seems like we are all paying for something that we’re building to prevent,” he said.

Simmons responded that was why FEMA officials were there, to communicate the risk of flood, remarking that yes, it’s true that newer development is much safer but that doesn’t completely negate the flood risk.

Resident John O’Brien interjected with his thoughts, griping, “Every time we have developments change the topography of our land, it changes where the water flows. Most of the development of Pahrump has taken place along Highway 160 south of Gamebird. All the people on Gamebird Road west have now become a high concern.”

He also expressed his frustration over the fact that when he built his home on Homestead Road just south of Gamebird, that structure was originally 12 inches above the roadway and it is now 23 inches below that level, causing water to flow onto his property during rainstorms.

“When the county gives people permission to build, do they take into account how they are changing the topography of the land and where the water goes or do they just allow them the build houses?” another meeting attendee asked.

Beeman replied that the county does require that all subdivisions go through hydrology, drainage and grading studies and plans, according to Nevada law. “They are supposed to not increase the floodwaters that move off their property,” Beeman said, causing round of skeptical laughter.

Another resident asked how long it would take for someone to have the flood map changed, if they can present data that shows their building is not at risk of flooding. Simmons explained that there are several processes for such action, including a letter of map amendment or a letter of map revision based on fill, which can be completed fairly quickly. Other processes can take longer.

FEMA Region IX National Flood Insurance Specialist Edith Lohmann then took over to provide a presentation specific to the insurance aspect of the FIRM changes. She told the audience that those whose buildings and structures have been mapped into a higher risk flood zone should consider purchasing flood insurance immediately.

“The message that I want to get out there, to save everybody time, money and frustration, is, go to your insurance agent as soon as you can, buy a flood insurance policy, ask for something called a preferred risk policy,” Lohmann stated. “You want to do that before these maps become effective on March 6… Don’t wait to the last minute. What that does, by buying it before the new map changes, that means your rate for flood insurance will be based on your low-risk flood zone that you are in now, your zone X. And that will continue forward as long as you keep continuous coverage.

“Your lender cannot require you to have the flood insurance until after March 6 because that is what the federal law says. But at that point, you have passed the deadline to get the cheaper premium and more importantly, to be grandfathered,” Lohmann continued.

She informed the crowd that the National Flood Insurance Program can provide flood insurance at a generally lower cost than other providers but residents can shop around to find the best plan for them. The average cost for the Preferred Risk Policy through the National Flood Insurance Program ranges from $171 to $479 per year, depending on the amount of coverage needed, she explained.

Those who do not have a federally-backed mortgage will not be required to purchase flood insurance but Lohmann said she would urge them to consider coverage anyway.

“Even if you don’t have a lender on your building, you still may want to go see your insurance agent… even if it’s just minimal coverage… if there is any chance you think you are going to be selling the building or will be needing any kind of loan on it somewhere down the road,” Lohmann said.

Lohmann also emphasized that the National Flood Insurance Program only insures buildings, and those with bare land in the high-risk zone will not be required to have flood insurance unless and until development starts on their property.

There was also much grumbling from attendees that evening about the fact that Spring Mountain Motor Resort and Country Club is being removed from the high-risk flood zone.

Beeman attempted to explain why that change was being made, stating, “I think there was an “A” channel along the highway and the re-engineering and the remapping showed that was no longer needed so it’s being removed. That’s about the information I have.”

The presentations then came to an end and some attendees began to filter out while others took the time to speak with FEMA officials one-on-one once again.

To view the map showing the parcels being effected by being mapped into or out of a high-risk flood hazard area visit https://bit.ly/2H3eXNP