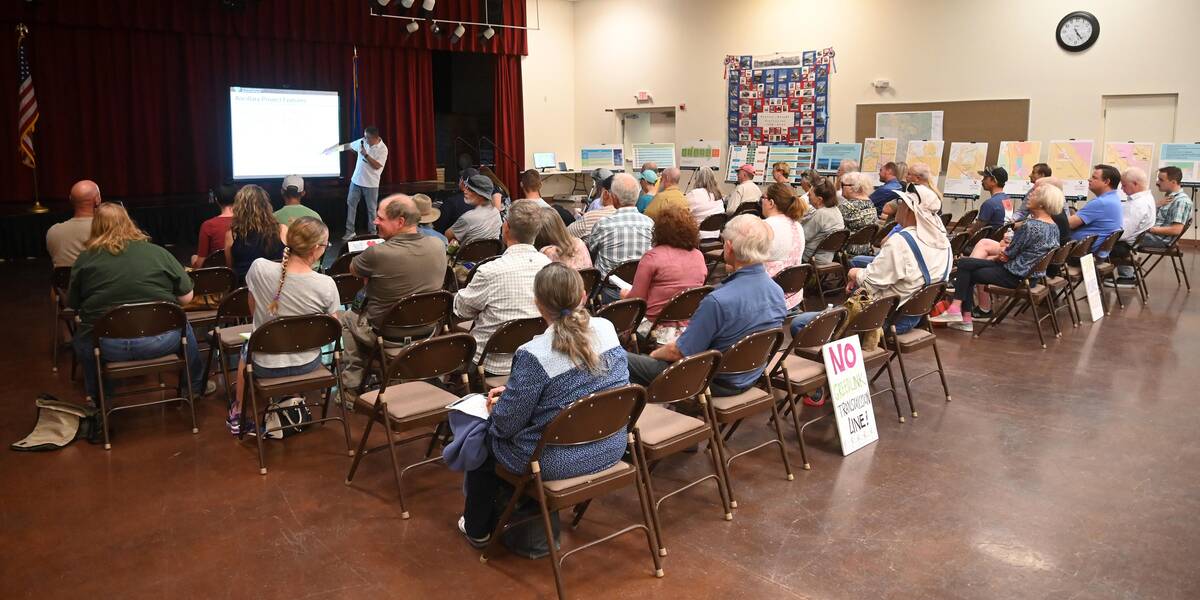 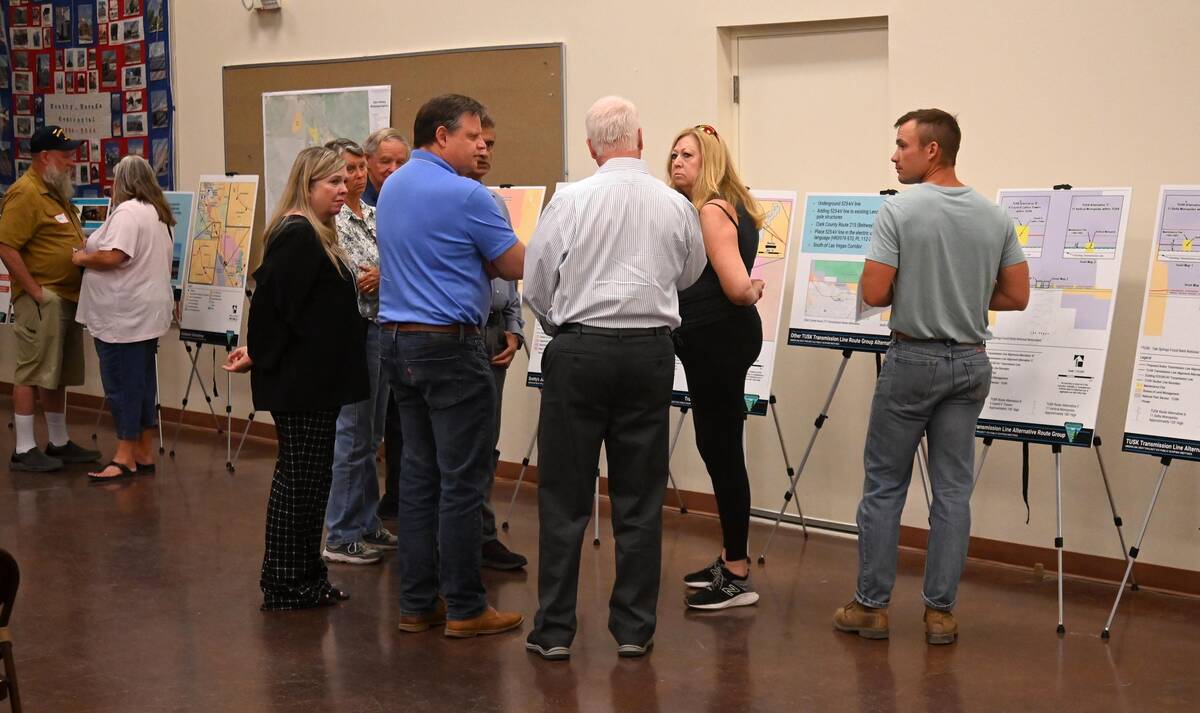 Richard Stephens/Special to the Pahrump Valley Times After the meeting people checked out the maps and other graphics on display and talked with NV Energy and BLM representatives.

“When you see a train coming, you can’t stop it, but you try to keep it from running over your toes.”

State Bureau of Land Management Renewable Energy Branch Chief Greg Helseth, who conducted the meeting, played down the connection between the proposed Greenlink West transmission line and the solar energy companies applying to develop large-scale projects along its route in the area.

Helseth said the transmission line was not about any particular source of energy, but more about the need to upgrade the state’s electrical grid, providing for more reliability and connectivity.

“Nevada is so isolated,” Helseth said, pointing out that the state’s two population centers of Las Vegas and Reno are far apart, with isolated small communities scattered in between. He said there was a need for the capacity to transfer power in both directions.

Some of the concerns voiced by locals had to do with economics.

Amargosa resident Bill DeWitt wanted to know how much money local communities could expect to get out of the project.

David Spicer, whose ranch is just north of Beatty, said that the planning of the project needed to take into account its possible impact on mining, on the Beatty area’s nationally recognized conservation effort, and on the outdoor recreation environment.

“If it has to happen, it needs to go as far away as possible,” said Spicer, who was among those suggesting that it be placed as close as possible to the existing Nevada Test and Training Range (NTTR).

Beatty resident John Lisle, agreed that the power line should go as close to the NTTR as possible, adding, “I’m not if favor of it going through the 7J (ranch).”

Spicer said that there should be compensation for any loss of viewshed or of access to public lands as well as for any reduction in the value of people’s land.

Charles Gallagher, whose farm and ranch is north of Beatty, said the proposed route goes right by his back fence, and that he is concerned about its possible impact on efforts to develop agriculture and eco-tourism in the area. He, along with Kevin Emmerich, requested that the BLM hold meetings with affected property owners.

Emmerich said that Greenlink “opens the Pandora’s box” of the proposed massive solar projects, saying that, “All the applications mention Greenlink and the substations.”

“I completely oppose this power line, she said. “It doesn’t do a thing for Beatty. It’s not benefiting us.”

Cunningham read a comment from Rhyolite resident Karl Olson, who added his voice to those asking that it be put as close to the NTTR as possible.

Amargosa Town Board member Trevor Dolby wanted more information about the proposed Amargosa substation, and LaBossiere was concerned that if it were located too near the highway might obstruct the view of a turn on the highway and cause accidents.

Beatty Town Advisory Board Chair Erika Gerling said that it is “important that people and families come first.” Speaking as a private citizen, she said that she thought the original proposed route was the best.”

The public has until June 1 to submit comments on the project through the state BLM website.