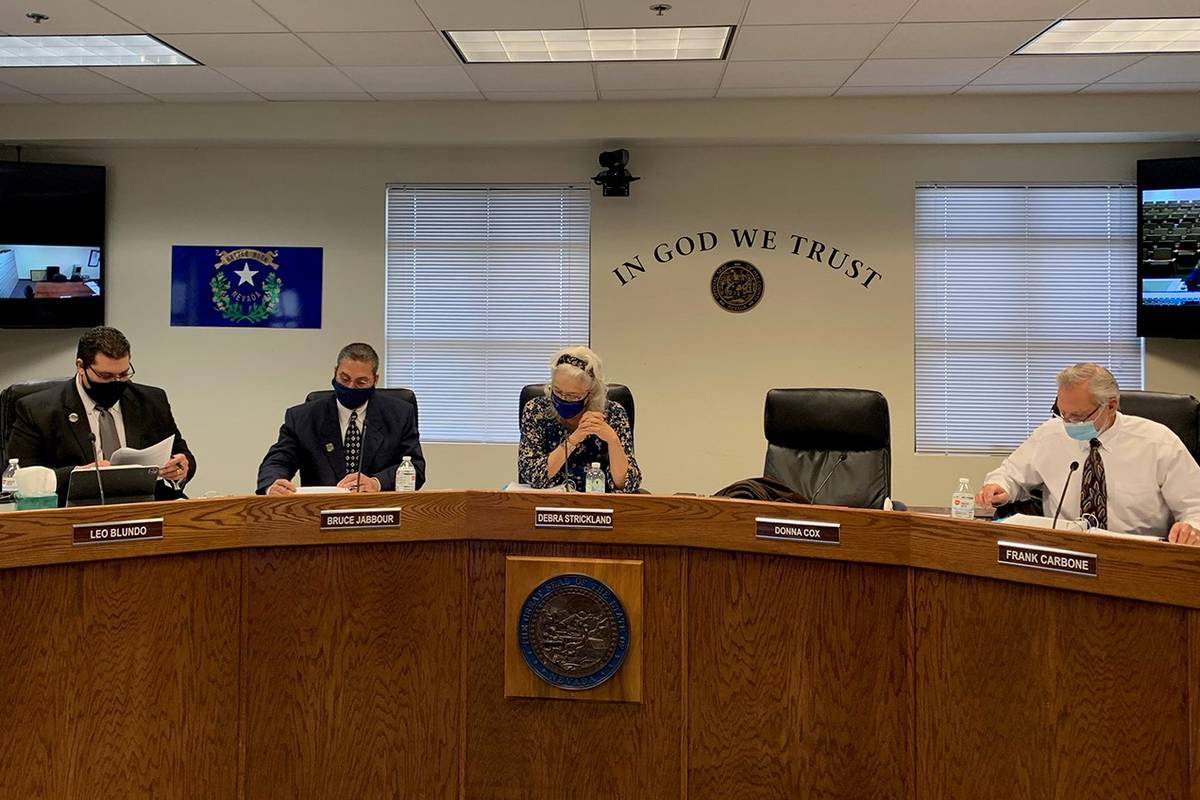 Special to the Pahrump Valley Times After questions were raised once again, the Nye County Commission has requested that officials with the Nevada Division of Water Resources come before the board to give the community an in-depth explanation of how its department utilizes funding from the groundwater levies assessed on basins within Nye County.

With the cost of the levy assessed on the rise over the past few years, at least in Pahrump Basin #162, several members of the public as well as commissioners questioned once again just what that funding is used for. It was much the same in 2020, when commissioners first called for an explanation of the groundwater levy. Though DWR had provided a letter last year giving a generalized idea of what the levy in Pahrump is used for, and this time around an official with the Division of Water Resources was on hand to respond to questions, commissioners apparently felt that answers given both in 2020 and at the April 6 meeting were not detailed enough, so they requested that county staff work to have DWR come before the board with a more in-depth look at exactly how the dollars assessed are being spent.

Local resident Ammie Nelson kicked off the public comment on the items, stating that she feared they would mean an increase in her property tax bill.

Indeed, the assessment for this year is 21 cents higher than last year. However, the levies are not new and have been in place for decades, according to information from the Division of Water Resources. They tend to fluctuate but in the past few years, those levies have been consistently increasing, a point that Nye County Assessor Sheree Stringer was quick to hone in on. Stringer demanded to know what the money gets the local taxpayer, adding that she herself has never seen any of the reports for which the funding is reportedly used and she’d like to know where the public can go to access those documents.

“And being a taxpayer, I want to know why these costs keep going up,” Stringer asserted.

For other basins within Nye County, the levies have also continuously fluctuated and some years they have not been assessed at all, depending on whether the engineer’s office was performing additional studies or work in those basins. In all basins besides Pahrump Basin #162, the assessment is paid by water rights owners, rather than by all property tax payers within those basins.

As explained by a representative from DWR, these fluctuations are all dependent upon exactly what the division is doing in each basin that particular year. First disclosing that she is a well-drilling contractor, Nye County Commissioner Debra Strickland then jumped in to explain that the fees were intended to help cover the costs of services rendered to the county in maintaining records and managing the water resources in the various basins. She noted that the documents created from studies, pumpage inventories and more could be found online at www.water.nv.gov

Daniel Randles, an official with DWR, confirmed that Strickland was correct in stating that the fees were to cover management costs incurred when addressing specific basins, stating, “At the time that we are trying to manage these basins and do, as I believe the chair mentioned… we do water level measurements and we do an inventory in the Pahrump Valley, in addition to items that are available at water.nv.gov such as maps and so forth, that are all accessible. If anyone has questions on how to access that they can call our direct line at the office at 775-684-2800 and any of the staff that is on hand should be able to help you with that.”

Randles also acknowledged that he does anticipate that the cost of the groundwater levies will continue to go up, as other costs also rise, but emphasized that his department only assesses as much money as it needs to operate in each specific basin.

“When you see these (levies), it’s providing for the additional work that our office does that’s above and beyond the typical work that we would do in a basin, and it’s nearly always associated with water level tracking or inventories or some sort of study that we are doing,” Randles said.

Helene Williams with the Private Well Owners Co-op of Nye County noted that much the same discussion had taken place last year when the same items were before the commission. “We are not supporters of what’s happening here but I think we’re caught between a rock and a hard place with the Division of Water Resources… I think we need to keep an eye on the cost and the minute that it doubles and triples, which I think it will eventually, then I think we will all have to step forward and see what we can do about this.”

Tim Bohannon agreed, remarking “The scope creep, or the dollar creep, that’s happening, if it’s consistent, it’s just becoming an accepted thing and that’s not necessarily a good thing. We should challenge it. That doesn’t mean it’s not justified but we should challenge it, either, hey, $121,000 makes sense, or it doesn’t.”

When the matter came to a vote, it was a split decision with three commissioners, Strickland, Bruce Jabbour and Frank Carbone, all in favor while commissioners Leo Blundo and Donna Cox were against. Carbone and Jabbour both noted that though it may be an unfunded mandate, the levy is required per state law and it would appear on tax bills regardless of what the commissioners voted.

Strickland concluded the item by asking staff to reach out to DWR to request that a detailed presentation be made to the commissioners so they and the public would have a better understanding of the matter.

“With a breakdown of the financing,” Carbone added, while Blundo chimed in, “We want to know what we’re getting for $121,000.”