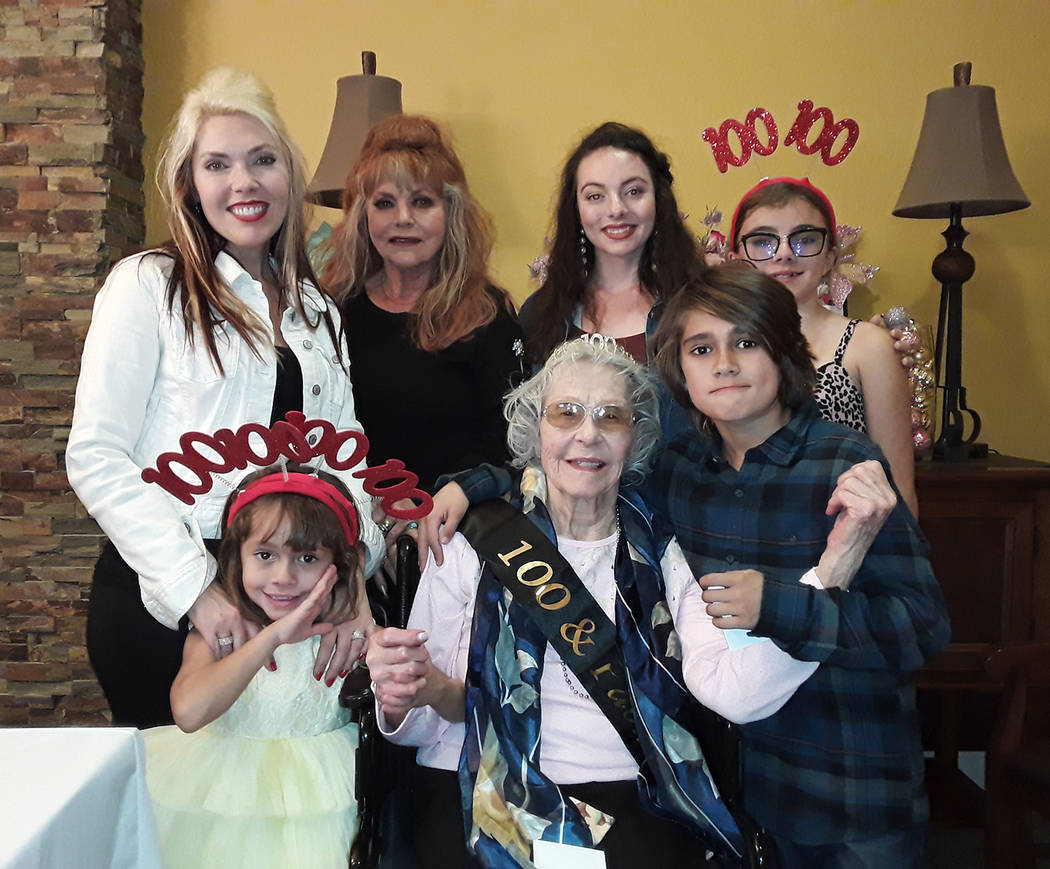 Selwyn Harris/Pahrump Valley Times Dottie Collins, who turned 100 years-old this week, is surrounded by family members who collectively threw a surprise birthday party for her on Tuesday Dec. 10. 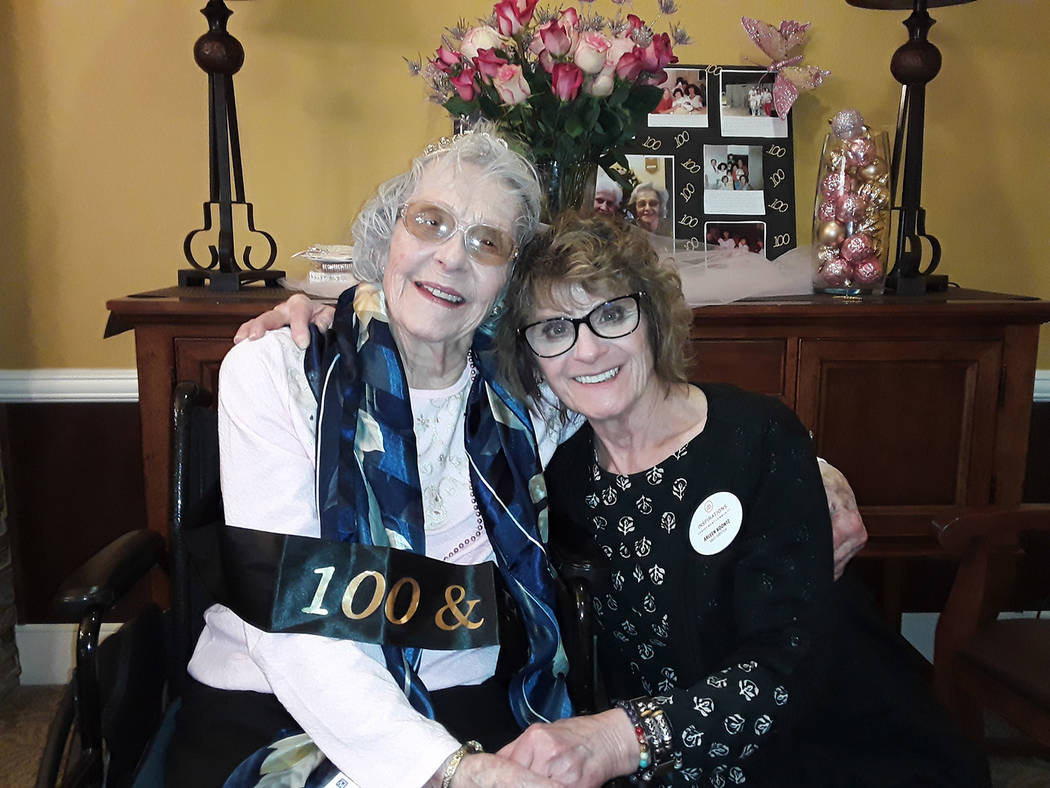 As a genuine centenarian, Dottie imparted many stories she recalled while growing up in the early 20th century.

Dottie was born in Pasadena, California and lived at a hotel her grandmother owned along the famed Colorado Boulevard where the popular Tournament of Roses Parade is hosted each New Year’s Day, which began back in 1890.

During her time in Pasadena, she enjoyed watching the parade each year, as well as attending the Rose Bowl football game, where she witnessed what is still considered one of the biggest blunders in college football history.

The mistake was committed by a University of California Berkeley player named Roy “Wrong Way” Riegels back in 1929.

The error ended up costing them the game to Georgia Tech by a score of 8-7.

“I was at the Rose Bowl game when the guy ran the wrong way,” she recalled. “He got turned around and he ran in the wrong direction. My mother, Florence, was also a Rose Queen for the Rose Parade during that time. That was a long, long time ago.”

Dottie was also fortunate enough to have had family who made a decent living, as they purchased quite a bit of property in California.

“My grandmother bought property, so that when my dad retired, she gave him some property in Paso Robles, California,” she said. “He had many, many acres. In those days, when you bought property, you didn’t go see it in a car. In those days, you would buy the property unseen. My dad built a beautiful home there. At that time, we had no electricity, so my dad had to buy something from PG &E, which was an electric company, so we could get electricity.”

Indoor plumbing was also scarce at the time.

“At first, we did not have indoor plumbing, but my dad eventually had things pretty well going and had a nice home for us.”

At the time, much of Southern California was considered farmland.

Dottie noted that her family did their own butchering for a spell.

As far as appliances were concerned, Dottie said they were at best, primitive, as being the main method of preventing certain foods from spoiling.

“We had a ranch and we had our own cows, pigs, chickens, horses and everything,” she said. “We didn’t really have refrigerators at the time, we had ice boxes. It was just a regular icebox, and then we would have a nice man with those big tongs, who would put the big huge blocks of ice inside the icebox. But before the icebox, we had something that looked just like a cupboard door, and the only way we could preserve food was that my mom would have to take the meat and put a layer of lard over it, and then another layer, and that preserved everything when you butchered.”

Years later, after Dottie graduated from high school in 1937, she worked for a short time at an attorney’s office, but the job didn’t quite suit her.

For a time, she worked at a soda fountain, but then she decided to embark on a career as a beautician, after living at the Evangeline Residence for Women, with a few friends.

“At that time there was a beauty school that started up in San Luis Obispo, and that’s when I learned hairstyling, and I eventually got a beauty salon of my own because I had that experience,” she said.

Once Dottie reached adulthood, she admitted to cultivating a few vices over the years, when she started smoking at the age of 19.

“I smoked cigarettes until I was about 74 years old,” she said. “I was really a big smoker. If I went out and we had drinks in the evening, it was probably two packs a night because you don’t have cocktails without a cigarette.”

As a spry, very quick-witted centenarian, Dottie uses a wheelchair and must use oxygen, as she was diagnosed with COPD.

As far as any regrets in her 100 years, she cited the classic Frank Sinatra song “My Way.”

“Yes I do,” she candidly admitted. “Of course it was different because in his song he said yes I have regrets, but then again too few to mention. But I’m not like that. I have got some big regrets and I have learned so much in the last 20 years or so. I don’t even feel like I’m the same person I used to be, because I don’t like to think that I was the person I was in so many different instances. I never really thought about living to be 100 years old. Age was really not on my mind. I just never really gave it too much thought.”

Early 20th-century pop culture was yet another topic of discussion, as Dottie recalled.

Relocating to the desert

After living in Pahrump for roughly 5 years, Dottie said she was a bit hesitant about becoming a Southern Nevada resident.

“I had never seen Pahrump but when I moved out here, I absolutely loved it,” she said. “It’s a smaller type town and I love the weather. the outdoors are beautiful. I can see the birds and the mountains and the sunsets in the evening are glorious. I just really like it out here.”

Regarding Tuesday’s birthday party, Dottie said she was completely amazed at seeing her family, some of whom arrived from Santa Barbara, California.

“Today’s party was a total surprise,” she said. “I had absolutely no idea at all. I was just speechless when I saw everyone at the table. I was thinking to myself, ‘who are they?’”

As far as advice for those who are reaching their golden years, Dottie put her message in very simple terms.

Dottie, who lost her only sibling brother at the age of 90 is a proud mother, of more than a dozen grandchildren and great-grandchildren combined.