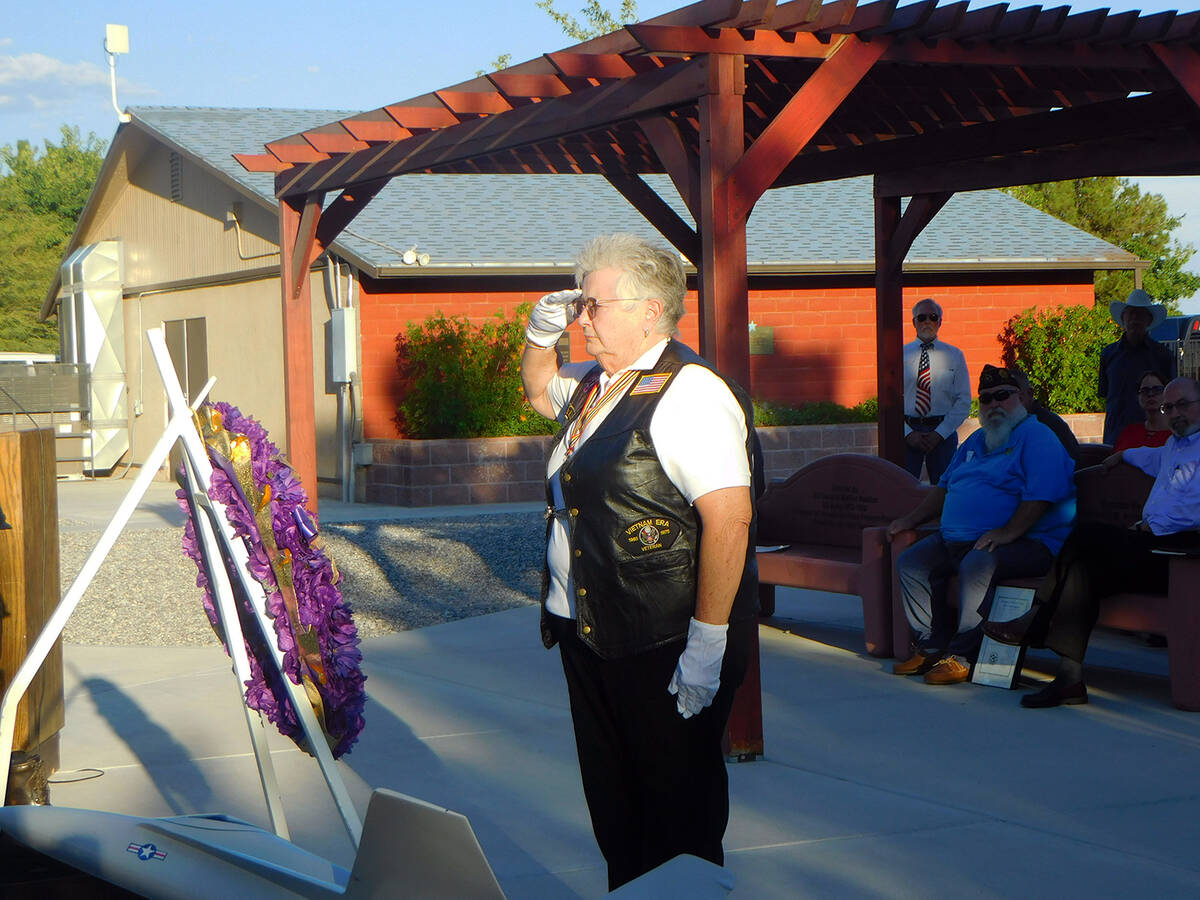 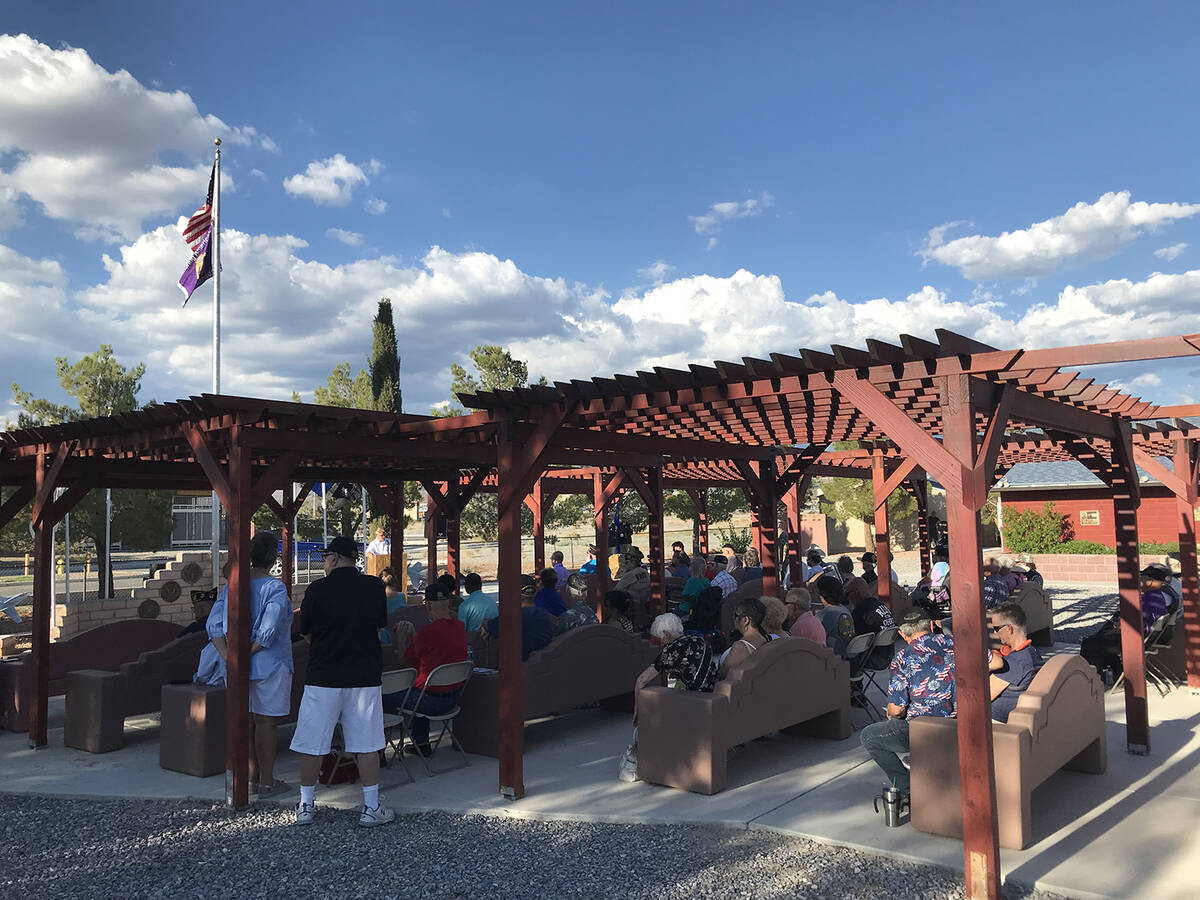 Robin Hebrock/Pahrump Valley Times A sizable crowd gathered under the pergola at the Pahrump Veterans Memorial for the Purple Heart Day ceremony. 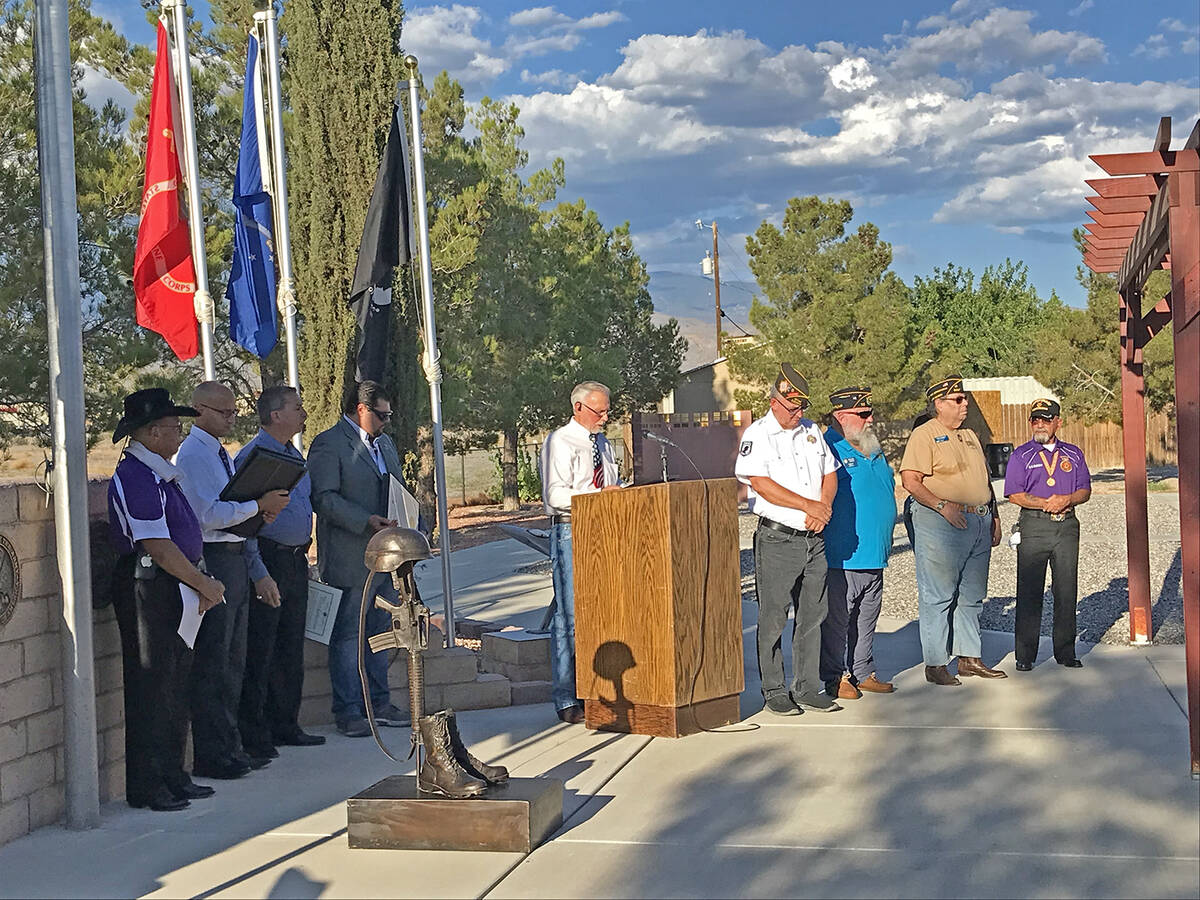 Robin Hebrock/Pahrump Valley Times Nye County Commission Chair Frank Carbone, at the podium, is pictured with town officials and representatives of the VFW, DAV, Marine Corps League and American Legion during a presentation of the proclamations naming Aug. 7 as Purple Heart Day in Pahrump and Nye County. 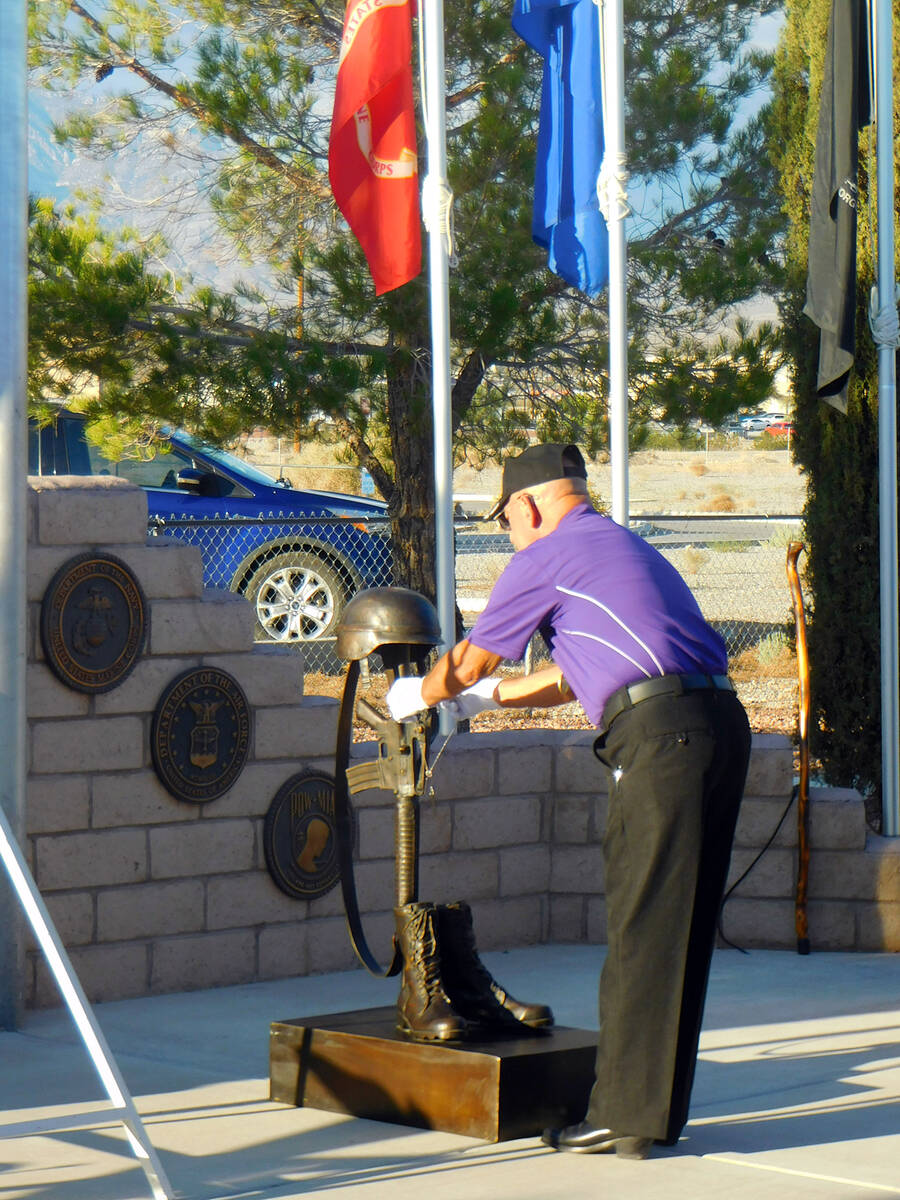 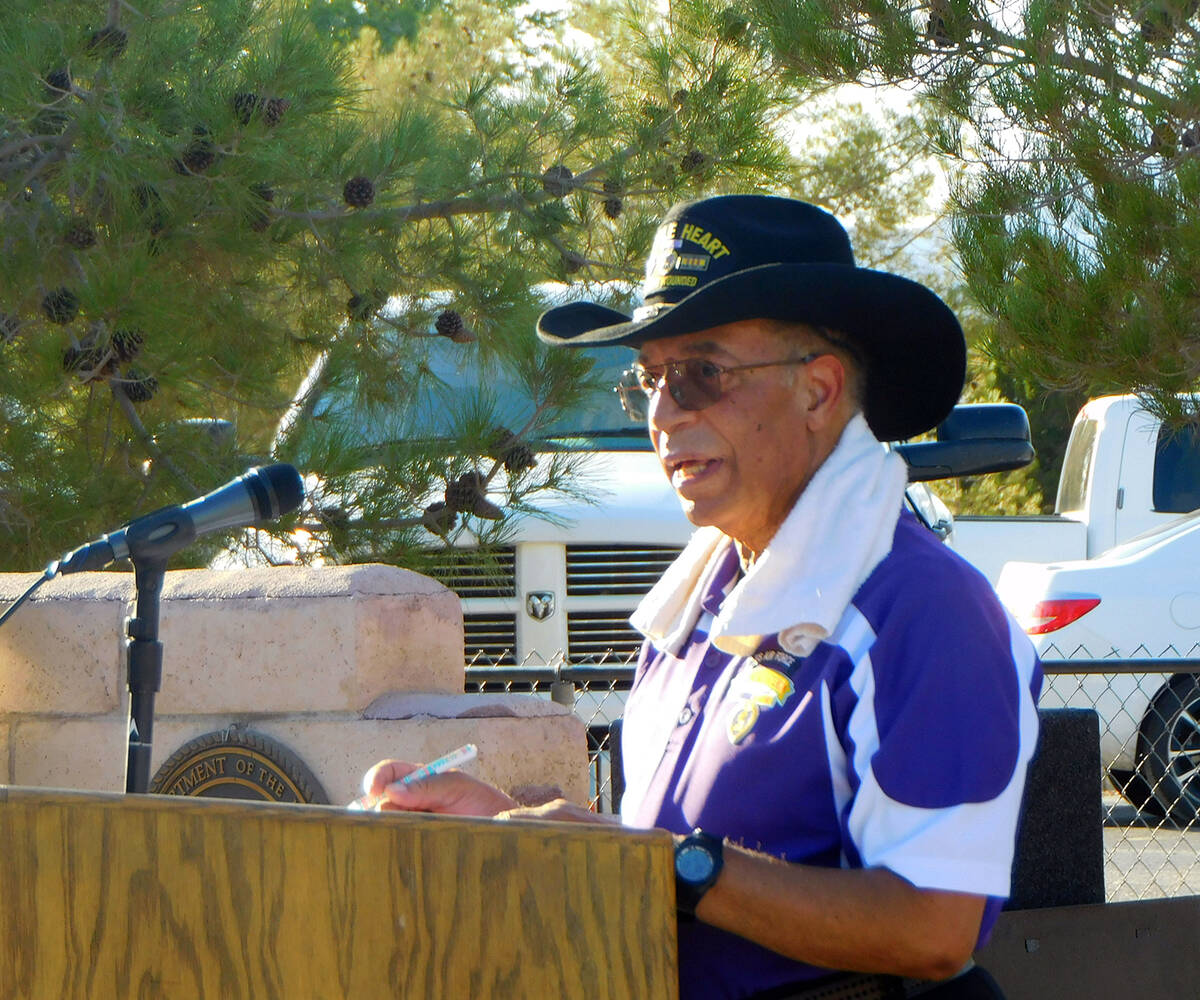 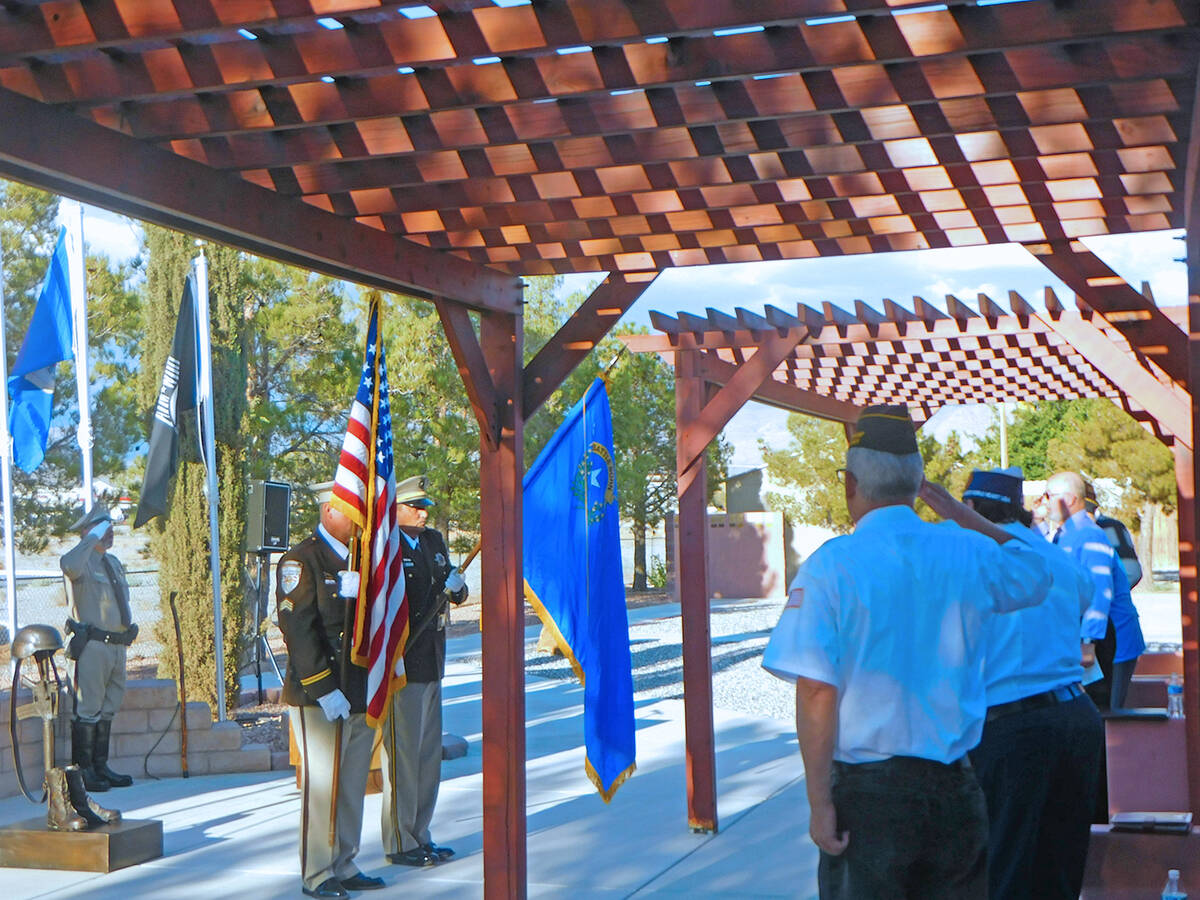 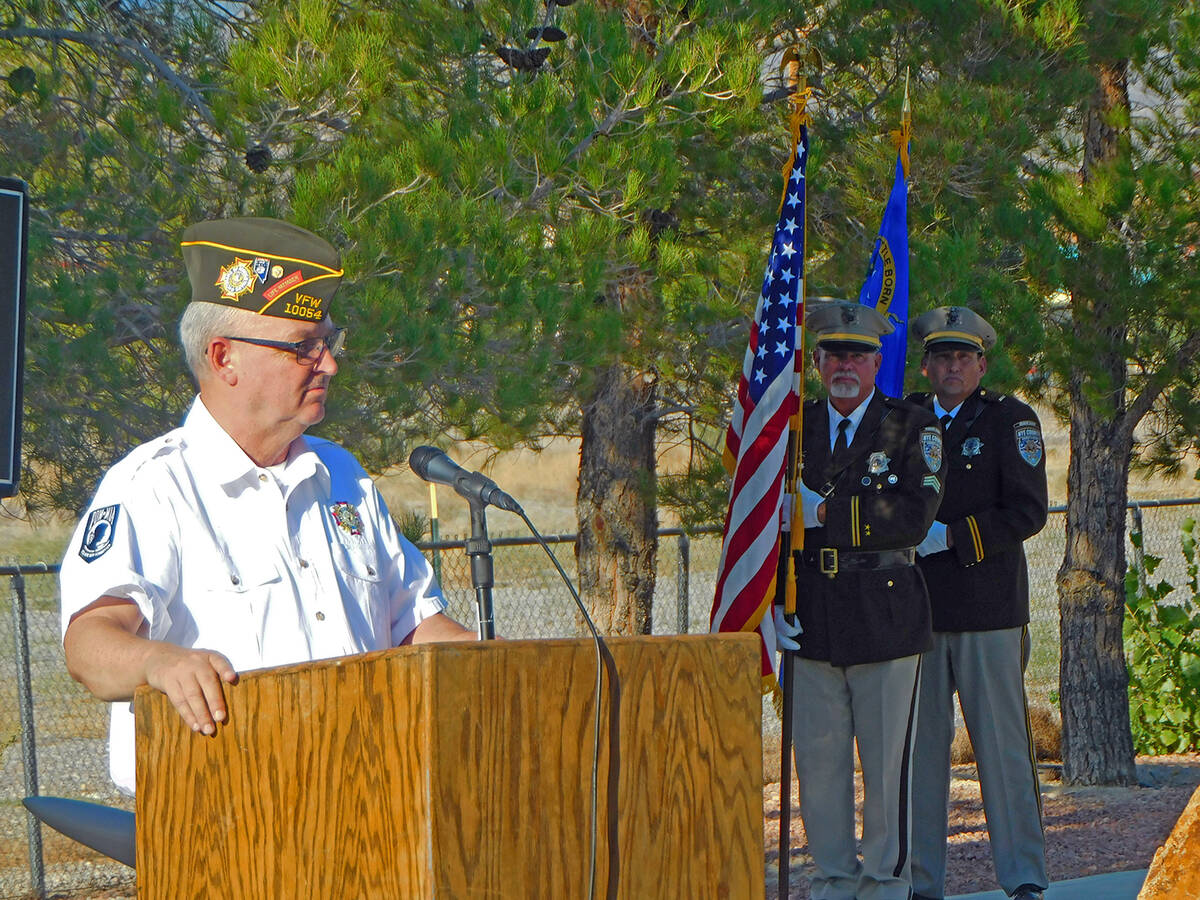 “Purple Heart Day, which is celebrated every August 7, is a day designed to show gratitude. It’s a day to allow Americans to honor and remember those who bravely served this country and suffered injuries, or were killed while serving,” Kennard explained of the holiday’s meaning. He then introduced the many dignitaries in the audience before turning it over to Dr. Tom Waters.

Waters, who was a major contributor in the effort to make Pahrump the first Purple Heart Town in Nevada and Nye County the state’s first Purple Heart County, was master of ceremonies for the event. He started off by explaining that unlike the last several years, the 2022 Purple Heart Day ceremony had been sponsored by the VFW and in the future, each of the four local veterans’ organizations would be heading the event as well.

“The program tonight is being hosted by the VFW post. During rehearsal, we decided that, because we are rotating this each year, next year will be the Marines Corps League. The year after that it will be the American Legion, then it will go back to the DAV. So you will see a different veterans’ organization (organizing the ceremony), to show how well we work together. And that’s what it’s all about,” Waters stated before the formal program began.

VFW Chaplain Stephen Hall led the opening prayer, after which the Nye County Sheriff’s Office Honor Guard presented the colors while deputy Greg Curtain sang the “Star-Spangled Banner” and the crowd recited the Pledge of Allegiance.

The presentation of a series of proclamations followed, with framed documents proclaiming Aug. 7 as Purple Heart Day in Pahrump, Nye County and the state of Nevada handed out to representatives of all four local veterans’ organizations, including the VFW, DAV, Marine Corps League and American Legion. Nye County Commission Chair Frank Carbone was joined by commissioner Leo Blundo and town and county manager Tim Sutton in distributing the town and county proclamations while Nevada Assemblyman Greg Hafen II had the honor of presenting the state proclamation.

During his remarks, Hafen was noticeably emotional. He explained that he had just learned that a Purple Heart recipient he knew well had recent lost his battle with Post Traumatic Stress Disorder and that had brought home the truly poignant meaning behind Purple Heart Day.

“My prayers are with his family, and there is no better way to honor them than to be here today to give these proclamations that have been signed by our Governor Steve Sisolak,” Hafen said. “This day evokes emotions and when you hear that a Purple Heart recipient loses his battle like that, tragic is understated.

“Many of us here, in this great nation, don’t realize the sacrifice that each of you have made,” Hafen continued, indicating all of the veterans present. “To ensure that this nation and this world stays free… And those who have received the Purple Heart medal, they truly bear the painful wounds that our country pays to ensure life, liberty and the pursuit of happiness.”

There were two guest speakers for the event, U.S. Marine Corps Major (Ret.) Tim Callahan and Nevada Department of Veterans Services Director Fred Wagar. Marine and DAV member Buddy Tisdale was scheduled to read a special poem entitled, “A Soldier Died Today”, but he was unable to make the ceremony, so Waters took over for him.

In addition to the poem, Waters read a letter that was sent to a former Nye County veteran, Pastor Wayne O’Bannon. That letter told O’Bannon about the details surrounding his brother, Doc’s, death while in service in Vietnam, details O’Bannon had never been able to uncover. It was an emotional epistle narrating a horrific event in which Doc was killed by “friendly fire”, American military that had mistaken him and his platoon for the enemy. The veteran who wrote the letter had survived and was glad to be able to finally tell O’Bannon what had happened to his brother.

Every member of the audience was moved by the letter and Waters remarked, “Reading the story of Doc O’Bannon was emotional for me because my brother was killed in Vietnam. And, it’s just emotional.”