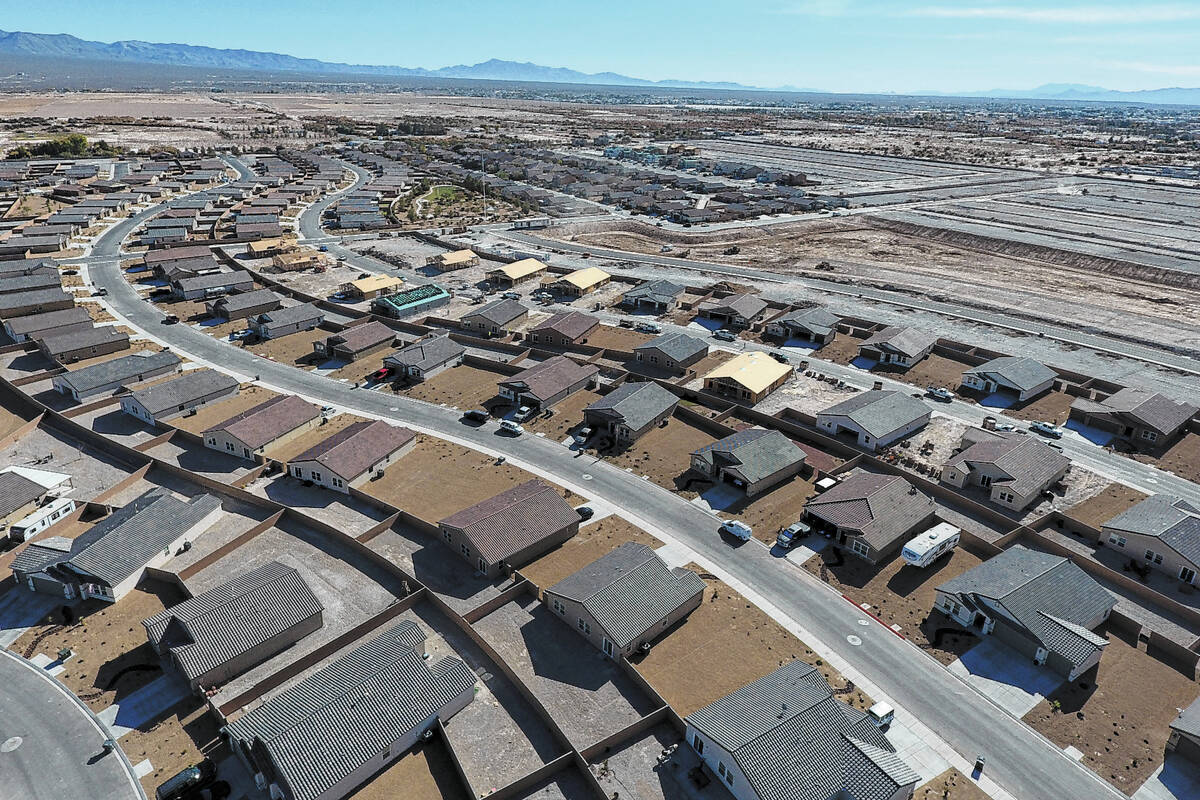 An aerial view of Burson Ranch in Pahrump on Nov. 15, 2018, where developers were restarting a rural housing project. Nye County officials are grappling with how to curb its growing housing crisis that's driven largely by low inventory, high demand, global supply-chain kinks and other factors. (Michael Quine/Las Vegas Review-Journal.com @Vegas88s)

Nye County officials are grappling with how to curb its growing housing crisis — but right now solutions are as scarce as the inventory of available homes here.

“There’s a lot of concern,” said commissioner Leo Blundo, who reported that he’s been approached by constituents facing 25- to 30-percent rent hikes during the pandemic.

The situation isn’t exclusive to fast-growing Nye County, where home prices topped $349,000 in January – up more than 27 percent over the previous year. Nearly half of households here can’t afford rents, according to U.S. Census Bureau surveys, mirroring a larger housing crisis that’s looming all across the country in rural and urban areas alike.

The Nevada Housing Division last week announced plans to issue more than $300 million in bonds to help develop more affordable housing projects in the state. Gov. Steve Sisolak said the move will help meet “a critical need” in the state. However, it won’t provide an immediate fix and likely won’t slow the rates of rising rents and home prices in Nye County communities and elsewhere.

The crisis is driven by a number of factors, including low inventory, high demand and global supply-chain kinks that have stalled construction of many new housing projects. While wages for workers are increasing across the country, inflation continues to limit the spending power of Americans.

Blue-collar workers in the service industry have especially been hard hit by rising housing costs, Blundo said. Many have been edged out of pricier housing markets and a number have relocated to rural areas like Pahrump to find some relief.

“We’re feeling the effects out of Vegas,” said Blundo, who also acknowledged the growing influx of new residents from California and elsewhere. “They’re coming here looking for their piece of the American Dream.”

That’s true for Andrew St. Hilaire, a 32-year-old retail manager who relocated to Nye County in January from the East Coast. He says it’s been nearly impossible to find decent housing.

St. Hilaire checks Zillow, a popular app that advertises both rentals and homes for sale, almost daily but said there are few options that are in his price range or near his job.

“Everywhere I look, it’s the same nine or 10 rentals advertised,” St. Hilaire said. “And most are two- or three-bedrooms. I don’t really need that. It’s just me – so I don’t need that much space – but even the few studios or one-bedroom places are above $1,000 a month.”

For now, St. Hilaire splits his time between staying with a friend who lives more than 50 miles from his job, and renting short-term Airbnbs closer to his work to cut down on his commute time.

This “balancing act” is not a permanent solution, said St. Hilaire, who often feels like he’s living out of a suitcase.

“I’ve toured a few dumps, even considered renting an RV or moving into a room somewhere — but I can’t even find that,” he said.

The “crunch” to find affordable housing doesn’t appear to be easing any time soon.

According to some regional real estate pros, Southern Nevada started 2022 riding a prolonged, cheap-money-fueled streak of rapid sales and escalating prices. It’s left sellers and landlords firmly in control of the housing market while homebuyers and renters often compete in “bidding wars” for what’s available to them.

It’s a market driven by supply and demand, Blundo says.

Homebuilders Richmond American Homes, announced that it would be branching out to Pahrump in 2022 to develop more affordable housing.

“One of the things we’re excited about continuing to hammer home is affordability,” Luke O’Loughlin, director of sales told the Las Vegas Review-Journal in January. “You’ll see more attached products and branch off to Pahrump and roll out new product lines.”

To deal with demand and also help keep costs lower, Richmond American developed a strategy to have customers avoid wait lists and lotteries that other builders implemented because of demand and supply-chain issues.

The builder started ordering materials ahead of someone purchasing, dictated the floor plan and options on the lot while allowing for the buyer to come to the home gallery and personalize it. They call it pre-plotting, O’Loughlin told the Review-Journal.

But while adding more housing might seem like an obvious short-term solution, it creates long-term problems for desert communities in Nye County that have limited and dwindling water supplies.

“On paper, we’ve already over-developed,” said Blundo, who anticipates future legal battles over water rights as the community continues to grow. “As they say, whiskey’s for drinking; water’s for fighting.”