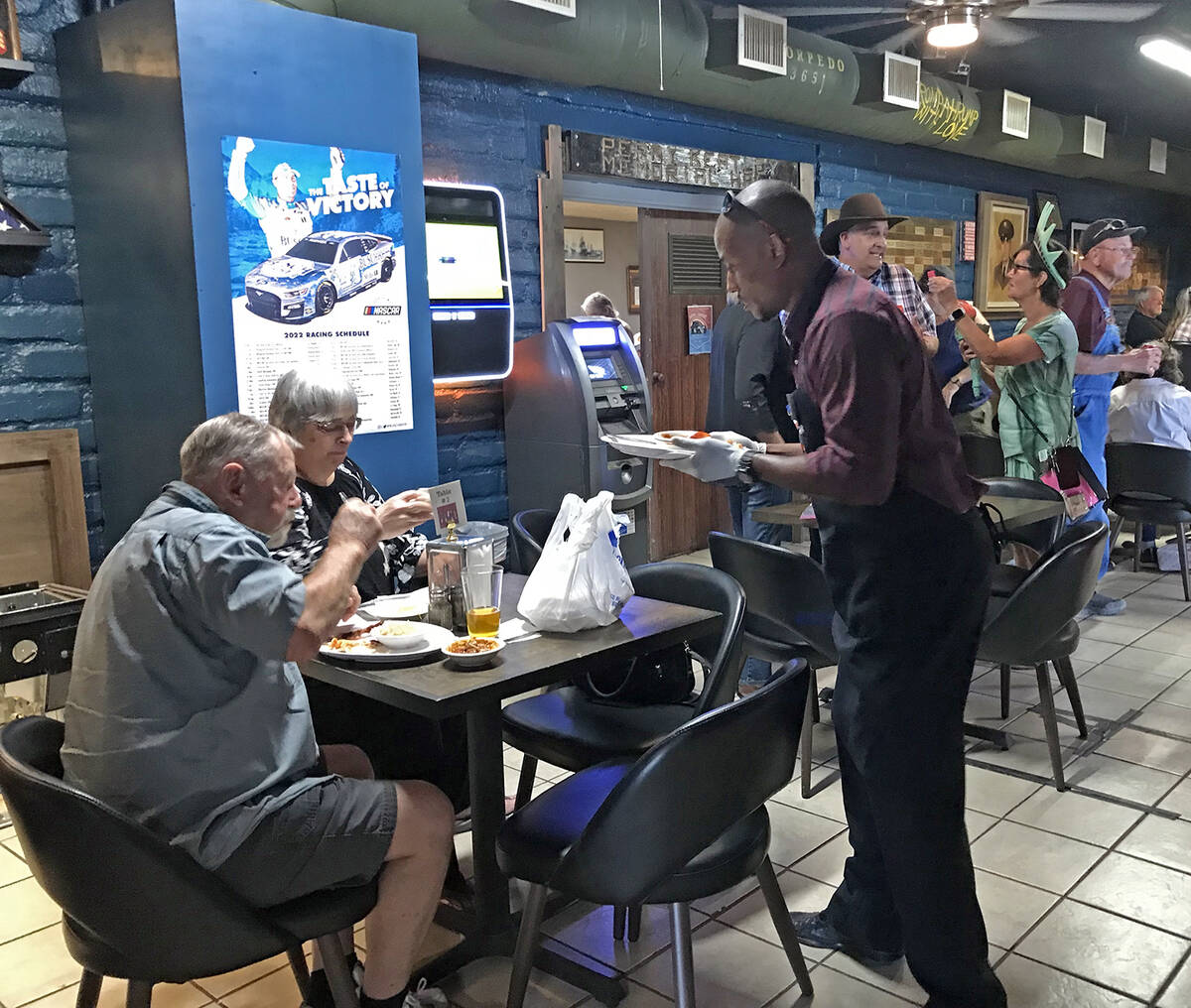 Robin Hebrock/Pahrump Valley Times A volunteers is pictured serving a plate to patrons at the "Support Our Troops Rib Extravaganza." 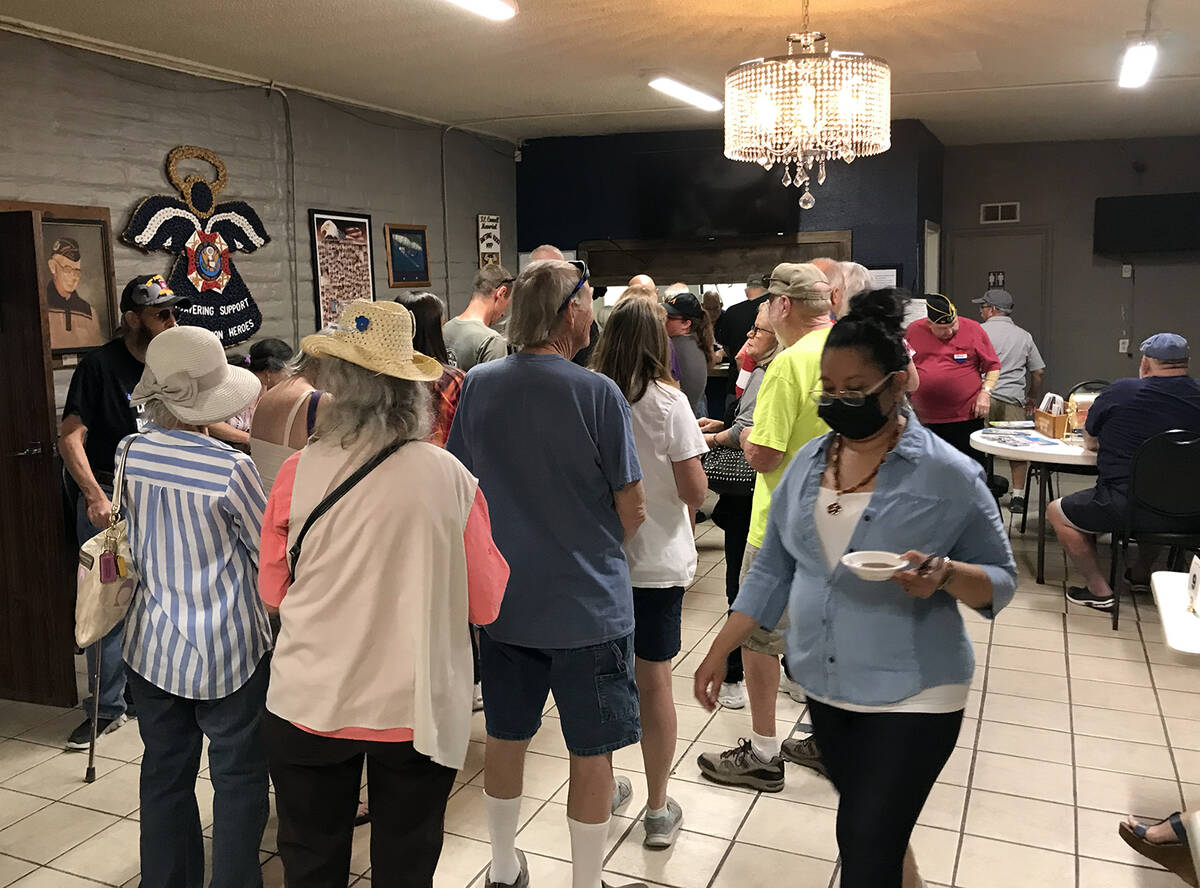 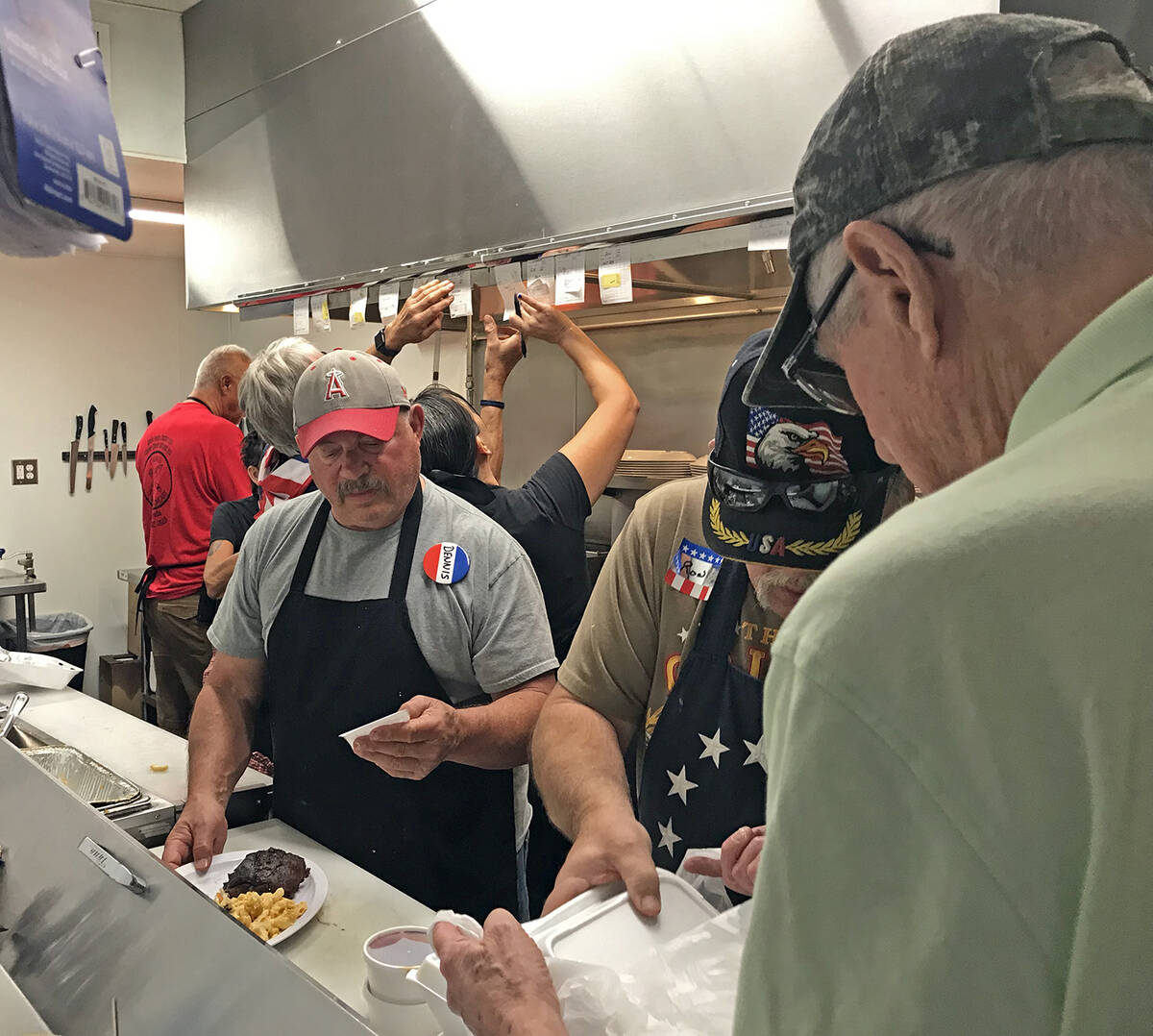 Robin Hebrock/Pahrump Valley Times A peek inside the kitchen during the Rib Extravaganza revealed a very busy crew of volunteers working to get meal tickets fulfilled. 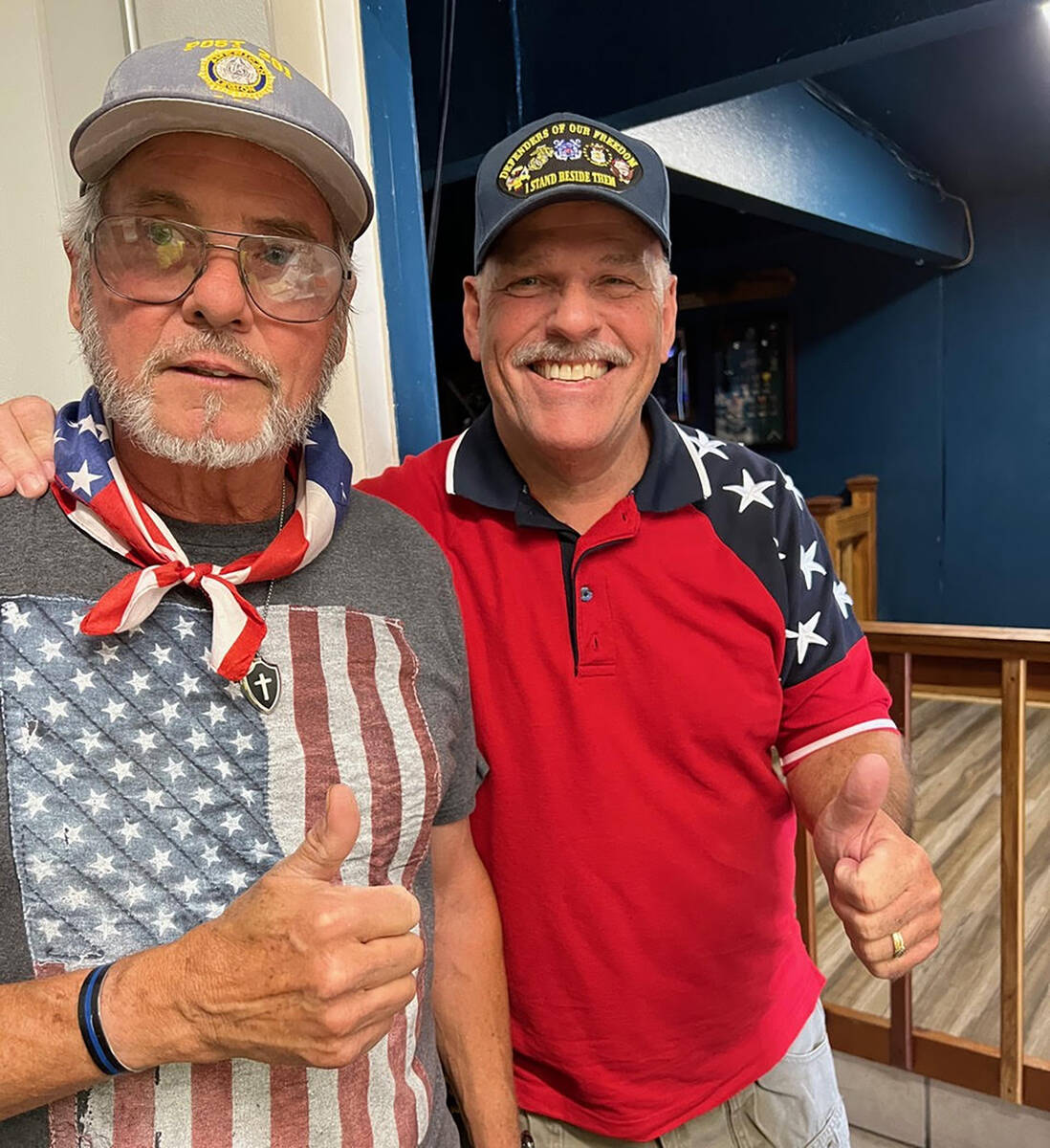 Special to the Pahrump Valley Times Bruce Schoenberger is pictured with Nathaniel Miller, who made a generous $500 donation to the Rib Extravaganza after reading about the event in the newspaper. 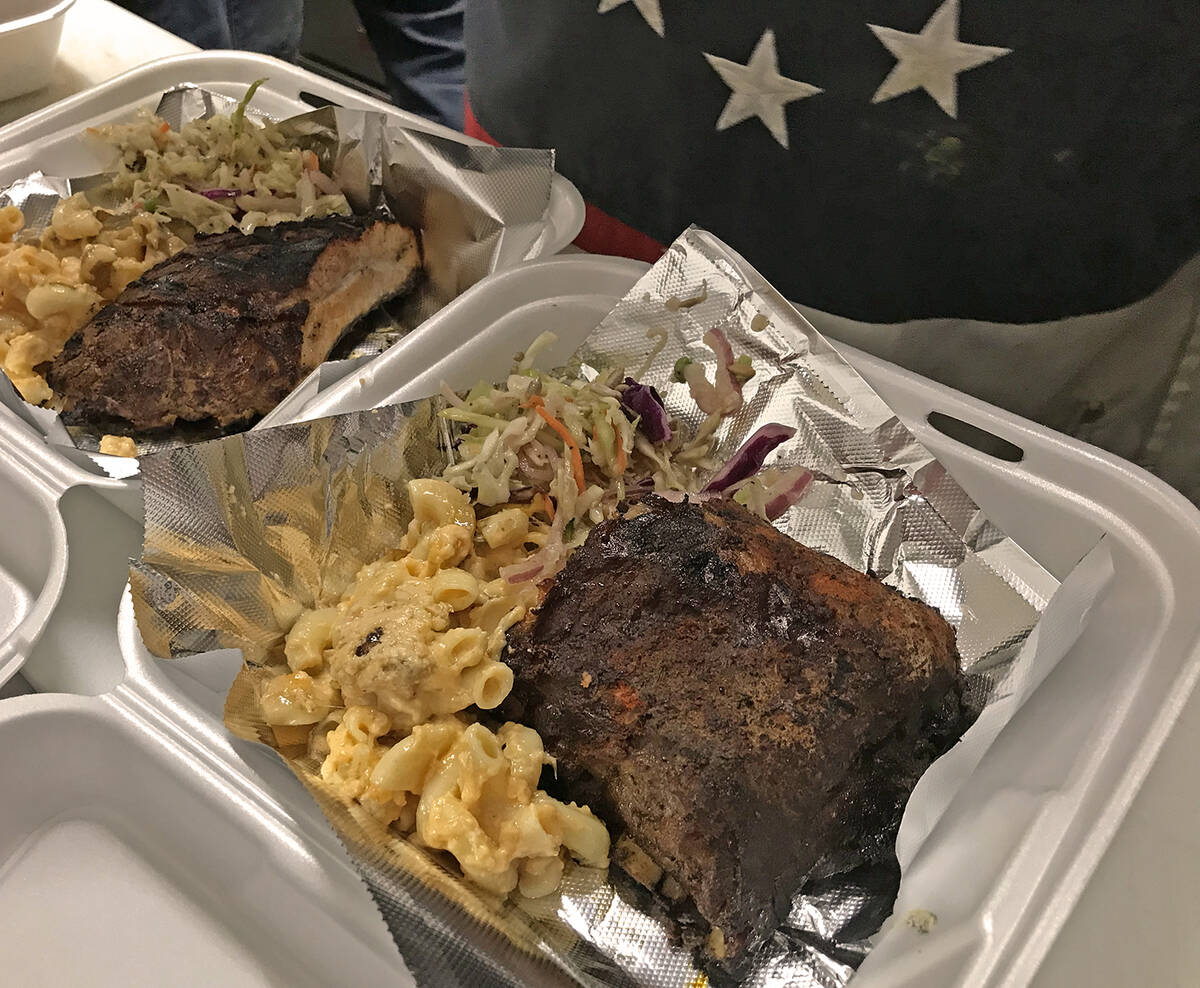 Robin Hebrock/Pahrump Valley Times Baby back ribs, smoked macaroni and cheese and tangy coleslaw were the stars of the Rib Extravaganza. 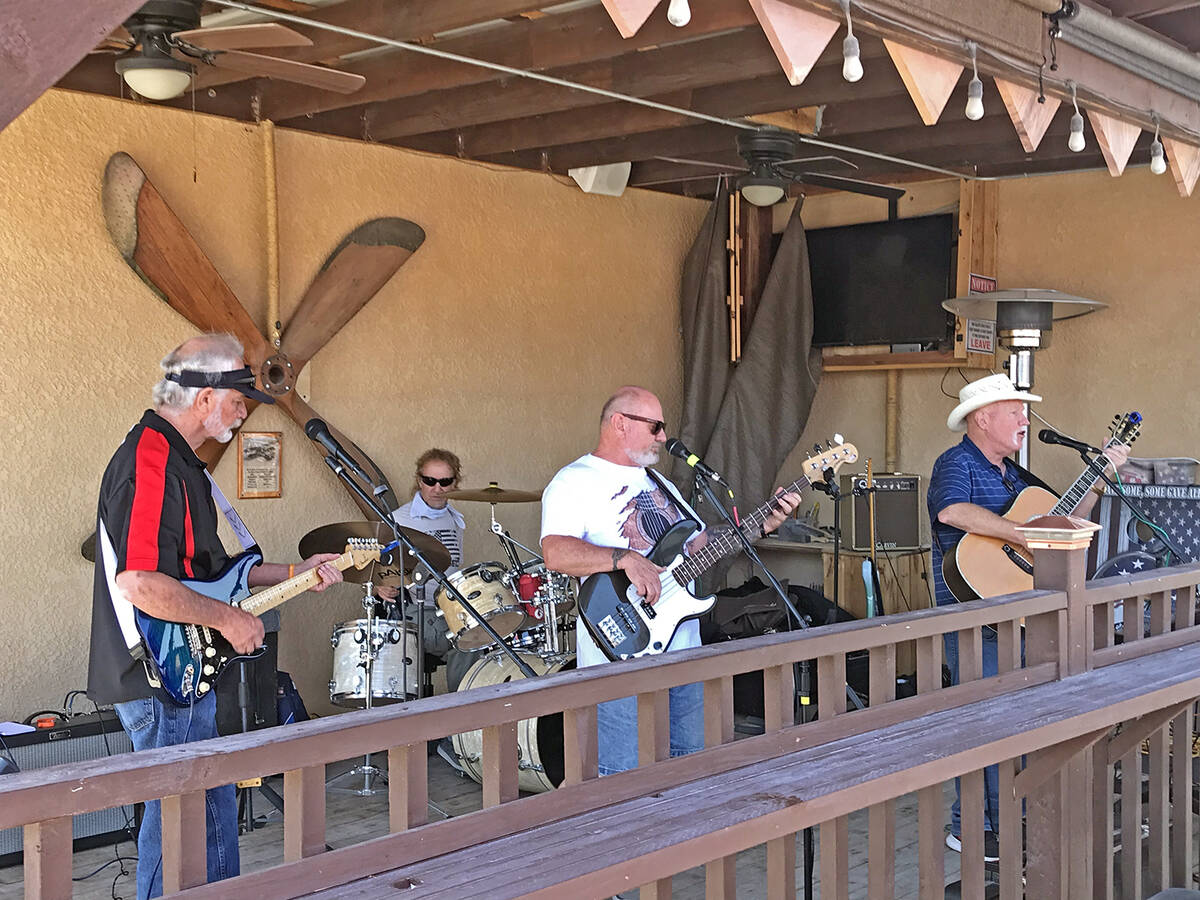 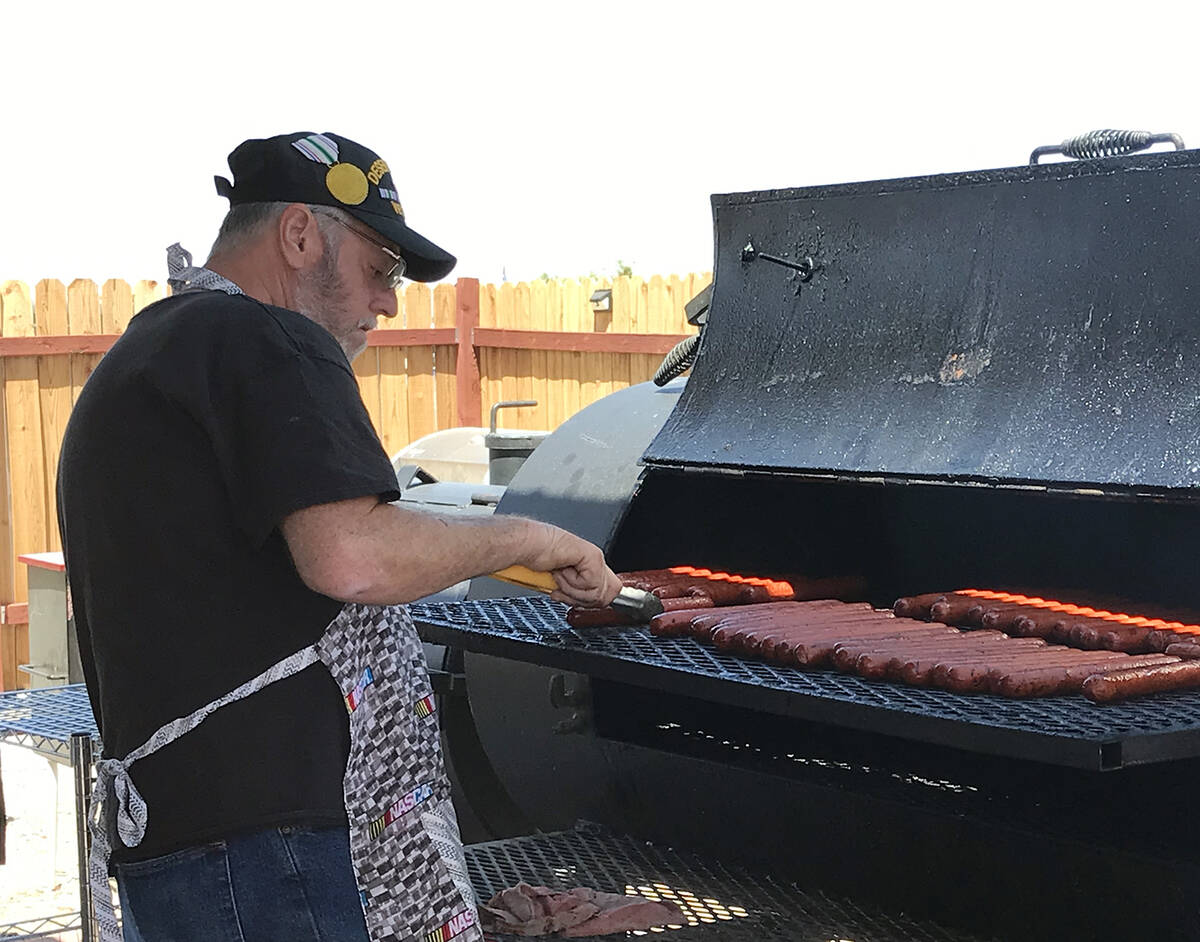 Robin Hebrock/Pahrump Valley Times Giant hotdogs were being grilled up outside on the patio during the Rib Extravaganza. 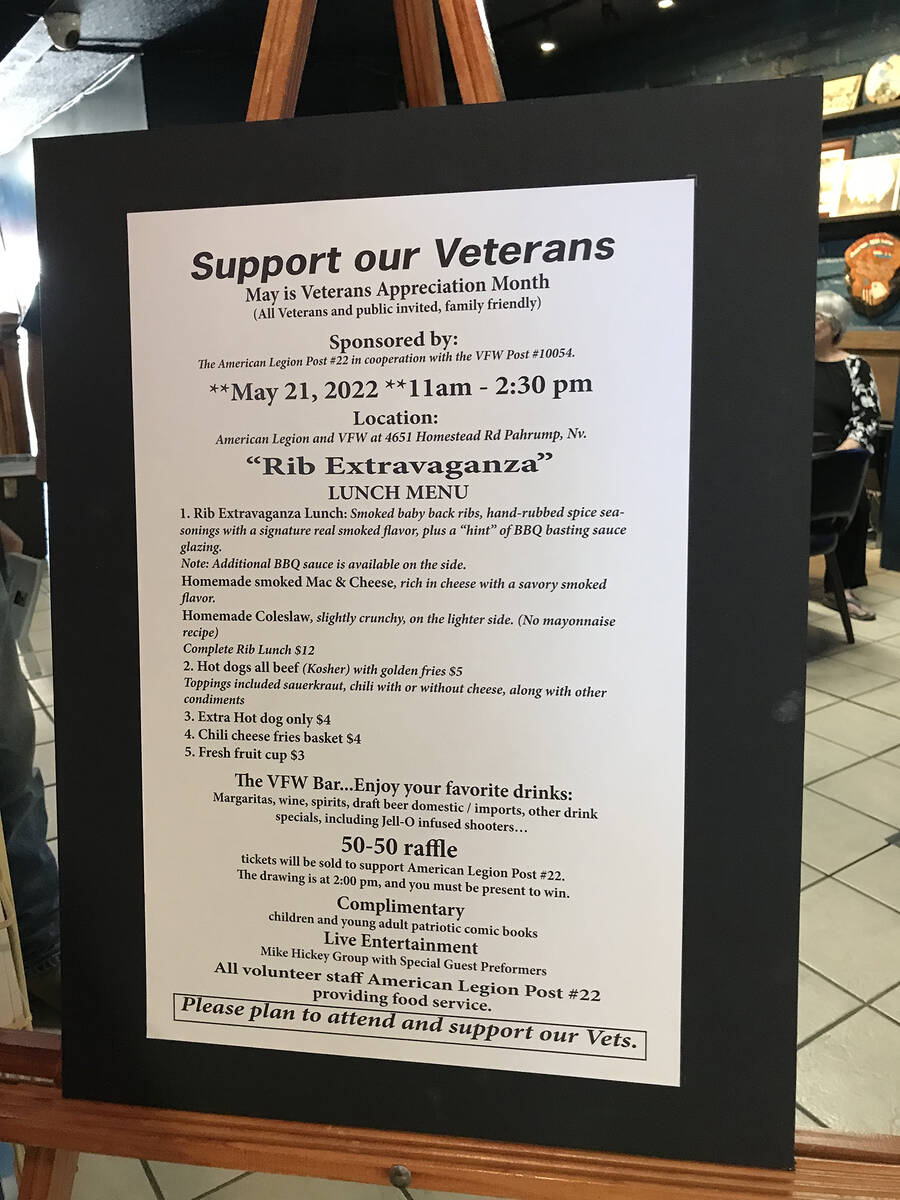 Robin Hebrock/Pahrump Valley Times A full menu of delicious offerings had plenty to tempt appetites at the Rib Extravaganza. 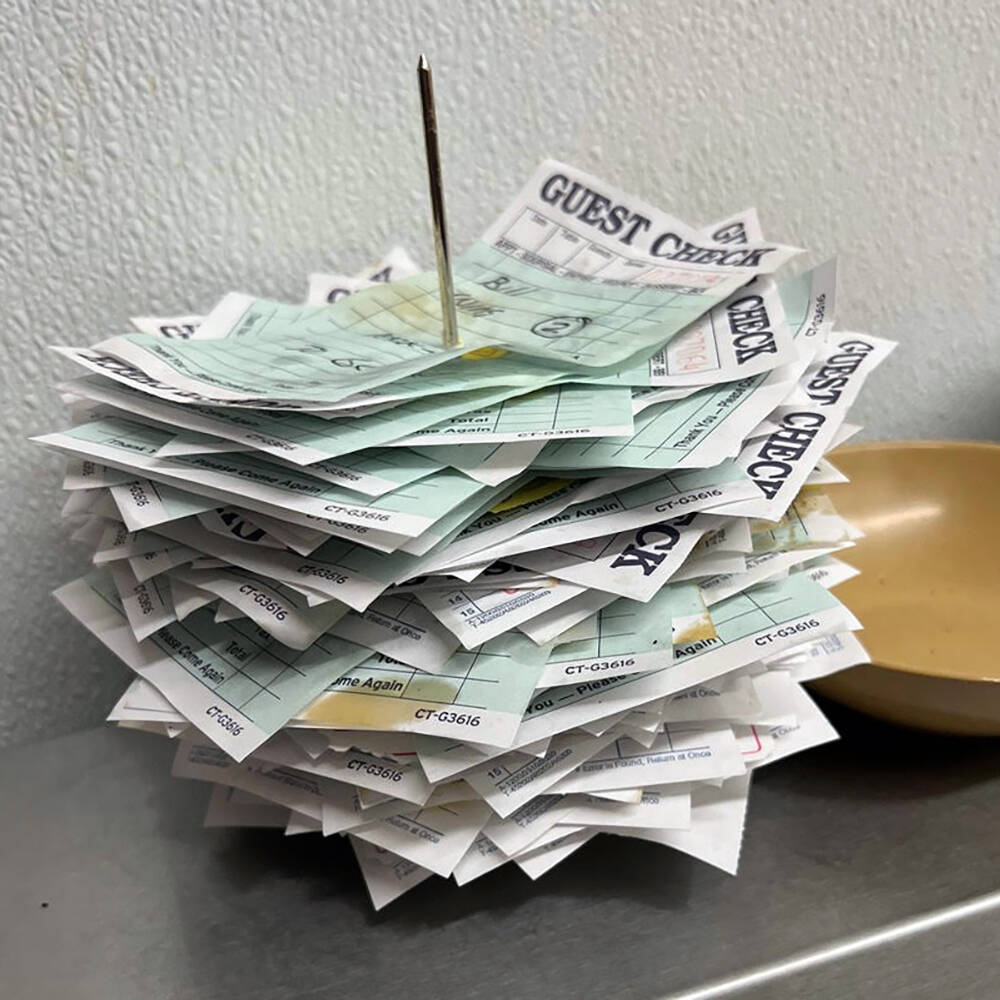 Special to the Pahrump Valley Times Meal order tickets piled up during the Rib Extravaganza and the event was so popular, organizers ran out of ribs and hotdogs and had to resort to serving shrimp and chicken fingers.

Hosted Saturday, May 21 by the American Legion Post #22, the Rib Extravaganza was meant as a way to mark National Military Appreciation Month while bringing together both former military members and civilians alike. With the aid of the Veterans of Foreign Wars Post #10054, as well as both organization’s auxiliaries, American Legion members and volunteers put on a veritable feast for the senses.

In addition to a mouthwatering menu that attracted many sniffs of admiration, there were plenty of cold beverages to enjoy. A live band out on the back patio deck provided entertainment for both ears and eyes and the weather itself seemed to be celebrating. Attendees were already crowding into the post by 11:30 a.m. when the Pahrump Valley Times arrived and judging from the atmosphere, everyone was having a blast.

American Legion member and event organizer Bruce Schoenberger was ecstatic about the outcome of the event, later telling the Times that the group managed to not only meet its set goal of $2,000, but to exceed it by nearly double. More than $4,100 was raised before and during the Rib Extravaganza, leaving Schoenberger raving about the generosity of the local community.

Miller’s nonprofit is based in California but recently moved to the valley. Upon reading about the Rib Extravaganza in the Times, he reached out to offer his assistance. On top of his financial contribution, Miller donated seven USA-made pickaxes which were auctioned off at the event, bringing in over $300.

“Other advance donation came in ranging from $25 to $100,” Schoenberger said. “We had a team of Bob Mazetta and Gail Vaishvila who sold meal tickets and collected additional donation to provide free meals to the veterans. Our regular, paid lunch purchases came in at about $300 and there were approximately $280 in tips for the volunteers, which the volunteers then donated to us! And we had our very own ‘Lady Liberty’ Pamela Morgan teaming up with Terry Stanton and Sharon Mazetta, along with Bob and Gail, to be our 50/50 raffle team.”

The event turned out to be extraordinarily popular, so much so that Schoenberger said they ended up running out of both baby back ribs and hotdog plates. However, much like any military contingent would do, the group found a solution and started serving up deep-fried shrimp and crispy fries along with chicken fingers, to ensure that no one was left hungry.

“I am so proud of our community’s effort and the many volunteers, not only the general public but members of the American Legion, VFW, American Legion Auxiliary and our kitchen staff volunteers, who all worked so very hard, including brand new members that signed up just days before the event as a result of the newspaper articles regarding the Rib Extravaganza,” Schoenberger said with evident delight.

“My thanks to everyone involved on behalf of our hero veterans, and a special thanks to Mike Hickey, who donated the band for the event, they are heroes to the heroes, so a big thank you,” he continued, concluding, “I think the most touching thing was this was, with only three days before the event, the community was challenged by an article in the Times to support the veterans by providing free meals and people stepped up. Because of that, we were able to have prepaid meal tickets for our heroes so hundreds of veterans could enjoy their lunch for free.”

The American Legion Post #22 shares its headquarters with the VFW Post #10054 at 4651 Homestead Road. New members are always welcome. Meetings are held the third Thursday of each month at 6 p.m.