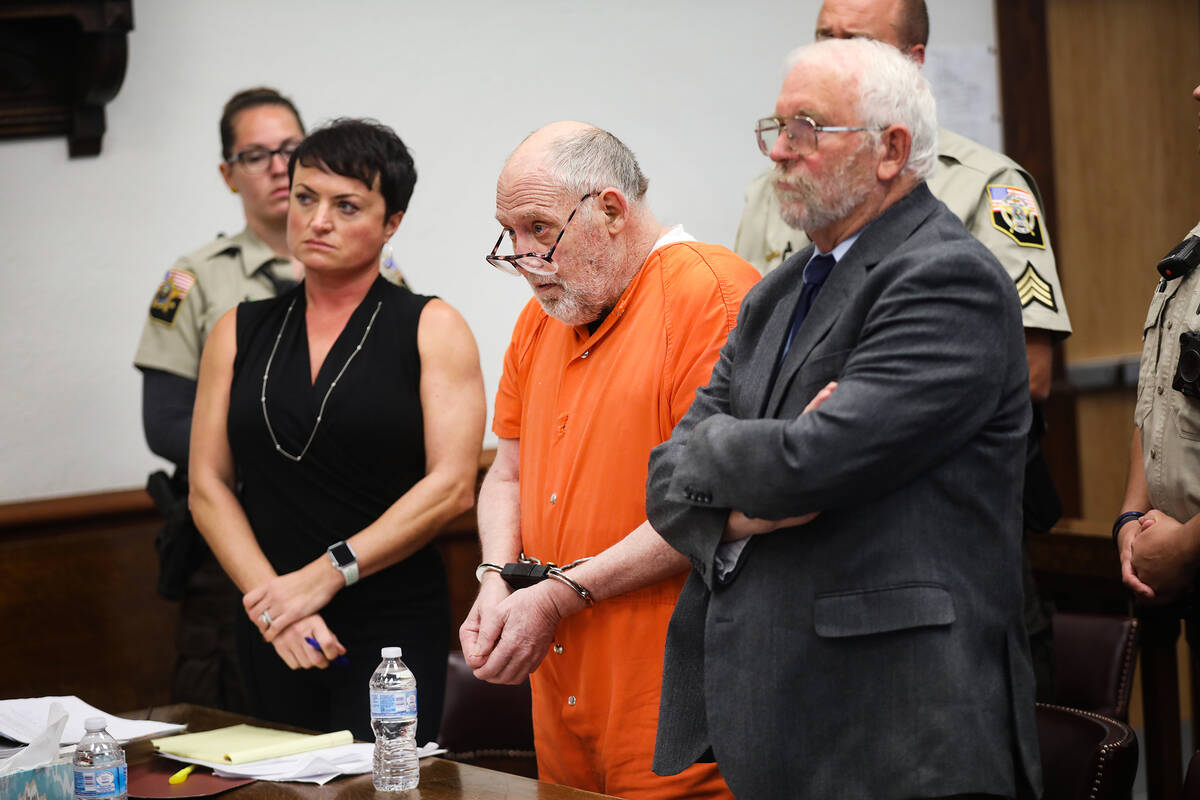 John Dabritz listens as the judge hands down a sentence of life in prison without possibility of parole for the killing of Nevada Highway Patrol Sgt. Ben Jenkins. The sentence was imposed on Tuesday, Sept. 28, 2021, at the White Pine County Justice Court in Ely, Nev. (Rachel Aston/Las Vegas Review-Journal) @rookie__rae 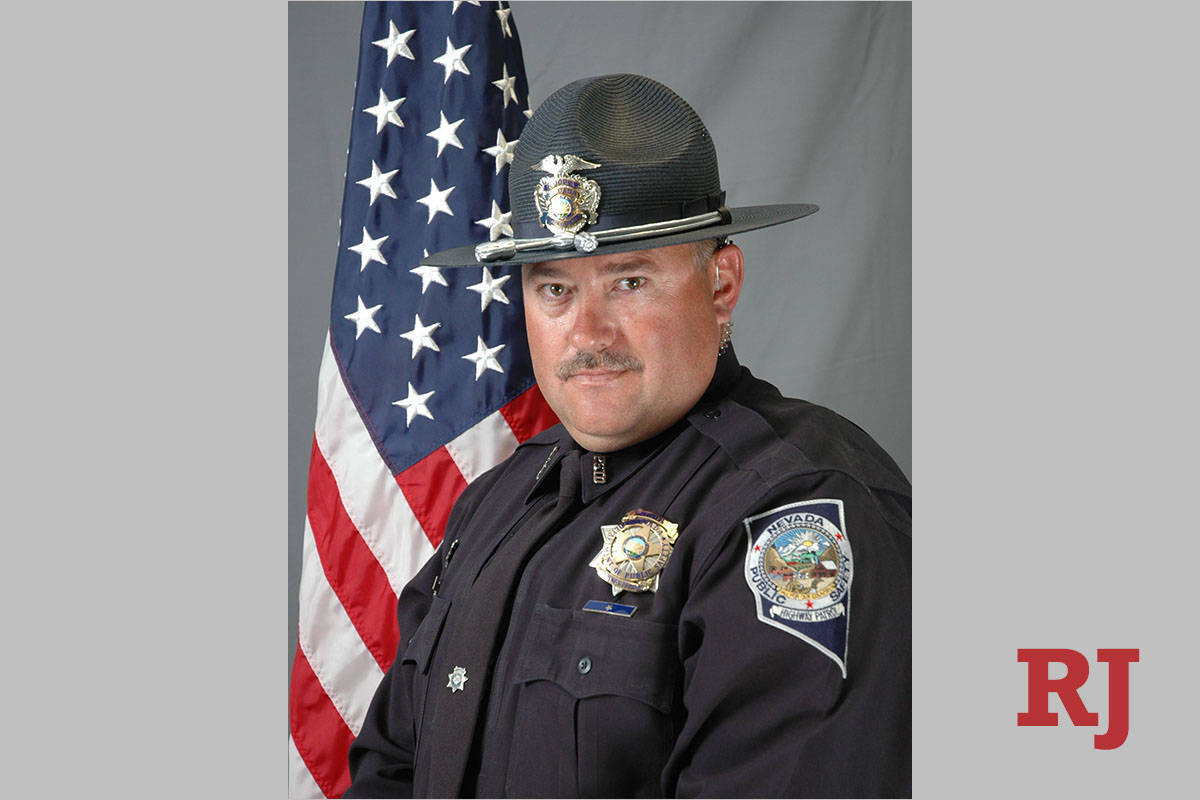 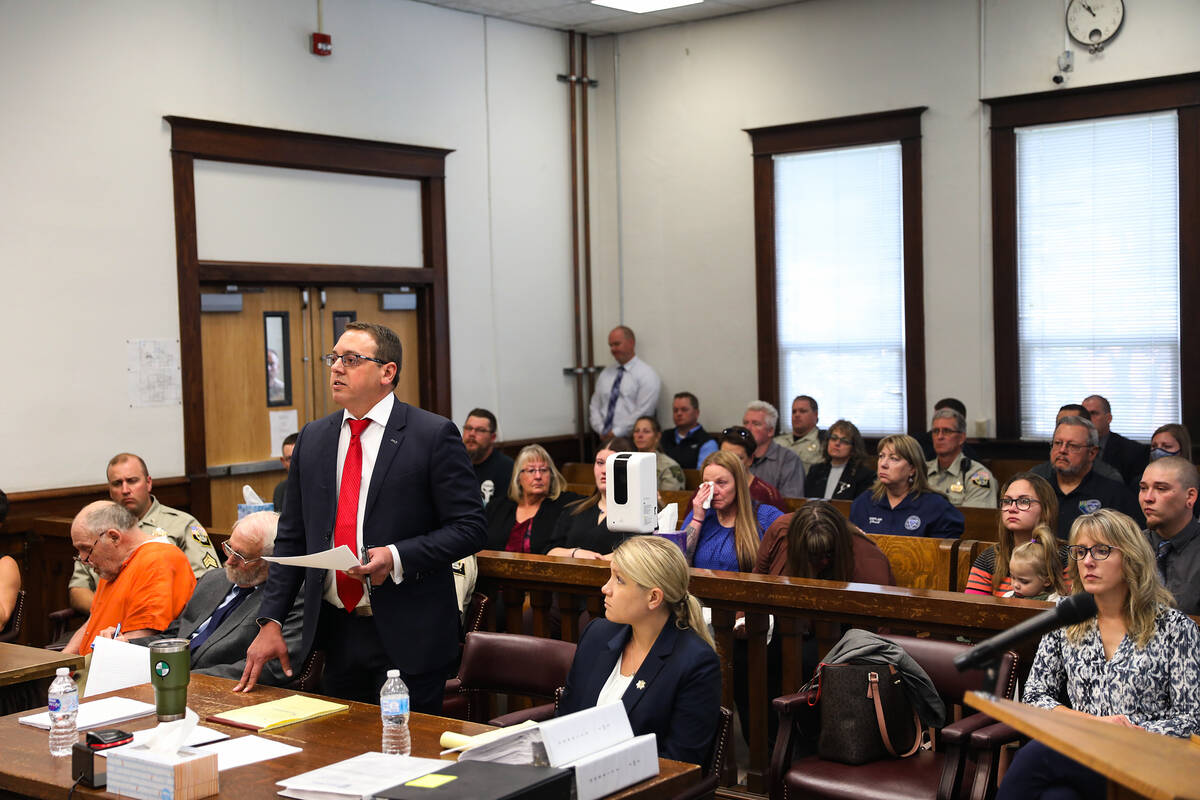 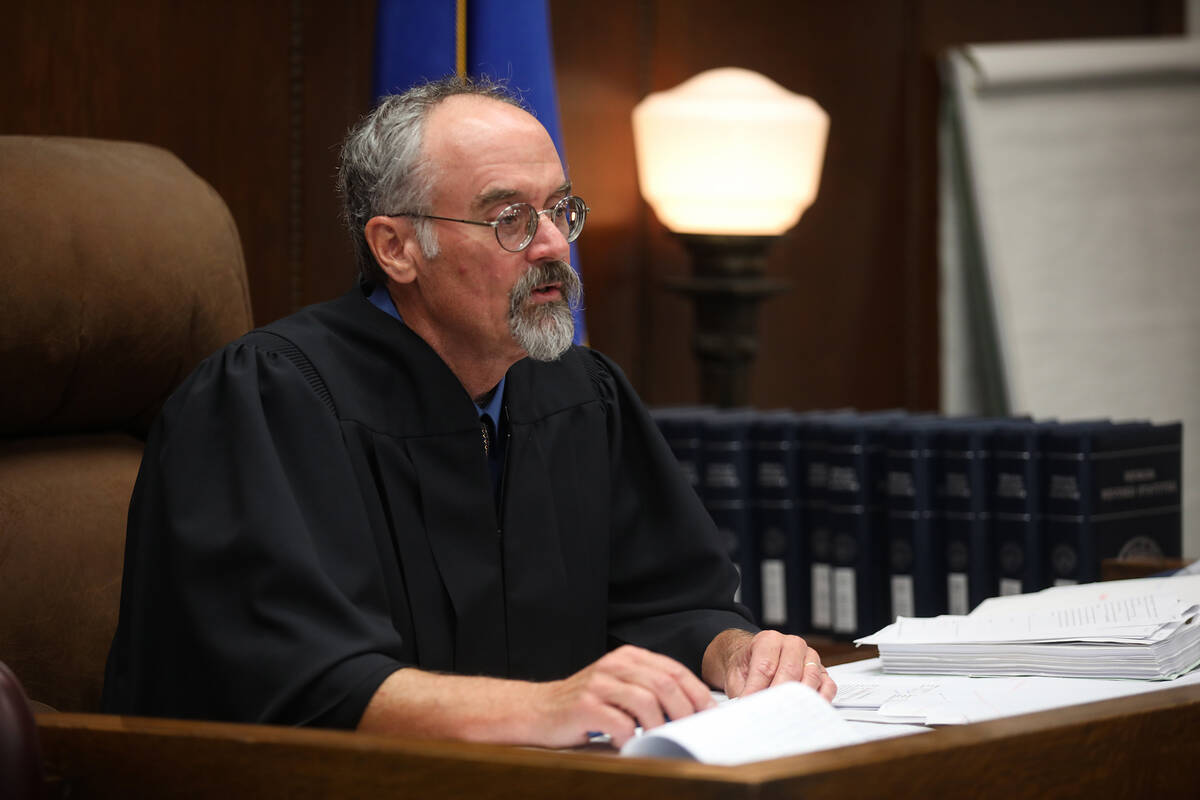 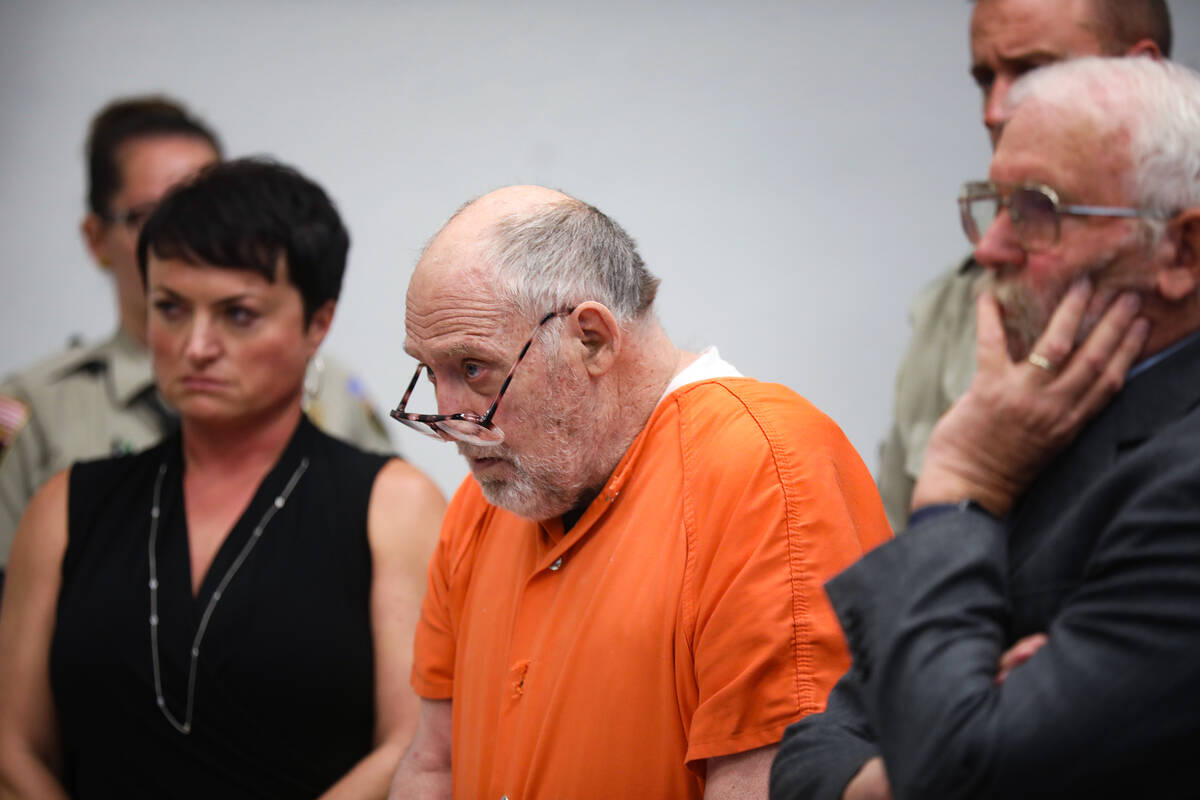 John Dabritz listens as the judge hands down a sentence of life in prison without the possibility of parole for the killing of Nevada Highway Patrol Sgt. Ben Jenkins. The sentencing hearing was held on Tuesday, Sept. 28, 2021 at the White Pine County Justice Court in Ely, Nev. (Rachel Aston/Las Vegas Review-Journal) @rookie__rae 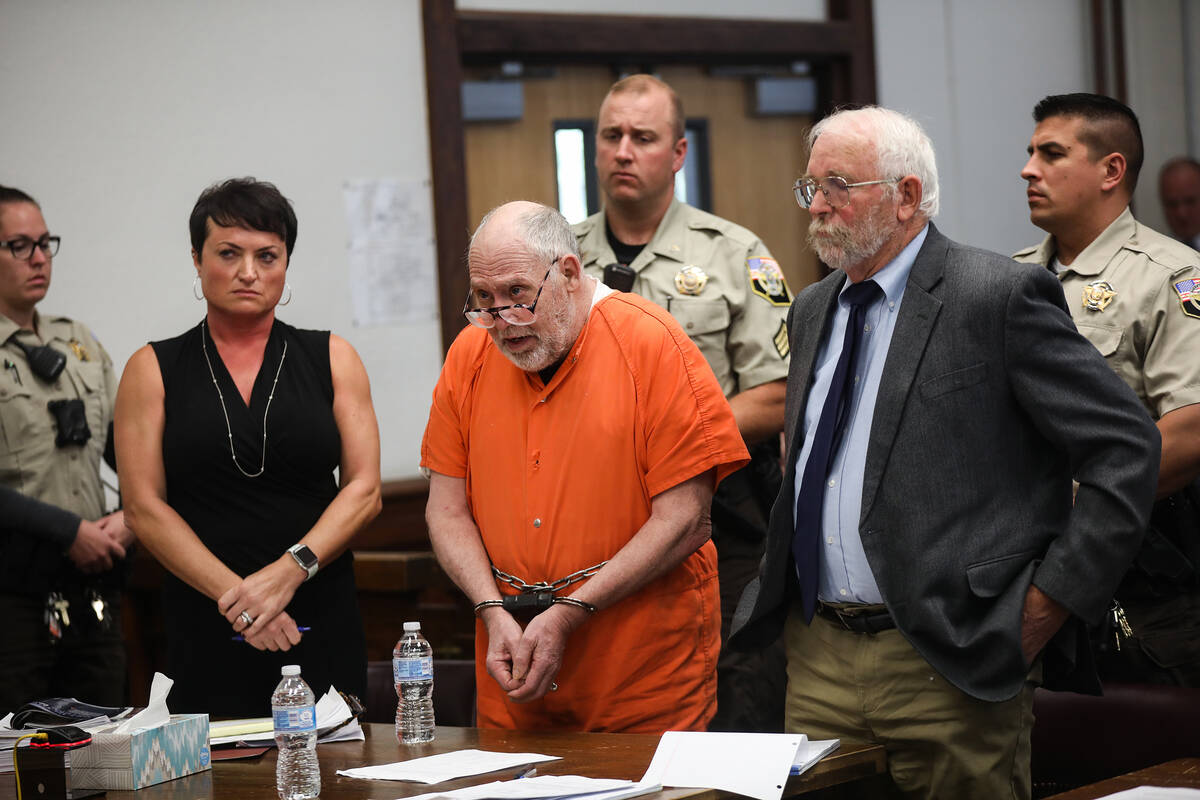 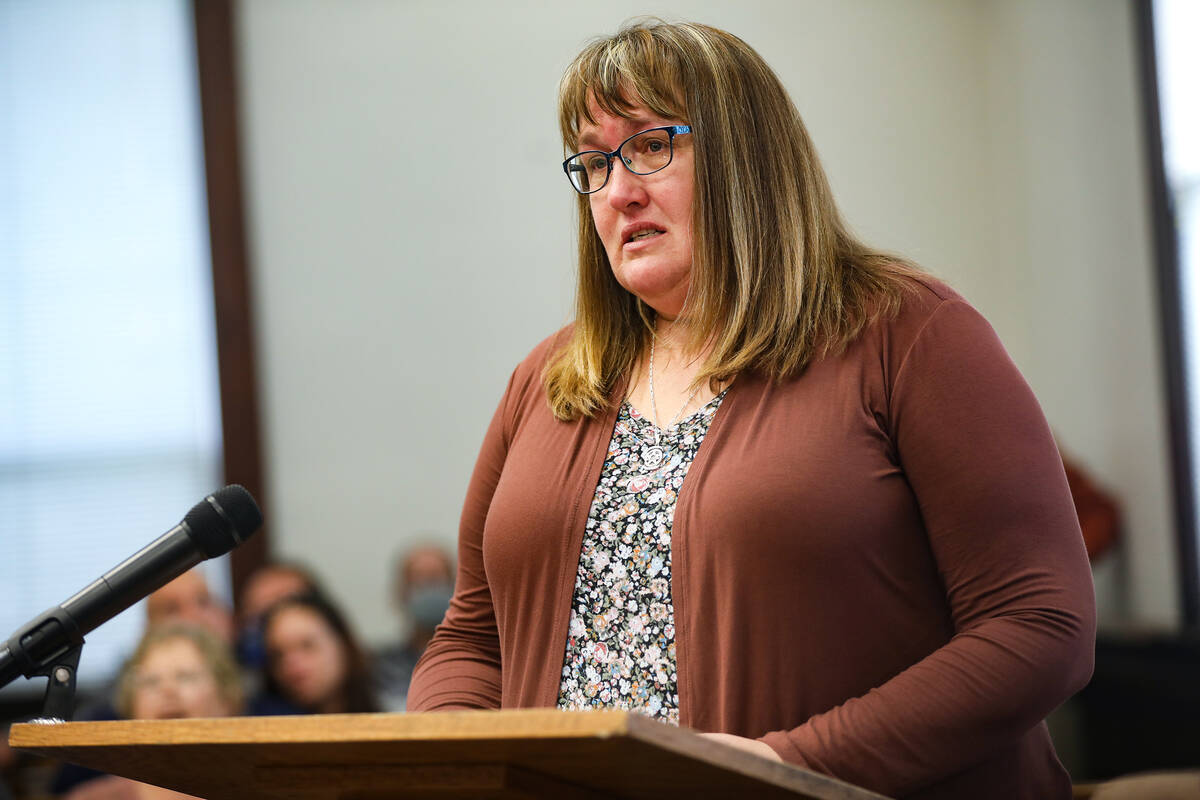 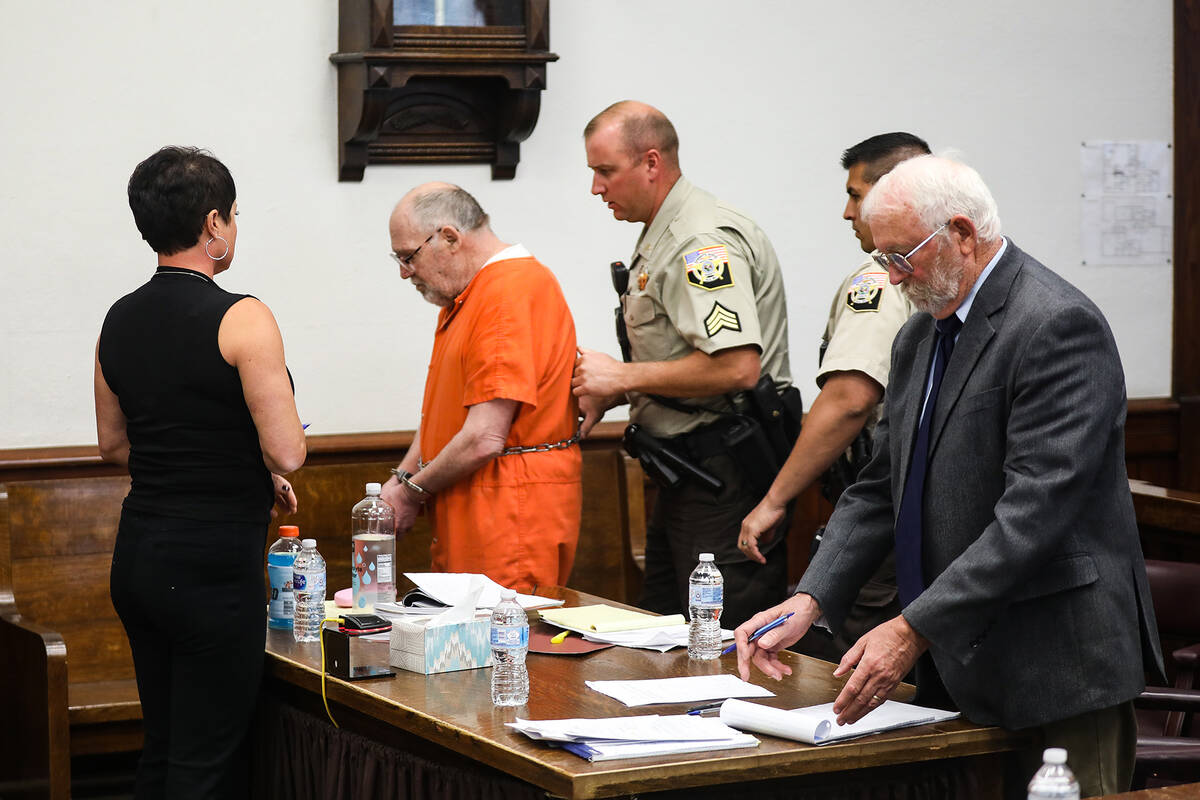 John Dabritz is led out of the courtroom after receiving a sentence of life in prison without the possibility of parole for the killing of Nevada Highway Patrol Sgt. Ben Jenkins. The sentencing hearing was held on Tuesday, Sept. 28, 2021, at the White Pine County Justice Court in Ely, Nev. (Rachel Aston/Las Vegas Review-Journal) @rookie__rae 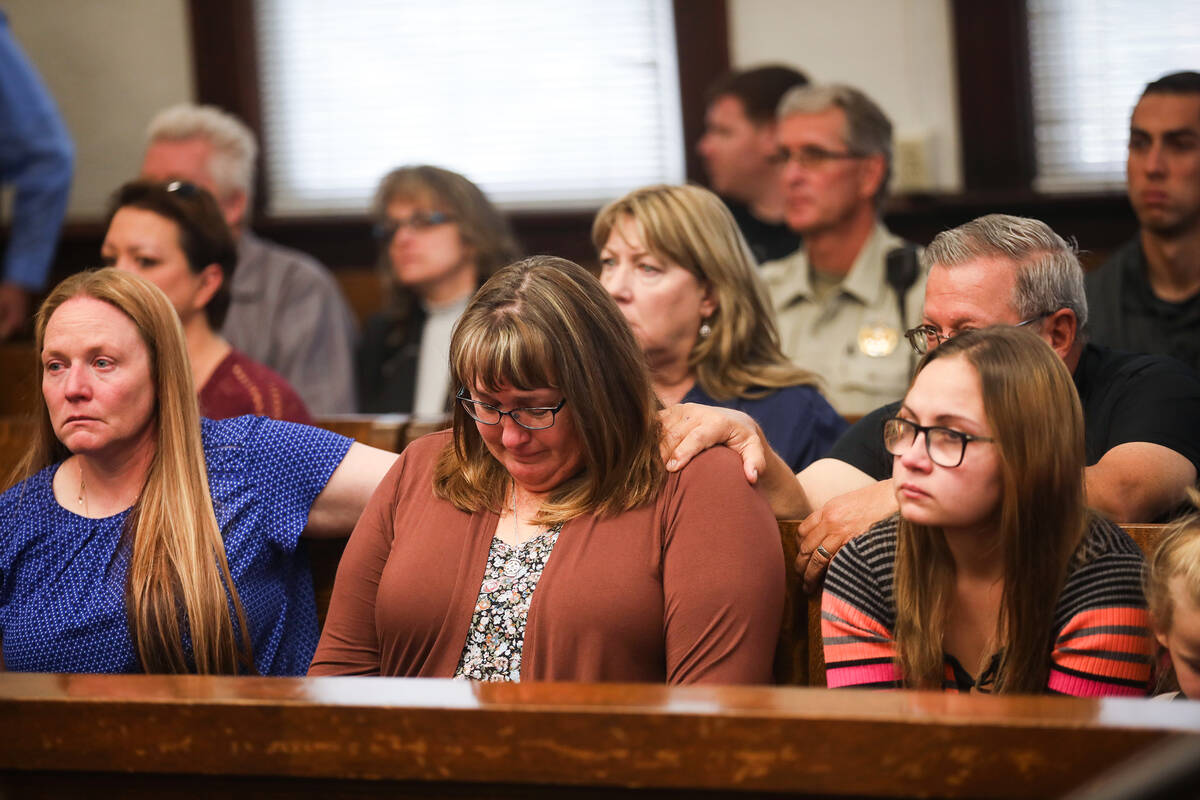 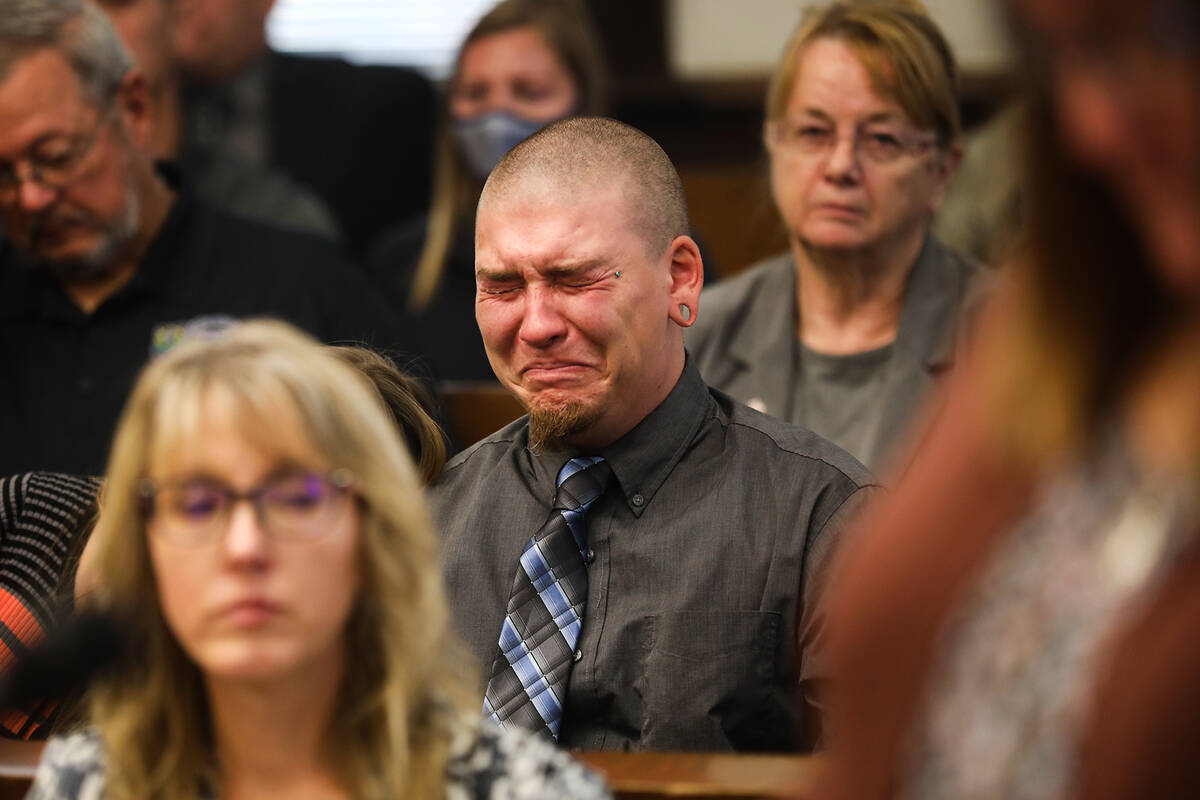 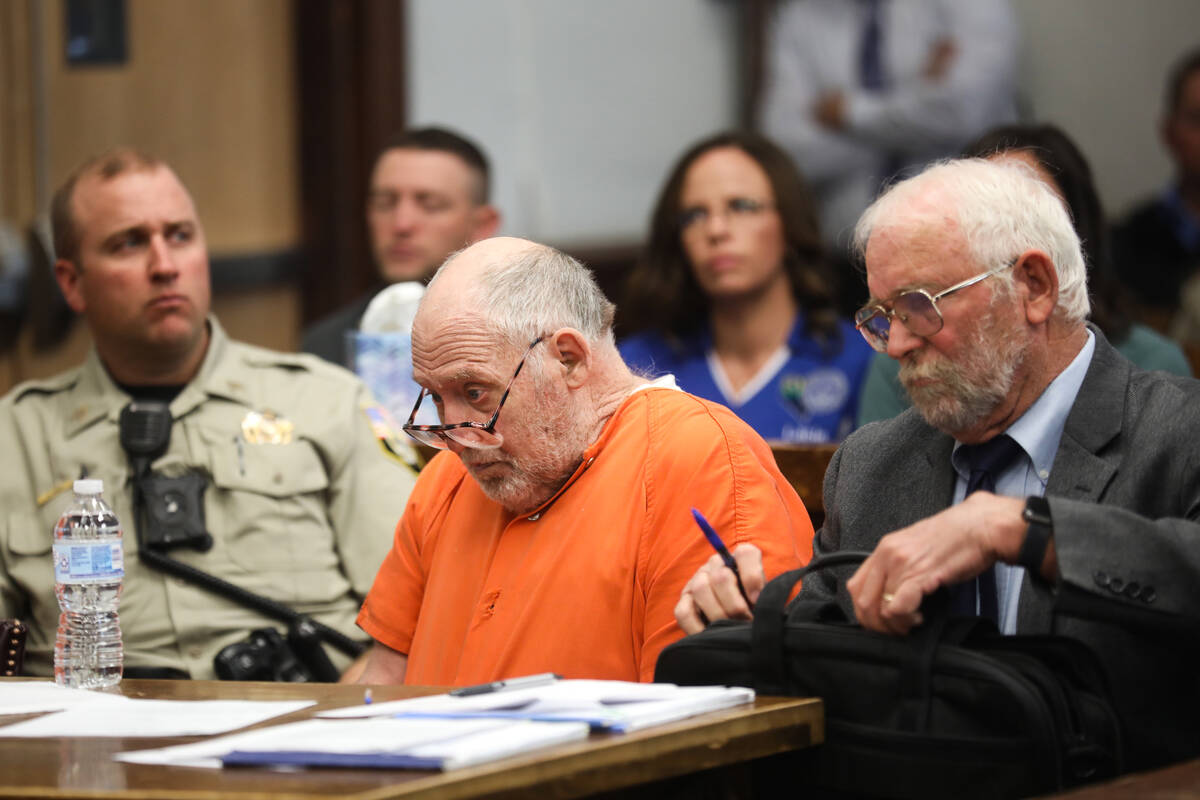 ELY — A 67-year-old mentally ill man will spend the rest of his life in prison for the ambush shooting last year of Nevada Highway Patrol Sgt. Ben Jenkins, the agency’s first line-of-duty death in more than a decade.

In handing down the sentence on Tuesday, White Pine County District Judge Steve Dobrescu told defendant John Dabritz: “I’ve been in this business for 35 years, and over 20 years on the bench, and I’ve only seen a couple of cases that were so horrific.”

Dabritz was not granted the possibility of parole.

“It’s haunting,” the judge said. “What you did that day was pure evil. Whatever was driving or not driving you, it makes no difference. You took the life of a man who stopped to help you.”

Jenkins, a 47-year-old married father of four, was shot and killed just before dawn on March 27, 2020, shortly after pulling over on a remote stretch of U.S. Highway 93. There, he found Dabritz in the driver’s seat of a pickup truck. He had run out of gas.

After the shooting, Dabritz stripped the sergeant of his uniform and weapon and set fire to the body. Then, as the sun rose over the snow-capped mountain ranges north of Ely, Dabritz climbed into the sergeant’s patrol vehicle, turned up the radio and sped away, prompting a manhunt that drew help from at least five Nevada law enforcement agencies and the Utah Highway Patrol.

One year and seven months later, Dabritz directly addressed the Jenkins family for the first time at his sentencing hearing.

“I know what I did was wrong. Everything is because of me, and I didn’t want to squirrel my way out of this, and I really apologize,” he said Tuesday. “It was a horrible, horrible thing that happened. I apologize to the court and to the officer’s family. I may be spending the rest of my life in jail, but they could have had more of that life with that person.”

Behind him, in a packed courtroom gallery, the sergeant’s relatives and friends sobbed. A few shook their heads.

The outcome of the emotional sentencing hearing was expected. In July, Dabritz withdrew his initial plea — not guilty by reason of insanity — and pleaded “guilty but mentally ill” to first-degree murder, third-degree arson, grand larceny of a motor vehicle and grand larceny of a firearm.

In exchange, White Pine County prosecutors agreed to pull capital punishment off the table. The deal also eliminated the need for a trial, which would have taken place this month in Ely.

The plea bargain was made in close consultation with the sergeant’s family members, according to White Pine County District Attorney James Beecher, with the intention of providing “swift and final closure.”

On Tuesday, in her first public statement since the killing, Jodi Jenkins revealed that she has been criticized for striking a deal with her husband’s killer.

“Some people believe that Ben deserves better, and I can agree with them that there is some truth to that,” she said through tears. “He did not deserve to have his life cut short and die in this horrific manner. There is no punishment severe enough to bring us the justice that Ben truly deserves.”

As she spoke, her son Michael, seated just several feet away in the gallery, tried to stifle his sobs.

“But I have always said that I will do everything in my power to protect our children. I don’t want their last memories of their dad to be of him making his last radio calls, and photographic evidence from the scene where his life was tragically ended,” Jodi Jenkins said.

She was referring to the body camera and dashboard camera videos that captured her husband’s final moments. Sgt. Jenkins himself had alerted authorities about the shooting.

“Officer shot, officer shot!” he shouted into his radio that morning as he collapsed. “I’ve been shot in the right shoulder!”

In closing, Jodi Jenkins added: “I know that Ben would not want us to suffer through the trauma of a death penalty trial.”

On Tuesday, neither Dabritz nor his team of attorneys asked the judge for leniency. They believe he is safer inside a prison, even if it means he will die behind bars.

“He isn’t safe out there,” Kirsty Pickering, one of his lawyers, said. “John is upset. He blames the mental health system for failing him, and I tend to agree.”

In the days after the killing, the Las Vegas Review-Journal learned that Dabritz had long suffered from bipolar disorder and alcoholism, and had spent the weeks leading up to the shooting on a paranoid quest to warn people of his theory that COVID-19 was spreading through the water and sewer systems.

His efforts landed him at William Bee Ririe Hospital in Ely on a legal mental health hold before he was flown on about March 14, 2020, to Desert Parkway Behavioral Healthcare Hospital in Las Vegas.

He was released around March 20, despite getting into a fight with another patient within the 12 hours prior to his discharge, psychologist Herbert Coard said Tuesday.

“The thing is, they let him out, and they really shouldn’t have. He was totally out of his mind, if you know what I mean,” the defendant’s younger brother, Karl, previously told the Review-Journal. Desert Parkway has not responded to multiple requests for comment.

In addition to Coard’s testimony, a psychiatrist who treated Dabritz after his arrest previously testified that the defendant had a “very classic presentation” of bipolar disorder. Symptoms that led to the diagnosis, according to Dr. Steven Zuchowski, included paranoia, extreme irritability and anger at the time of the shooting “that was very difficult for him to control and would have been impossible for someone to fake in any kind of sustained way.”

From her office in Ely on Tuesday afternoon, Pickering told the Review-Journal: “This should never have happened, and it could have been so much worse, but when almost all my clients as a public defender need mental health evaluations, medications and follow-up treatment, and I have no access to resources, I am very limited in what I can do. I worry that something worse will happen in the future. From my perspective, things haven’t got better.”

After the hearing, Dabritz, shackled and dressed in orange jail garb, was swiftly led away by officers.

The last sliver of orange disappeared through the doorway, and Sgt. Jenkins’ relatives stood up to embrace one another.

Had he survived the shooting, the sergeant would have retired in the coming years. At the time of his death, he had been working as many overtime hours as possible to save up for cross-country travel in his RV and afternoons leisurely spent with the “apples of his eye” — his grandchildren. His sixth grandchild, a girl he will never meet, will be born in the next two weeks.