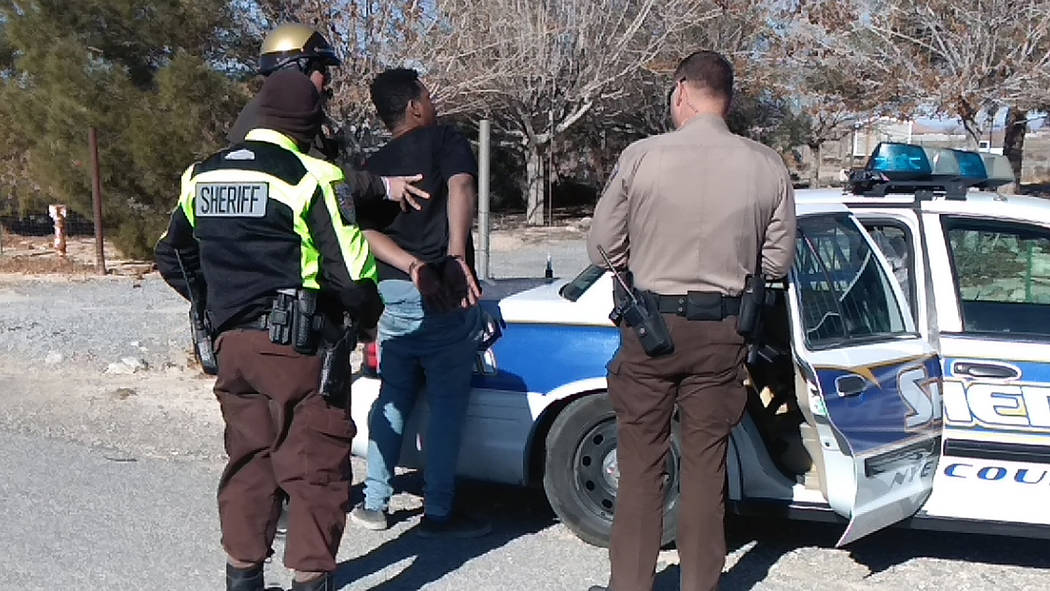 Selwyn Harris/Pahrump Valley Times Nye County Sheriff’s deputies prepare to transport suspect Christopher Graham after the man was arrested on a New Year’s Day DUI and hit and run charge. Graham was taken into custody at a residence along the 4600 block of East Paiute Blvd, roughly six miles from where the alleged incident occurred. No injuries were reported.

A local man was arrested on DUI and hit and run charges on New Year’s Day.

As stated in a Nye County Sheriff’s Office declaration of arrest document, Deputy Britton Hoffmann was dispatched to a late morning report of a hit and run along East Carberry Lane near a local bar.

The description of the fleeing vehicle, which struck a fence and mailbox, was a red in color sedan bearing an Idaho plate, according to the document.

“The plate returned to a red in color Buick Century registered to Christopher Graham,” the document stated. “While en route to the Carberry address, a call for a reckless driver in a red vehicle bearing the same Idaho plate was in the area of Kellogg Road and Quarter Horse Avenue.”

The arrest document also stated that the person who reported the hit and run actually began following Graham to a residence on the 4600 block of Paiute Blvd., roughly six miles from where the alleged hit and run took place.

“Upon arrival at the Paiute Blvd. residence, deputies observed a red in color Buick matching the description of the hit-and-run reckless vehicle,” the arrest document stated. “The red Buick appeared to have front-end damage and the right headlight was illuminated. A black male adult, later identified by his temporary Idaho driver’s license as Christopher Graham, was found in the driver’s seat slumped over and drooling from his mouth. The keys were in his lap and the vehicle was off with the headlights on.”

The document went on to state that a deputy opened the driver’s door and attempted to wake Graham at least three times.

“I could smell an odor of an unknown alcoholic beverage emanating from his person,” one deputy noted in the document. “Graham was asked to exit the vehicle when he began to passively resist. Graham was taken out of the vehicle and placed into restraints.”

The deputy also noted that he observed Graham to have bloodshot, watery eyes, while appearing to be confused as to his location, thinking he was being removed from his bedroom.

“While standing, Graham was unsteady and required assistance to keep him from falling,” the document stated. “Graham refused to perform the Nye County standard field sobriety tests. He was transported to the Nye County Detention Center where he refused to consent to any blood or breath testing.”

“Due to my training and experience, I believed Graham to be under the influence of alcohol,” the deputy noted in the document. “Graham was arrested at 10:32 a.m., and booked into the Nye County Detention Center on the pre-mentioned charges.”