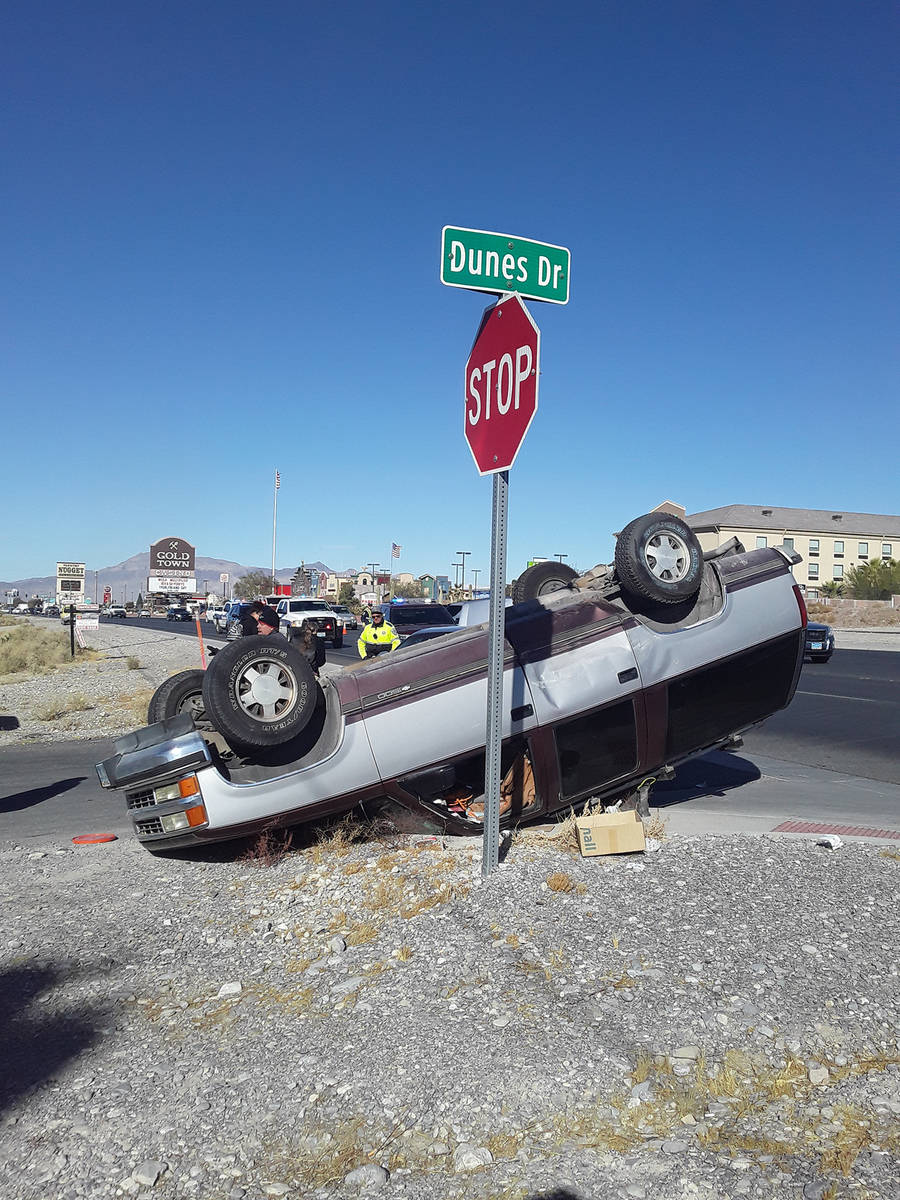 A Pahrump woman is dead and two children were seriously injured following a two-vehicle crash at the intersection of Vicki Ann Road and Cash Avenue on Sunday, Dec. 6 at approximately 3 p.m.

Pahrump Valley Fire and Rescue Services Chief Scott Lewis crews arrived to find a one-vehicle accident with the vehicle having impacted several stationary objects including a perimeter chain link fence, two mature conifer trees, and an accessory outbuilding where the vehicle came to rest on its roof.

“Just as the fire department was arriving, bystanders removed two children from the back of the car, however the driver was mechanically entrapped,” he said. “Crews commenced a rescue assignment by removing two doors on the vehicle. Once they entered the vehicle, they determined that the driver did not survive the injuries, therefore it was no longer a rescue assignment, but became a recovery assignment.”

Lewis also noted that the vehicle actually became airborne at the time of the crash.

During the mechanism, the vehicle had become airborne where the bottom side of the vehicle had struck the roof surface of an accessory outbuilding, putting it into a situation where it was actually rotating in the air,” he said. “The two children were transported to flight and flown to UMC Trauma where their injuries were addressed.”

On Saturday, Dec. 12, at approximately 2:43 p.m., crews were dispatched for a report of a serious motor vehicle crash in the area of Wheeler Pass, where a child sustained serious injuries.

“It was not immediately clear as to where upon Wheeler Pass this accident occurred,” Lewis said. “Crews were initially directed to the area of Basin Avenue, however they were redirected to the area just north of the Spring Mountain Motorsports Resort. Upon arrival, crews found the accident where they assessed the patient who met flight criteria. Mercy Air 24 was dispatched and landed on Highway 160, where patient care was exchanged and the patient was subsequently flown to UMC Trauma with serious extremity injuries.”

Later on Saturday, at 5:43 p.m., crews were dispatched to Highway 95 near mile marker 17 for a motor vehicle accident involving a pedestrian.

“While responding, crews were notified that it was a pedestrian struck by a semi-truck,” Lewis said. “Crews arrived on location where they were searching for the pedestrian that was struck. The patient was located underneath the truck, where he was quickly assessed and found that he had not survived the impact. Crews maintained the scene for the investigation and returned without incident.”

Also on Saturday at 5:49 p.m., fire crews were dispatched for a report of a brush fire in the area of Irene Street and Blagg Road.

“Upon arrival crews found a slow-moving grounds cover fire in windswept conditions,” Lewis said. “The fire quickly grew due to the northeast winds and was pushed further south on a 5-acre property. We requested additional resources for the assignment and we brought in additional Pahrump Valley Fire and Rescue resources to the scene.”

Lewis went on to say that crews worked the fire throughout the evening where they protected the exposure structures.

“The fire did not leave the immediate 5-acre area and it was extremely difficult to fight,” he said. “The combustible material consisted of equestrian organic waste that was trucked in from an off-site location and place to a depth of one and a half to two feet throughout the property, which added a significant and unusual fire load, and also caused a tremendous smoke condition which added to the scene hazards for the firefighters. Crews had the fire under control in the late hours, but maintained a presence on the scene throughout the night.”

On Monday, Dec. 14 at approximately 9:57 a.m., crews were dispatched for a report of a motor vehicle accident with the vehicle resting on its roof in the area of Highway 160 and Dunes Drive.

“Crews arrived to find a two-vehicle crash with mechanical entrapment in an overturned vehicle,” Lewis said. “Crews quickly completed the extrication and removed the patient who was transported to the local hospital.”

At 10:24 a.m., fire crews were dispatched for a report of a brush fire in the area of Irene Street and Blagg Road.

“We arrived to find a wind-driven fire involving the same materials that we had fought on Saturday evening,” Lewis said. “Rather than trying to use just hoses, we brought in heavy equipment from Public Works as well as equipment from the landowner. We dug up the bad organic material that was still burning and went down to the soil surface, which we could not do on Saturday because it was too dark and too smoky and we didn’t want to have any injuries resulting from the use of heavy equipment without a lot of scene lighting. We were able to do that in the daylight.”

On the same day at 4 p.m. fire crews were dispatched to the 3700 block of Blosser Ranch for a report of a structure fire.

“Crews arrived to find a working fire with the home fully-involved,” Lewis noted. “Fire was showing through the roof of a wood-framed structure. It was not immediately known as to the status of the occupants. With a rescue potential in mind, crews commenced a primary and secondary search. They found that this particular property also had a hidden basement. With the floor gone, crews had to exercise extreme caution. At one point we pulled them out due to safety considerations and completed the primary and secondary searches through openings and windows. We found that the structure was unoccupied. The fire is thought to be accidental in nature. Probably related to the improper use of a wood-burning stove.”

Later that evening, fire crews were dispatched to a structure fire at 7:20 p.m. along the 3100 block of West Ramona Street.

“Crews arrived on location to find fire showing from a one-story single-wide manufactured dwelling with an attached wood frame addition,” Lewis said. “Crews gained access to the property where they stretched hand lines. They forced entry and found a room and contents fire. The primary and secondary search revealed that there were no occupants. The fire was quickly controlled with no extension. The tenant did arrive at one point and stated that he had been completing some chores approximately 30 minutes before the fire was discovered. It appears to be accidental in nature.”

“Crews arrived to find a well advanced fire with multiple explosions occurring on the property,” Lewis said. “All occupants were accounted for, however, several pets remained in or about the structure. Crews rescued a dog and a cat and administered oxygen at the scene, however several other pets were lost in the fire. There were no occupant injuries or firefighter injuries. The fire was quickly controlled in approximately 30 minutes after arrival, however it required extensive overhaul, so crews remained on location for several hours. The investigation revealed that the cause of the fire was a probable electrical malfunction. Red Cross assistance was afforded to the residents.”