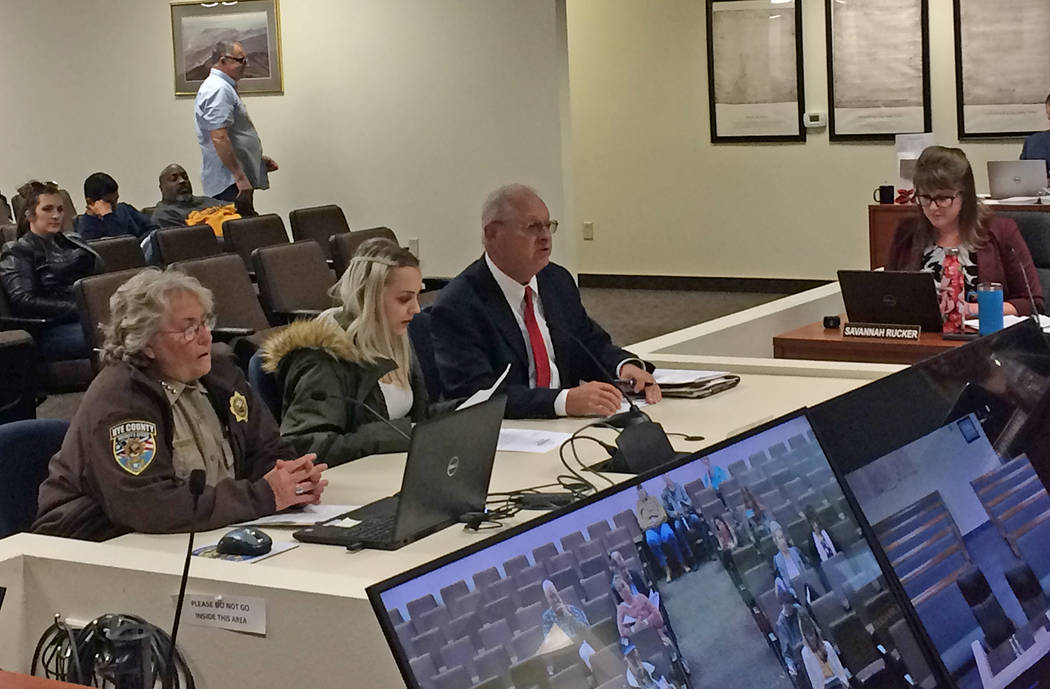 Robin Hebrock/Pahrump Valley Times From left to right, Nye County Sheriff Sharon Wehrly, courtesan Kourtney Chase and brothel industry supporter Chuck Muth, shown at the Dec. 17 Nye County Commission meeting. Chase urged the commission to remove the existing policy requiring medical testing for courtesans who leave their place of work for more than 24 hours, a request that met with favor by the commission.

Robin Hebrock/Pahrump Valley Times Nye County Code 9.20.150(F), which includes a requirement for courtesans to undergo medical testing whenever they are away from the brothel for more than 24 hours, will be deleted in its entirety as of January 6. 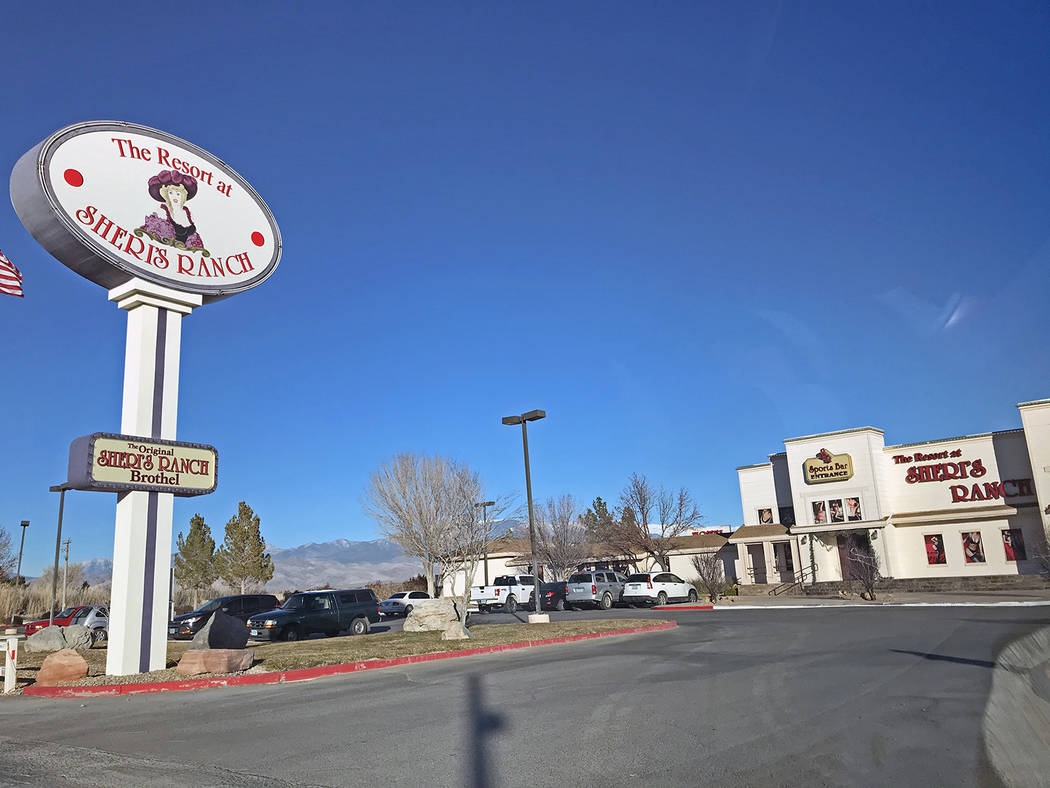 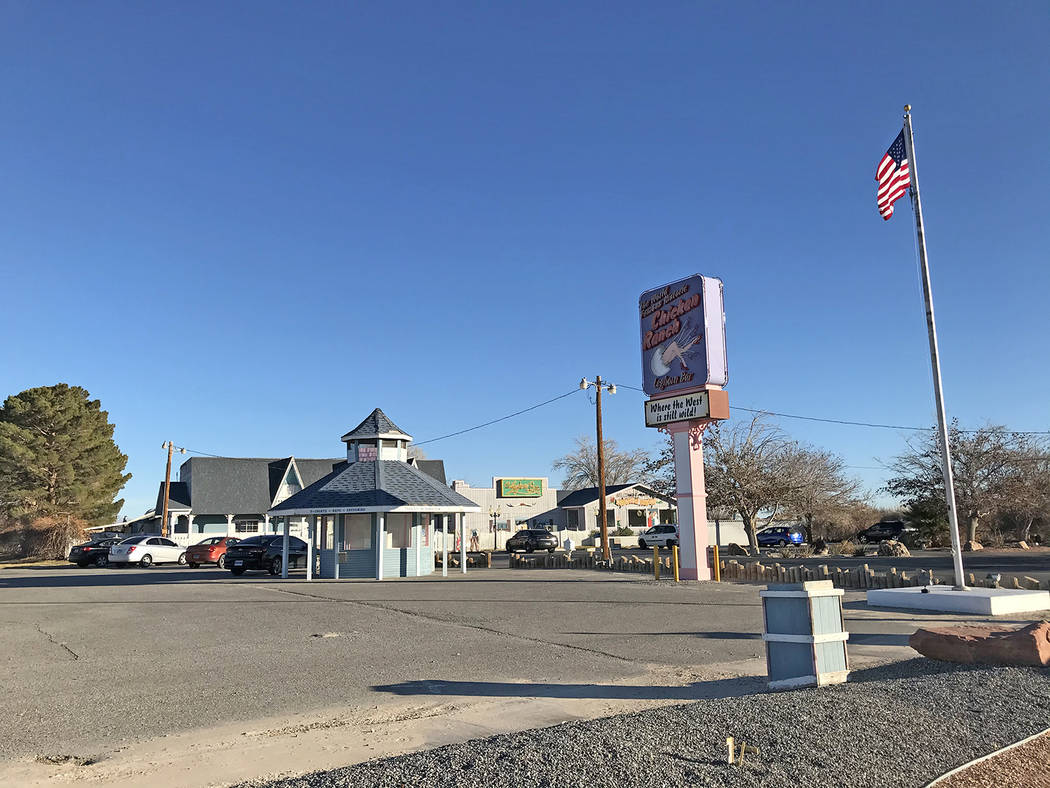 Robin Hebrock/Pahrump Valley Times The Chicken Ranch brothel, as seen in this Dec. 31, 2019 photo, is located in Pahrump.

When the initial draft of the most recent changes to Nye County Code Title 9 was proposed late last year, the inclusion of an expanded “lock-down” rule for the courtesans elicited instant indignation among those who work in and support the brothel industry.

Sex workers and brothel advocates took a firm public stance against what they felt to be overly-restrictive limitations of the courtesans’ personal time, and in response, Nye County decided to scrap the proposed expanded “lock-down” policy which called for the sex workers to be allowed off brothel premise for just six hours every 10-day period.

Going even further, the Nye County Commission has now officially removed all references to restrictions of the courtesans’ ability to leave brothel property, voting to delete the existing section that calls for medical testing any time a courtesan is away from the brothel for more than 24 hours.

The brothel code amendments went before the the Nye County Commission at its Dec. 17 meeting, where several representatives of the brothel industry were present.

Courtesan Kourtney Chase started off by detailing that she works at the Chicken Ranch. She focused her comments on the existing portion of the code calling for medical testing whenever a courtesan leaves the brothel for more than 24 hours.

“I had no involvement in the brothel industry until three years ago,” Muth explained for the commission. “And one thing I have gotten to know, from their standpoint, is, the terrible stigma that goes with this legal business in Nevada and I just want to commend this commission for the language changes you have in this proposal, referring to these professional women as courtesans and as brothels rather than houses of prostitution. I don’t know that you really fully appreciate how much that means to the women in this industry so I want to thank you.”

Kacey Ligon, a former courtesan, spoke next, pointing out that lock-down prevents sex workers from being able to spend their earnings in the local community, because most of the women fly into Nevada in order to work at the brothels and when they leave, they take all their income with them.

“Just as a practical sense, let these girls out. Let them spend their money here, let them have a little bit of freedom to feel like a normal human being,” Ligon said, adding, “I can tell you the very last thing I ever wanted to do after leaving (work at a brothel) was going to find somebody to pick up. It’s ridiculous, it’s a ridiculous argument.”

Following public comment, Nye County Commissioner Lorinda Wichman offered some background on the lock-down issue, explaining that the intent was never to prevent courtesans from having the freedom to conduct personal errands. Rather, the intent was to prevent “out-dating” or situations in which brothels send the courtesans off the premises to meet a client. “People were getting hurt,” Wichman said, noting that the policy was meant to protect the courtesans.

Nye County Commissioner John Koenig then launched into a list of suggestions he had for the draft as proposed, including changes to section 9.20.150(F) which addresses the lock-down rule. Making his alterations simple, Koenig asked for that section to be removed in its entirety.

Nye County Commissioner Leo Blundo offered some changes to the draft as proposed too, starting off by scrubbing the requirement that key employees possess the same qualifications as the individual licensee. “I don’t need a key employee doing a full financial background check, so they don’t technically possess the same qualifications. So I’d like to delete that,” Blundo said.

Koenig replied that he had looked at that section as well but he felt that due to the fact that many brothel operations are conducted almost wholly by a key employee, he would prefer the key employee have the same qualifications as the licensee.

Blundo did not waver, however, and in the end Koenig said he was not going to argue the point further, so that change was incorporated.

Nye County Commissioner Donna Cox then jumped in to make her own changes, including the removal of the requirement that licensees must divulge all prior arrests along with convictions when applying for a license.

Nye County Sheriff Sharon Wehrly said all arrest records come up during a background check anyway and the code requirement was a way for her to gauge if an applicant was being honest, so she would like that section to remain the same.

Blundo threw his weight behind Cox, agreeing that removing the arrests requirement would streamline the process for applicants. As such, that change was also incorporated.

Various other amendments to the proposed draft were put forward as well and the motion to approve the code changes, including the alterations suggested by Koenig, Blundo and Cox, passed with all in favor. The changes take effect Monday, January 6.