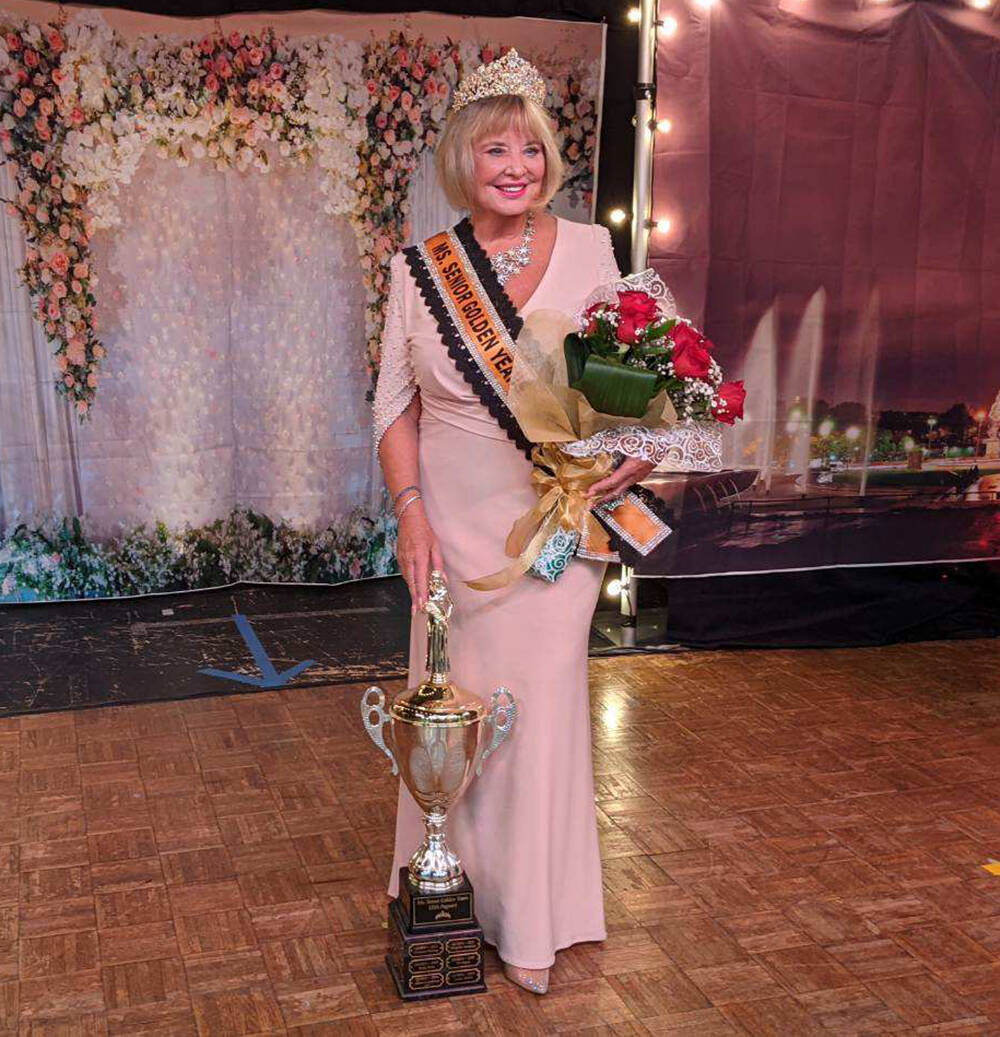 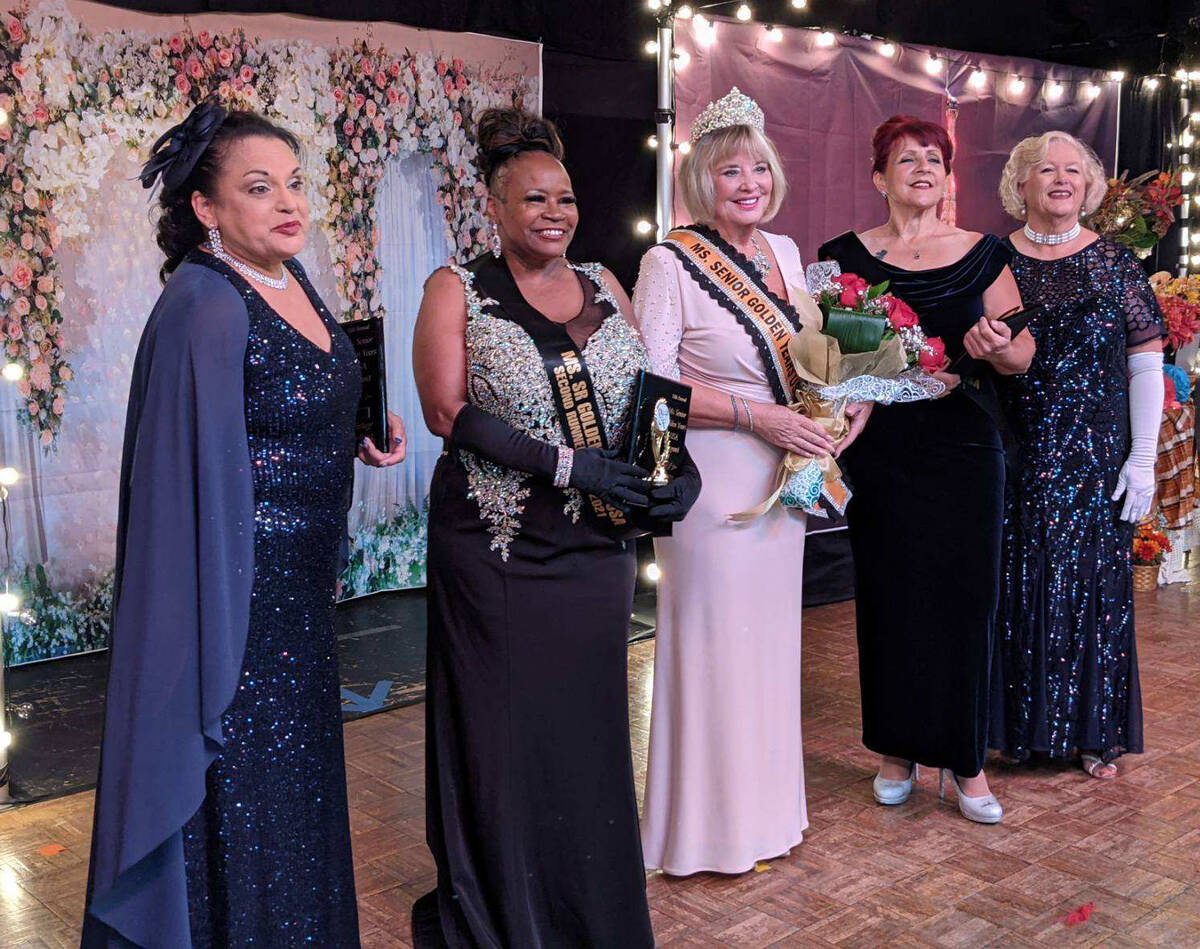 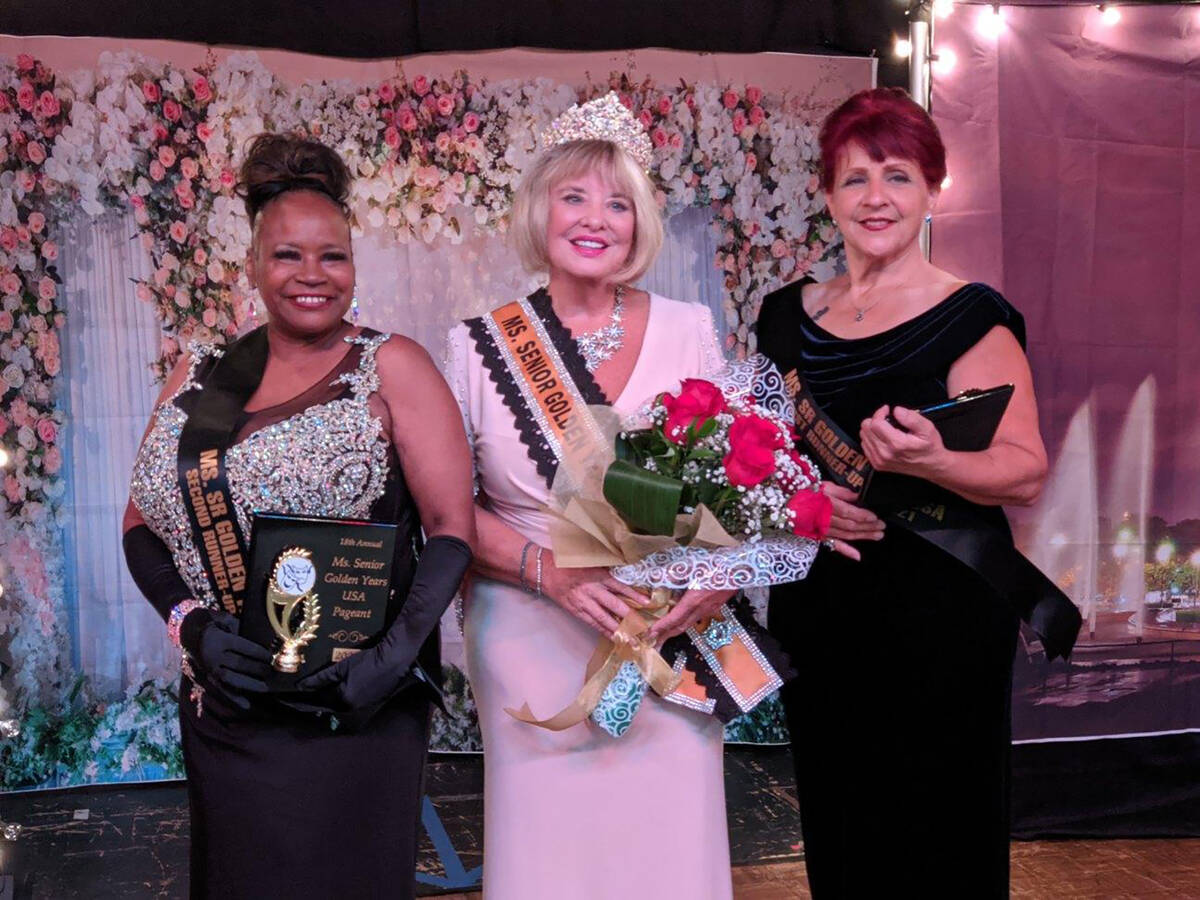 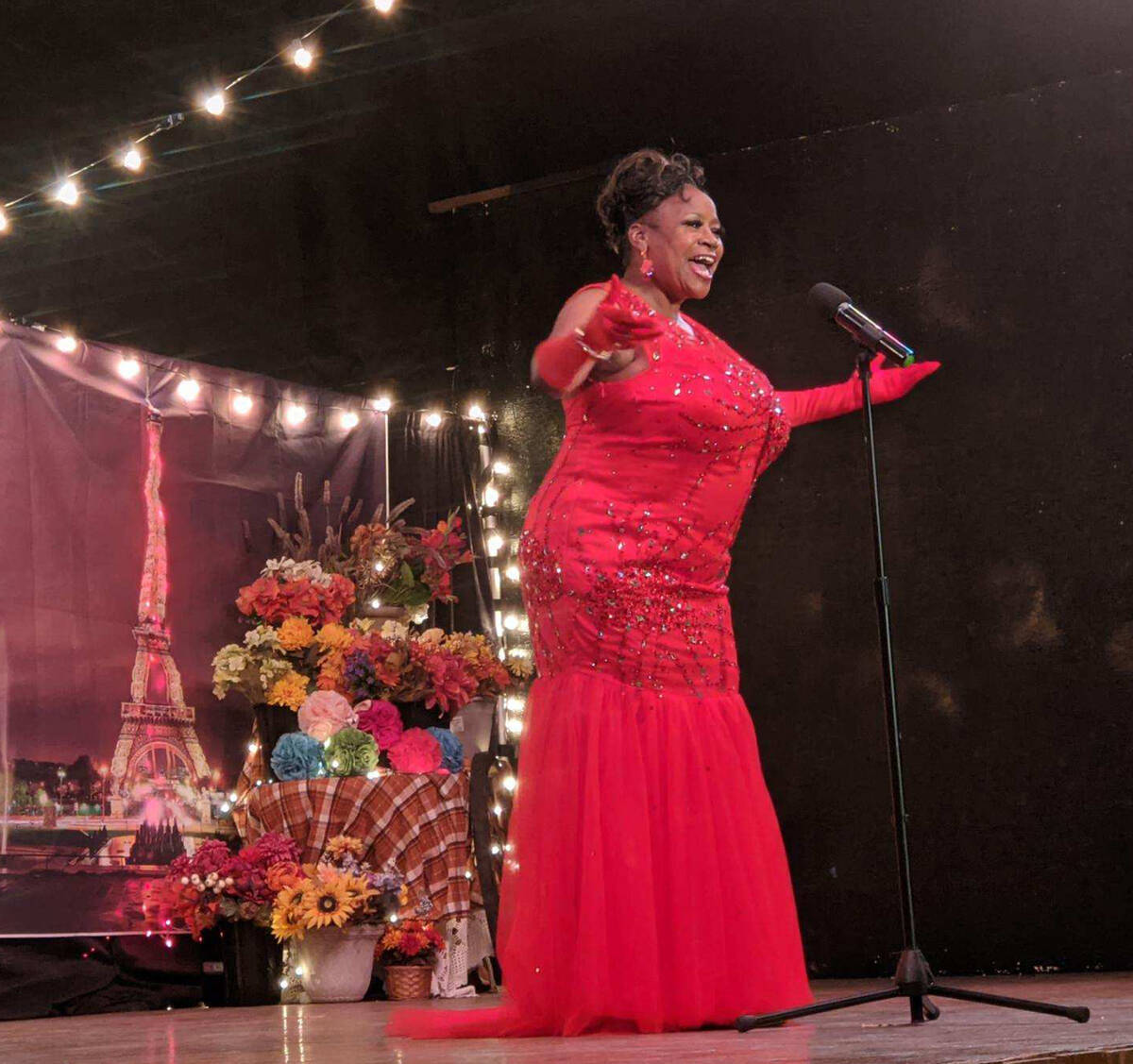 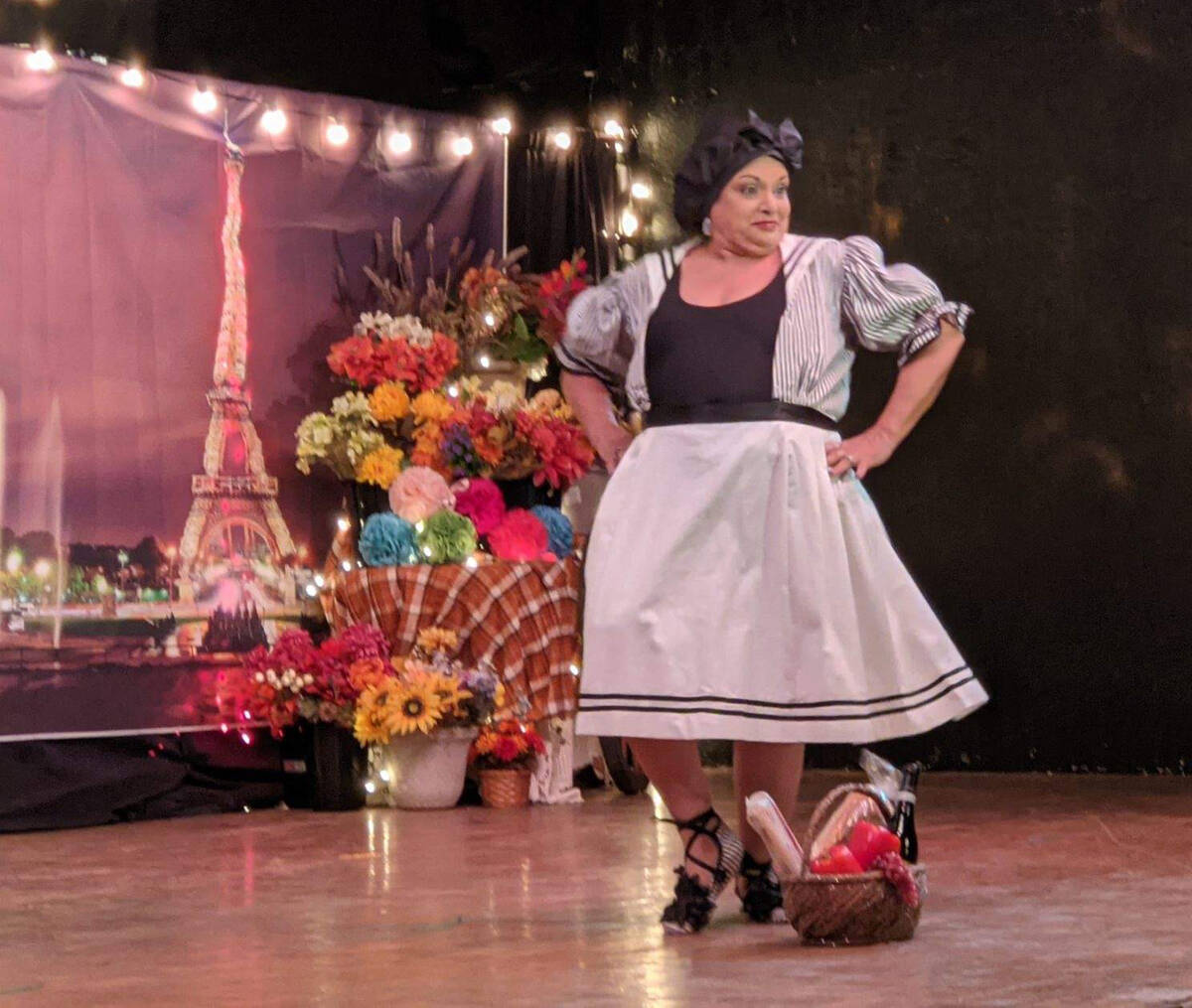 Mark Moore/Special to the Pahrump Valley Times Laura Horn was deemed the best in the vintage bathing suit competition, taking home a first place award for that category. 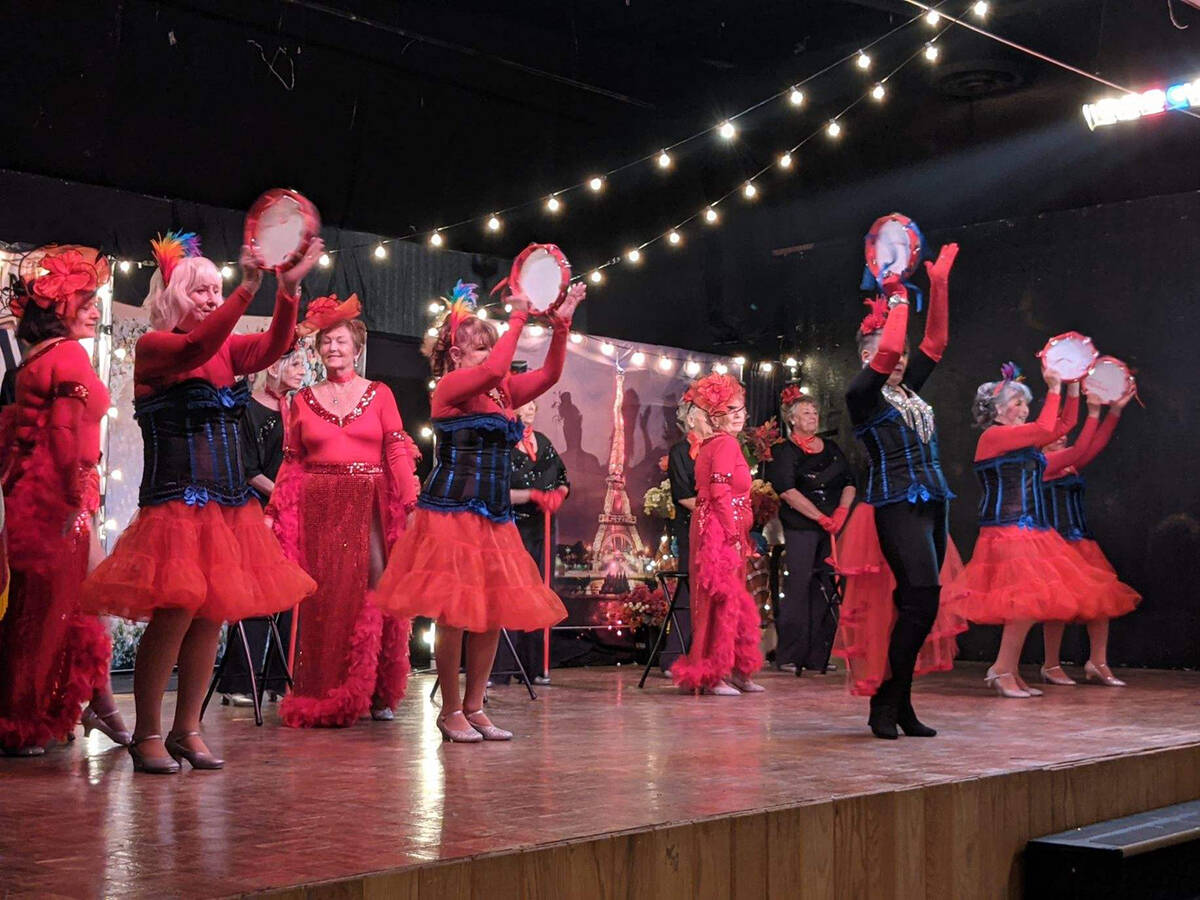 Mark Moore/Special to the Pahrump Valley Times The Nevada Silver Tappers are seen entertaining the crowd at the Ms. Senior Golden Years Pageant. 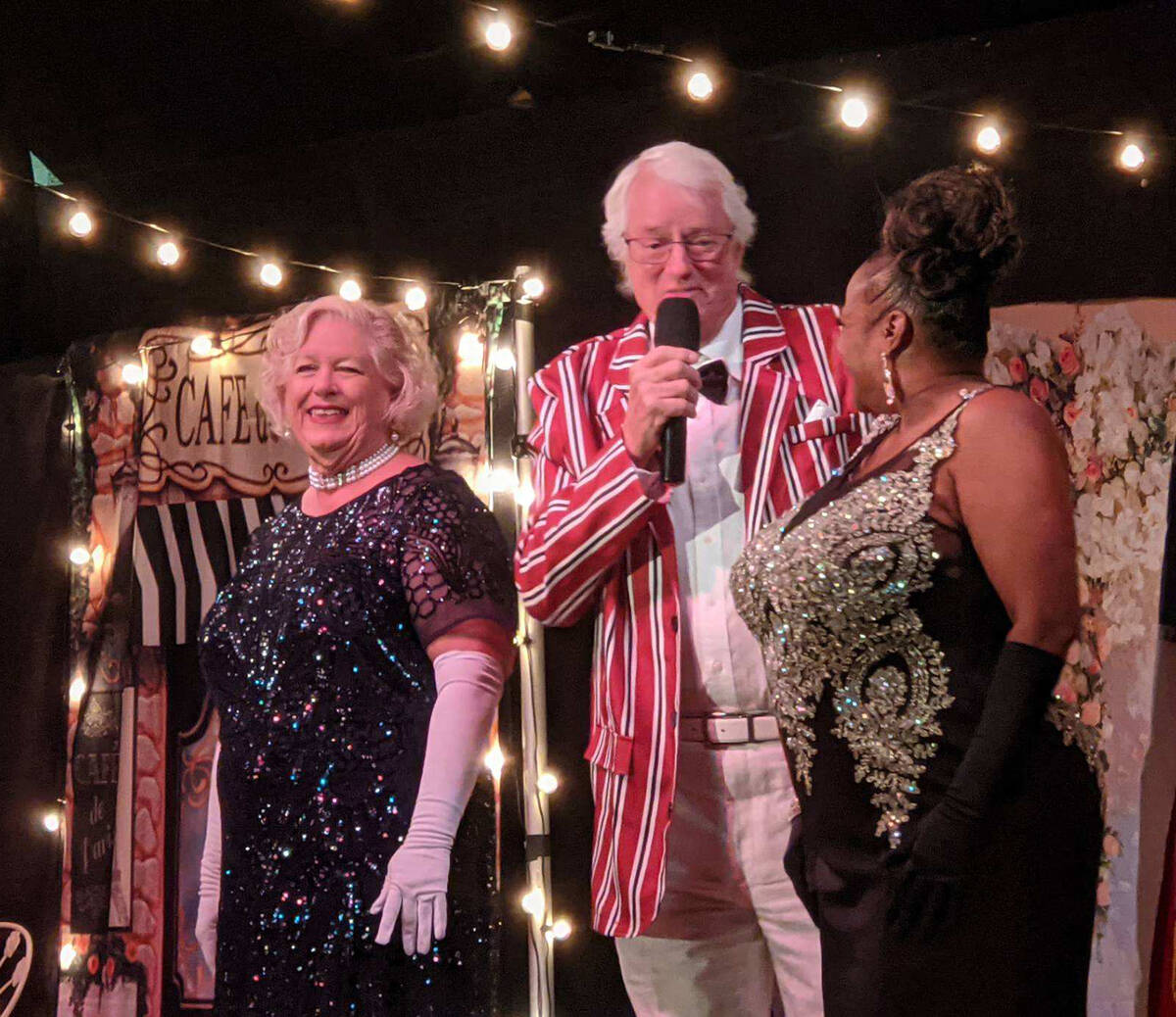 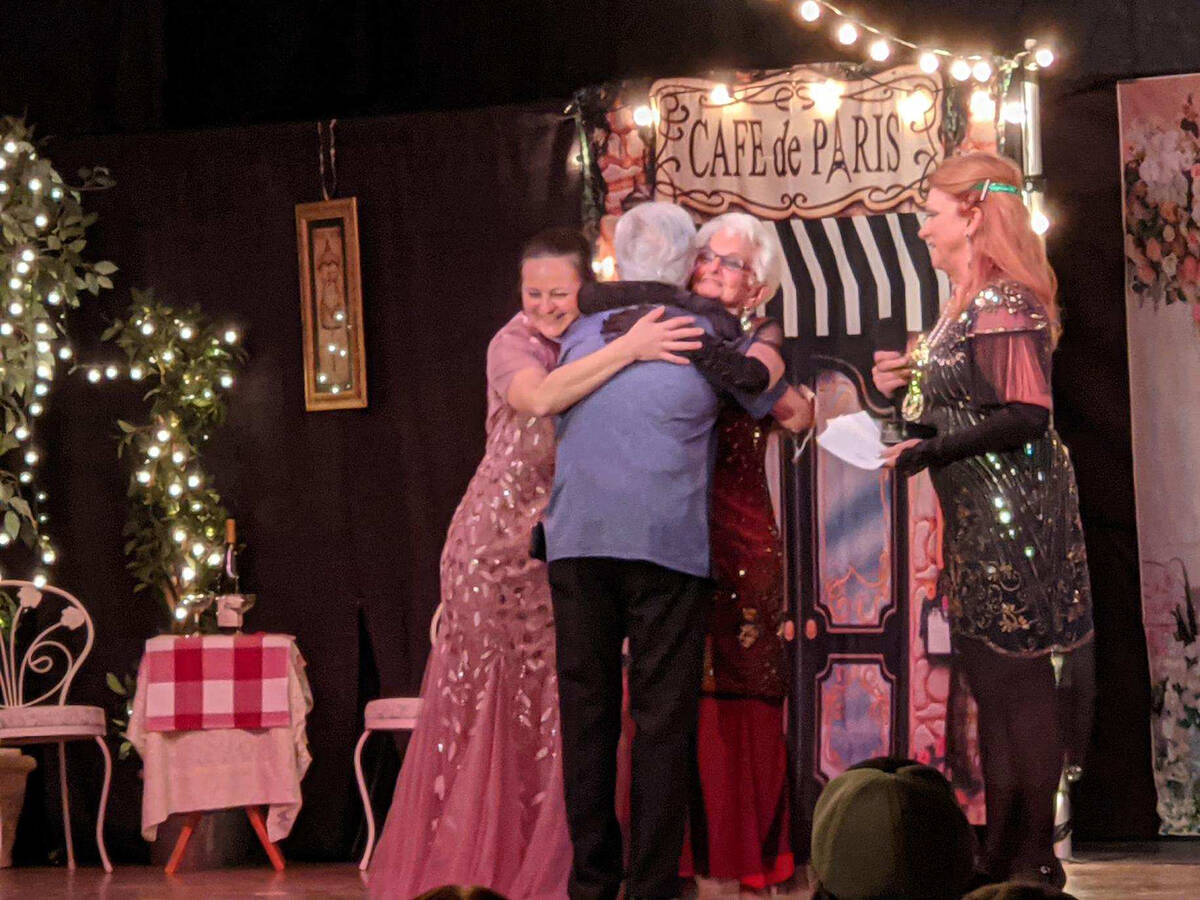 Mark Moore/Special to the Pahrump Valley Times Sally LaRocca Award winner Steve Elliott is pictured being hugged by his mother, pageant founder B.J. Hetrick-Irwin, and his daughter Stephani Elliott, who took on the role of master of ceremonies at the 2021 pageant. 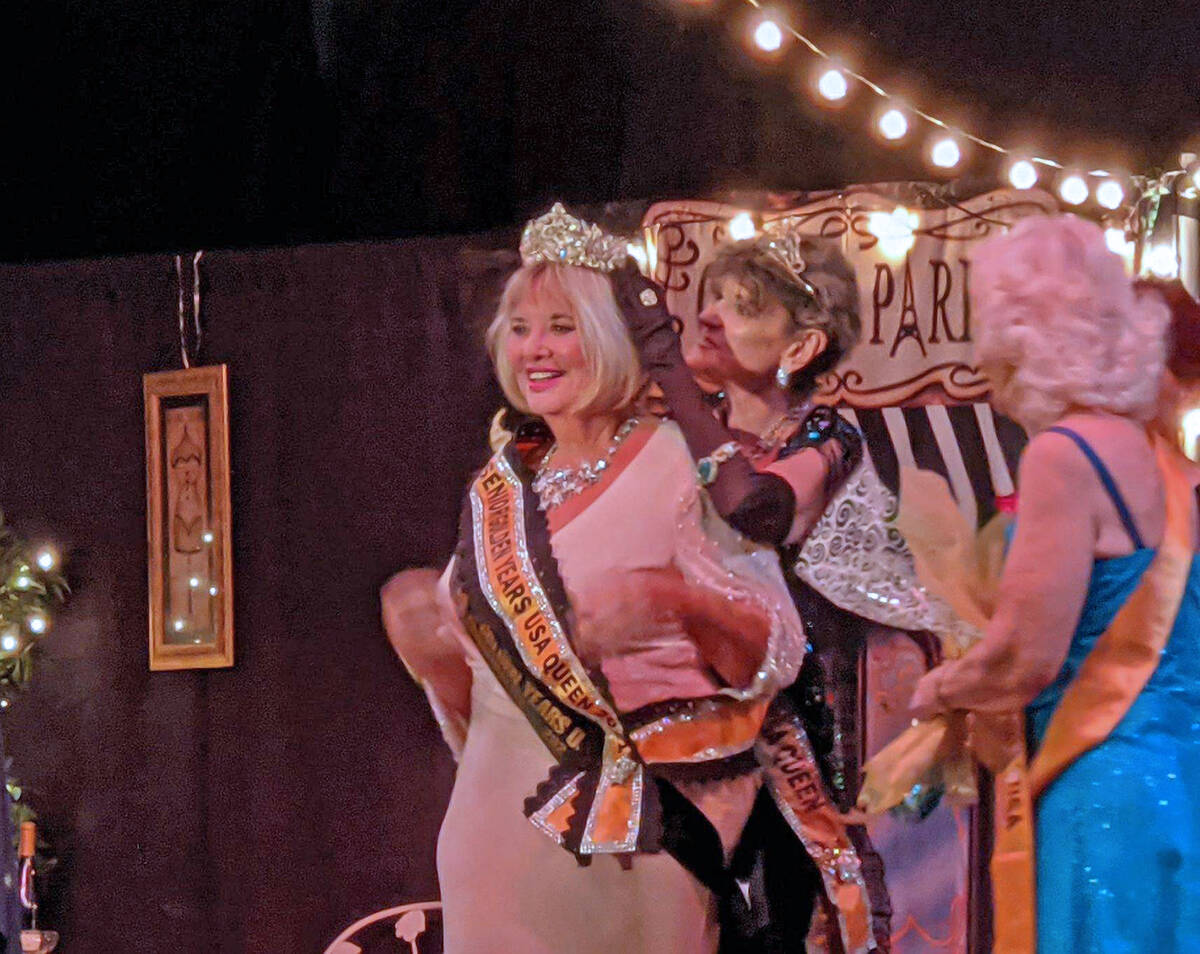 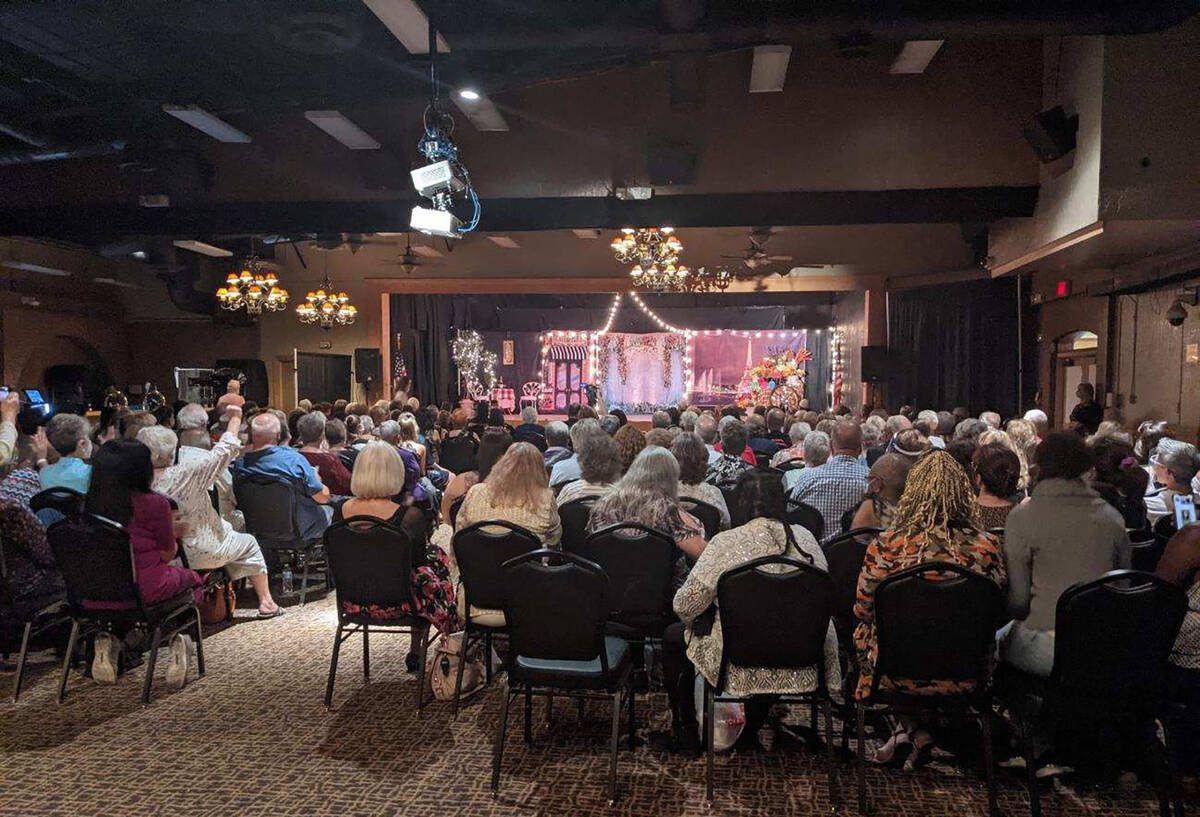 Mark Moore/Special to the Pahrump Valley Times The 2021 Ms. Senior Golden Years Pageant was well attended with roughly 200 people in the audience on Saturday, Sept. 18.

Hosted this past Saturday, Sept. 18 at the Saddle West Hotel and Casino Showroom, the Ms. Senior Golden Years Pageant, this year with Paris as a theme, was a rousing success.

It was an event that the organization waited many long months to hold, with the COVID-19 pandemic forcing the cancellation of the 2020 pageant not once but multiple times. However, the contestants who signed on in early 2020 did not simply give up when facing the reality of having to postpone the show.

Instead, they rallied together to stick it out and their patience and perseverance paid off when they were finally able to have their moment in the spotlight.

The pageant was originally slated to include the “Sassy Six” as they had been dubbed, but due to an unfortunate medical issue, contestant number three, Val Hallam, was unable to participate. Therefore, the remaining five fabulous ladies took to the stage last Saturday night to show off their elegance and grace for a panel of admiring judges and a packed audience filled with family, friends and supporters.

While the crowning of the Ms. Senior Golden Years Queen was perhaps the most anticipated moment of the night, there was plenty of additional excitement and entertainment for audience members to enjoy that evening.

With hundreds in the crowd to cheer them on, the pageant opened with a French-themed number entitled “Thank Heaven for Little Girls” and moved almost seamlessly into a variety of other performances from volunteer entertainers. These included Pahrump’s own justice of the Peace Lisa Chamlee and her son Alexander Morrisey, regular pageant performer Bill Watson and members of the Golden Years’ sister organization, the Nevada Silver Tappers, who closed out the entertainment portion of the event with “Folies Bergere, which pageant master of ceremonies Stephani Elliott told the Pahrump Valley Times had brought down the house and prompted a spontaneous standing ovation. Past Ms. Senior Golden Years queens and contestants brought their flair and talent to the stage as well, including 2019 queen Laraine Babbitt, 2017 queen Mary Ellen Swarowski and 2018 second runner-up Mary McRory.

The true stars of the night, however, were the contestants themselves and they had plenty of opportunity to shine as they took part in each of the pageant categories with titles up for grabs that night.

The competition was comprised of four specific areas for judging, including stage presence, vintage bathing suit and talent, along with interview/platform, which was conducted privately with the judges. The Ms. Congeniality title was also set to be bestowed and this is a very special award as the winner is determined by the contestants themselves. Topping it all off, of course, were the title of second runner-up, first runner-up and queen.

Judging the competition this year were Phyllis Truman, who comes with a deep background in dance and entertainment, well-known television personality Nate Tannenbaum and Mary Mancini, who has experience with producing pageants herself, having worked on the Ms. Senior Nevada pageants from 2007 until 2020. All three were warmly greeted by the crowd and their ability to discern between the amazing performances of the contestants, which is no easy feat, was greatly appreciated that night.

Once all was said and done, Quercia was not only crowned as 2021 Ms. Senior Golden Years queen, she also took home the awards for Ms. Congeniality and stage presence. Bolton, who was named as second runner-up, had absolutely wowed the judges with her singing, which garnered her the award for talent as well.

First runner-up was Fisher, and she too scored more than one award, earning the title for interview/platform as well. The award for the best performance in the vintage bathing suit competition went to Horn.

There was one more special award handed out that evening but it was not destined for one of the contestants. Each year, pageant founder B.J. Hetrick-Irwin presents the Sally LaRocca Courage Award, which goes to one person who has shown unwavering dedication to and support for the Ms. Senior Golden Years organization. This year was particularly poignant for Hetrick-Irwin as she presented the award to her own son, Steve Elliott, with tears of happiness blurring her vision as she enveloped him in a tight hug after he made his way onto the stage.

Ms. Senior Golden Years is an organization dedicated to bringing together women who are 60 years of age or better to give them a positive endeavor to focus on in their later years. Anyone interested in joining next year’s pageant is encouraged to reach out to Hetrick-Irwin at 775-727-7011.