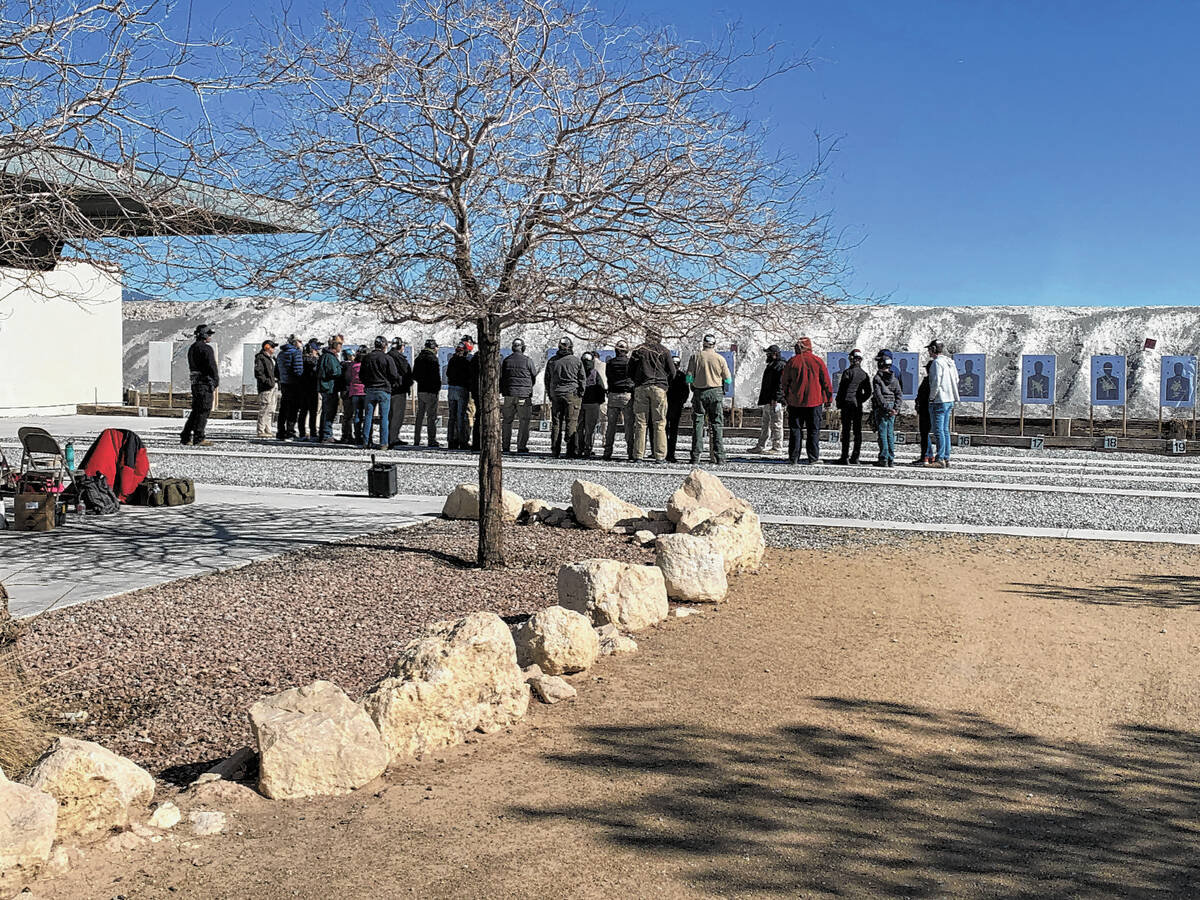 Brent Schanding/Pahrump Valley Times Students participate in firearms training Tuesday, Jan. 25 at Front Sight Firearms Training Institute. The owner of the mega-firearms facility near Pahrump says he is restructuring following a lawsuit that’s left the business financially strapped. It comes amid a multi-million dollar expansion of the 550-acre facility that was set to include a hotel, food court, retail shops and more. 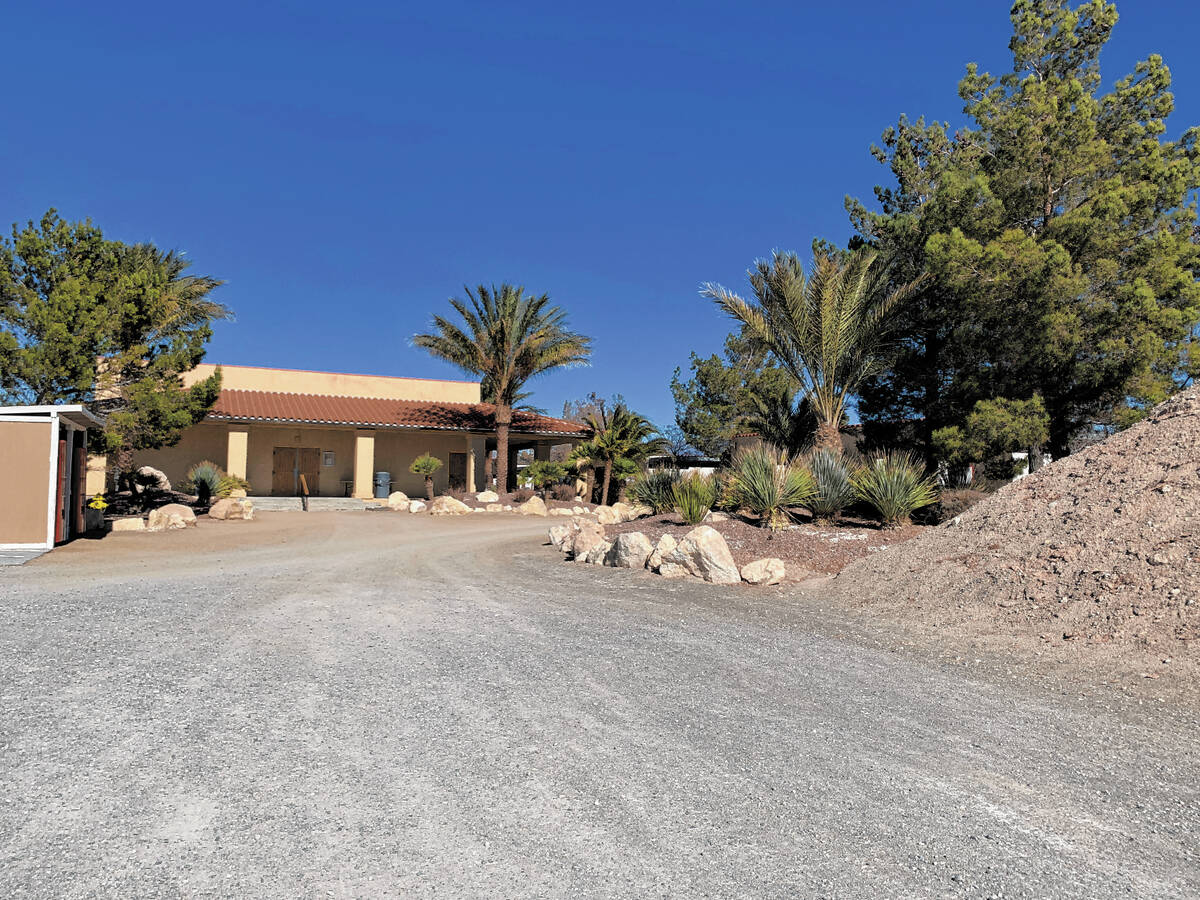 Brent Schanding/Pahrump Valley Times In a 15-page letter to its members, Front Sight Firearms Training Institute owner Ignatius Piazza claims a “con man” defrauded the company and is attempting to acquire the shooting range and academy, which boasts more than 250,000 members at several facilities across the U.S. The business is purported to be the largest of its kind in the world.

The owner of a mega-firearms training center near Pahrump says he is restructuring following a lawsuit that’s left the business financially strapped amid a multi-million dollar expansion of the 550-acre facility that was set to include a hotel, food court, retail shops and more.

In a 15-page letter to its members on Saturday, Front Sight Firearms Training Institute owner Ignatius Piazza claimed a “con man” defrauded the company and is attempting to acquire the shooting range and academy, which boasts more than 250,000 members at several facilities across the U.S., and is purported to be the largest of its kind in the world.

“He represented that he was one of us, a pro-gun patriot who wanted to assist Front Sight in positively changing the image of gun ownership in our lifetimes by helping us complete the resort with low-interest money he would source from his vast pool of overseas investors,” Piazza said. “He promised he would raise all the funds needed to complete the resort and do it quickly if we covered all the administrative costs and some initial marketing costs.

But members of the institute are balking at the owner’s restructuring plans and calling “foul” after Front Sight on Saturday announced sweeping and immediate changes to many of its policies and fees.

One Front Sight member told the Pahrump Valley Times that Piazza issued a letter to her about its new “use-or-lose” policy that would essentially divert account assets that she had paid upfront to help save the business from foreclosure.

“Many feel there is breach of contract with their memberships,” said Karen Zahn-Anderson, who told the Pahrump Valley Times that a Facebook group had been formed this weekend to protest changes at the mega range.

Those changes include a new $50 monthly maintenance fee and an additional $25 daily “staff support fee” introduced for all students and members who attend a course at the facility. Front Sight announced on Saturday it would also immediately suspend many of its longtime membership programs that offered discounts and perks to loyal customers.

David Morse, of Wyoming, who has been a member at the Pahrump range since 2009, said the news from Piazza came as a “sucker-punch.”

“You can never trust that man again,” he said. “This is fraud. This is extortion.”

Morse and others are urging the attorney general to review the case. It’s unclear if any action will be taken.

In his letter to members, Piazza said the new fees and changes are needed because members of the range collectively failed to donate enough to fight against the company’s costly legal challenges. Piazza urged members to donate in a last-ditch effort to save the range, located about 30 minutes south of Pahrump.

“Regardless of whether you think the changes Front Sight has made are needed and welcomed or not, this could have all been avoided, had all the members participated to a level as low as $50,” Piazza said. “As a result, the proper and smart legal action to protect Front Sight for generations to come, is what I have done, namely restructure Front Sight’s policies, procedures, benefits, services and fees.”

In August 2018, Piazza said he filed a lawsuit against the man who had been enlisted to raise funds for a multi-million dollar expansion of the Front Sight resort near Pahrump.

Plans called for 1-acre homesites to be added to the sprawling gun range, alongside RV sites, condos, a hotel, retail shops and restaurants. But instead of raising money, Piazza alleges the man diverted construction funds for personal use, which led to financial problems for his business.

“Unfortunately, our motions for summary judgement and motions for partial summary judgement, have never produced the desired result of a case-winning decision in our favor with the judge in this case,” Piazza said. “This was a conspiracy from the start to steal Front Sight.”

Piazza did not name the man involved in the lawsuit.

Front Sight Firearms Training Institute was founded in 1996 by Piazza at leased facilities near Bakersfield, Calif.

The California chiropractor expanded the business by opening a new massive training center straddling the Clark County and Nye County line about 20 years ago to provide gun safety training and self-defense courses. The facility houses multiple shooting ranges and claims to be the largest gun-training organization in the U.S. The facility also lobbies against gun-control measures.

While the gun resort’s master plan was built on the premise that “24-hour access to shooting ranges will attract law-abiding citizens and even the rich and famous to a gun lover’s oasis in the desert,” the future of the $40 million desert community may be more of a mirage.

But Piazza told members he wasn’t giving up on the dream.

“I care about each and every staff member and their families who count on the employment that Front Sight provides them,” he said. “I care about the town of Pahrump and the millions of dollars in revenue the 30,000 to 50,000 students who attend our courses each year bring to Nye County, Nevada.”

A copy of Piazza’s letters can be found at www.frontsight.com/Restructure.