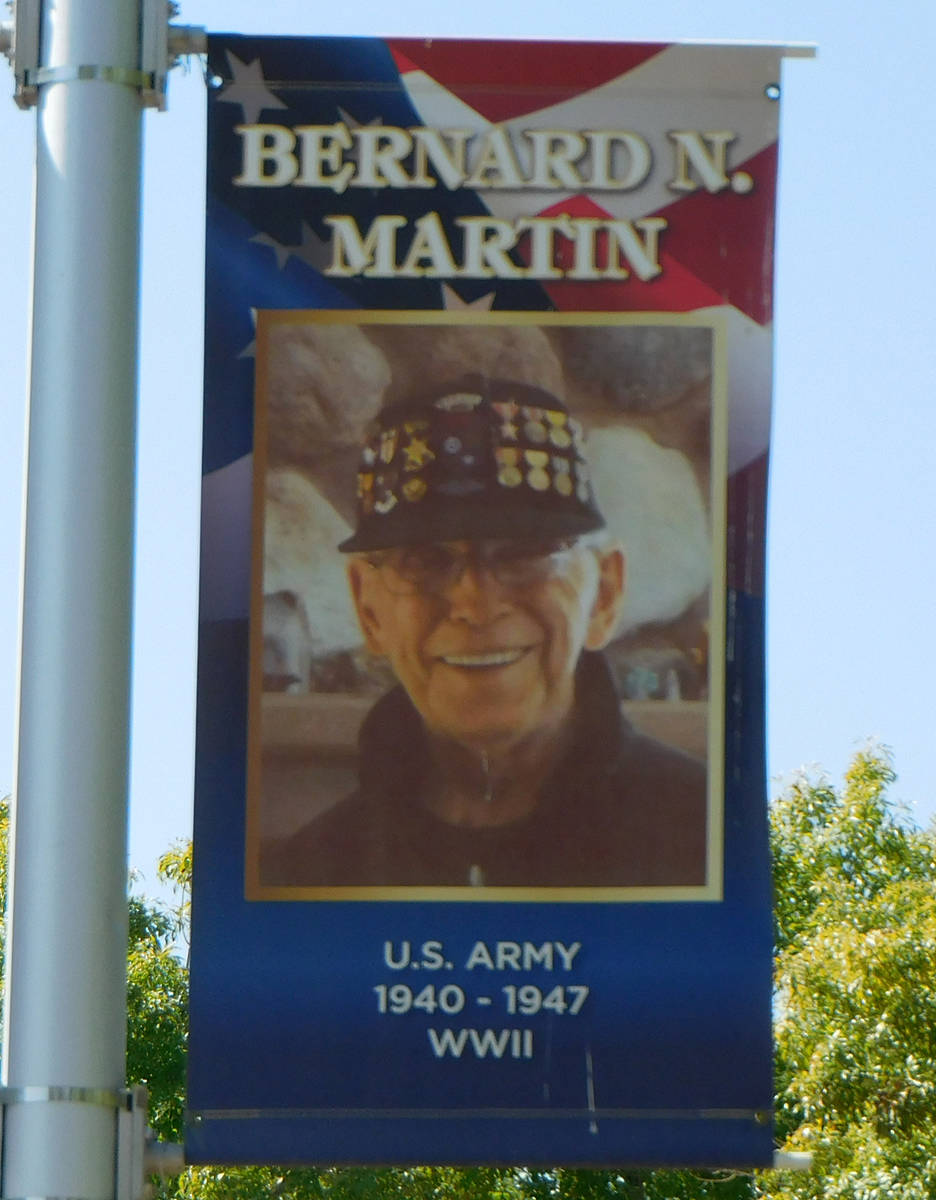 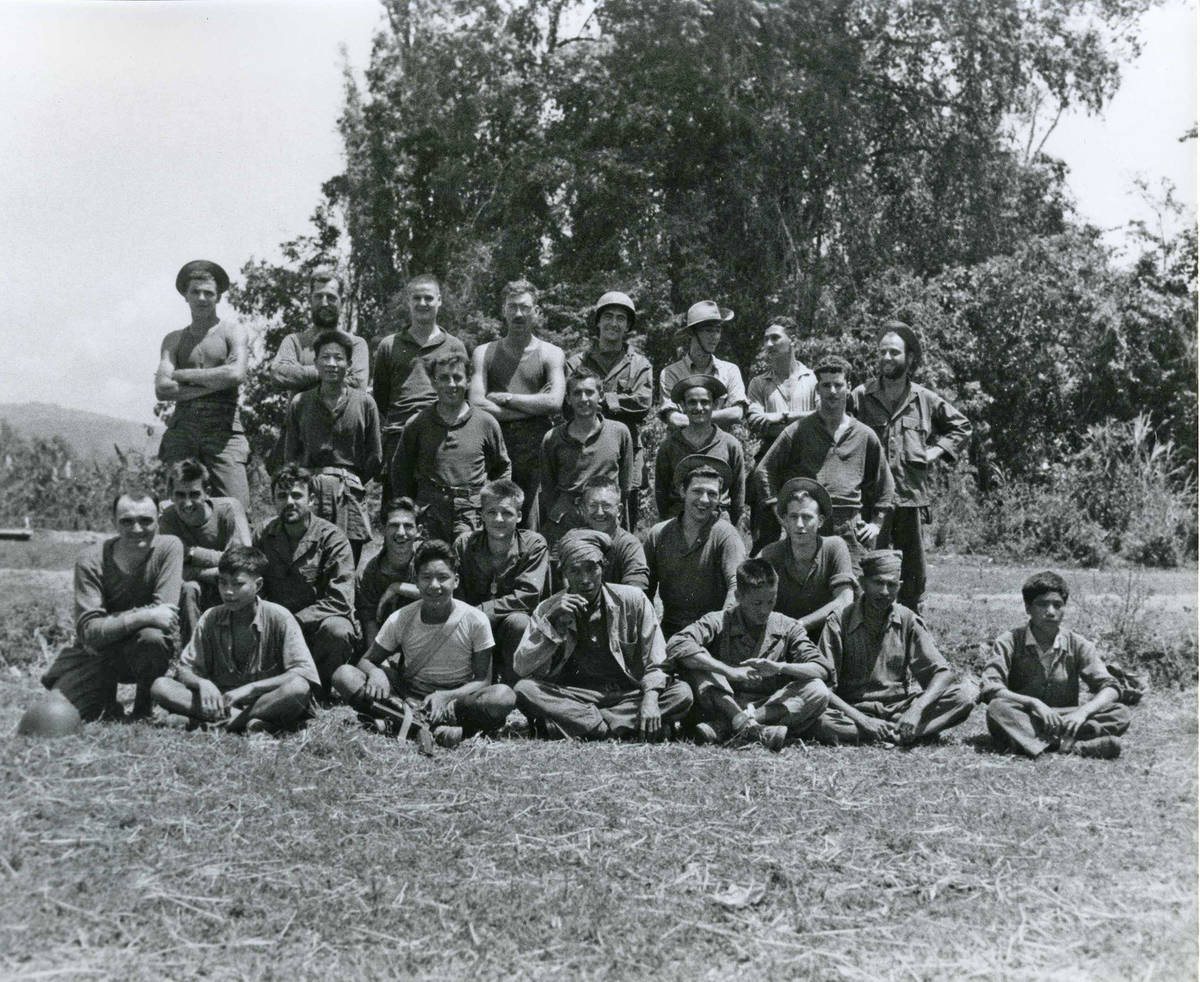 Special to the Pahrump Valley Times Members of the 5307th Composite Unit, Merrill’s Marauders and local Kachin tribal villagers pose for a group portrait during World War II. Bernard “Marty” Martin is pictured in the second row, second from the right. 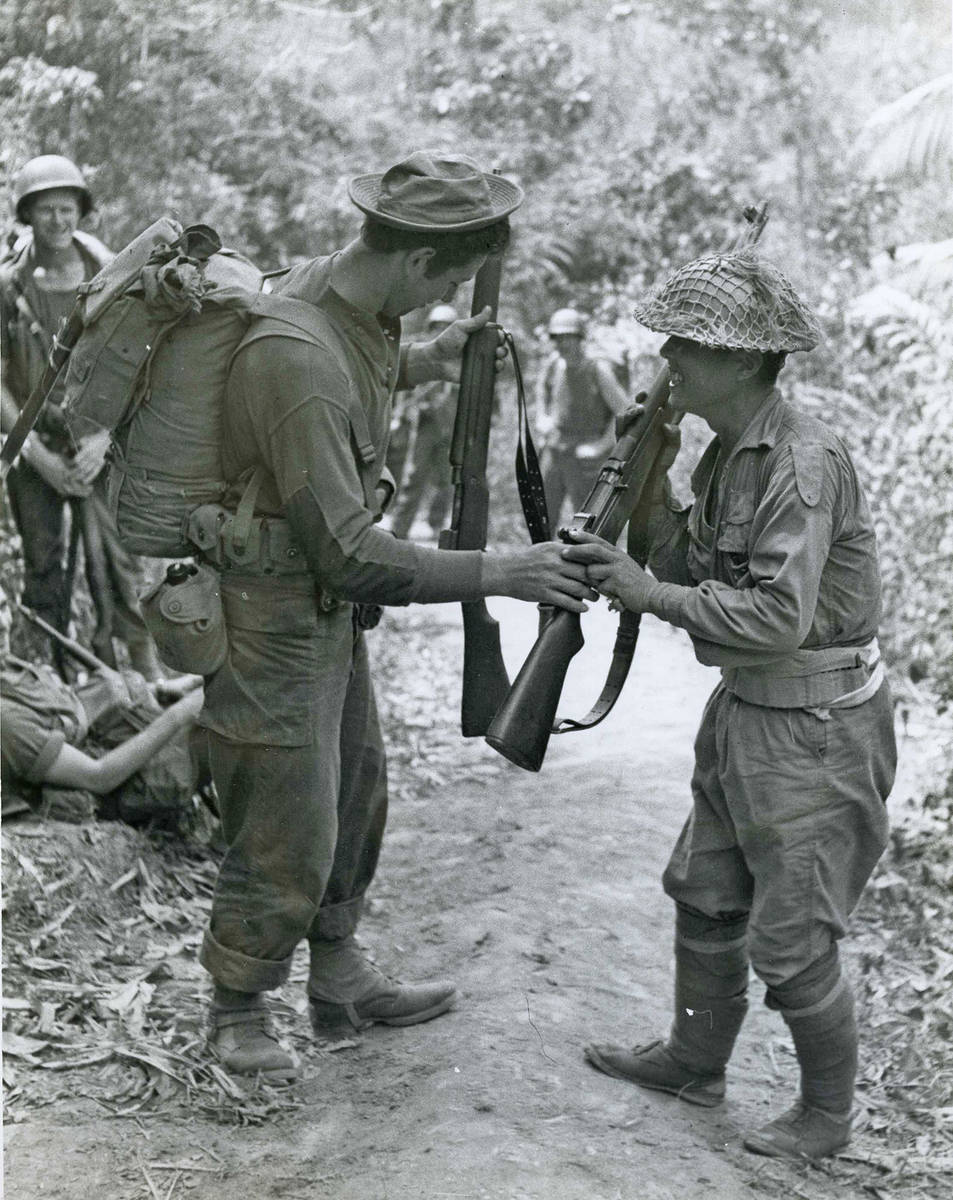 Special to the Pahrump Valley Times Bernard “Marty” Martin, at left, compares rifles with a Chinese soldier in northern Burma in this World War II photo.

What would you do if faced with a call to volunteer for a “dangerous and hazardous” mission?

In 1943 in the depths of World War II, for thousands of brave American soldiers there was only one response to give ­— they answered the call.

The men who stepped up and volunteered for that mission became members of the 5307th Composite Unit (Provisional), which later became known as Merrill’s Marauders, after its leader, Brigadier General Frank Merrill. With the aid of nothing more than pack mules and what they could carry with their own two feet, the severely outnumbered but ever-determined Merrill’s Marauders made their way over hundreds of miles through the dense jungles of Burma to harry and ultimately defeat Japanese forces, capturing Myitkyina Airfield in 1944.

These accomplishments earned the unit immediate recognition. In July 1944, Merrill’s Marauders were awarded the Distinguished Unit Citation, which was redesigned as the Presidential Unit Citation in 1966. In addition, Merrill’s Marauders also has the rare distinction of a Bronze Star being awarded to every single member of the unit. And now, following several years of effort by members of and descendants of members of the unit, another well-deserved honor is being bestowed on Merrill’s Marauders, which is to be awarded its very own Congressional Gold Medal.

Less than a month later, that legislation was signed into law, with President Donald Trump making the Merrill’s Marauders Congressional Gold Medal Act official on Oct. 17.

The town of Pahrump has its own direct connection to Merrill’s Marauders through Bernard N. Martin, who was an Army veteran and a Pahrump resident until his passing on July 31, 2015.

Martin, better known as “Marty” to his friends and family, served with Merrill’s Marauders during World War II and was later a member of both the Veterans of Foreign Wars and the Disabled American Veterans in Pahrump. His service to the country is visually commemorated as part of the Nye County Veterans Banner Program, with a banner featuring his image and name placed on Calvada Boulevard, alongside dozens of other banners honoring the men and women of Nye County who have served.

Martin’s wife Beverly still resides in Pahrump today and she told the Pahrump Valley Times that he would have been overjoyed at the news of the passage of the Merrill’s Marauders Congressional Gold Medal Act.

“I have to tell you, Marty was humbled that such an honor would be bestowed on these men. He wept unashamedly,” Beverly said, remarking that she and Marty had been made aware of the effort to obtain a Congressional Gold Medal for the unit before he passed.

“There were quite a few Marauders still with us (at that time), and as each year passed with the number dwindling, I became filled with hope this would happen while my man, as well as others, could experience this honor in person. Sadly that did not happen,” Beverly explained. “However, there remain a few, that I pray and want with all my heart to be able to have that experience I so much wanted for them all. History has not been kind to these men of courage and determination and yet, no group of men more richly deserve it! I frequently visit Marty’s banner, which has been such a blessing for our family. I shared 53 years-plus as his wife and was so blessed to have been loved by such a man.”

According to a news release from Melillo Clasen, there are only nine Merrill’s Marauders still alive today and despite their advanced age, two of them have been absolutely instrumental in the effort to obtain this special recognition for the courageous acts of the 5307th Composite Unit (Provisional).

“A special ‘thank you’ to Merrill’s Marauders Bob Passanisi, 96, from New York and Gilbert Howland, 97, from New Jersey, who have represented the 5307th Composite Unit Provisional – Merrill’s Marauders – in Congress during the past two years of this 116th Congressional Session,” Melillo Clasen wrote when announcing the signing of the legislation.

“They have made three trips to Washington, D.C. during the past two years, the most recent in February, 2020 before COVID-19 paralyzed the world,” she detailed. “Despite pushing 100, the two veterans walked the halls of Congress more than three miles a day, visiting senators and representatives. They attended meetings, shook hands, handed out business cards and Merrill’s Marauders literature, gave interviews and stopped to pose for photos with hundreds of people who wanted to take away a ‘piece of them.’”

Of course, thanks were also expressed for the elected representatives who helped introduce and sponsored the legislation over the past four years, including Congressman Peter King of New York, former Senator Johnny Isakson from Georgia and Congressman Sanford Bishop from Georgia.

Melillo Clasen said the Congressional Gold Medal Act honors the approximately 3,000 volunteers who put their lives on the line in a mission so dangerous that they were considered expendable, with no plan laid for their extraction from Burma. “It also honors the more than 2,000 replacements to the 5307th CUP flown into Burma after only around 200 ragged and emaciated Marauders still capable of combat had seized the airfield,” Melillo Clasen stated. “Those replacements who fought to hold the airfield and capture the town of Myitkyina up until the 5307th CUP deactivated Aug. 10, 1944, will also be honored by the Congressional Gold Medal.”

Melillo Clasen noted that a design for the Merrill’s Marauders’ Congressional Gold Medal must now be selected and then created by artists and engravers with the U.S. Mint, which will cast a single gold medal. That medal will then go to the Smithsonian Institute. Replicas, cast in bronze, will then be created and made available for purchase.

For more information on the history of Merrill’s Marauders visit www.merrillsmarauderspd.org or www.marauder.org