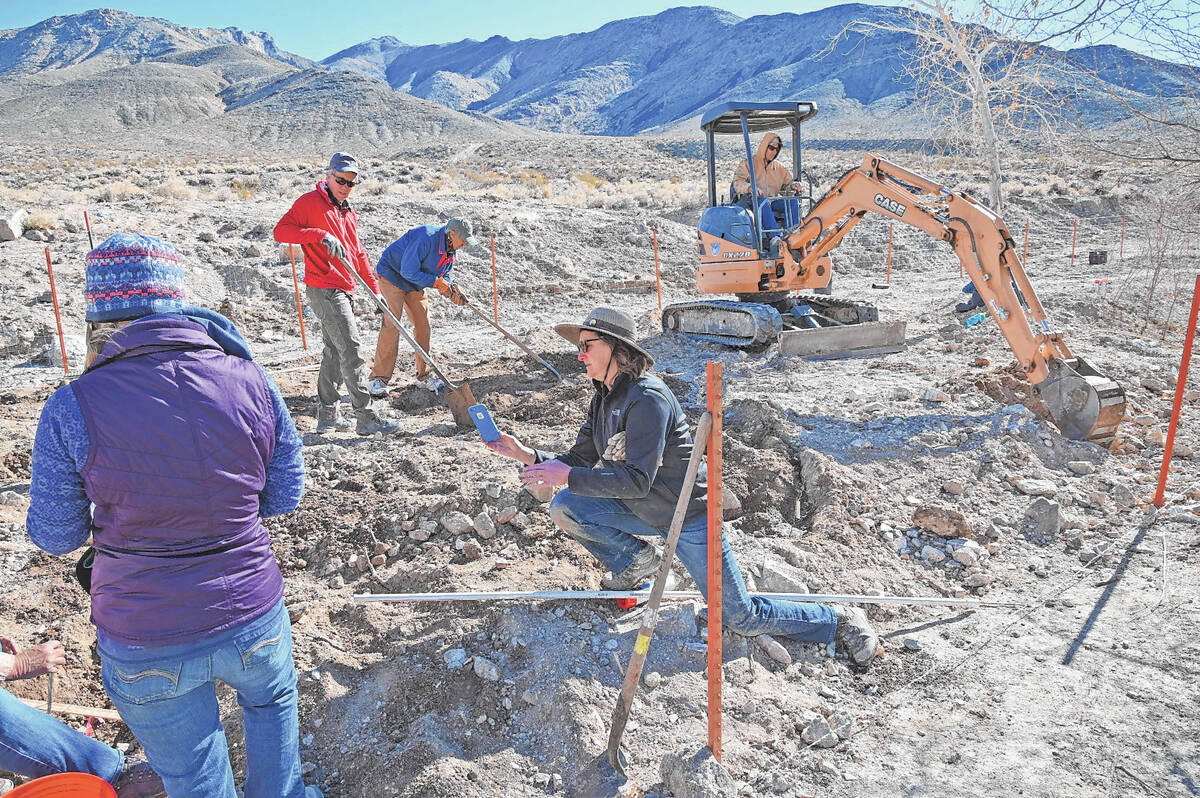 Richard Stephens/Special to the Pahrump Valley Times Volunteers in Nye County managed to plant 56 out of 100 screwbean mesquites and seven of 10 honey mesquites. They plan to come back soon to complete the planting.

BEATTY — Tree planting on Nature Conservancy land just south of town is part of a project that seeks to solve a mystery and contribute to the recovery of an important native plant.

Screwbean mesquite trees have been suffering a die-off throughout the Southwest, including here in the Amargosa Watershed. There are a number of possible culprits behind the die-off — herbicides (such as those used to kill invasive salt cedar), boring insects, a falling groundwater table and a lack of pollinating bees, for instance — but no one knows for sure why the trees are dying.

The tree planting event on Saturday was originally planned to be a community event with as many volunteers as possible, including local children, but the number of participants was reduced to six as a precaution because of COVID-19.

The group managed to plant 56 out of 100 screwbean mesquites and seven of 10 honey mesquites. They plan to come back soon to complete the planting.

The young trees were planted eight feet apart, so they wouldn’t compete with each other for water, sun and nutrients, and three feet deep so that they would touch the water level on the property, which is along the course of the Amargosa River. Beatty local Brad Hunt, with D&H Mining, was a big help, operating a small excavator to dig the holes.

Each of the young trees was given a tag that included identifying the source of the seed it grew from and whether it was inoculated with beneficial symbiotic fungi.

Seeds for the trees came from four locations: the Warm Springs Natural Area (Moapa), Ash Meadows National Wildlife Refuge in Amargosa Valley, Shoshone in California, and Beatty (which is a little farther north along the Amargosa River).

Information about each tree, including the location and depth of planting and the diameter of the stem, was recorded, and Christiana Manville, who oversaw the planting, said that this process actually took longer than the planting itself.

A temporary fence, including a top strand of barbed wire, was installed around the area of the planting to protect the plants from wild burros.

The trees will be monitored by students from the College of Southern Nevada and their professor, Lois Merkler.

The planting was under the direction of the U.S. Fish & Wildlife Service’s Partners for Fish & Wildlife Program, which provided the funds to the Nature Conservancy for the planting and monitoring of screwbean mesquites on private land in Nevada.

Other plantings took place in Ash Meadows, Shoshone and Warm Springs during the fall and winter.

Beatty residents were also invited to have a native tree planted at their homes. Those interested in participating can call or text Christiana Manville at 702-271-6137 or email Christiana_Manville@fws.gov.

*This stoy has been updated to correct the contact info for Christiana Manville.