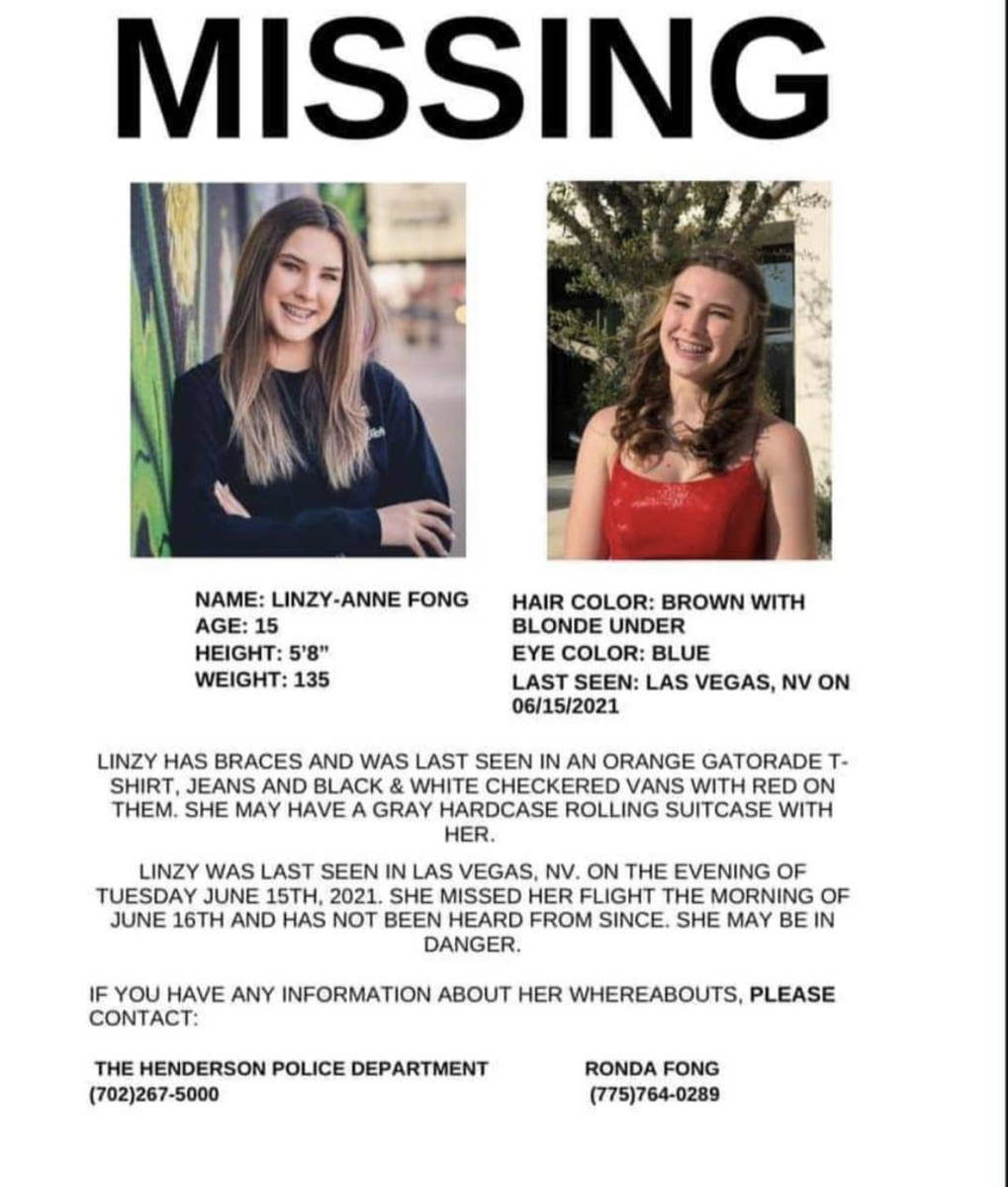 A week-long search for a missing 15-year-old girl ended with a positive outcome on Tuesday.

Ronda Fong, mother of the missing teen stated on social media, “Thank you everyone for sharing, reaching out, prayers and love. We have our baby girl back in our arms and she is safe!!”

Fong traveled to Las Vegas from Texas on Monday to locate her daughter, Linzy-Anne Fong, who had last been seen on June 15. Linzy-Anne was visiting a friend in the area before disappearing earlier this month.

Ronda Fong wasn’t available at the time of this report as she’d just located her daughter but did say she was safe.

The family, which moved to Texas in 2019 and formerly lived in Pahrump, feared the juvenile could have been in danger before locating her.

From what she’d learned prior to finding Linzy-Anne, Ronda said her daughter was dropped off at a residence in North Las Vegas, according to information from a friend, well-known to the Fong family, she was staying with in the Green Valley area.

“They said they had dropped her off at this house of this boy that she had met on the internet that she believed to be 16 years old,” Ronda said in a prior interview. “All she said is that his name is Alex, but that they did not know him, had never met him, did not know what he looked like.”

Ronda said she was told by the family friend that they never saw Linzy-Anne enter the residence she was dropped off at and never saw her daughter meet up with anyone on June 15. Linzy-Anne was scheduled to be on a flight to visit her sister in California on the following day but missed it, according to Ronda.

The last contact the family had prior to locating her was a phone call on Father’s Day from Linzy-Anne. During the call, Ronda said her daughter told her she was OK.

“We asked her if she was being held against her will,” Ronda said on Monday. “She sort of paused and said no. You just never know. We could hear a man in the background talking. She said she was alone.”

Ronda also had other worries about her daughter’s safety.

“She does have Asperger’s, so she has a hard time identifying situations where she might be in danger and not know it,” Ronda said. Linzy-Anne also has asthma, according to her mother, and had left her inhaler behind.

“When confirming her current status through communications this morning her name had been run with a misspelling in error,” Farrell said in the email on Monday.

The Times had reported that Linzy-Anne was found on Monday due to this information from the Henderson Police, but her case was still open as later reported.