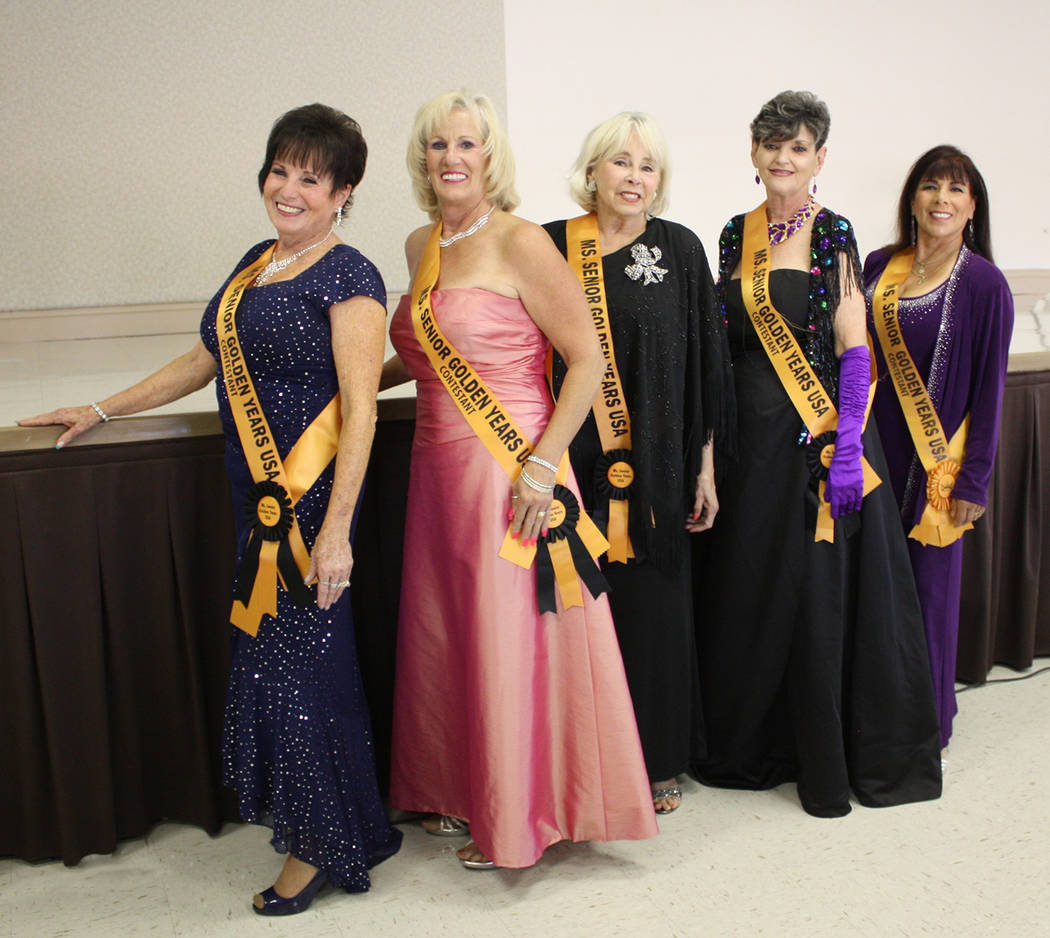 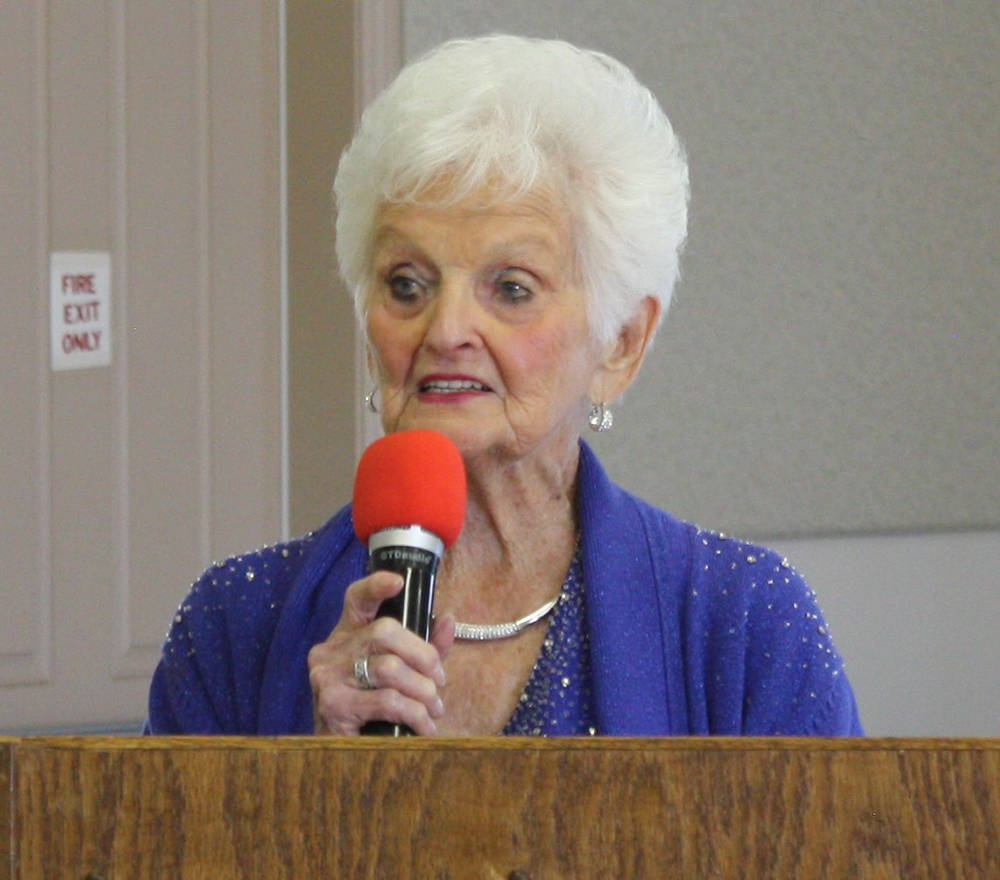 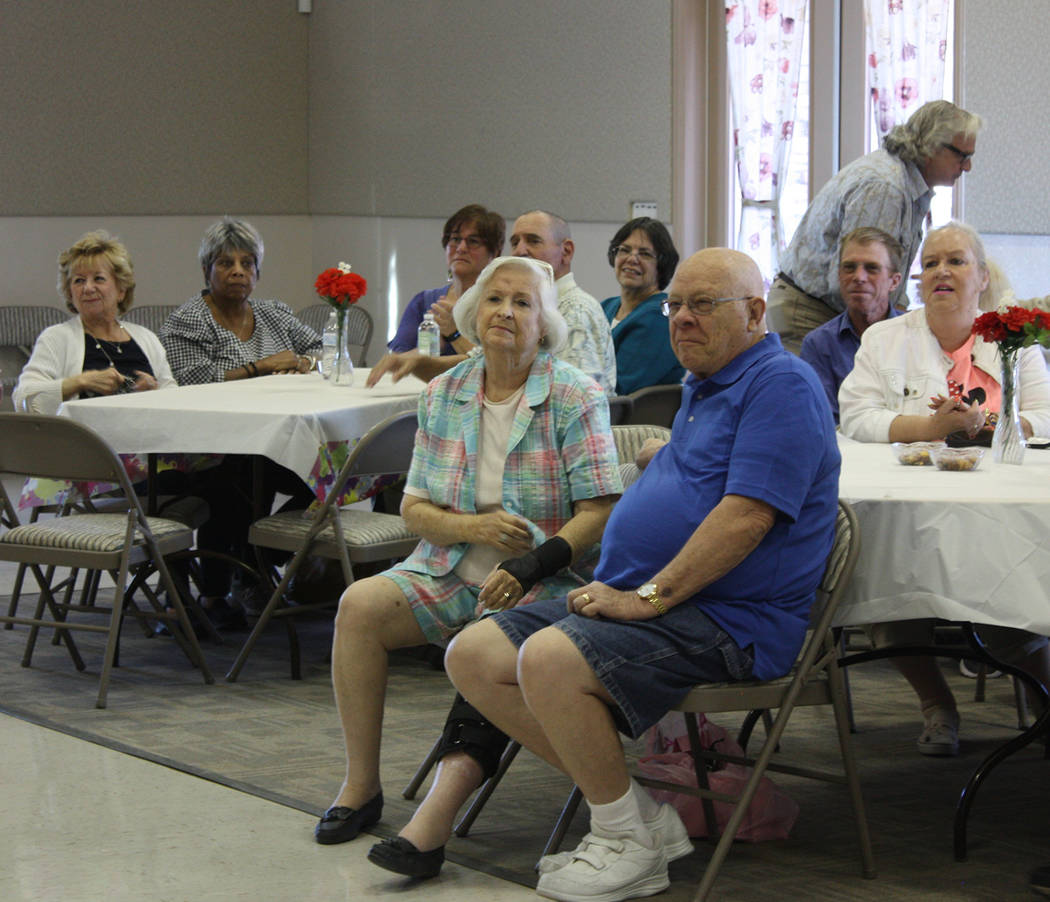 Robin Hebrock/Pahrump Valley Times Doris "Dot" Ahrens may have suffered an injury that will keep her from taking the stage as a Ms. Senior Golden Years contestant this year but she was front and center at the Meet and Greet for her fellow pageant contestants on May 17. 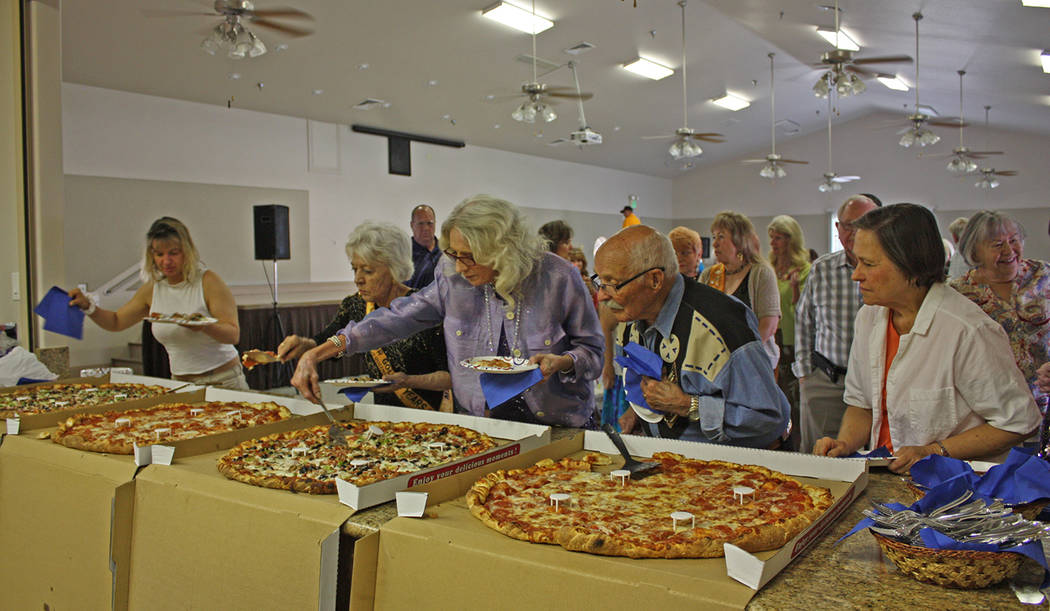 The 2019 Ms. Senior Golden Years USA Pageant contestants were formally introduced to the community at the organization’s annual Meet and Greet which took place inside the Artesia Community Center.

A large crowd of supporters packed into the venue on May 17, with excitement at a fever pitch as the lovely ladies who will vie for the crown prepared for their first official public appearance.

Ms. Senior Golden Years founder B.J. Hetrick-Irwin was obviously enthusiastic about this year’s group of contestants, proudly calling them forward one by one so they could climb the steps to the stage amid a rousing round of applause.

Ms. Senior Golden Years Queen for 2018, Teri Rogers, then mounted the stage for one of her final introductions before she will pass the title of queen to her successor this June.

As the contestants each took a moment to speak to the mass of attendees, Hetrick-Irwin inserted bit of comedy, remarking, “I want you all to take notice of how shy they are today and then when they become queen, watch how they change!” which prompted titters of good-humored laughter from the crowd.

Contestant number one is Marcia Walling, who found her way to Ms. Senior Golden Years through its sister organization, the Nevada Silver Tappers.

“I am a Silver Tapper and being a Silver Tapper, I know what they do for the community,” Walling stated. “And then we have our Ms. Senior Golden Years… and they do all that they are asked to do, they are always there to help everybody and they do a lot for the community. So the reason that I am in the pageant is, I want to do everything I can to help make this a better community.”

Contestant number two is Carmen Murzyn. “The reason why I want to be in the pageant is because you meet so many wonderful, beautiful ladies out here and get involved in the community and do things to help other people. I want to pay it forward to other people,” Murzyn said of her personal motivation to join the pageant.

Betsie Sanders is contestant number three and another member of the Nevada Silver Tappers.

“I am thrilled to be a candidate for Ms. Senior Golden Years. I am delighted to be in this contest and hope I can make a difference for all of us, whether we win or lose. I love this sisterhood of the Silver Tappers and all the special people who have taken part in the pageant. I wish everybody well, these are the best ladies in the world,” Sanders said brightly.

Contestant number four is Larraine Babbitt, who remarked, “I’ve been exposed to the pageant since my mom was in it. And like all these ladies are saying up here as well, it’s such a sisterhood. I saw how my mother just grasped the friendship that she had with all the beautiful ladies and I just want to carry on in her footsteps if I can.”

“I like the ambiance of the small-town atmosphere and the congeniality of the way it used to be in Las Vegas back in the 70s… Now I have a chance to be, actually, it’s my pleasure to be, part of the Ms. Senior Golden Years here and meet my neighbors and help people in need,” Beccia said. “Hopefully this gives me a chance to represent our community.”

Contestant number six was set to be Doris “Dot” Ahrens but unfortunately, she experienced a fall and injured herself.

“I’m feeling much better. I am still tired out but I am doing better. I am going to be on the stage for the pageant, though, I just need a dress that will cover this up,” Ahrens told the Pahrump Valley Times, indicating the braces on her arm and leg. “But I can’t win because I haven’t practiced with them for three weeks. So I am definitely planning to be a contestant next year.”