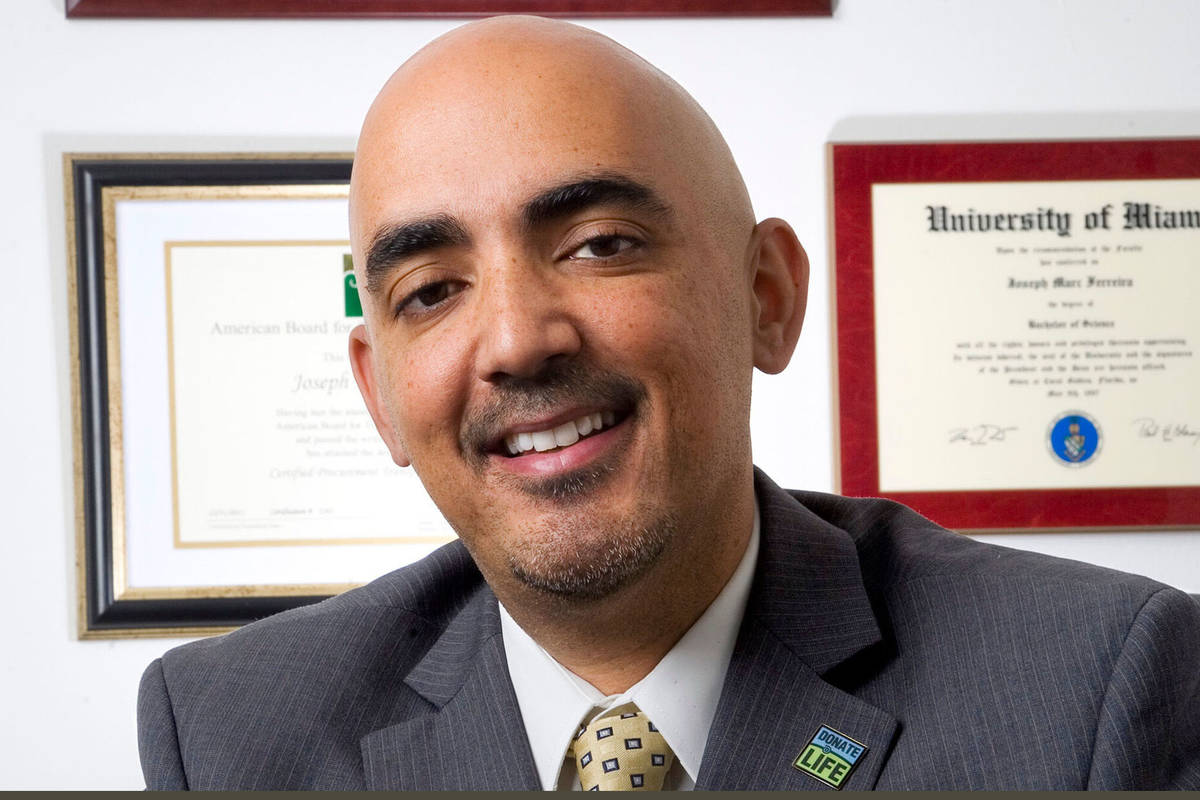 A congressional inquiry this week took aim at Nevada Donor Network and its chief executive, criticizing the organ procurement organization for purchasing season tickets to the Raiders and Golden Knights and funding board retreats to the Northern California wine country.

During a congressional hearing Tuesday on the organ transplant industry, Nevada Donor Network President and CEO Joe Ferreira acknowledged that the organization had purchased Raiders and Golden Knight season tickets and taken board retreats to Napa Valley and Sonoma County in the Bay Area.

Rep. Raja Krishnamoorthi, D-Ill., described the expenses as having one thing in common.

“They have nothing to do with recovering organs for ailing and dying patients on the organ transplant list,” said Krishnamoorthi, chairman of the House Committee on Oversight and Reform’s subcommittee on economic and consumer policy.

“Medicare covers all of the costs of OPOs (Organ Procurement Organizations),” said Krishnamoorthi, who took issue with nearly $150,000 spent by Nevada Donor Network in 2019 on travel, conferences and meetings. “We want our taxpayer money to be spent on collecting organs, not extravagance.”

In response, Nevada Donor Network said in a statement to the Review-Journal, “While NDN does utilize season tickets to the Vegas Golden Knights and the Las Vegas Raiders, taxpayer dollars were not used to purchase them. Entertainment items used for donor stakeholder relations and development are purchased through other funding sources, which include donations and other fundraising efforts. Board governance activities are subject to partial reimbursement, utilizing taxpayer funds, per the discretion of CMS (Centers for Medicare & Medicaid Services).

“Our mission as an organization also involves community engagement and awareness through partnerships with community leaders and donation stakeholders. NDN views its investments in these powerful engagement tools as supporting our mission,” said the organization, which is widely regarded as one of the top-performing OPOs in the country.

Krishnamoorthi said whistleblowers have accused Ferreira, who is also president of the Association of Organ Procurement Organizations, and others of backing a strategy for impeding the congressional investigation into the industry. The strategy was to provide “slow and incomplete answers so that his team — namely me, my team — gets distracted and moves on,” he said.

The bristling chairman asked Ferreira, “After what you’ve heard and seen this morning, you don’t think that I’m going to be moving on from this investigation, do you?”

“That’s good because I’m not moving on,” the chairman said, who said he would remain focused on ensuring that OPOs and their trade association “live up to the standards that they should live up to, and that our Medicare tax dollars are spent properly.”

On Friday, a senior Democratic committee aide said the subcommittee will request from both Nevada Donor Network and the trade association an accounting of all categories of expenses it believes may have been excessively charged to the taxpayer through Medicare, either directly or indirectly.

The Nevada Donor Network said in its statement that it would cooperate with any inquiry.

“Should we receive such a request, we will absolutely cooperate,” it said. “Our financial statements are a matter of public record, and we are committed to openness and transparency.”

During Tuesday’s hearing, Ferreira, as president of the trade group, had testified that the association was working to improve the performance of OPOs in the U.S., where more than 100,000 people are awaiting organs for transplant.

Yet on the day of the hearing, six of the nation’s roughly 60 organ procurement organizations quit the trade group, saying it was lobbying against reform that could save lives.

The trade group has lobbied against a new federal policy designed to make organ procurement organizations, which function as monopolies in their regions, more accountable for ensuring transplants of as many organs as possible. The policy also introduces an element of competition; underperforming organizations will have to compete for their government contracts.

Matt Wadsworth, chief executive of one of the breakaway OPOs, testified, “For patients, we’ve turned the organ donor waiting list into the ‘Hunger Games’ in the arena of our own making, while we watch 33 Americans die every day.”

“Simply put, there’s been no consequence to OPOs for allowing patients to die, as geographic monopolies are not subject to any competitive pressure to provide high service,” said Wadsworth, president and CEO of Life Connection of Ohio.

Despite his maverick role, Wadsworth, who for three years ending in late 2019 worked as a vice president for Nevada Donor Network, said in an interview that he saw value in his former employer’s spending on travel and meetings.

“I don’t think it’s fully accurate that that money wasn’t spent on saving lives or increasing donation,” he said. “Did it have to be $147,000? Probably not.”