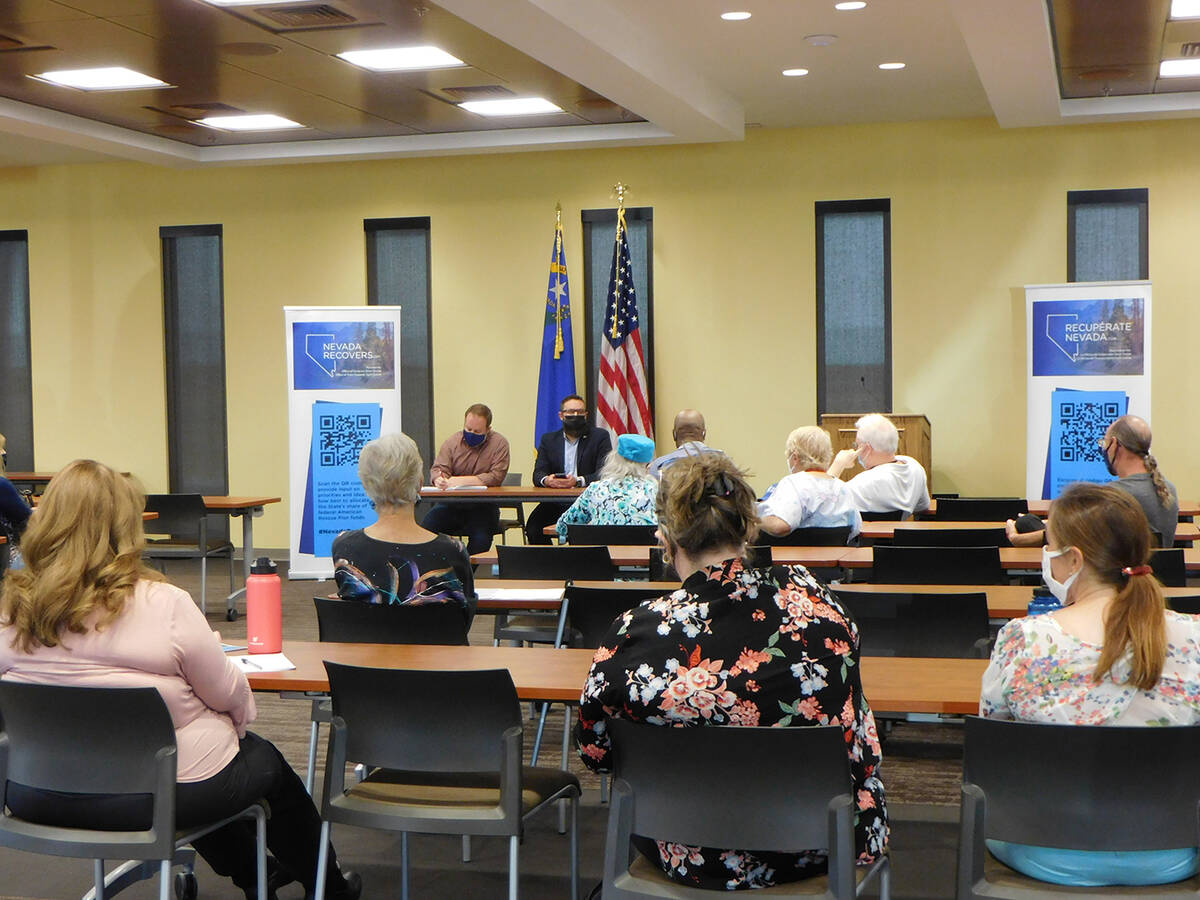 Robin Hebrock/Pahrump Valley Times The Nevada Recovers Listening Tour made a trip to the Pahrump Valley on Thursday, Sept. 30, giving residents the chance to express their thoughts on how the state should spend its billions in COVID-19 recovery funding. 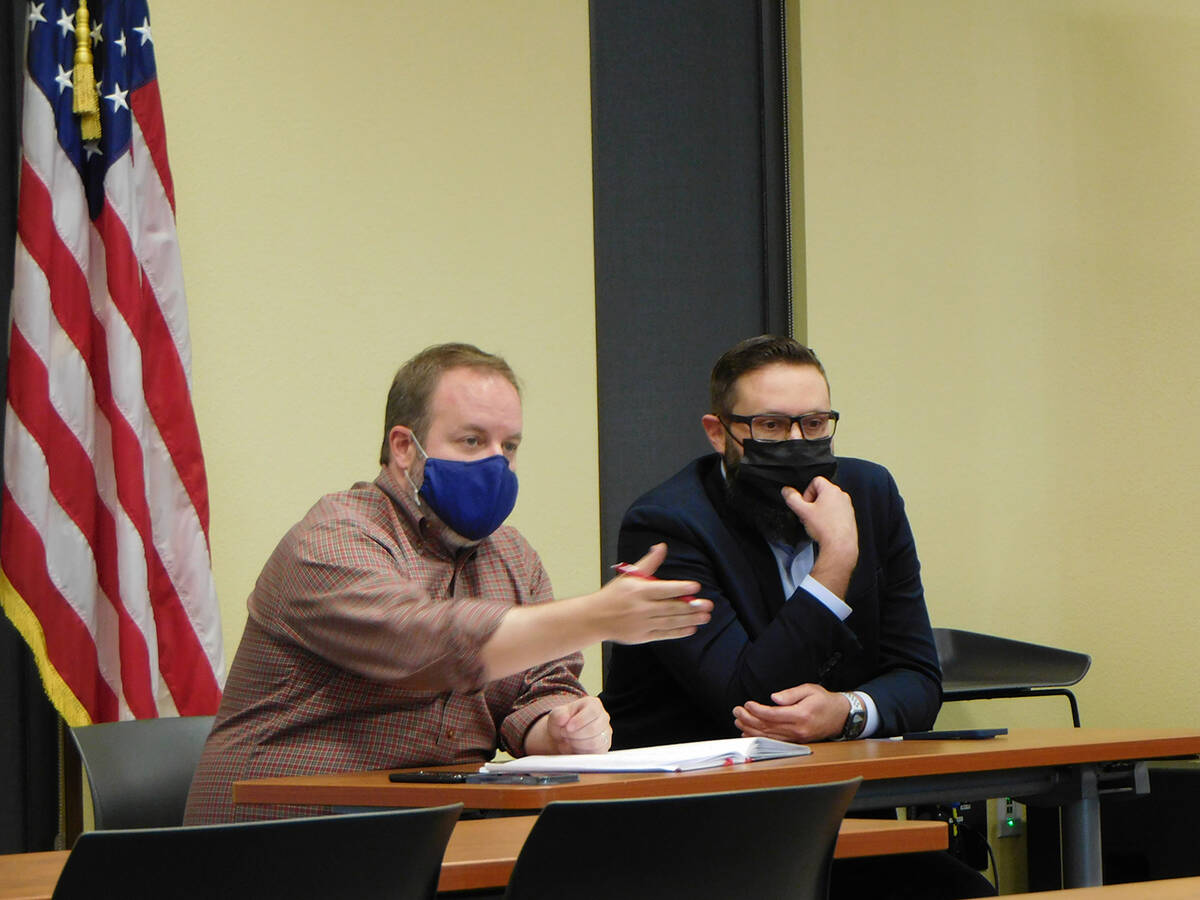 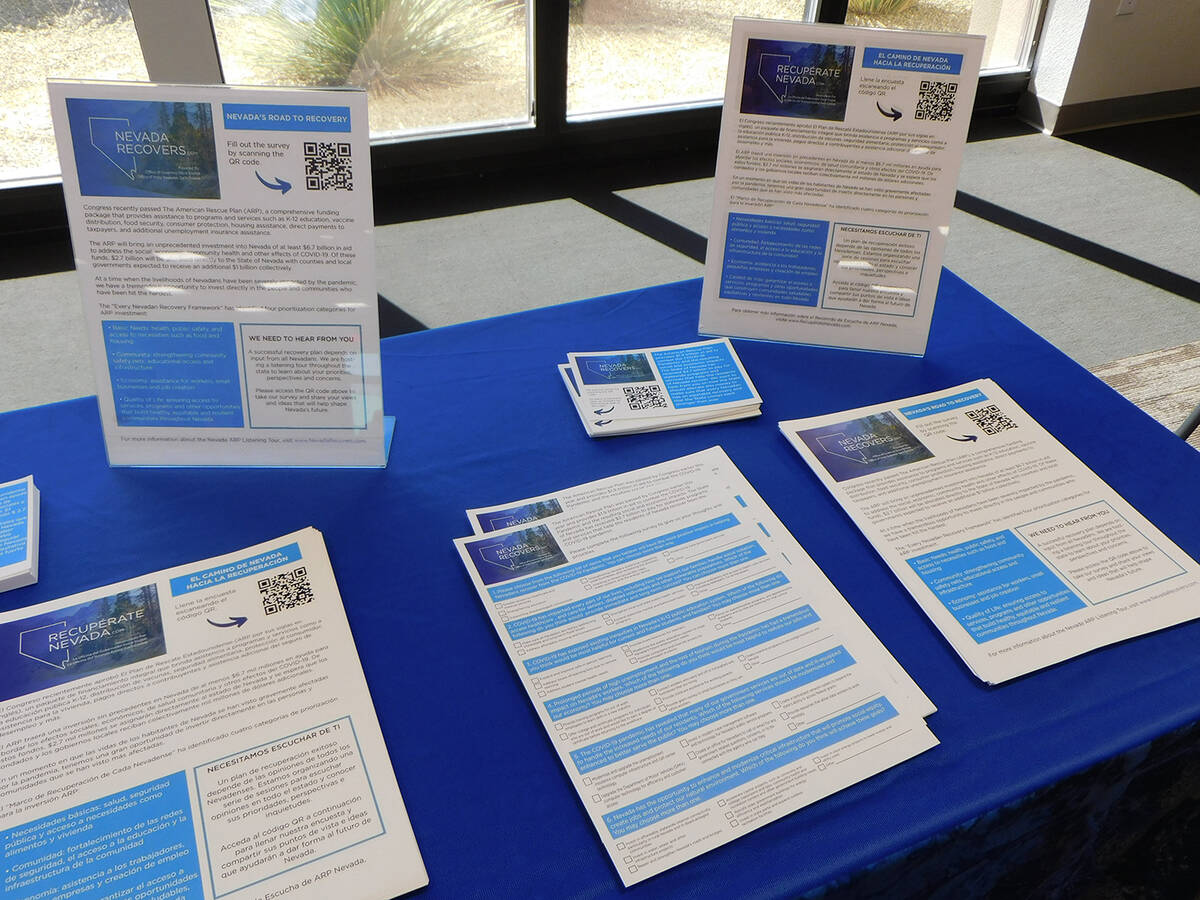 Robin Hebrock/Pahrump Valley Times There were informational sheets and surveys available for attendees of the Nevada Recovers Listening Tour event in Pahrump.

With billions of dollars in federal COVID-19 recovery aid making its way into the state’s coffers, Nevada State Treasurer Zach Conine’s office and the office of the Nevada governor have teamed up to host the Nevada Recovers Listening Tour, an initiative aimed at gathering public input on how the state can best put those federal dollars to use.

As part of that outreach effort, Conine made a stop in the Pahrump Valley last week to speak with members of the local community and hear their take on the American Rescue Plan Act, or ARPA, spending. Listening Tour attendees came with plenty of ideas to throw his way, touching on issues such as mental health, education, economic development and the homelessness problem, among others.

Pahrump Valley Chamber of Commerce Chief Executive Officer Jenny Sartin kicked off the conversation last Thursday with the mental health aspect, remarking that the COVID-19 pandemic had created a huge amount of stress and strain that could easily lead to more serious mental health conditions.

She said the state needs to consider a program to help people who have suffered emotional turmoil over the past year and a half, remarking, “Perhaps whether it’s learning new skills, coping skills, helping them, because I think what we are going to find is there is going to be an increase in post-traumatic stress disorder… Even those of us who consider ourselves to be reasoned, rational, strong-minded individuals, we’ve all felt it, we’ve all been touched by it.”

Resident and Pahrump Valley Rotary Club President Eddie Williams spoke next, offering his thoughts on the need for public transportation. The town is home to the Pahrump Valley Public Transportation System, the only such system available in Nye County, and Williams said it would be very helpful for economic recovery as well as public health if there were other resources established. In addition, he said housing is a big problem, with very little affordable housing options in Nye County. If there were more affordable residences available, it might be easier to recruit new career professionals, such as teachers, to the area.

Paul Healey, a member of both the Valley Electric Association Board of Directors and Pahrump Chamber of Commerce Board of Directors, centered his comments on the slow growth of businesses in town. Many young residents, once they graduate high school, leave the valley to seek career opportunities elsewhere and if there was more business development, there would be a greater incentive for those young people to stay in their hometown. This could be fostered by the state assisting in development of infrastructure along Highway 160, as the lack of water, sewer, electrical and other utilities makes the cost of developing on land along that highway too high for many companies to even consider. “At the end of the day, the best social service we can provide, I believe, is a job,” Healey asserted.

Sartin jumped in to express her agreement, remarking that a lack of infrastructure, “is killing our small communities.”

To this topic, Conine said such development likely wouldn’t be covered by ARPA funding but it was still very important for people to submit all ideas rolling around in their minds, because other funding sources might be available. As an example, if Congress passes the infrastructure bill it is currently working on, there may be monies from that which could be used to bolster local utility infrastructure.

Healey turned then to homelessness, emphasizing that though Pahrump doesn’t have a huge amount of homeless individuals, the percentage is still too high to be acceptable. “I don’t know whether there is a way to set up an endowment fund to build something so these folks have a place to go, I don’t know, something simple like that but just before it gets out of hand like it really is all over this country,” he stated.

Area resident Robin Gibbons came prepared with a few very specific requests, remarking that the Pahrump Senior Center needs renovation, along with a PA system to help the seniors more easily hear what is going on. The Pahrump Valley Museum would also be bettered with a handicap walkway, as right now, no such walkway exists, Gibbons stated.

“This is legitimately why we are here,” Conine said in response to Gibbon’s comments. “And what we need your help with is not just getting those things into the NevadaRecovers.com system… but number two, sharing this message with your friends, your family and other people.”

Another resident with a concrete idea of how to expend some ARPA funding identified herself as Kimberly and she recommended the state look into constructing a shelter for those escaping domestic violence situations, instances of which had increased dramatically during the pandemic. Conine said this was a perfect example of a one-time expenditure and he was delighted to have the idea proposed that afternoon.

Resident Katreen Romanoff, as a former teacher herself, focused her comments on education, noting that it wasn’t so much funding that she was concerned about but getting better teachers into the local education system so the students have a strong learning environment. To this, Sartin noted that she believed it was high time for the state to increase its teacher certification standards, which were lowered decades ago. Once again, while this idea was not something that fit into the scope of ARPA, Conine said it was still imperative for such proposals to make their way to the state, so the state can respond accordingly.

Nye County Commissioner Frank Carbone chimed into the discussion to hit on a hot topic locally, the need for increased medical care options. He said he would love to see the Pahrump hospital, Desert View Hospital, expanded and the outlying communities, particularly Tonopah, are in need of a hospital as well. Another women suggested the state establish an incentive program of some kind to attract doctors and nurses to Nevada communities and Conine noted that student loan forgiveness programs might be the way to go when it comes to that.

Throughout the more than hour-long conversation, many other ideas were broached as well, each of which were carefully noted by members of the treasurer’s and governor’s offices who were on hand to observe the meeting. The key takeaway from the gathering seemed to be the necessity to have specific ideas submitted through the online portal that has been set up, so the state can compile those ideas and figure out how to tackle them in the coming years.

Anyone who is interested in taking the Nevada Recovers survey, which poses general questions on what direction residents would like to see the state pursuing with its ARPA funding, and those who have specific ideas to submit should visit www.NevadaRecovers.com