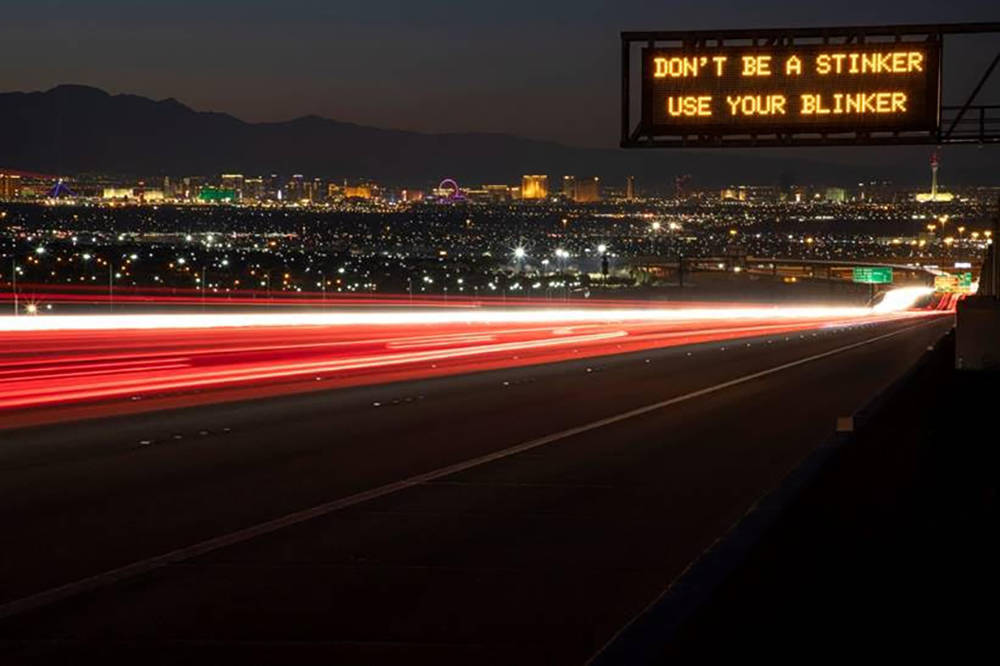 Special to the Pahrump Valley Times NDOT is asking Nevadans to vote on which safety messages they would like to see displayed on freeway signs throughout the state.

They stick to the minds of those who read and hear them, are easily recalled and often bringing a grin or chuckle with their witty wording, allowing the message they present to unobtrusively cement itself. And while they are often utilized by businesses and organizations as a means of drawing attention and revenues to those entities, they are equally as advantageous when employed by governmental agencies seeking to raise awareness about a particular problem or issue.

For the Nevada Department of Transportation, the issue to address is, of course, safety on the roadways and over the next month, residents of the Silver State will have the opportunity to help determine which safety messages will make their debut on area freeways in the near future.

“The Nevada Department of Transportation (NDOT) is inviting Nevadans to vote on traffic safety messages to be displayed on electronic freeways signs throughout the state,” a news release from NDOT announced.

The new release explained that this is a continuation of a contest that started in 2020 but was disrupted, just as many other aspects of normal life were, by the COVID-19 pandemic.

“In summer 2020, NDOT invited Nevada drivers to submit contest entries for traffic safety messages to be displayed on freeways signs. Nearly 1,000 submissions were received. All were closely evaluated based on creativity and relevance to Nevada traffic safety and signage needs,” the news release read.

Despite the enthusiastic response by local residents, plans to have the winners of the safety message contest announced in September 2020 were delayed due to the decreased traffic all around the state that came as a result of the COVID-19 pandemic. However, as Nevada and the rest of the country slowly trend back toward normalcy, people are starting to get out and about once again, with many work-from-homers returning to the office and others hitting to road for vacations and recreation, which means traffic on Nevada’s freeways is beginning to reach pre-pandemic levels and it’s now time to get the new safety messages out to the public.

“Now that traffic volumes are returning to normal, NDOT has resumed the contest and is inviting Nevadans to… vote for their top three selections….” the news release stated.

Residents have 11 choices to select from, including:

■ When Driving Use Your Thinker and Your Blinker

■ That’s the Temperature, Not the Speed Limit

■ It’s Not a Race, Leave Some Space

■ There is No Need to Drive at Warp Speed

■ Your Seat Belt Looks Good on You

■ Gamble at the Casino, Not Your Car. Buckle Up!

■ Camp in the Mountains, Not the Left Lane

■ Turn Signals Come Free with Vehicles. Use Them

“The messages, which were all submitted by Nevadans, are a mix of popular national driving safety messages and original messages. The winning messages will periodically be displayed on some of the approximately 400 electronic freeway signs statewide,” the news release detailed. “As summer travel season approaches and certain health restrictions loosen, increased freeway travel will give more visibility to the important traffic safety messages.”

NDOT Director Kristina Swallow extended her thanks to those who have taken part in this important safety initiative, which is hoped to reduce the sort of poor driving behaviors that are reportedly the cause of over 90% of vehicle crashes in the U.S.

“Speeding or driving impaired, distracted or recklessly are choices we make, and those choices can have deadly consequences,” Swallow stated, with the release noting that nearly 315 individuals were killed in Nevada crashes in 2020 alone. “We appreciate everyone who invested their time and talent to contribute effective messages that can be a first-line defense is reminding motorists in Nevada to drive safely.”

Votes for the safety message contest can be cast online by visiting dot.nv.gov/sign

All votes must be made before June 15.