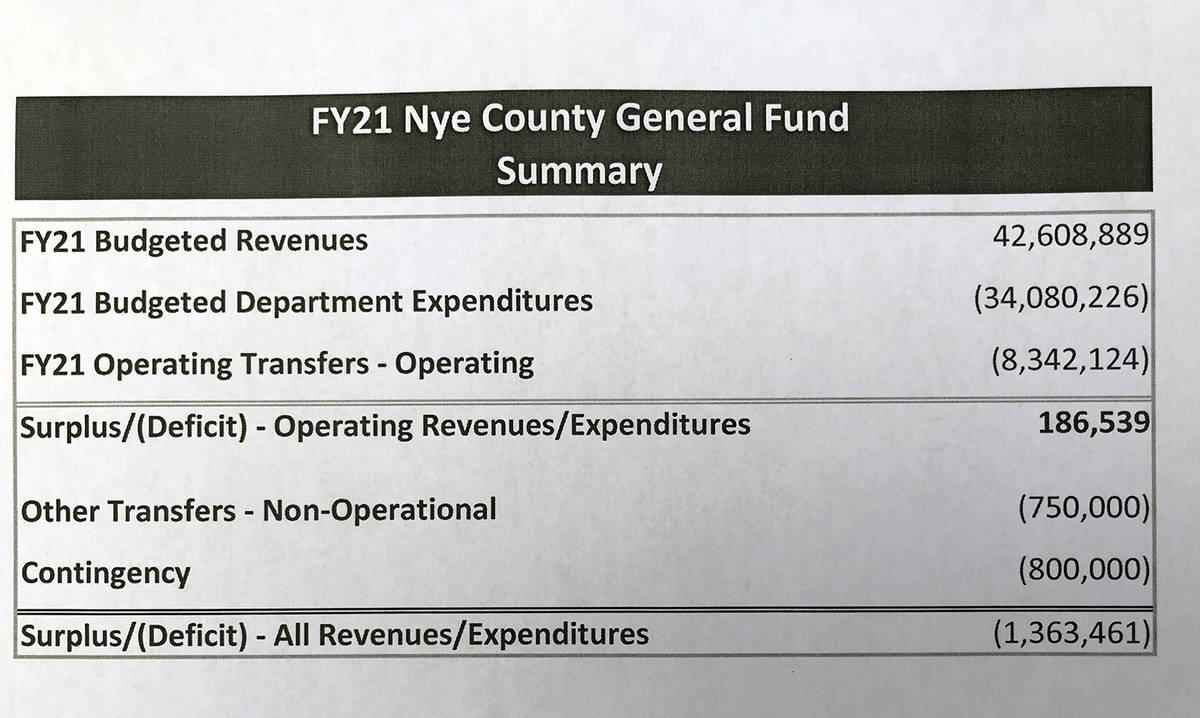 Special to the Pahrump Valley Times Information provided with the budget presentation during the Nye County Commission's May 29 meeting is shown. 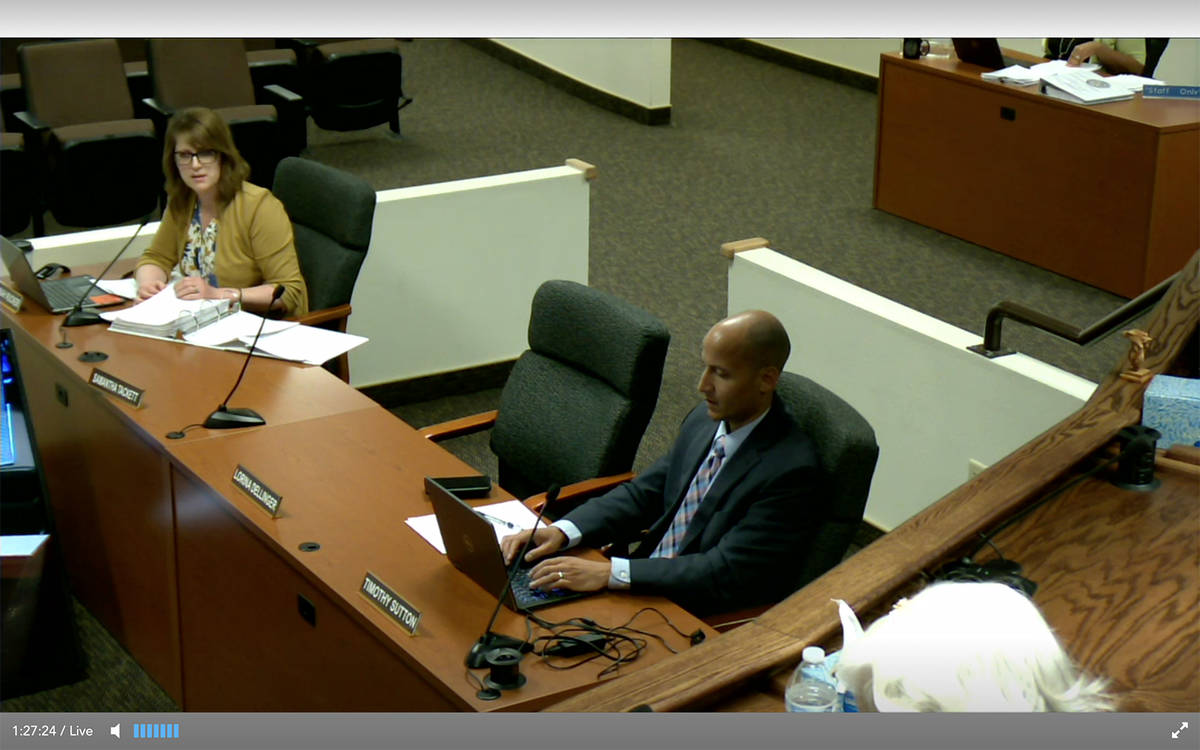 Following almost weekly discussion over the past two months regarding the county’s financial outlook in light of the COVID-19 outbreak, the Nye County Commission gave approval to its final budget for the coming fiscal year, which begins July 1, during a special meeting held Friday, May 29.

Nye County Comptroller Savannah Rucker walked the commission through the budget presentation, which included the in-depth documentation to be sent to the Nevada Department of Taxation along with summaries provided by Rucker to make the complicated document more digestible. A key takeaway from the presentation was the fact that the county must rely on approximately $1.3 million of its current fiscal year ending fund balance to meet its anticipated expenses in fiscal year 2021, as its revenues are projected to fall short of total expenses in the coming fiscal year.

The county general fund for fiscal year 2021 is projected to start with a beginning fund balance just over $10.1 million. Calculated with projected revenues of $42.6 million, total resources are estimated to come to $52.7 million.

Department expenditures for the general fund are projected at $34 million. Adding in operating transfers of $8.3 million, non-operational transfers of $750,000 and contingency in the amount of $800,000 the county is expecting to spend $1.3 million more than it earns in revenue over the next 12 months.

However, contingency funding may not be spent, meaning the amount of expenditures versus revenue could change by the end of fiscal year 2021.

The 2021 general fund budget includes all assumptions approved by the commission on May 11 during the county’s budget workshop, which Rucker also summarized in the information attached to the budget agenda item.

“The first item is the reduction of of the capital transfer for Net Proceeds. We are utilizing $299,381 of Net Proceeds as operating (funds) to help us bridge the gap between our budgeted revenues and our budgeted expenditures,” Rucker explained. “This represents about 15% of the Net Proceeds we’re expecting to get in fiscal year 2021, so even if that revenue source falls short, we’re not utilizing so much of it that it’s going to cause us a problem.”

When the commission originally discussed how it would rearrange its budget to account for the loss of revenue from the COVID-19 outbreak, one item that Rucker had picked for possible reductions was the funds meant to defray the ever-growing liability associated with the county’s other post-employment benefits program, which provides health insurance to county retirees. However, commissioners were hesitant to eliminate the funding for those future costs and Rucker was able to make an adjustment that ensured funds would be available for that liability.

“The second line is the reduction of the capital transfer for OPEB (other post-employment benefits) pre-funding. Again, same idea, OPEB pre-funding is pre-funding for future liability. We’re going to utilize Net Proceeds to maintain that transfer and continue pre-funding OPEB obligations for the future,” she detailed.

There were also adjustments made to all general fund departments and the jail fund transfer. For services and supplies, all departments have been reduced by 7.5% for a total savings of $547,500. For salaries and benefits, applying a 4.6% vacancy rate allowed for a savings of $1,380,000. The county currently has a hiring freeze in place, with Rucker explaining that each department will be able to begin hiring once again when they have realized the 4.6% savings outlined in the 2021 budget.

In addition, Rucker projected a savings of $735,000 for for all general fund departments and jail fund transfer for employee concessions but she noted that this figure could change, depending on the county union’s reaction to the request for concessions.

“I’d like to discuss this further. At this point in time we don’t have confirmation of how the employee concessions by collective bargaining unit are going to be moved forward,” Rucker stated. “So what I did with this dollar value is, I applied this as a pro-rata reduction of all departments across the board in the general fund evenly. This comes out to about 2.25% of salaries and benefits so all departments were impacted. However, as soon as we know what the collective bargaining units, what we have negotiated with them by way of these employee concessions, I’ll bring forward an item to rectify that based on where those dollars actually land. This was the best mechanism I could use to move this budget forward and build in those employee concessions.”

Property tax rate modifications were noted in the budget presentation as well but Rucker was quick to emphasize that the tax rate has not been increased in any way. The disbursement of the existing tax rate has simply been adjusted.

“I’d just like to repeat that for the public. Taxes are not going up for Nye County,” Nye County Commission Chairman John Koenig reiterated.

To view the budget presentation in full visit www.nyecounty.net and click on the “Meeting Center” link. The information is included with the commission’s May 29 agenda.