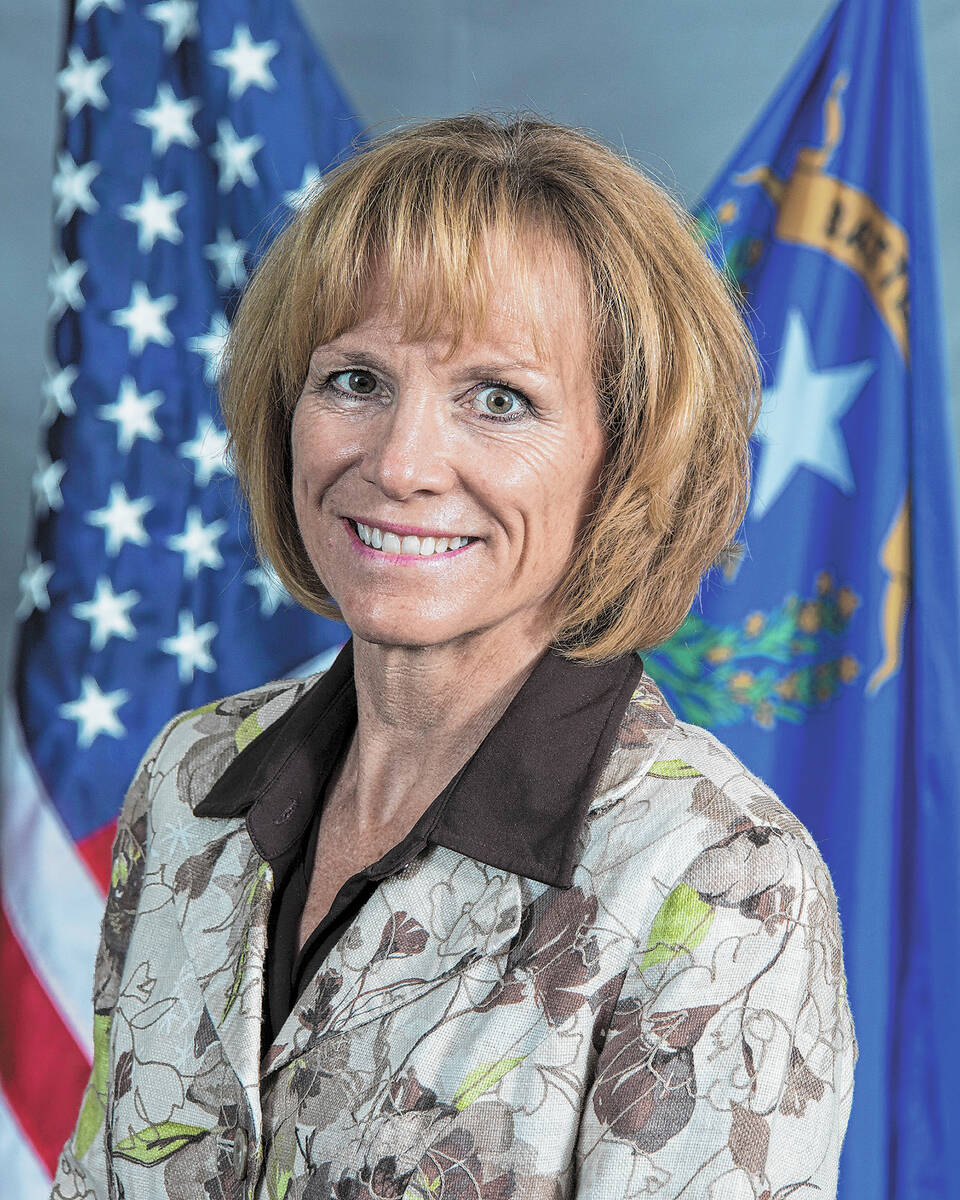 Special to the Pahrump Valley Times Nye County Clerk Sam Merlino will officially retire on August 5, which Nevada Governor Steve Sisolak has proclaimed as a day to honor Merlino for her many years of service. 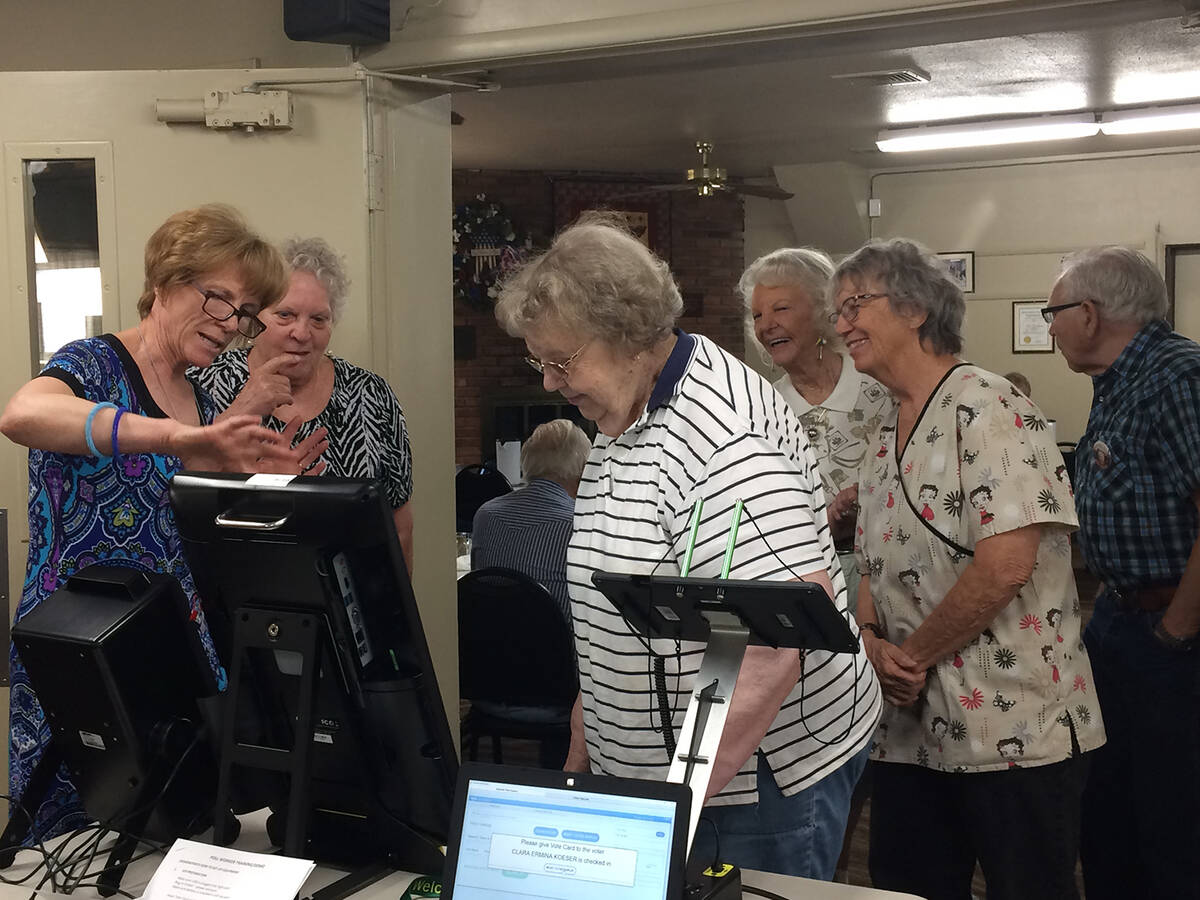 Robin Hebrock/Pahrump Valley Times In this file photo, Nye County Clerk Sam Merlino is pictured showing residents how to use newly acquired election equipment. This year, the county commission has voted to make the general election an all-paper-ballot and hand-counted election, which was one factor that prompted Merlino to step down as clerk before her term is over. 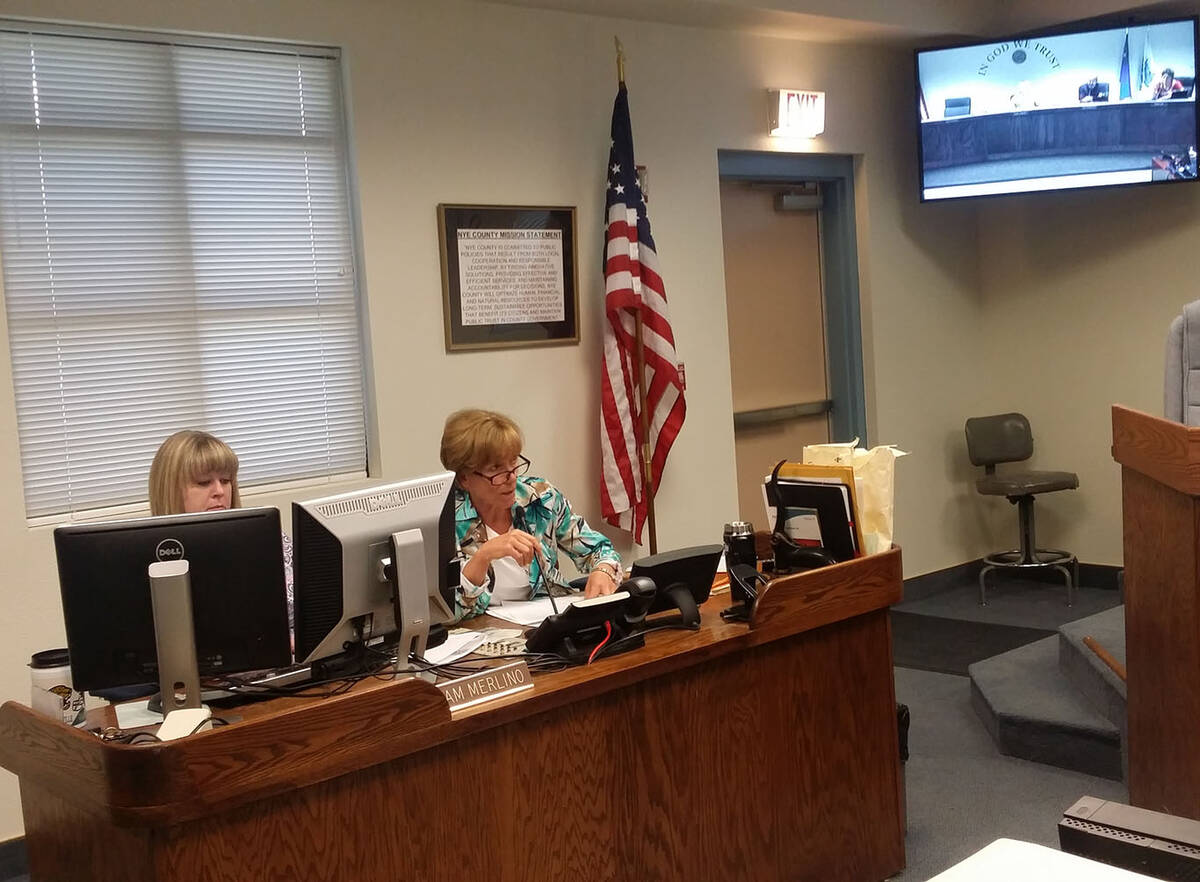 Special to the Pahrump Valley Times At right is Nye County Clerk Sam Merlino, shown speaking at a 2016 meeting of the Nye County Commission. In addition to running local elections and acting as clerk of the court, much of her time in office has been spent attending the bi-monthly meetings of the commission.

After 28 years of service in local county government, Nye County Clerk Sandra “Sam” Merlino is set to retire and as evidenced by the outpouring of gratitude and congratulations she has recently been receiving, she will no doubt be greatly missed.

Aug. 2 was an emotional day for Merlino, who attended her last Nye County Commission meeting as an elected representative.

Her fellow county officials were not about to let Merlino’s retirement go unremarked upon and they, along with several other officials throughout the state, took the opportunity to recognize her for her many years of hard work and dedication. A plethora of plaques were presented and Nevada Governor Steve Sisolak even issued a proclamation naming Friday, Aug. 5, Merlino’s last day in office, as a day of appreciation in honor of her tenure as clerk.

The presentations started off with Joni Eastley, who worked with Merlino for years prior to her own retirement from county government, reading a letter from Nevada Secretary of State Barbara Cegavske into the record and handing the first of a series of plaques to a humbled Merlino. Eastley then read aloud from the proclamation issued by Sisolak.

“‘Whereas Sandra ‘Sam’ Merlino was appointed to the post of Nye County Clerk in 2000 and subsequently elected without interruption since the general election of November 2002, and whereas Sam has supported the Nye County electorate as it nearly doubled in size…’” Eastley recited. “‘And… Sam has faithfully served the citizens of Nye County for more than 20 years and her integrity and relentless work ethic have left a positive imprint on every Nye County resident… Now, therefore, I, Steve Sisolak, governor of the state of Nevada, do hereby proclaim Aug. 5, 2022, as a day in honor of Sam Merlino.’”

Assemblyman Greg Hafen II, Nye County Sheriff Sharon Wehrly and Nye County Commission Chair Frank Carbone each bestowed a plaque as well and both Joe Westerlund of the town of Tonopah and Nye County staffer Lorinda Wichman, who is a former commissioner, offered their own sentimental thoughts.

A teary-eyed Merlino was obviously touched, remarking, “This has been completely overwhelming. It’s bittersweet. I want to thank everyone. I will miss everyone. I have really enjoyed my time and I appreciate everyone. And like I said, my staff makes the office, so I have to thank them.”

As for how Merlino is feeling now that her retirement is just around the corner, she told the Pahrump Valley Times that it’s been a bit of a roller-coaster ride.

“One minute I am like, ‘Oh, I am so glad I’m going to be out of here’ and the next, I am stressed and worried about making sure everything is done, with the election coming up and who’s going to replace me. So it’s mixed, day to day,” she said.

Merlino began her career with Nye County as commission clerk in 1994. In June 1999 she had a brief stint at the Nye County district attorney’s office, after which she was appointed as Nye County clerk in 2000. She ran for election the next cycle and has continued to serve as clerk for two decades but she said there comes a moment in everyone’s career when they know it’s time to hang up their hat.

“It’s time,” Merlino explained when asked what prompted her retirement. “Everybody has their time, when you realize you’re not as enthusiastic as you used to be.”

She said the pandemic really took a toll on her, with the institution of new COVID-19 restrictions and the introduction of all-mail-in ballots, followed by a tumultuous time in which people are continually making accusations of election fraud. All of this added up to her decision to retire before the end of her term but August 2022 was not her initial target retirement date.

Merlino said she was originally planning to step down in December 2021 but had decided to stay on due to the redistricting process that followed the 2020 Census, to which she did not want to abandon her staff. She was then going to fulfill the last year of her term but a vote by the Nye County Commission, requiring the 2022 general election be conducted with paper ballots and a hand-count, pushed her to once again change her plans.

“Truthfully, it was that agenda item in March that made me make my decision to go earlier, because I absolutely do not agree with hand counting all paper. I’ve been through paper ballots and hand counting and I have no desire to go back to that,” Merlino told the Times.

When it comes to the relationships she has built and the experiences she has gone through, Merlino said there are plenty that leave an impression on her mind. But in the end, it’s the Nye County commissioners, of which she has seen many come and go, who left the deepest mark.

“Every election is memorable and court, of course, is always memorable but mostly, it’s the commissioners,” Merlino remarked. “When you think about it, I have been attending two commission meetings every month since 1994, with the exception of those few months I spent with the DA’s office, and that is a lot of commission meetings. So most of my memories are of our commissioners, the different personalities, and truly, there have been some good memories there.”

When asked how she’s going to spend her free time now, Merlino laughed and replied, “That’s a good question!”

She said she doesn’t have any major objectives to pursue outside of enjoying her family, her yard and tinkering with various projects that have taken less precedence in previous years. It’s going to be a big transition for someone who has been working since the age of 12 but Merlino said she is looking forward to finding out just what retirement is like.