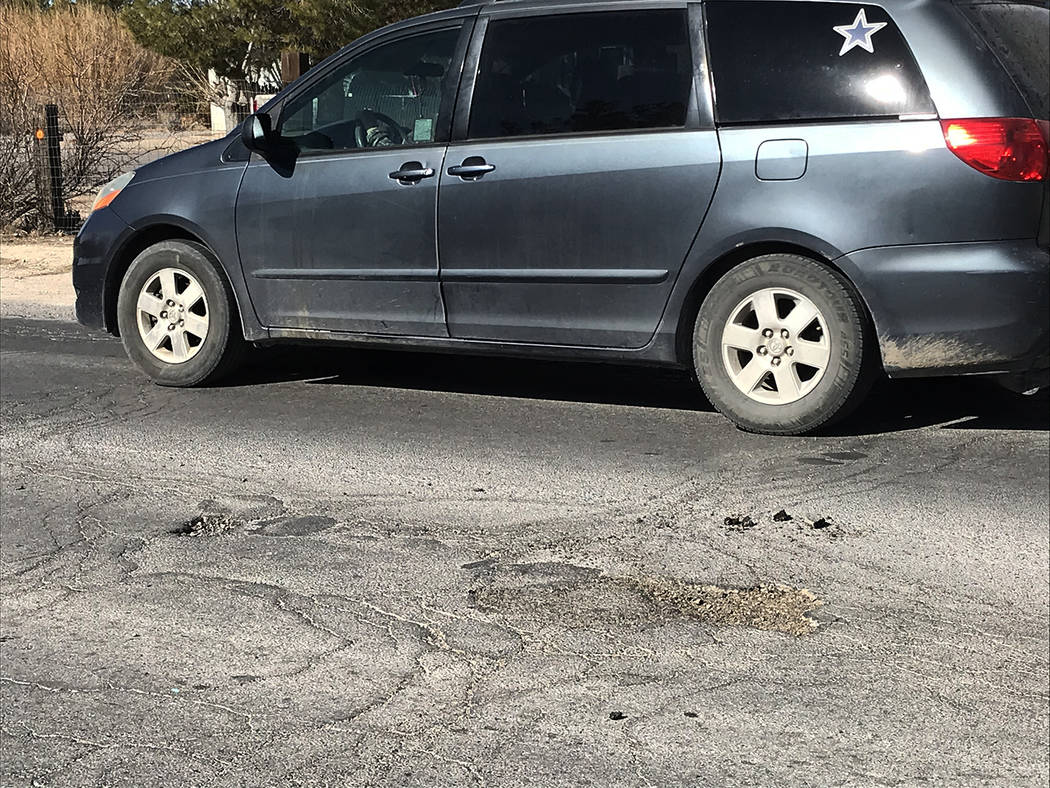 Robin Hebrock/Pahrump Valley Times Wilson Road between Highway 160 and Blagg Road has been deteriorating for many years and Nye County Public Works Director Tim Dahl said a portion of the rebuild of that road could be funded with the Ishani Ridge bond monies, as well as county capital improvement funds that have been accumulating for years for that purpose. 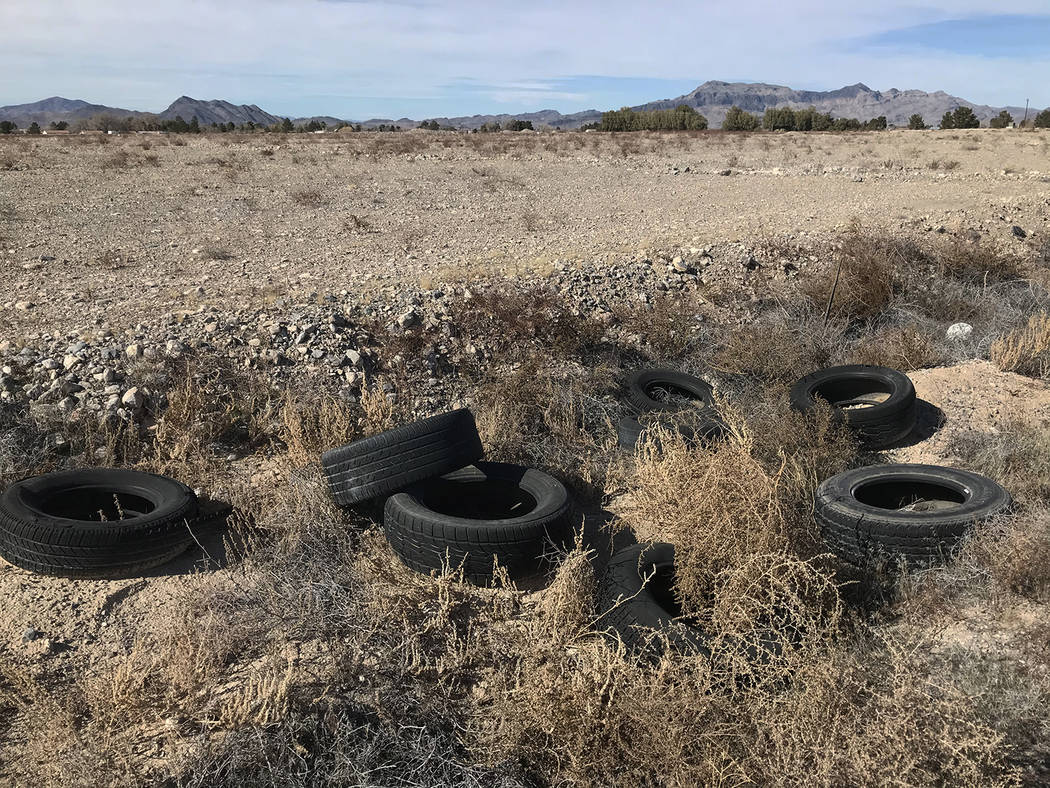 Robin Hebrock/Pahrump Valley Times A pile of discarded tires on the side of one of the few paved roads in Ishani Ridge is a visual blight within the uncompleted subdivision, along with an abundance of weeds throughout the 88 acres of land mapped and recorded for that development. 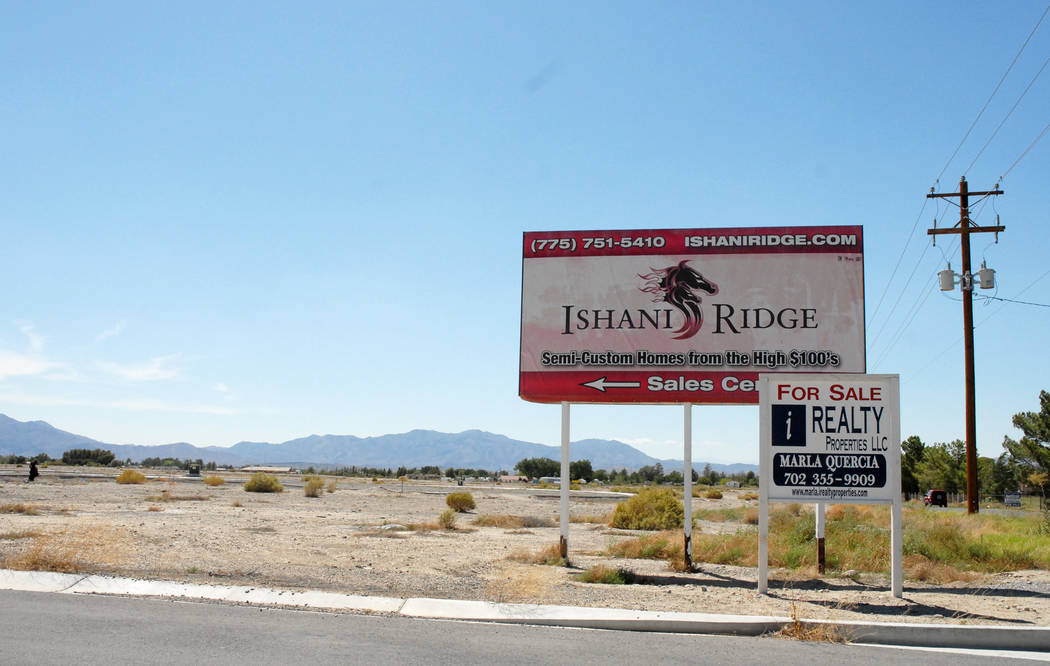 The bond payment of more than $3.42 million will be deposited into the Nye County Capital Projects Funds, where county officials said it will be separated from other monies within the fund to be used exclusively on the subdivision improvements.

During the commission’s Feb. 4 meeting, Nye County Commissioner Lorinda Wichman made the motion to approve direction to the Nye County treasurer to place the bond payment into the capital fund, seconded by commissioner Debra Strickland.

With evident concern over that motion, commissioner Leo Blundo jumped in to state, “I don’t think that motion was broad enough… I would like to see that money segregated off into its own (fund) until we confirm not only acceptance, but… there have been some developments that need to be addressed before we even consider spending that money.”

Nye County Commission Chairman John Koenig said one of the problems with such an action is that the county does not have a segregated fund established for that money. Wichman then turned to Nye County Comptroller Savannah Rucker to ask if she would be able to keep the money separate from other capital projects monies.

“Yes, absolutely. In the capital fund, 10401, we are able to separate out dollars and bring forward projects for the board to review and approve, if that is the will of the board,” Rucker replied.

Nye County District Attorney Chris Arabia chimed in to state he believed what Rucker proposed was proper. “And at this point, the decision (today) is only to accept the deposit, as opposed to how it’s going to be spent. That is something my office has been researching… so we will have the questions that have been asked answered soon.”

Public comment included two area developers who have a vested interest in the Ishani Ridge subdivision.

Nye County developer Michael Lach thanked the commission and county for working to get the bond monies pulled, remarking, “This bond has been sitting out there since 2008, 2009 and it’s been kicked down the road for a long time. And I know it’s an anomaly because this board… I don’t believe has ever called a completion bond on a project so it was out of the purview of most of the people who have never done this before.”

Lach went on to state that the “blight” created in the center of town by the unfinished subdivision could be remedied through use of the bond payment to complete the subdivision improvements. He himself owns several dozen lots in Ishani Ridge and building homes on them is something he believes would be a positive for the town and county, bringing in many thousands of dollars in tax revenue once houses are constructed.

Brandon Stavros of Homes by Apollo, who also owns dozens of Ishani Ridge lots, added his thoughts as well.

“We’re very excited to get constructing in there,” Stavros stated. “I’m sure we all know that Ishani Ridge has been in the news over the years and it will be nice to kind of remove this tarnish. We also understand from the owners of the completed houses in there, they are very excited to get everything cleaned up in there, it’s an absolutely mess in there. There is junk strewn about, incomplete roads, uncompleted sewer and that’s what this completion bond was for, to guard against this kind of thing. Our concern is that we want to make sure those funds are used for what they were intended for.”

The motion to direct the treasurer to deposit the bond payment into the capital projects fund passed unanimously.

During the same meeting, some discussion regarding a possible future use of the bond payments also took place, with commissioner Donna Cox bringing the subject to the table under the general road reports agenda item by asking about a rebuild for Wilson Road, which fronts the Ishani Ridge subdivision and is in very poor shape.

“Wilson has been on the capital improvement list for years and years and years,” Nye County Public Works Director Tim Dahl explained. “If you are talking about the section, let’s say, from Highway 160 all the way to Blagg Road, yeah, that’s on the CIP for a future project… There is a significant amount of CIP funding that is allotted for that section of the road, in addition to when Ishani Ridge improves, when we can utilize those funds, that’s also for a portion of that road.”

Cox questioned whether only part of the Ishani Ridge bond funds would be used for Wilson Road, to which Dahl responded, “There’s a couple of different funding mechanisms that I’m talking about there for the improvements to that portion of road. Ishani Ridge, through their development, has in their plan to improve the portion of Wilson Road fronting Ishani Ridge. That’s something that was bonded… a separate funding sources all together from the capital improvement plan, or CIP, impact fees that have been collected from developers.”