A large banner stretched across one corner of Highway 160 and Highway 372 clearly proclaimed the purpose behind the bevy of residents gathered the morning on Nov. 27, all of whom were out to rally against proposed solar farms in Pahrump. (Robin Hebrock/Pahrump Valley Times) 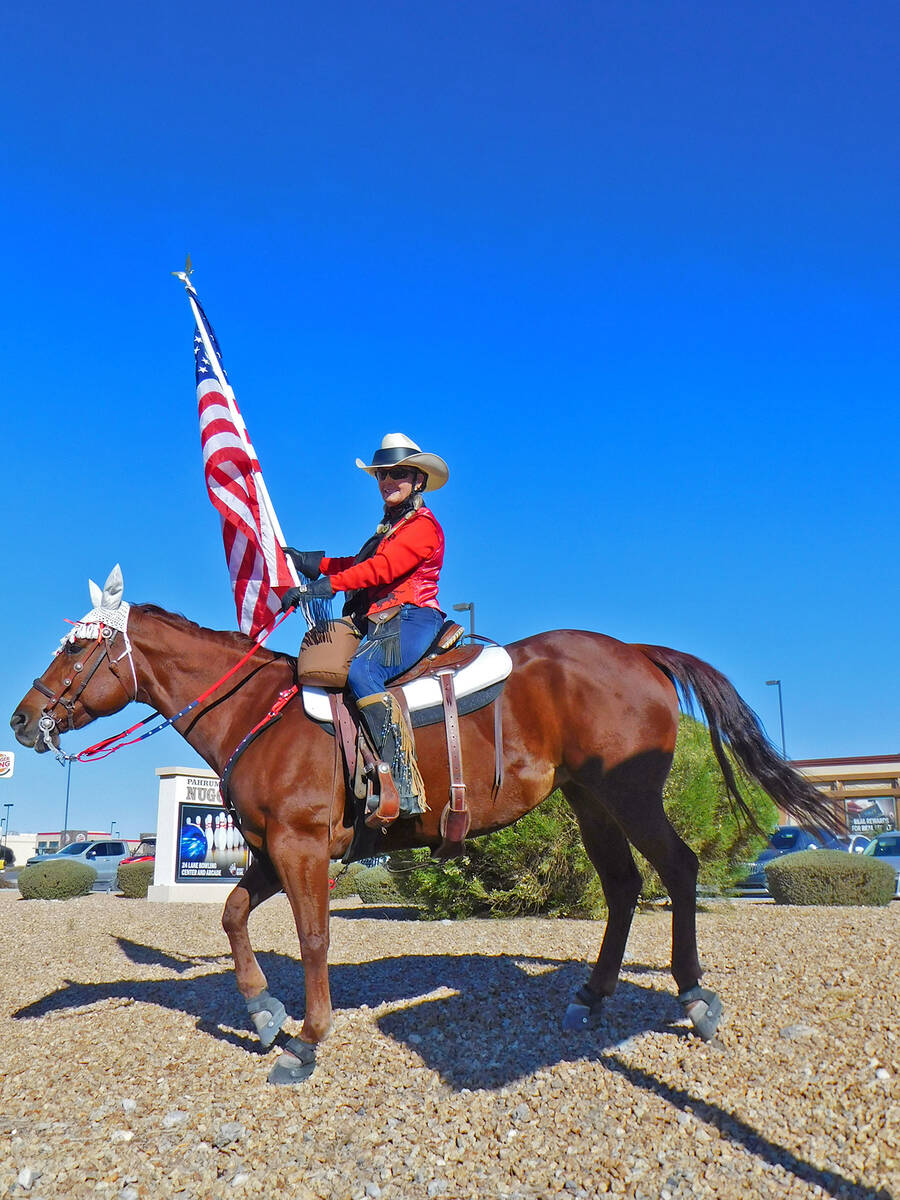 "Chunky Monkey" and his rider were just two of those who took part in the "Save Pahrump Deserts: No solar farms!" rally on Saturday, Nov. 27, 2021. (Robin Hebrock/Pahrump Valley Times)

Nye County commissioners are urging developers of a proposed solar farm, planned for more than 2,000 acres of public desert lands in Pahrump, to investigate alternative sites.

“Nye County actively supports proposals for renewable energy and prefers to be accommodating,” the commission’s letter said in part. “However, the current project as presented to the board in December 2021, has met with considerable opposition from the residents and users of the public lands in this area.”

San Francisco-based Candela Renewables Inc. plans to construct a 500-megawatt solar project along Highway 160 south of Pahrump. The project would convert sunlight into electricity using photo-voltaic technology, but it’s been met with protests from local who have cited environmental and other concerns.

Nevada is pushing to become a leader in renewable energy, and a ranking released this year shows the state tops all others in the U.S. for its “solar economy.”

The state aims to transition to 50 percent renewables by 2030, which accounts for roughly 28 percent of its utility-scale electricity. About 80 percent of the state is public land – much of it maintained by the BLM – and the year-round sunshine, coupled with miles of uninterrupted space make Nevada an attractive destination for solar companies.

But locals and conservationists fear that solar energy projects are not entirely “green.”

They fear construction and maintenance of the massive panels, used to convert sunshine to power, could destroy thousands of miles of untouched land.

The desert’s crust is basically a thin layer of soil that acts like a seal to trap carbon and nutrients underneath the surface. Removing it contributes to powerful dust storms that release particles and carbon into the air. These conditions are especially unhealthy for patients who suffer respiratory conditions.

Animal species that are native to the desert are also at risk, according to opponents of the project.

Last year, a team of biologists moved 139 Mojave desert tortoises, a threatened species, off the site of the 3,000-acre Yellow Pine Solar Project 10 miles south of Pahrump. Thirty of the tortoises were killed, the Pahrump Valley Times reported last summer.

They’re all mounting reasons why Candela Renewables should reconsider the location of its proposed solar farm, according to opponents.

“This board is confident that a little more investigation on the part of this applicant will identify a location for their project that does not interfere with the quiet enjoyment thus far experienced by our residents and recreationalists,” Nye County commissioners wrote in their letter to BLM officials.

Additionally, a growing number of residents in Pahrump say its dwindling water basin simply can’t support the number of projects proposed for the desert town.

Typically, solar power technologies use approximately 20 gallons of water per megawatt hour generated, according to the Solar Energy Industries Association. Most of that water is used for cleaning the reflective surfaces of the panels and other equipment.

While it may seem like a modest amount, the usage adds up and resident Helene Williams told Nye County commissioners on Tuesday that developers and planners must recognize the concerns from private well owners who seek to conserve local resources.

“We have a groundwater basin that cannot take an impact of the multiple projects that are going to be and have been proposed,” Williams said.

While the commission’s letter to BLM officials on Tuesday failed to acknowledge these water concerns, officials said they would express them in subsequent letters to state engineers, developers and other stakeholders in the project.