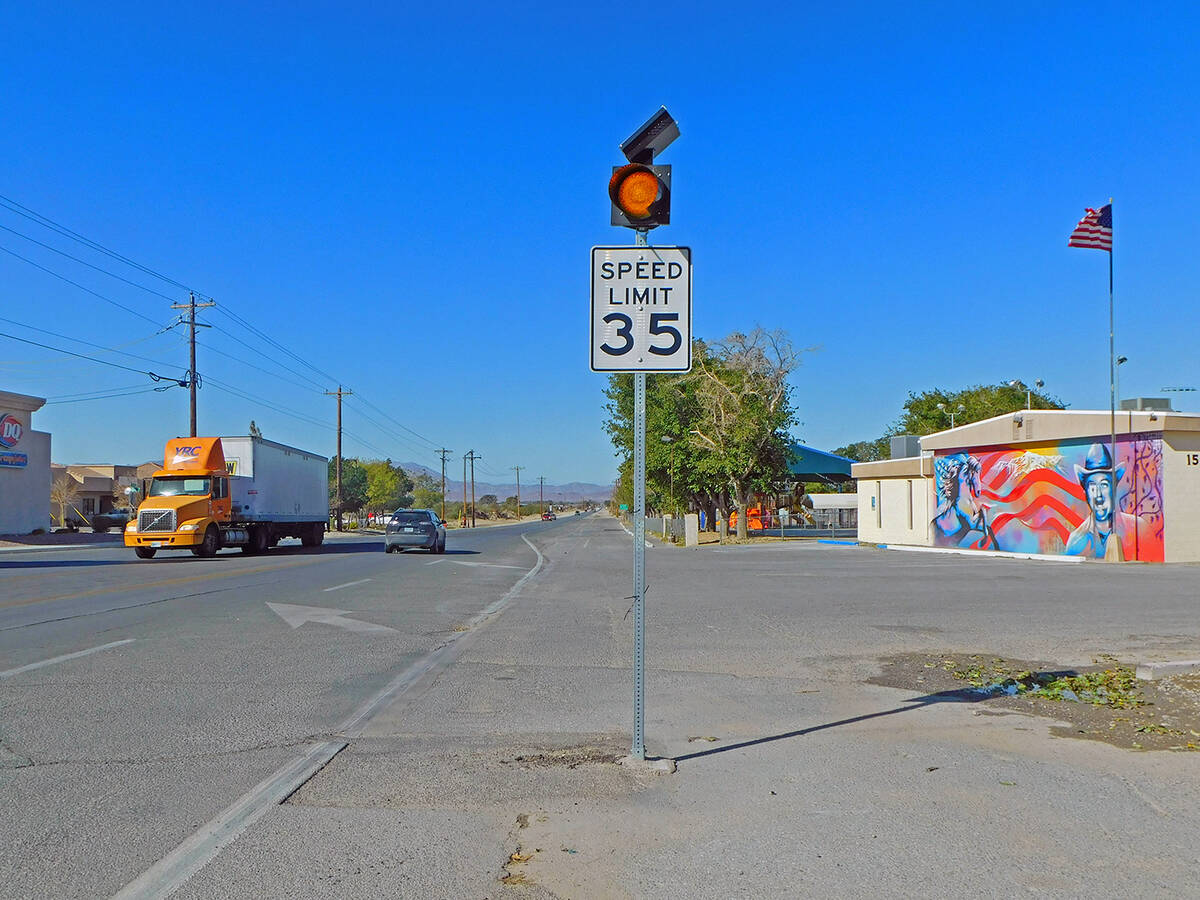 Robin Hebrock/Pahrump Valley Times The speed limit in front of Petrack Park and the Bob Ruud Community Center has officially been increased from 25 to 35 miles per hour. 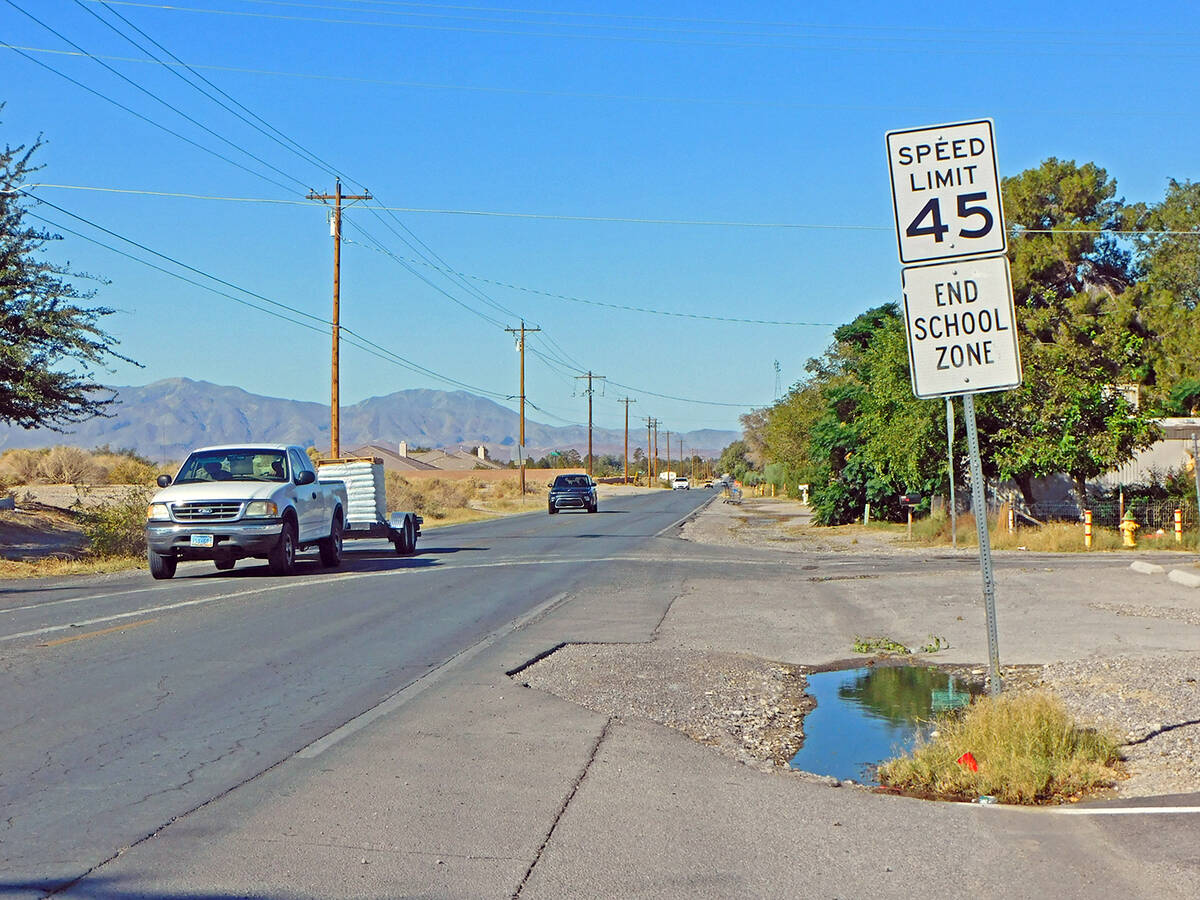 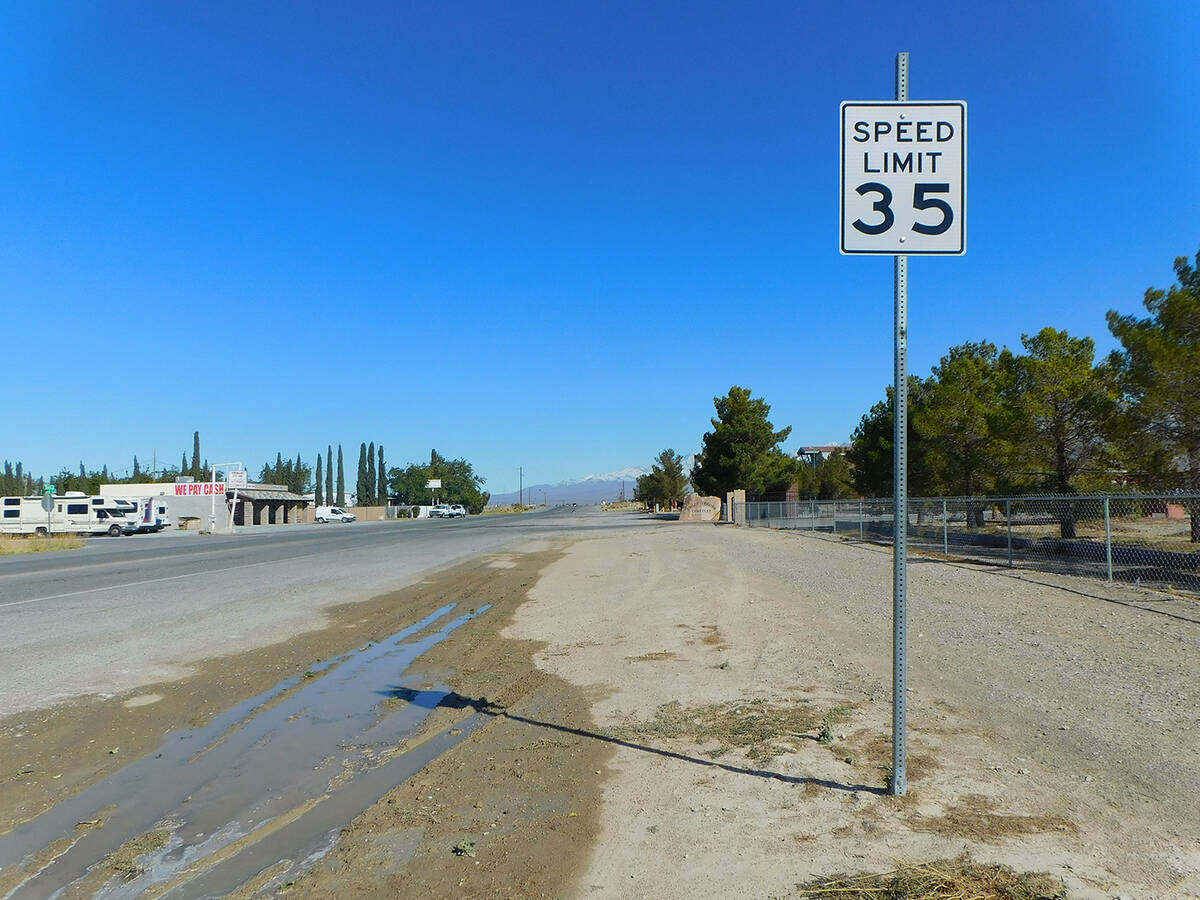 Several streets in the Pahrump Valley will be seeing faster traffic following approval by the Nye County Commission of speed limit increases effecting roadways located in the center of town.

On Tuesday, Oct. 5, the commission addressed code changes to Pahrump Town Ordinance No. 70, which sets the rules of the road for motorists traveling in the valley. Targeted by the code changes were eight roads in total, including Wilson Road from Highway 160 to Blagg Road, Basin Avenue from Highway 160 to the western edge of the McCullough Arena and all of West, East, First, Second, Third and Fourth streets.

Blundo opened the discussion on Oct. 5 by remarking that he had noticed the inconsistencies between the ordinance and the actual speed limit signs before turning to commissioner Donna Cox to ask if she felt the speed limit on East, West, First, Second, Third and Fourth streets, which are in the middle of Cox’s commission district, should be at 25 or 35 miles per hour.

“I agree with you, 35 is fine,” Blundo remarked. “I look at it this way, whenever I have been down there, I think I average probably 35 because 45 is too fast.”

As to Wilson Road from Highway 160 to Blagg Road, Blundo said he had thought this was already a 45-mile-per-hour street and he felt that would be the best speed limit to impose on drivers. He made the motion to adjust the ordinance to stipulate that Wilson Road would be 45 miles per hour all the way from the highway to Blagg Road, with the exception of in front of the Community Christian Academy where the speed limit is 15 miles per hour, per the ordinance’s section regarding school zones.

For East, West, First, Second, Third and Fourth streets, he motioned for those speed limits to be set at 35 miles per hour. Basin Avenue from Highway 160 to the edge of the arena grounds, which fronts both the Bob Ruud Community Center and Petrack Park, saw changes too, with Blundo motioning for this stretch of road to have a speed limit of 35 miles per hour.

Before the motion came to a vote, Blundo also took a moment to emphasize that Basin Avenue from the west boundary of the arena to Blagg Road was to remain at 45 miles per hour, a fact that he wanted clear on the record so that there would be no confusion.

Commissioner Frank Carbone provided a second and the motion passed with all in favor.

Following the vote, Nye County Sheriff Sharon Wehrly stepped forward to speak on the item, having missed the initial public hearing public comment period. She stated that she had some concerns about the increases the board was approving, noting that on the streets that intersect with Bolling Road, specifically, there are children that often play in the roadway and perhaps a lower speed limit would be appropriate.

She also said she felt 25 miles per hour was an appropriate speed limit for in front of the community center and Petrack Park, but to no avail.

“Unfortunately we have done our deal and let’s see what we end up with,” Strickland had replied to Wehrly’s comments.

The speed limit signs that were to be changed due to the adoption of the ordinance amendments have already been swapped out, with Nye County Public Works Director Tim Dahl telling the Pahrump Valley Times that all of the signage for the various roads addressed by the action on Oct. 5 were switched and the new signs reflecting the higher speed limits installed in their place as of yesterday, Tuesday, Oct. 12.