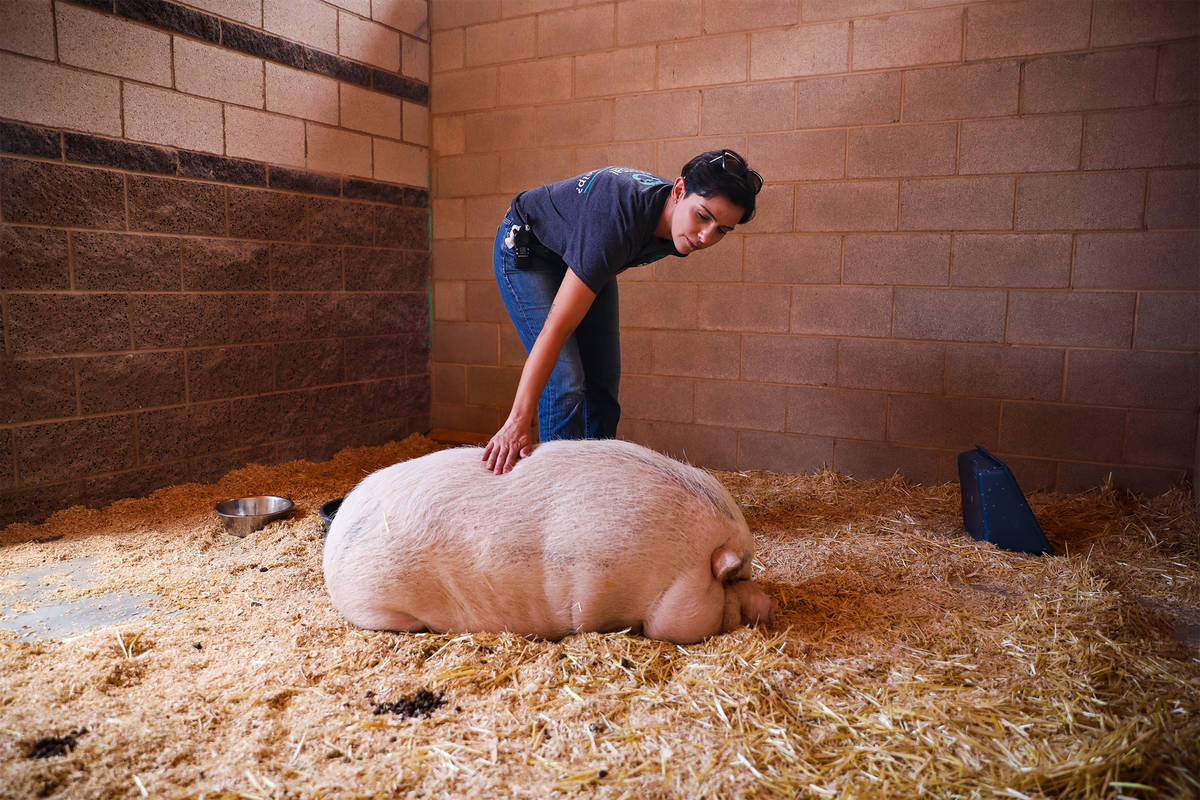 Lisa Watson, an animal care supervisor, pets Cupcake, a pot bellied pig that was abandoned and is up for adoption, at the Animal Foundation, Thursday, June 24, 2021 in Las Vegas. She was found June 2 in a dog kennel, where caretakers believe she had been stuck living in, leading her to be morbidly obese. (Rachel Aston/Las Vegas Review-Journal) @rookie__rae 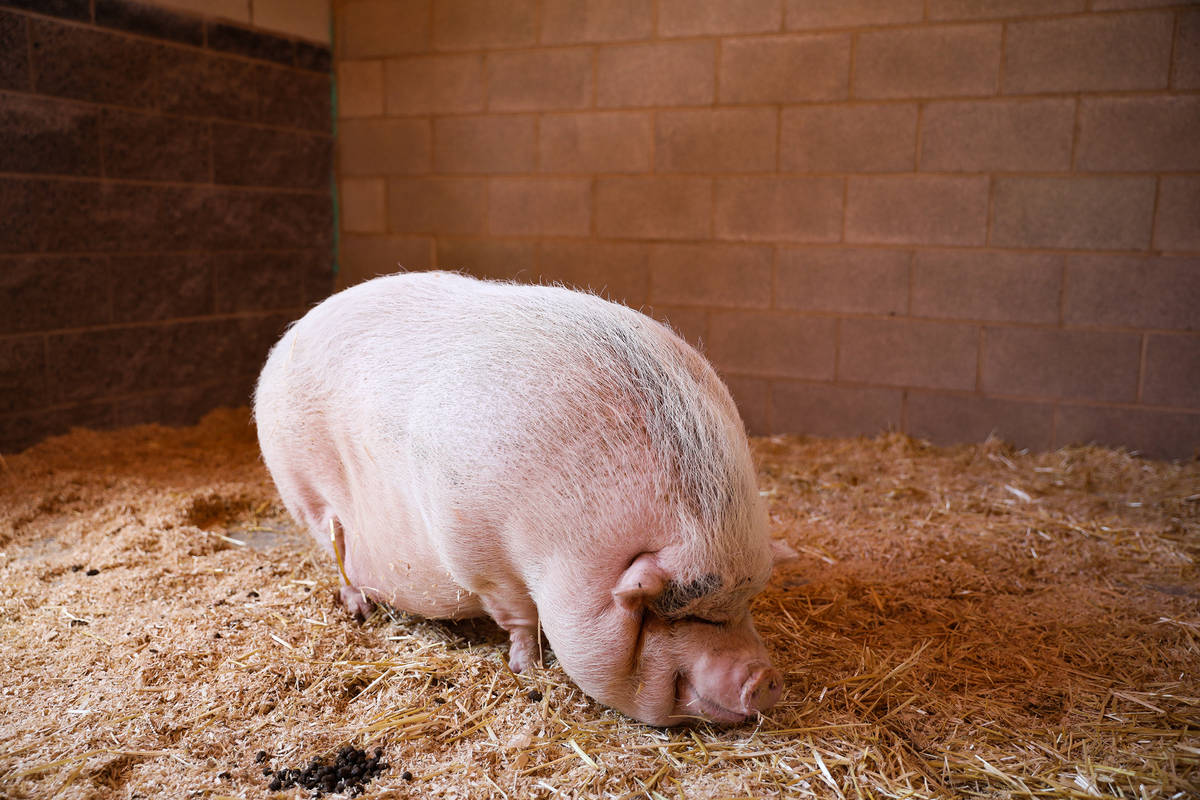 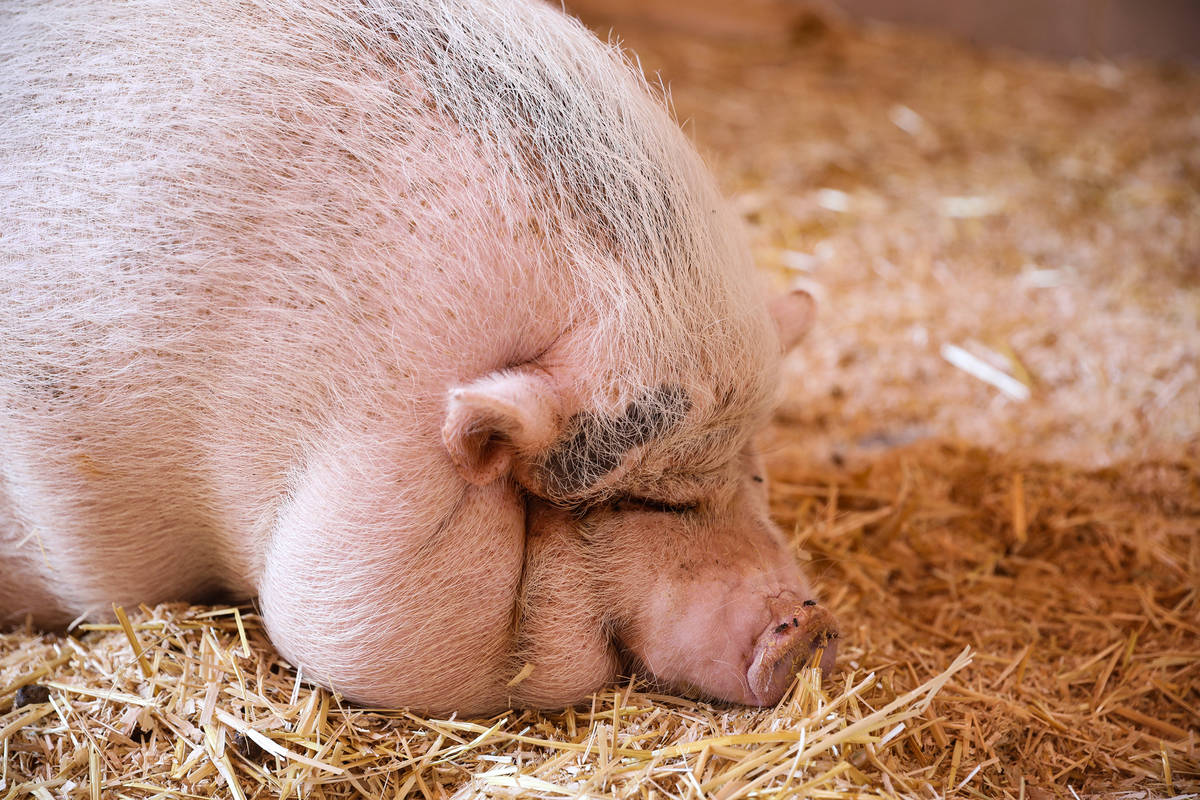 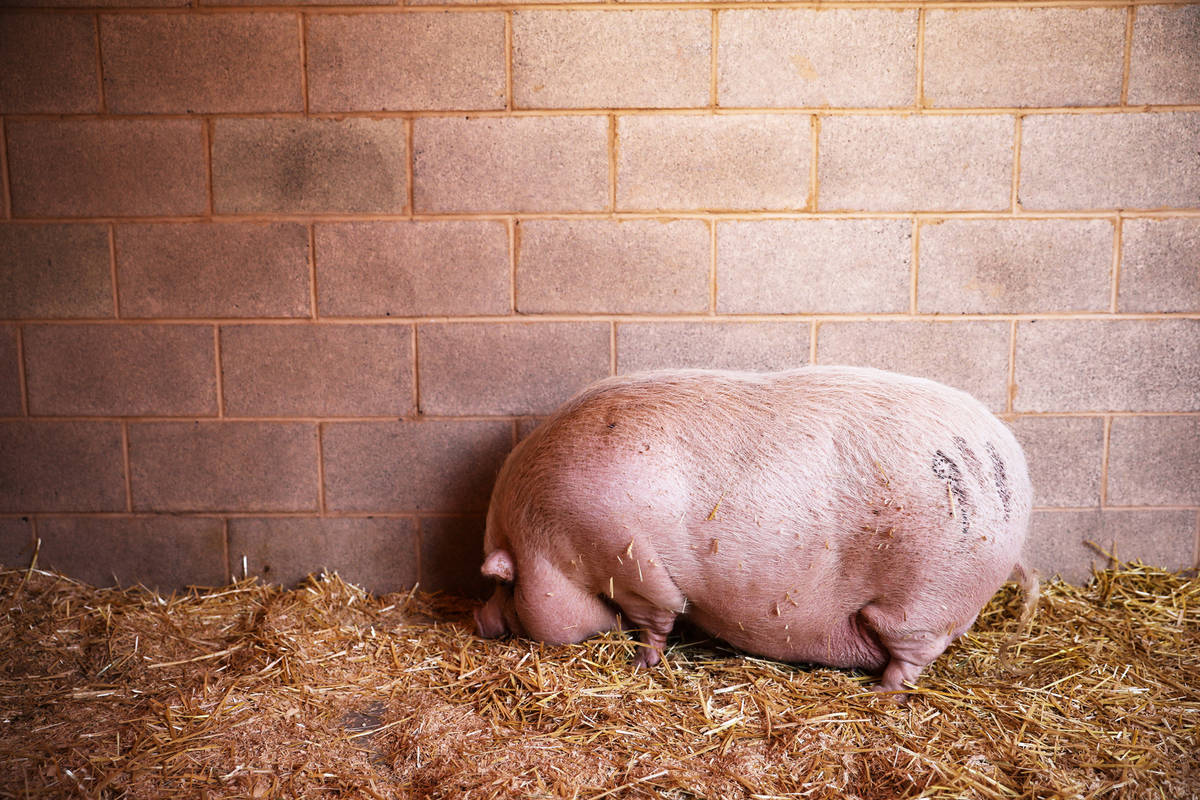 A severely overweight potbellied pig is recovering at the Animal Foundation after being abandoned in a cage outside a Las Vegas home.

The female pig, which rescuers named Cupcake, was found June 2 in a wire dog kennel by a resident on the sidewalk outside his home, near East Hacienda Avenue and South Nellis Boulevard.

The approximately 3-year-old pig was taken to the Animal Foundation, where her weight — 175 pounds, rather than the 140 to 150 pounds that would be normal for a pig of her size — immediately raised concerns. Cupcake is extremely obese and struggles to move, said Tasha Crabtree, a licensed veterinarian technician at the foundation.

She also had overgrown hooves and dirty ears.

Veterinarians sedated Cupcake to trim her hooves, clean her eyes and ears and perform several exams. Since then, the pig has been recovering in a large enclosure where she is fed a balanced diet and regularly monitored. Staff still have concerns about arthritis in Cupcake’s back legs, stemming from the obesity, but expect mobility to increase as she loses weight.

Lone Mountain Animal Hospital veterinarian Taylor Parker, who donated her time to help Cupcake, said she sees many obese pigs in her practice because of improper feeding. Pig owners will sometimes use dog food, which has an overly high protein content and can cause excessive weight gain. Parker also said that it can take months for pigs to lose weight because the animals store fat well.

“Feeding them table scraps, dog food and people food is how you slowly kill your pet pig because they can’t get up, can’t move, get arthritis and they’re miserable,” Taylor said. “Pigs are big, but they’re also supposed to be able to move.”

Crabtree added that many pig owners end up with a much larger pet than expected after being told they were buying or adopting a miniature or “teacup” pig. Crabtree said those pigs are simply babies that will grow to full size. In captivity, pigs average a life expectancy of 15 to 18 years, she said.

“There’s really no such thing as a teacup or mini pig, so if you’re not willing to take on a 90 to 150-pound animal in your house, then you probably shouldn’t get that pig,” Crabtree advised.

As for Cupcake, a partner of the Animal Foundation will pick her up Saturday and provide ongoing medical care during her weight loss journey. Long-term plans for the animal are still being determined, but the hope is that she will be put up for adoption.

The Animal Foundation helps about 25,000 animals per year.