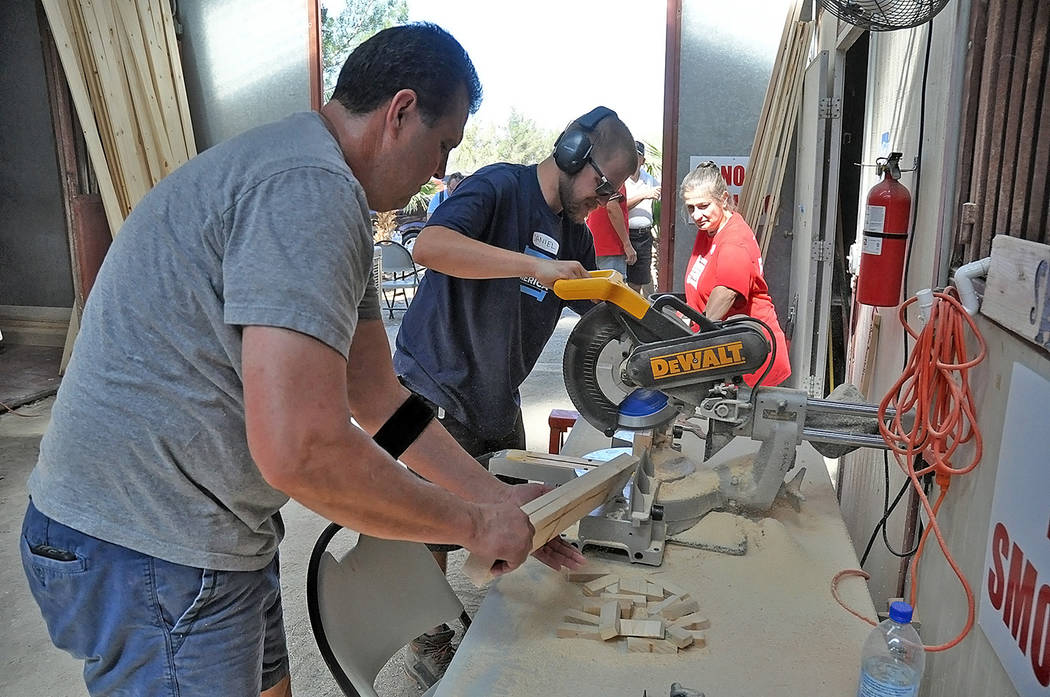 Horace Langford Jr./Pahrump Valley Times - The buzz of power tools filled the air as volunteers worked to build new beds for area youth who do not have beds of their own to sleep in at night. 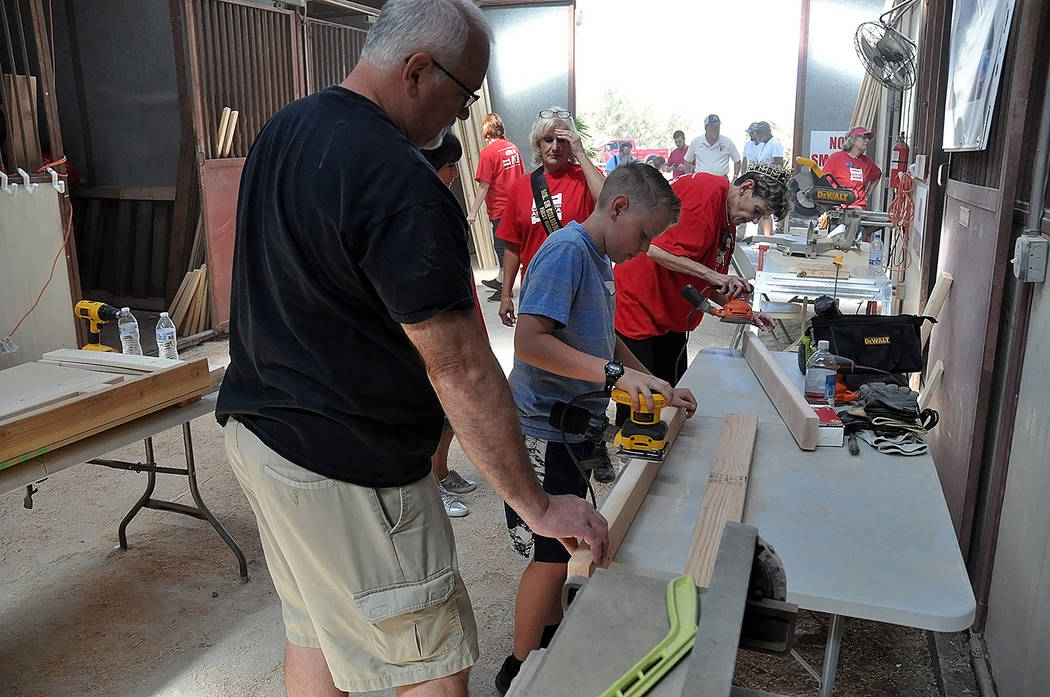 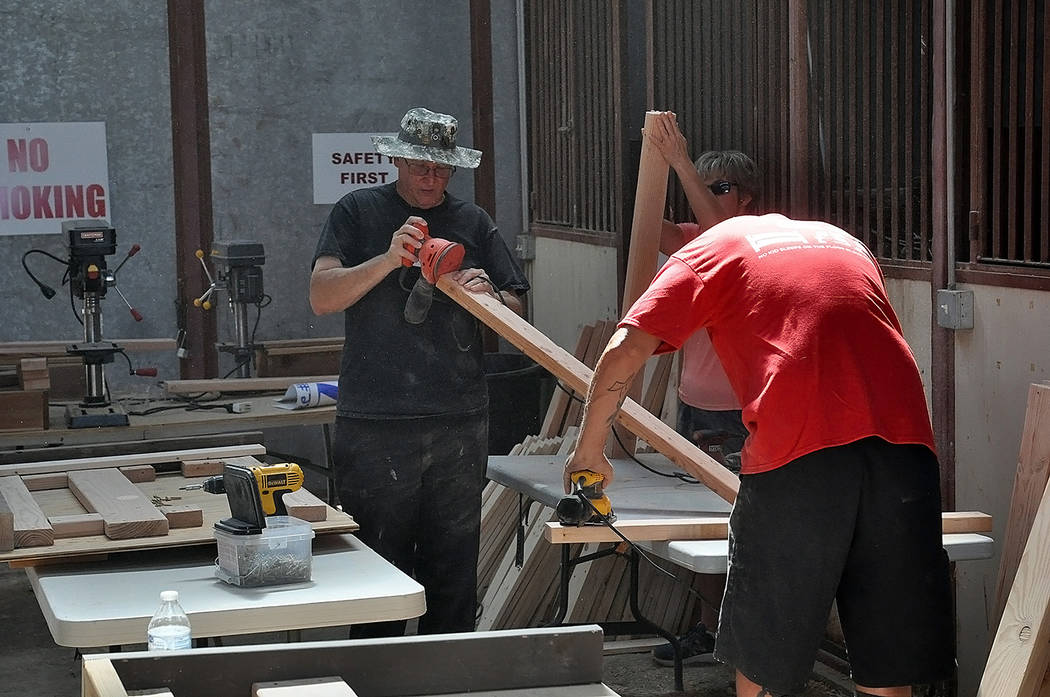 Horace Langford Jr./Pahrump Valley Times - Volunteers are pictured sanding lengths of board that were destined to become part of the new beds being constructed during the Bunks Across America bed build. 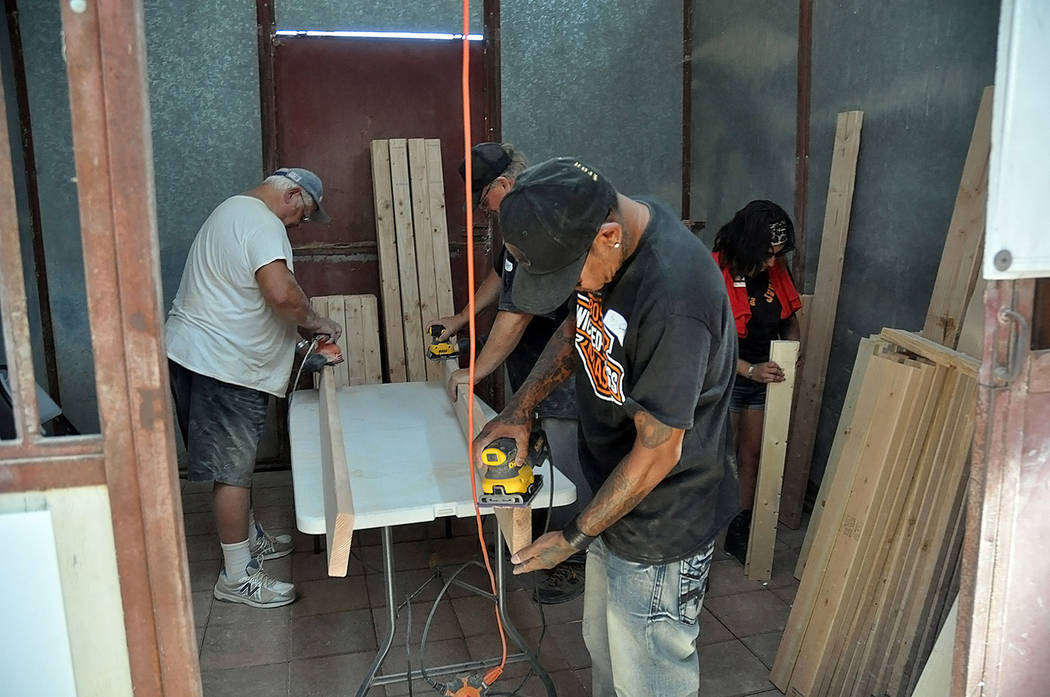 Horace Langford Jr./Pahrump Valley Times - The Sleep in Heavenly Peace Bunks Across America bed building endeavor was a big success in Pahrump with dozens of volunteers manning the various stations of the assembly line.

Sleep in Heavenly Peace hosted its nationwide Bunks Across America event on Saturday, June 15 and the Nye County chapter spent the day constructing new bunk beds for children who don’t have beds of their own.

A massive force of volunteers turned out for the event, lending a hand to build a total of 20 new bunk beds, complete with linens. The beds are destined for the homes of valley youth, all in support of Sleep in Heavenly Peace’s mission to make certain that no child needs to sleep on the floor.

“Things went even better than I had hoped,” Nye County chapter president Gary Bennett said with obvious delight following the bed build event. “I was hoping for about 50 volunteers and it was closer to 100, I think the total count was about 80. Many of the people who showed up also brought bedding, which we were short on so that really helped.”

Bennett said the building itself went fairly smoothly, with just a few hiccups along the way. The only major hitch, Bennett said, was the breaker box blowing due to the amount of equipment that was running at one time but the group of volunteers made it work regardless.

“We had 15 sanders, two saws, three drill presses, six 20-inch fans, a swamp cooler, a bunch of lights, an air compressor, so it was an adventure but we got through it!” Bennett stated.

The heat was also a bit of a challenge but it was definitely assuaged by a generous donation, Bennett detailed. “We were in a barn that doesn’t have air conditioning but the day before the event, somebody donated a swamp cooler. Celeste Sandoval at the county planning department, she and her husband had a swamp cooler that they weren’t using. It’s used but it functions really well. So between the fans and that, it was tolerable.”

Leah-Ann DeAnda, Bennett explained, was a major part of the bed build as well, taking on the task of lead carpenter. “We met because we were both sitting on the planning commission and she is my right-hand person,” Bennett said. “She does a great job, she’s a finish carpenter by trade so she knows how to do all this stuff.”

By the end of the day on Saturday, June 15, the group of volunteers had constructed a total of 20 new bunks beds and Bennett was more than pleased with the results.

Summer weather is making its presence known now, however, and the organization may slow down or even halt operations for a short period of time to await the arrival of milder weather. In the meantime, Bennett said the organization will continue to collect and stockpile as much in donations as it possibly can in preparation for ramping up production in cooler months.

“We’re getting donations, but we can always use more!” Bennett stated, noting one major donation of $1,700 from CoreCivic. “And it would be very helpful if some of the larger businesses here in town would get involved and make some contributions too. Anything helps, anything at all.

“There are hundreds of kids right here in this valley that are not in their own bed. To me, in this day and age and in this country, that’s just not right,” Bennett continued, remarking that everyone should be pitching in to try to help. “That would be my dream, that the whole community would get involved somehow. Whether it’s with a package of twin-size sheets or a donation of $5 or anything they can contribute. If we all come together, think of how many lives we can positively impact.”

In conclusion, Bennett said with profound gratitude, “God bless everybody for being there and helping get this done.”

For more information on the national organization visit www.shpbeds.org