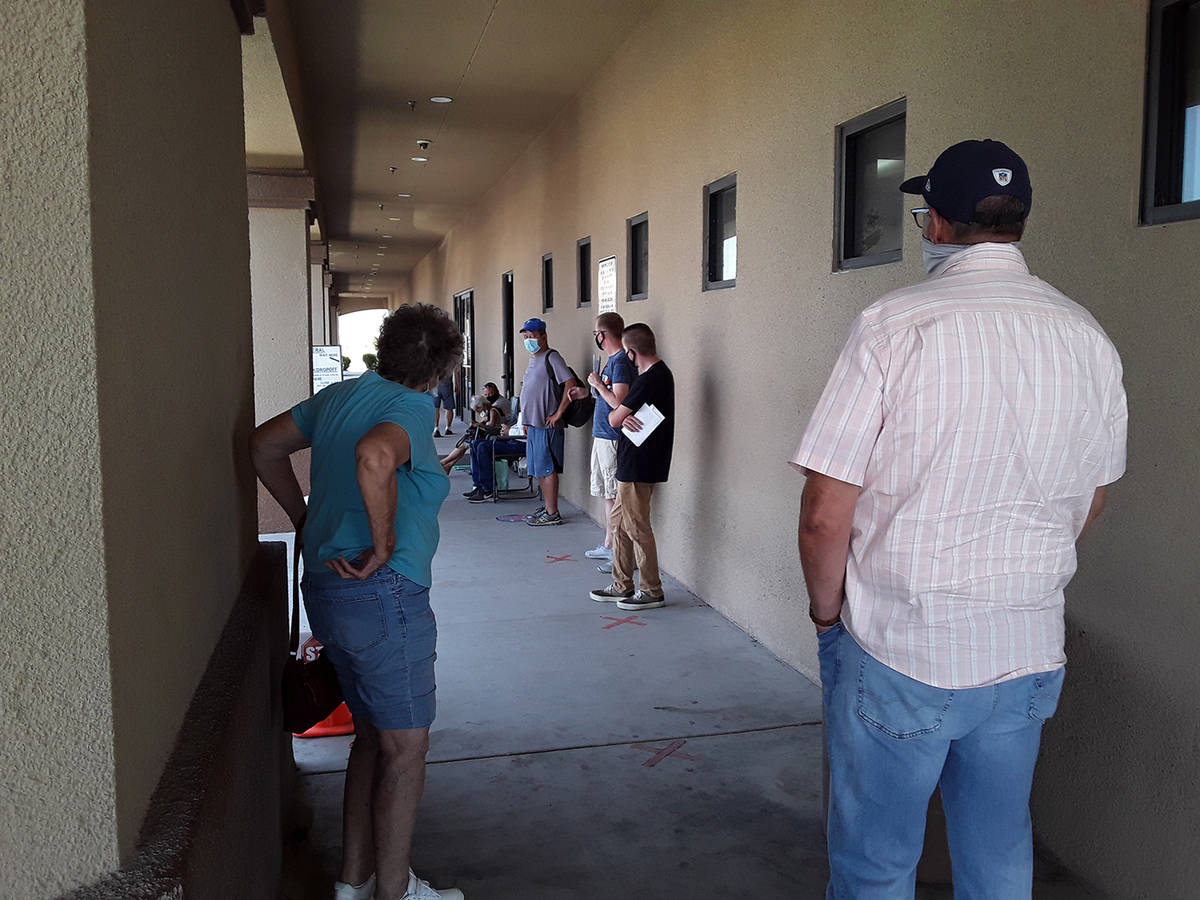 Selwyn Harris/Pahrump Valley Times Many Pahrump DMV customers are decrying the long wait times in order to get a transaction completed in the wake of the COVID-19 outbreak. 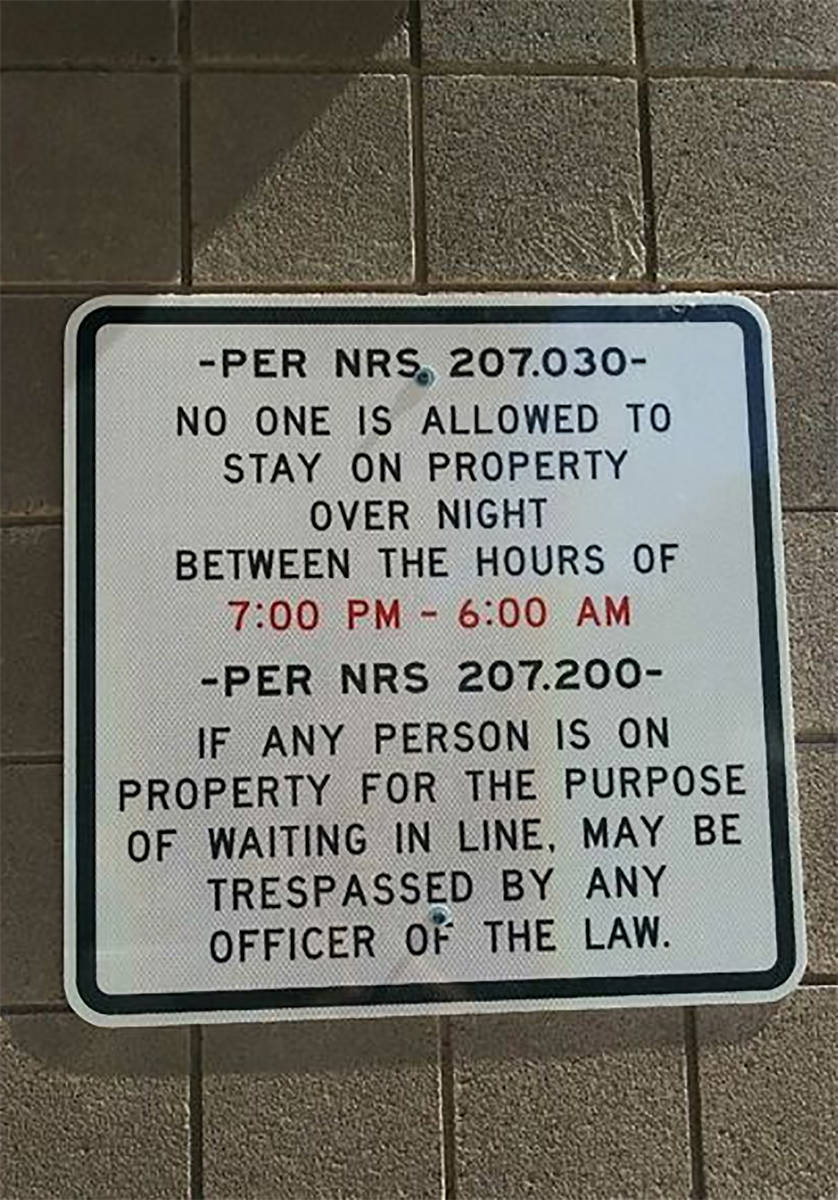 Special to the Pahrump Valley Times At the request of DMV officials, the Nye County Sheriff's Office posted no trespassing signs on the building in an effort to keep individuals off of the property during the overnight hours.

Aside from taking along important documents you’ll need in order to perform a DMV transaction in Pahrump, those who have already endured the experience as of late, suggest you may want to bring along some “patience” as well.

Due to the COVID-19 outbreak, many area residents are expressing their frustrations with what they consider utter disorganization and confusion at the 1780 East Basin Ave. location.

Pahrump resident Fred Dexter was one such patron who visited the office with an acquaintance, on a Friday earlier this month.

“I was there to help a friend of mine to register her truck,” Dexter said. “She went and stood for many hours, and at 5 o’clock, they closed the door with eight people left outside. She came back on Monday at 6:30 in the morning, and I showed up at about 9:30 in the morning to see if she had all of the paperwork right. I decided that I would stay and make sure the paperwork was okay. We finally got out at 2 o’clock in the afternoon on Monday. The line was moving just excruciatingly slow, and from what I understand, the wait was so long because very frequently there’s only two or three employees working in there.”

In addition to helping his friend at the office, Dexter also needed to make a transaction himself.

“I had to register a motorcycle, so we went in together,” he said. “We were faulted because the teller told us technically they are only allowed to let one person in per transaction at a time. We didn’t know that because we both walked in together. There was a difficulty with my paperwork for the motorcycle, so it did not get registered. It was not anybody’s fault except mine probably, but my friend was able to register her Ford truck. I saw three clerks in there when I was inside.”

The DMV was contacted for this story.

On Monday, Aug. 24, Echo Gendreau, a new resident of Pahrump, needed to take care of some business at the DMV, while noting it was her second trip to the office with her family in tow.

“I’m just trying to get our vehicle registered,” she said. “We got a new car, so I just have to get it switched over, but because it’s out of state, I have to come to the office. The first time I came here, it was around 7:30 in the morning and I was on the back side of the building. I waited about an hour and a half before someone said that I just needed a piece of paper, and I was done for the day. Right now I have my husband and baby in the car. Today I’ve been waiting here for 20 minutes and the line has not moved at all. It’s just one of those things. We have lived in Pahrump since March, after moving from Las Vegas.”

Directly in front of Gendreau was five-year Pahrump resident David McCarty, who provided his thoughts on the situation.

“This is my first attempt at trying to get something done here at the DMV,” he noted. “I need to renew my CDL license, and this is the first time I’ve come since the COVID-19 situation. So far, it’s not the best and I hear there’s only two people working inside. Right now I’m waiting to get a number.”

New signage was posted at the DMV office in Pahrump recently, indicating when patrons were allowed on the property. The Nye County Sheriff’s Office is now enforcing the DMV’s directive that no one is allowed on the property between the hours of 7 p.m. and 6 a.m., as some individuals arrive several hours before the office opens in the morning.

“Many people have been lining up at the DMV for service as early as 2 a.m., the sheriff’s office stated in a Facebook post. “The DMV has officially issued a directive advising that no one is authorized on DMV property from 7 p.m. to 6 a.m. and has requested sheriff’s office staff to do extra patrol and treat all individuals found in violation as trespassers. Please ensure you do not go to the DMV between the hours of 7 p.m. to 6 a.m. Thanks for your cooperation.”

“The citizens of the state are doing the right thing,” he said. “They are required by law, to have a driver’s license and vehicle registration, if that’s what they are there for. The Department of Motor Vehicles is making it almost impossible for many people to get those documents, because their hours of operation appear to be a very strict 8 a.m. to 5 p.m. with no extended hours or Saturdays. When we were there, the line of people extended all the way down the side of the building, around the corner, and back toward where you get your vehicles inspected. We tried to register her truck online, but because the registration had lapsed, we turned in the plates, but it was over a year, so they wouldn’t allow us to register online. We had to be there in person.”