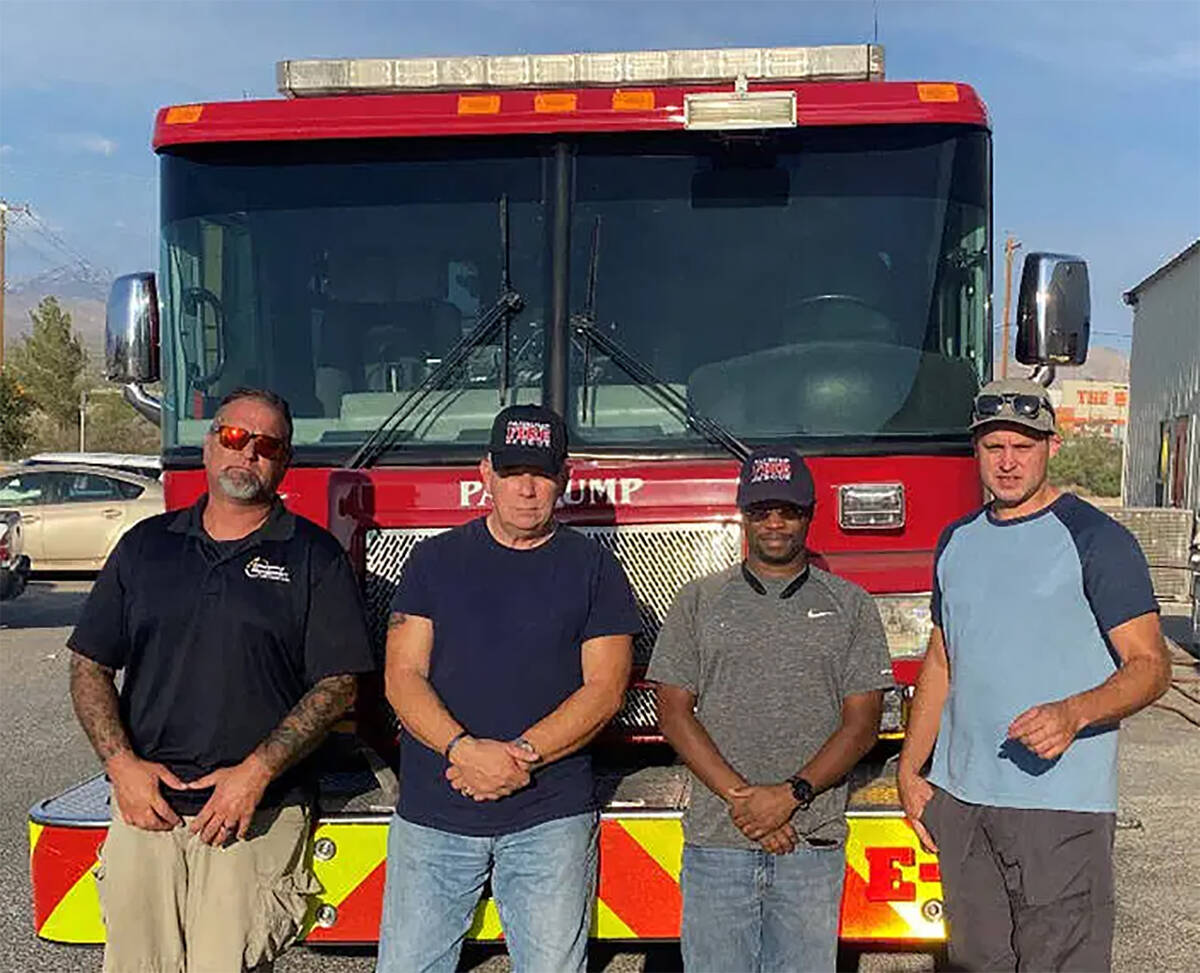 Special to the Pahrump Valley Times The team of four Pahrump Valley Fire and Rescue Services members was mobilized this month for a 14-day deployment to help support the Caldor wildfire in the South Lake Tahoe region. The crew recently returned back home safe and sound, according to Fire Chief Scott Lewis.

Pahrump Fire Chief Scott Lewis said a team of four was mobilized this month for a 14-day deployment.

The crew consisted of a member of Nye County Emergency Management, a Pahrump volunteer firefighter, along with a firefighter/paramedic and a Pahrump firefighter advanced emergency medical technician.

Lewis noted that the action came about by way of what’s known as an Emergency Management Assistance Compact (EMAC).

“It’s an interstate system for requesting mutual aid,” he said. “Pahrump Valley Fire and Rescue was asked to send resources to the Caldor Fire, and the primary objective was to backfill empty stations to assure the continuity of service in that particular area, while their primary crews were out fighting the wildland fire.”

Lewis also noted that the action involved creating a Southern Nevada Strike Team, which are all similar resources consisting of Type-1 Engines.

“We sent our Engine-1 with a crew that consisted of members of the Department of Emergency Management, volunteers and career staff,” he said. “They all went up together as a collective team and they were assigned to the Incline Village Station 11, and they handled the responses out of that station until they were released later. They have since returned and everybody is safe.”

Notably, Lewis said the crews felt a sense of great pride by assisting in the wildland fire suppression which, according to the Caldor Fire Incident Information System, was 68 percent contained as of Tuesday afternoon Sept. 14, but has burned more than 219,000 acres and destroyed 782 homes.

Additionally, Lewis said fire crews in the region are still experiencing catastrophic conditions as well as the potential for even further extension of the fire.

“Fortunately, they are making good progress on the Nevada side, but the California side obviously still has its challenges, and of course, everybody’s watching the Caldor Fire very, very closely,” he noted. “Recently some favorable conditions have improved for their ability to contain that fire and we hope that continues, however, there are additional fires breaking out throughout California and if that continues to happen, we stand ready to assist further.”

The Caldor Fire Incident Information System noted that 3,771 personnel are actively battling the fire which has also damaged 81 structures and caused injuries to one first responder and two civilians.