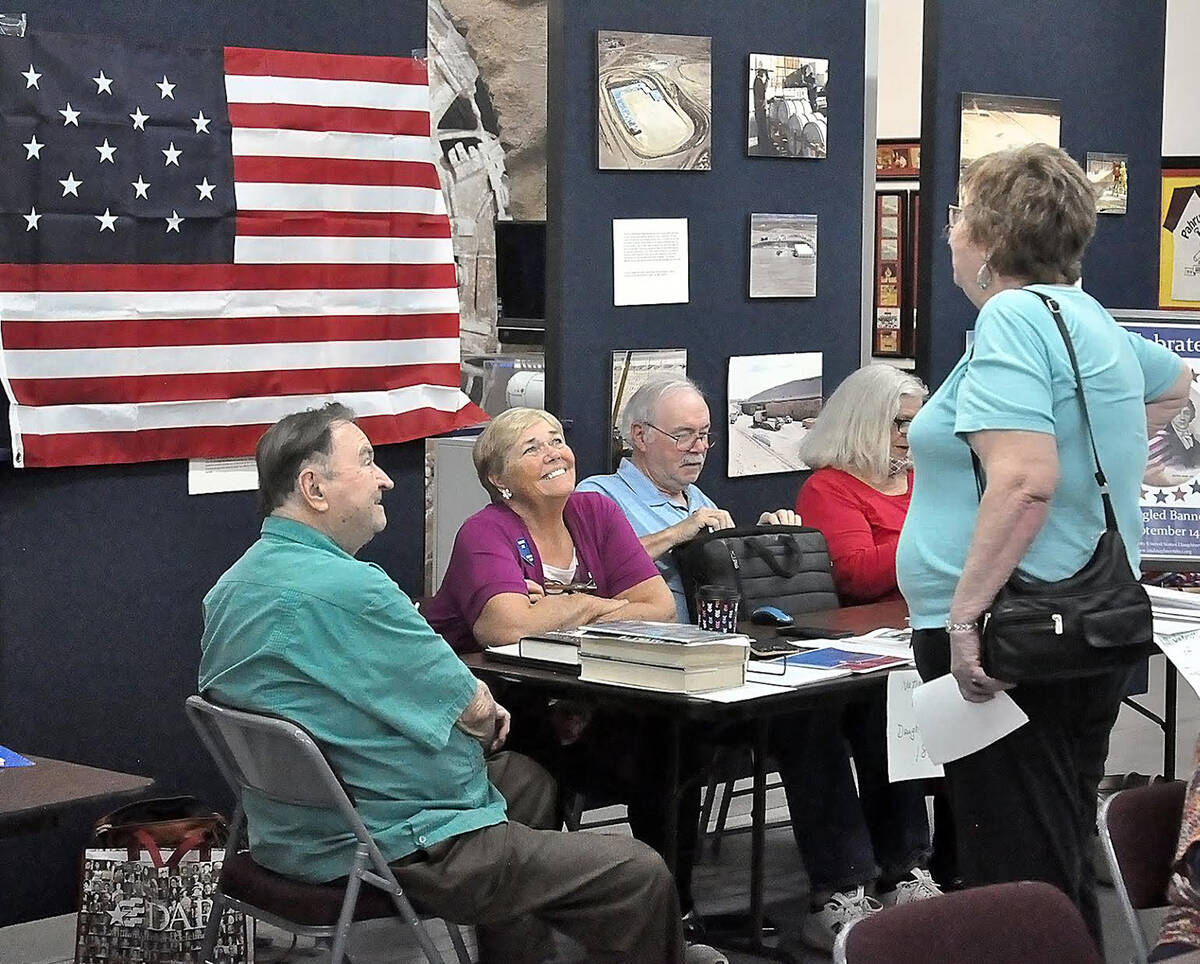 Horace Langford Jr./Pahrump Valley Times The Pahrump Nevada Genealogical Society hosted its inaugural ancestry look-up event this month, with a variety of other organizations joining in for a day of discourse on all things family history. 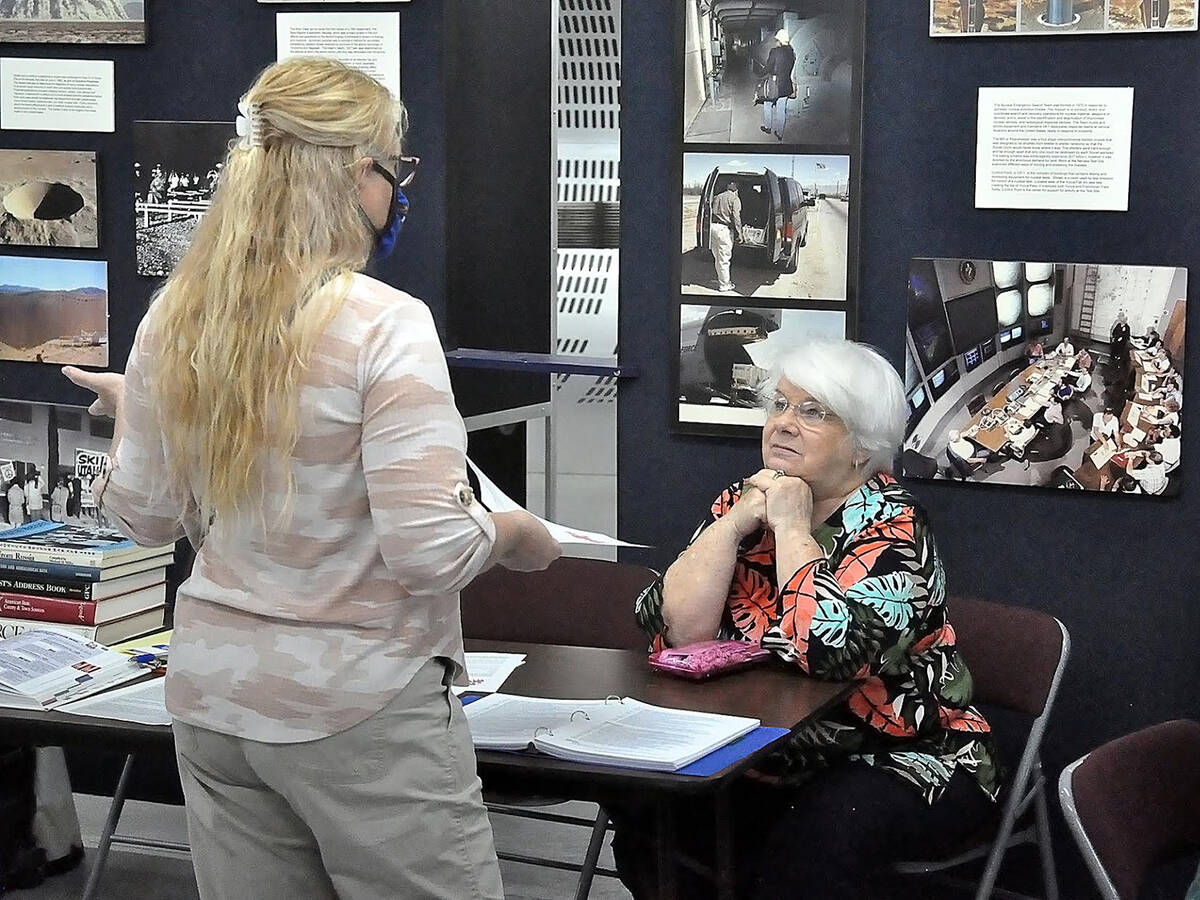 Horace Langford Jr./Pahrump Valley Times Information about the various organizations that were on hand at the Pahrump Nevada Genealogical Society's ancestry event was handed out and several members picked up membership applications as well. 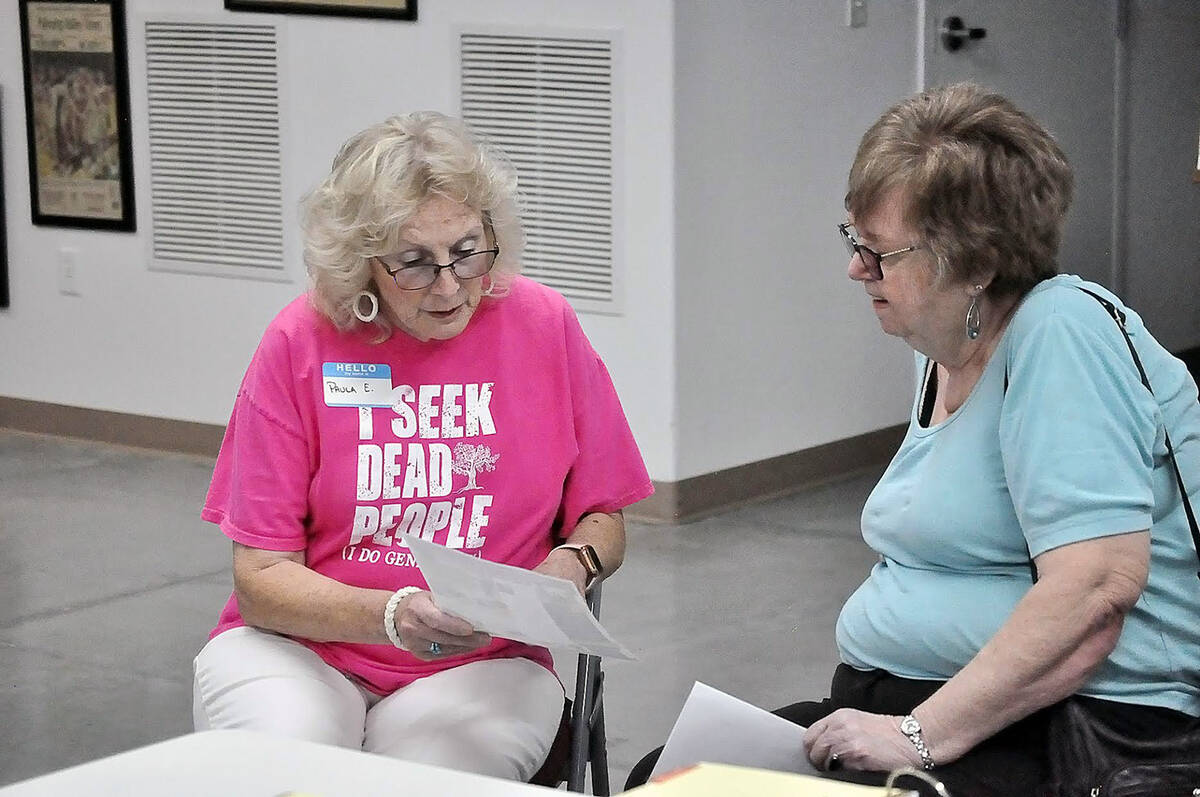 “Who do you think your relatives were?”

It was a question emblazoned across the flyer for the Pahrump Nevada Genealogical Society’s inaugural ancestry lookup event and one that undoubtedly piqued the interest of dozens of area residents.

Were their relatives pioneers? Business magnates in their time? Inventors, politicians, doctors, farmers? When exactly had their family made its way to America and what were the circumstances of their immigration? Were they fleeing persecution and danger, or simply seeking new horizons and abundant adventure?

These are the kinds of questions that many ask themselves, but with little belief that they will ever find out. However, it is the precise mission of the Pahrump Nevada Genealogical Society to foster these types of queries and find methods of tracking down names, dates, paperwork and documentation that can put family lore firmly into the land of fact.

In order to help raise awareness about its own purpose as well as the purpose of a variety of other groups dedicated to some form of ancestry, the Pahrump Nevada Genealogical Society, acronymized as PNGS, hosted its ancestry lookup event Saturday, Nov. 6, the first community gathering that the organization has hosted in its 26-year history.

It was an event that caught the attention of several dozen area residents who headed out to the Pahrump Valley Museum that Saturday, taking advantage of the invitation extended by the society to see what they could uncover about their own families. Over a period of five hours from 10 a.m. until 3 p.m., attendees filtered in and out of the museum, stopping at the various tables set up around the venue for each of the groups represented at the event and utilizing the assistance of those well-versed in ancestry lookups to discover or confirm facts about their relatives.

All in all, event organizers said they were pleased with the turnout of the PNGS’s first public event and were looking forward to making it a tradition in years to come.

“Over the course of the day, I believe I talked to about 30 people,” PNGS President Paula Elefante told the Pahrump Valley Times following the event, adding that it was successful in bring additional membership to the group as well. “The PNGS received three membership applications and several people took applications home with them. They are planning on coming to the meeting on the 17th.”

Drawing in new members was one of the things that Elefante and her fellow PNGS members had truly hoped to see as a result of the ancestry look-up event and with word-of-mouth spreading after it was said and done, the group could see even more potential members jumping at the chance to get involved.

But it wasn’t just the PNGS that was hoping to see a boost in membership because of the event, with several other organizations taking part as well. These included the Daughters of the American Revolution, Daughters of Utah Pioneers, Ladies of the Grand Army of the Republic, the War of 1812 society and the Family History Center located right here in the valley. In fact, the event was a success for these groups as well.

Elefante said that Sue Zink, who was manning the table for the War of 1812 society and the Indian Wars, reported that eight people applied for membership with the War of 1812 group and another seven wished to join the Indian Wars group. In addition, there were at least a couple of gentlemen at the event who expressed interest in becoming members of the Sons of the American Revolution, a lesser known but certainly as valuable branch of the Daughters of the American Revolution.

Overall, Elefante said the feedback she received from those who came out on Nov. 6 was very positive, with many people remarking that it gave them the opportunity to become familiar with groups that they weren’t even aware were present in the area.

“Some people said they did not know that there is a genealogical organization in Pahrump and were excited to come out and learn more about the groups that were at our event,” Elefante said, concluding, “The PNGS would like to thank Rose Humbert and Gerri Richey for chairing this event.”

The PNGS is always looking to add members to its ranks and those interested in joining are encouraged to stop by one of the group’s monthly meetings.

The PNGS meets the third Wednesday of each month, January through November. Meetings begin at 2 p.m. at the Pahrump Valley Museum, 401 Basin Ave.

“We start out with a brief meeting and then move into a program. Occasionally, a member will share how they organize their research or a member will share research tips. Next year we are hoping to have a couple of speakers on various topics, such as Fold 3 and National Archives,” Elefante detailed.