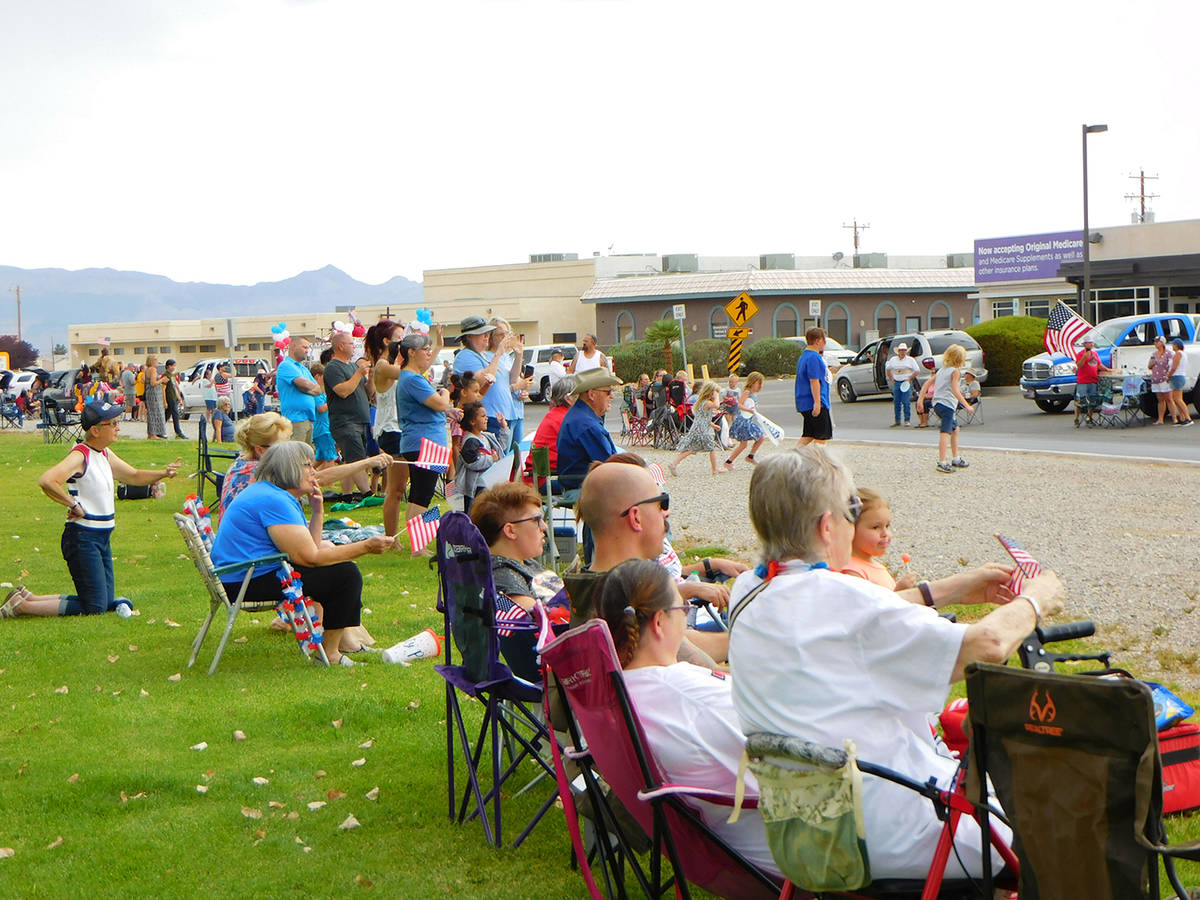 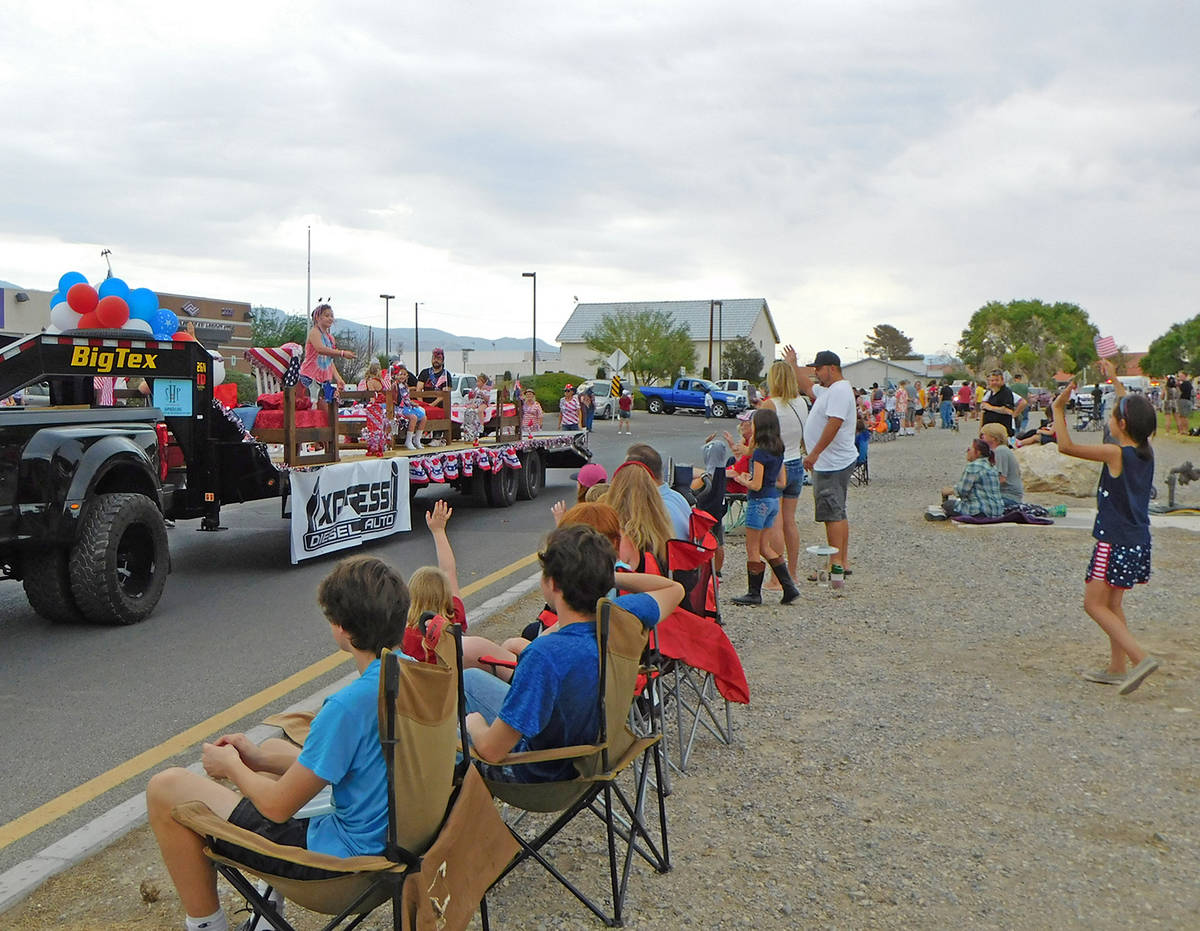 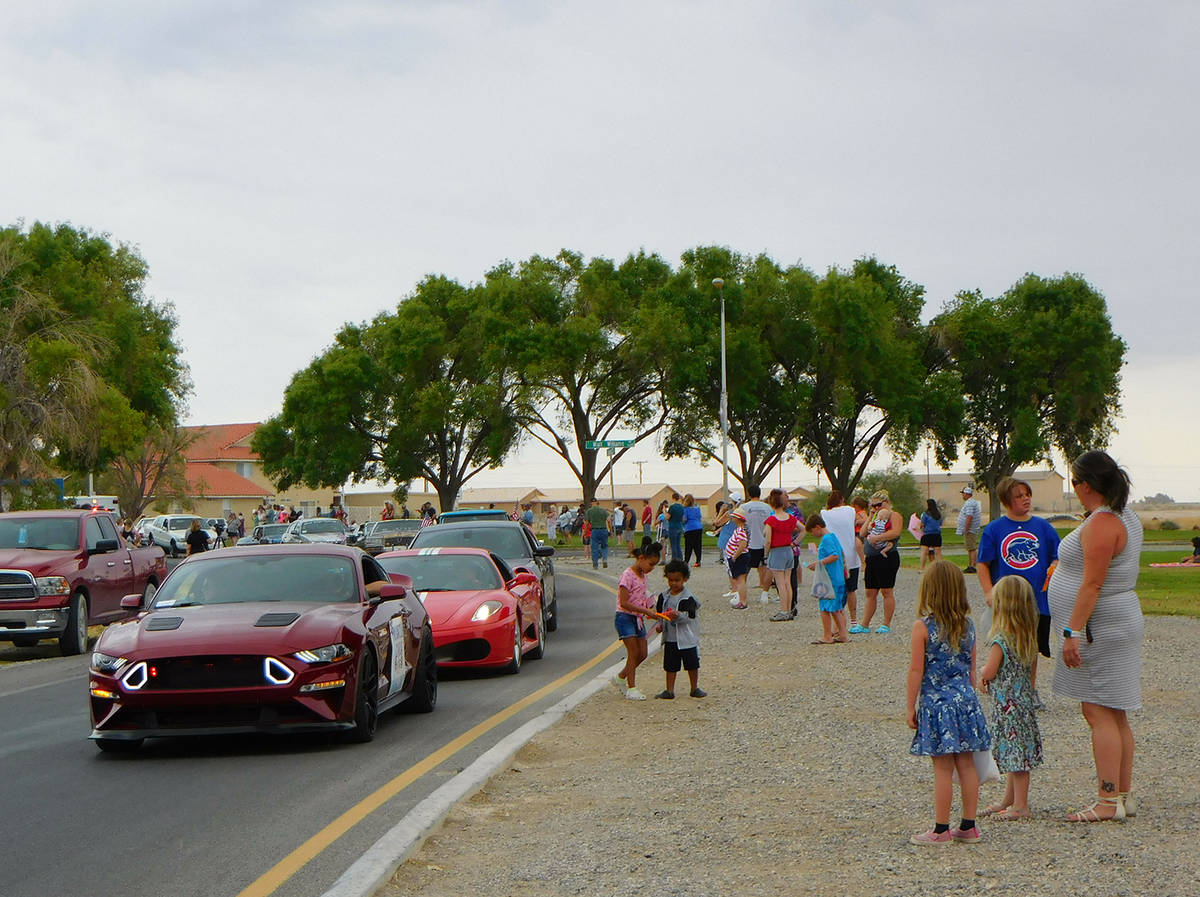 Robin Hebrock/Pahrump Valley Times Muscle cars were a crowd favorite at the Fourth of July Parade, with children running out to receive candy from the drivers. 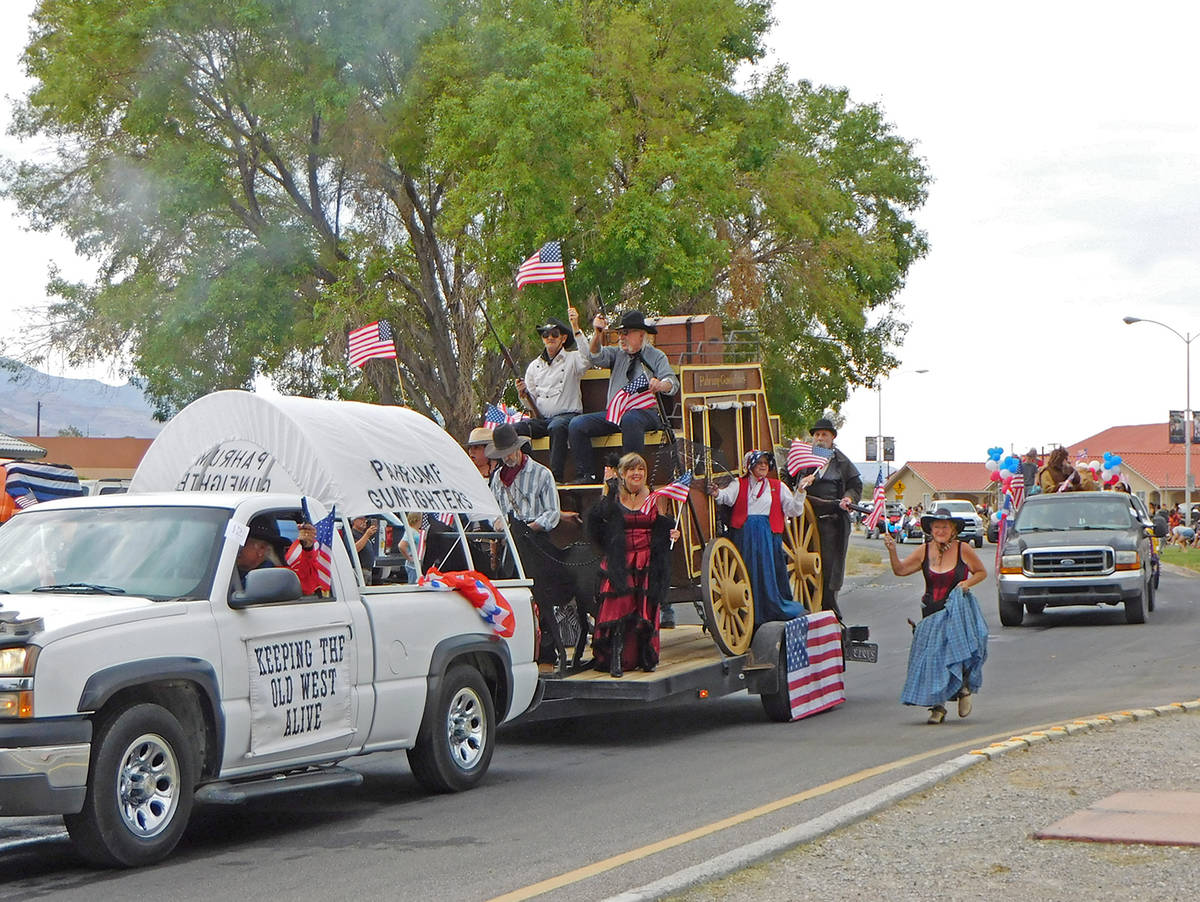 Robin Hebrock/Pahrump Valley Times The Pahrump Gunfighters took home the title of Most Enthusiastic at the Fourth of July Parade. 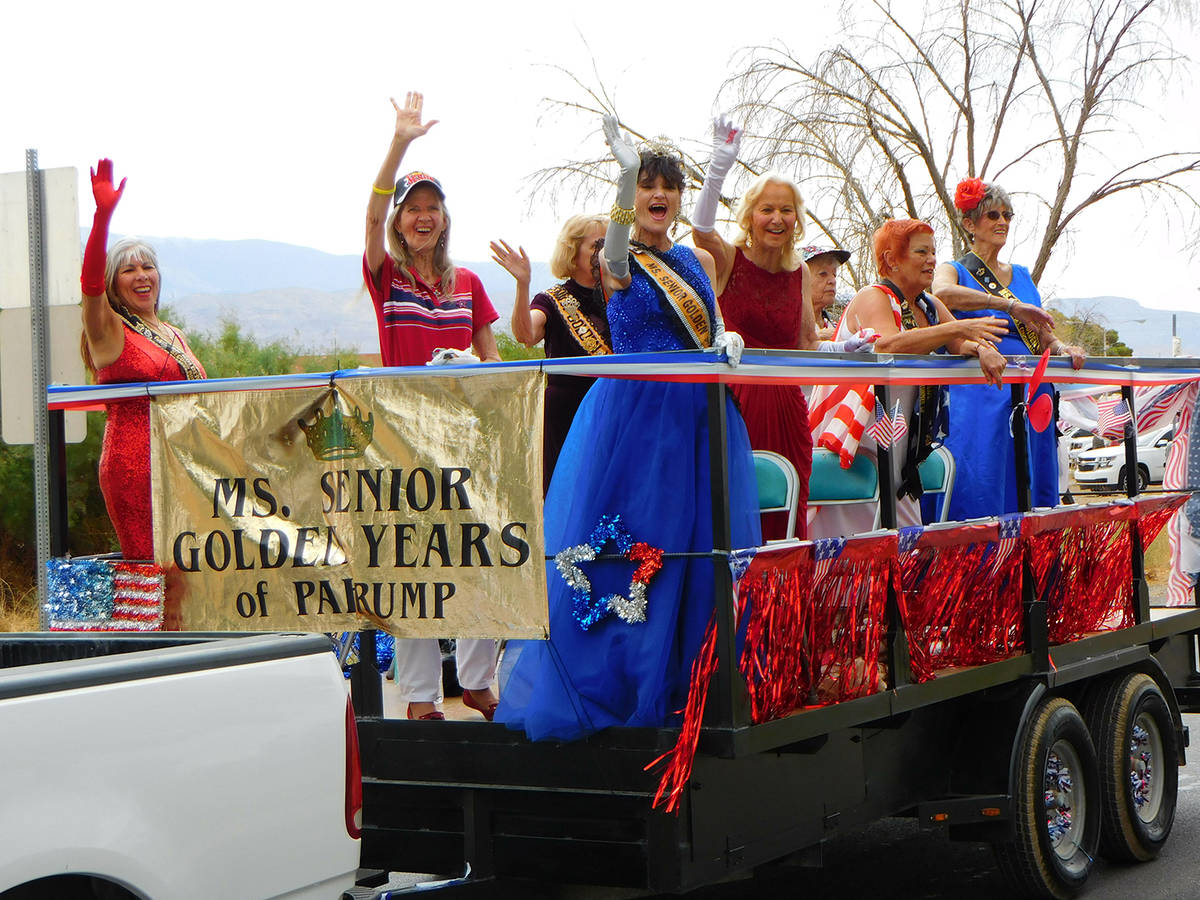 Robin Hebrock/Pahrump Valley Times The Ms. Senior Golden Years ladies are seen waving at those assembled for the Fourth of July Parade. 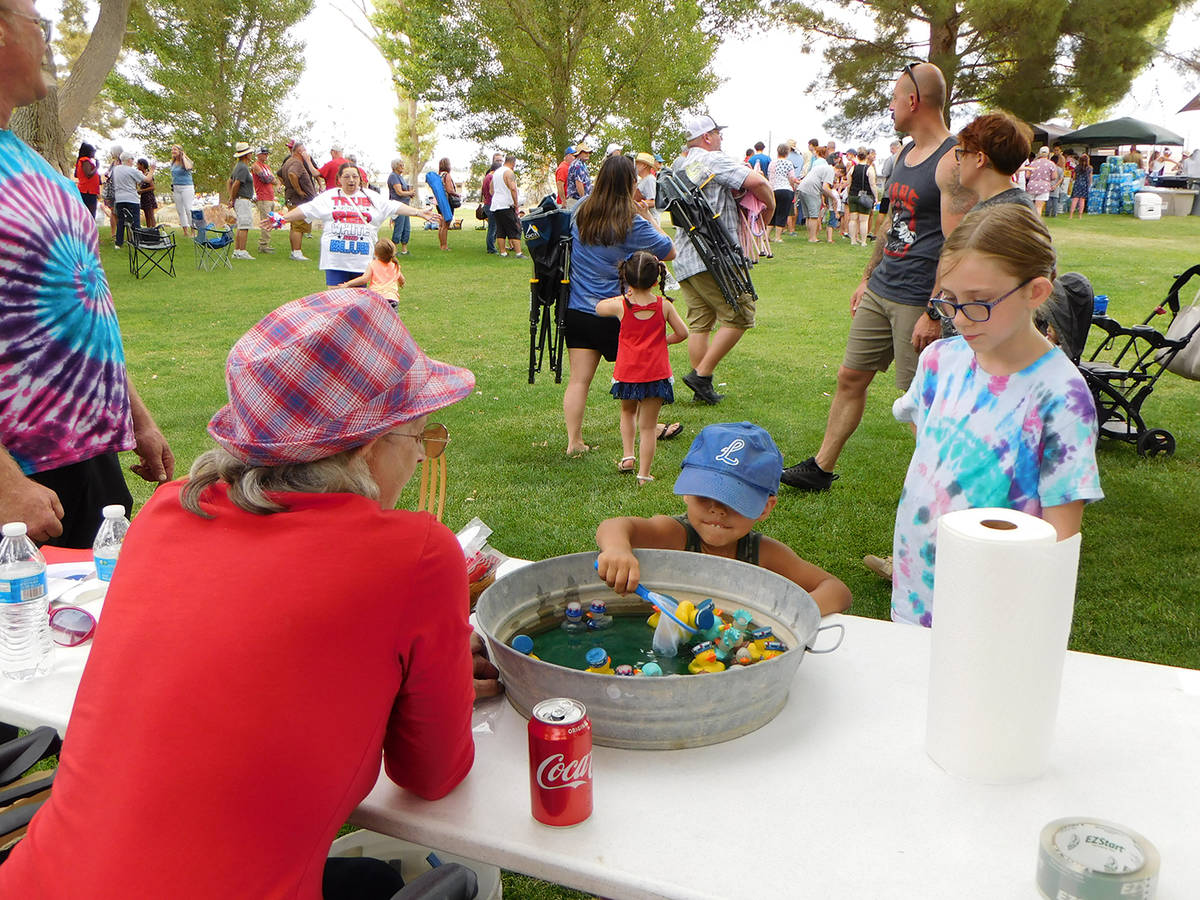 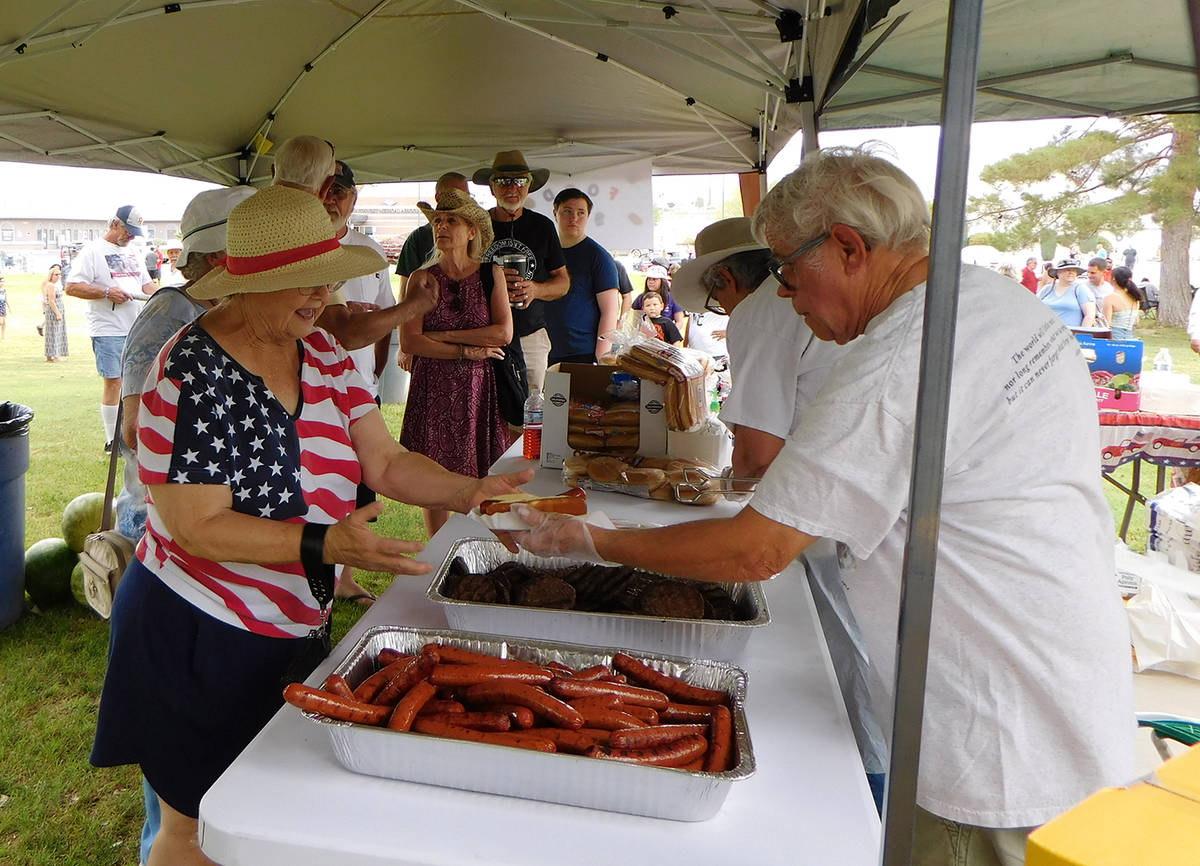 Robin Hebrock/Pahrump Valley Times Around 500 hot dogs and another 500 hamburgers were grilled and served up for free to attendees at the Pahrump Holiday Task Force's first July 4 event. 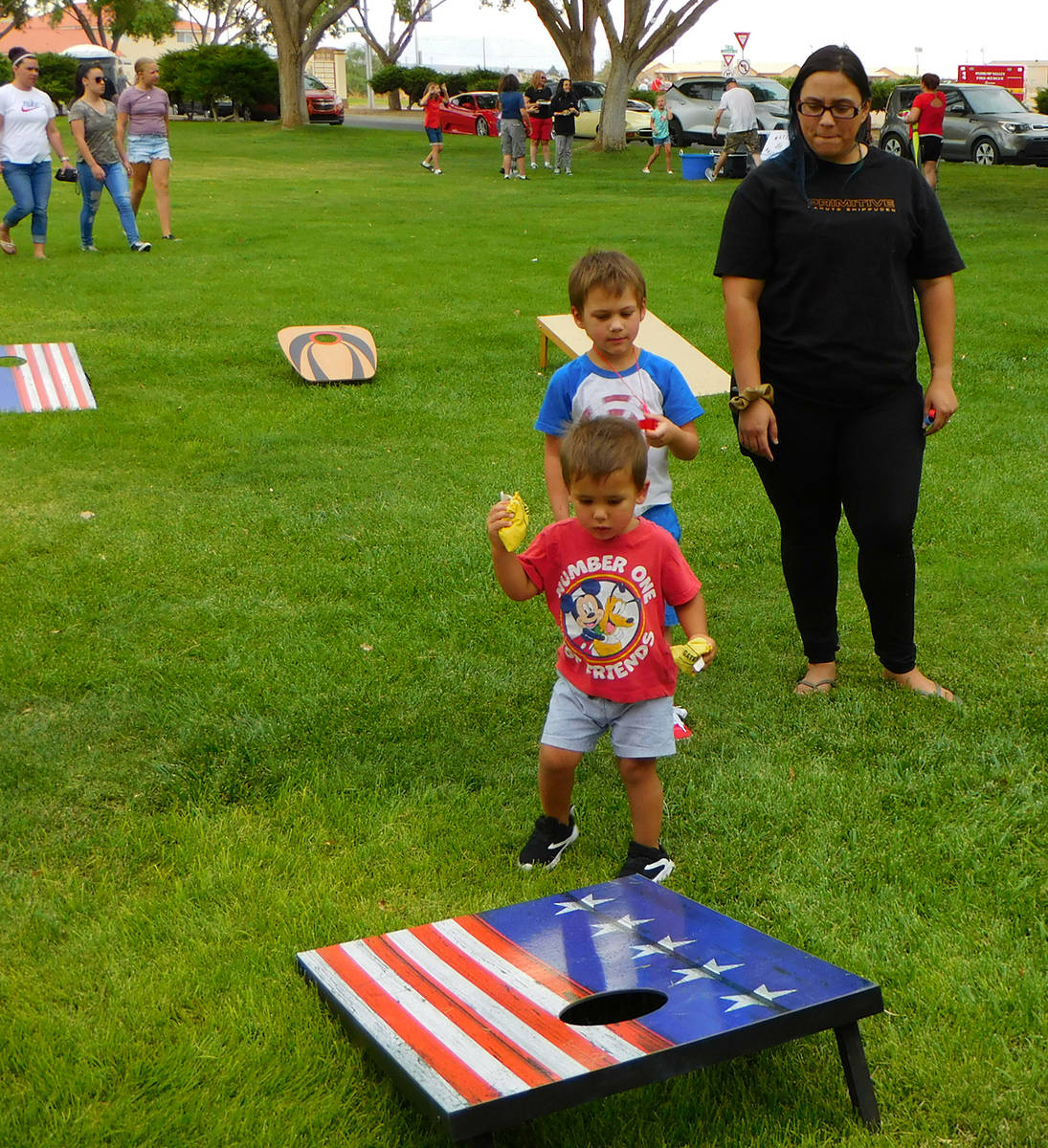 Robin Hebrock/Pahrump Valley Times A young boy is pictured playing corn hole at the July 4 festivities at the Calvada Eye.

Independence Day in the Pahrump Valley was an occasion to remember in 2021, with the Pahrump Holiday Task Force hosting its very first event in celebration of the Fourth of July and hundreds of community members turning out to enjoy all that was available during the group’s festivities.

Though overcast skies and rain would generally be greeted with dismay at most outdoor community events, not so with the task force’s first-ever Fourth of July Parade and Family Celebration, with the cloud cover and oh-so-soft sprinkles on Saturday, July 3 offering a bit of relief from the intense heat the valley has been experiencing and eliciting delighted remarks from both young and old who were out to take in the patriotic splendor on display. All in all, it was a tremendously successful endeavor and task force members were undoubtedly thrilled with the results of all their hard work and effort in putting this free community event together.

“We had many families and friends come out to watch the parade and then stay for the fun in the Calvada Eye. Families were saying they they can’t wait until next year!” Wright continued. “A friend’s 9-year-old granddaughter said, ‘Out of all of the Fourth of July events this year, the parade was the best!’ It was great to hear those remarks from the community. Another gentleman from Ohio, who was visiting his mother here in Pahrump and brought her to enjoy the parade and activities, told us that he had never seen anything like it before, especially for a free event. He was going home to speak to his chamber of commerce about organizing an event like ours!”

There were a total of 30 entries for the Fourth of July Parade and five of those entries were given a special honor once the procession came to a halt, with awards handed out for a variety of categories. The winners included the Pahrump Gunfighters float, which earned the title of Most Enthusiastic, the Sleep in Heavenly Peace float, which garnered the Most Family-Friendly award, Eddie Martinez on his four-wheel surrey bike, who took home Most Patriotic, the Port of Subs truck, which won Most Original and the group of 10 muscle cars which earned the honor of being named Judge’s Choice.

One other person participating in the parade had his own special recognition this year as well, Scott Lewis, the director of emergency management for Nye County and chief of the Pahrump Valley Fire and Rescue Service. Wright was obviously delighted to be able to shine a spotlight on Lewis during this community event, remarking, “We chose Scott for all the does as a first responder. He goes ‘above and beyond’ in his job. He always puts his team of firefighters and the community first and we decided to put him first and give him the recognition he deserves for all he does to keep us, his Pahrump family, safe every day. He deserves this and so much more. Thank you, Fire Chief Scott Lewis, for being our grand marshal for our inaugural Independence Day Parade.”

Of course, with an event of this type, in which no admission is charged and there is no formal entry point, it can be difficult to gauge attendance but Wright said she would estimate that there were about 500 people at the parade and the festival that followed. Evidencing the strong turnout, Wright reported that roughly 500 hot dogs and another 500 hamburgers were grilled up fresh and served to attendees on Saturday.

While the main point of the event was a day of free family fun, the task force was also utilizing the parade and festival as a means of raising funds to support its philanthropic efforts throughout the year and the result did not disappoint. Altogether, with parade entries and donations, including a generous donation from Living Free Health and Fitness, the task force raised $1,000 which will go directly into its coffers to help with the group’s upcoming events.

As always, Wright took a few moment to ensure she expressed her gratitude to all those who contributed to the incredible success of the task force’s first-time event.

“We have teamed up again with Pahrump Disability Outreach Program, or PDOP, just like at Easter and they are awesome! Thanks to David and his team for all they do to help us make these events a success,” Wright said. “And thank you to Joe’s Sanitation for joining in as a sponsor for this event and to also help keep everything clean and tidy!”

These were far from the only persons and organizations to earn Wright’s gratitude, however, and she offered a big shout-out of thanks to Nye County Commissioner Leo Blundo, who has been a consistent supporter of the holiday task force over the years. “We appreciate all he does for the community and on the commission. He is always there to lend a hand,” Wright enthused.

Wright also thanked the Home Depot, which donated 40 cases of water to help keep everyone hydrated, and the Moose Lodge and Heritage Bible Church for the loan of their big grills for the barbecue.

“Thank you to Rent-2-Go for donating the commercial fan/cooler, what a help for those cooking! Thank you to the Lions Club for helping with the cooking and a big thank you to all the volunteers who came out to help at the event, and John Pawlak for helping again with the parade line-up, he is my rock!” Wright said. “Thank you, thank you to the fantastic Pahrump Holiday Task Force Committee, including Eddie, Steve, Donna, Kevin, Tom, Bob, Susan, Nancy, John, Sonja, Kathleen, Nicole, Ray and my husband Bill, you all made this event happen in a short time. Miracles do happen! Thanks for all your hard work to make this the best inaugural Independence Day Parade and community event. Thank you to Pahrump for coming out and spending the day with us. We enjoy giving back to the community. See you at our next event, the Thanksgiving Community Dinner!”

For more information on the Pahrump Holiday Task Force and its free community Thanksgiving, Christmas, Easter and Fourth of July events email pahrumpholidaytaskforce@gmail.com