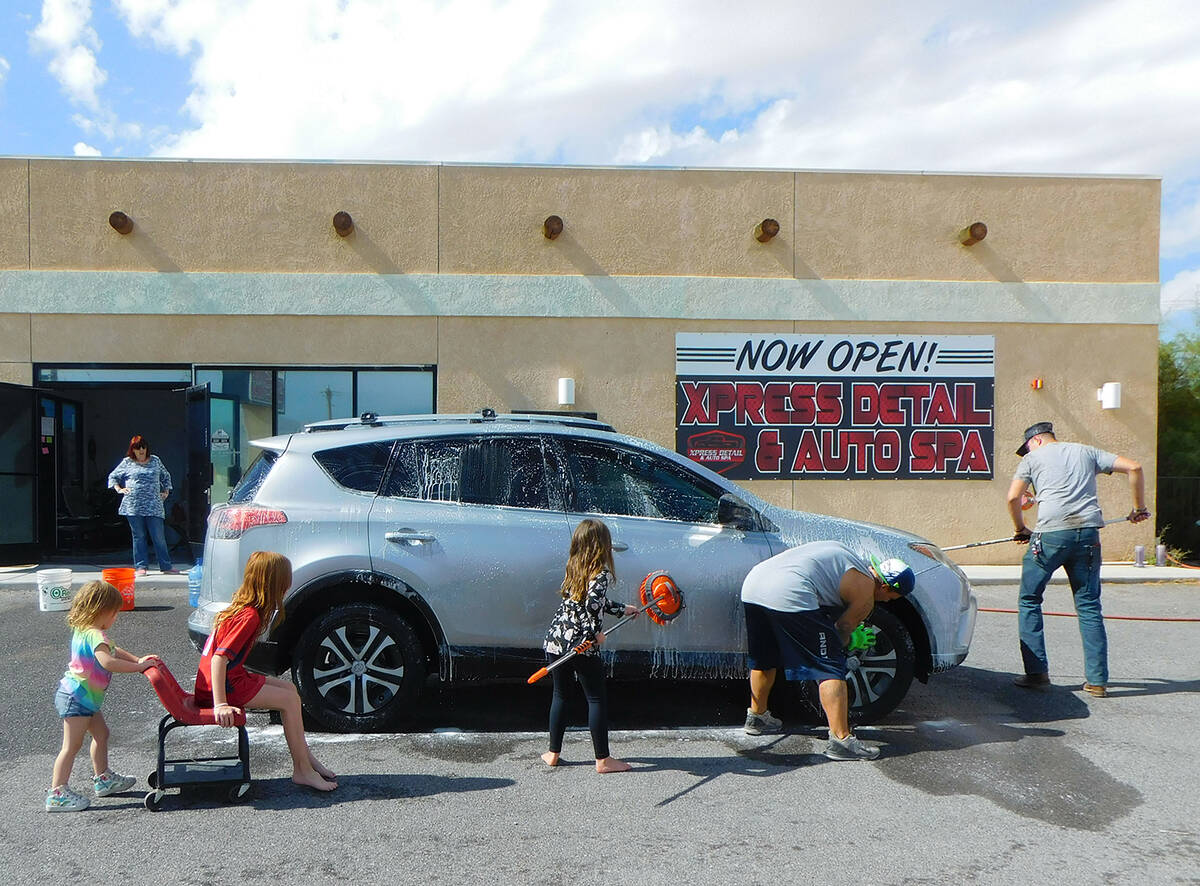 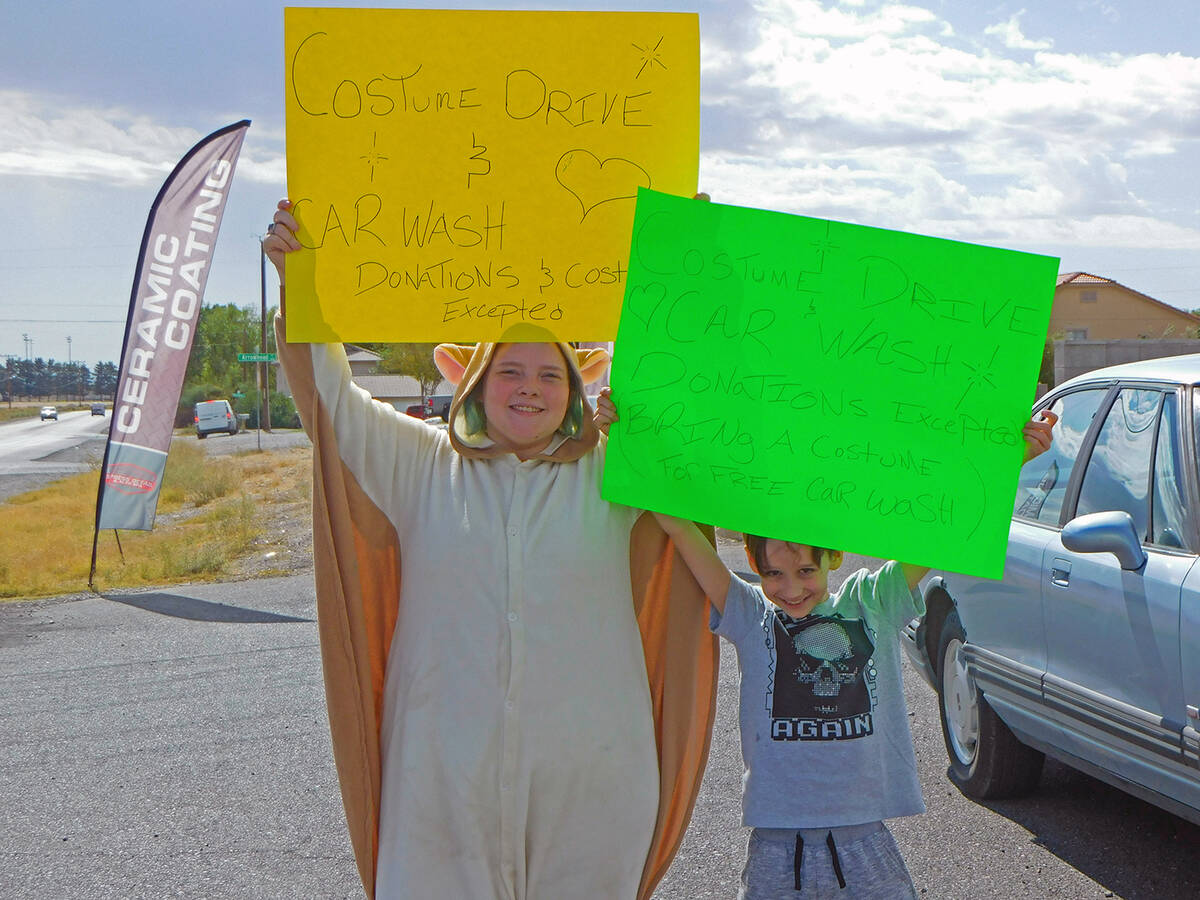 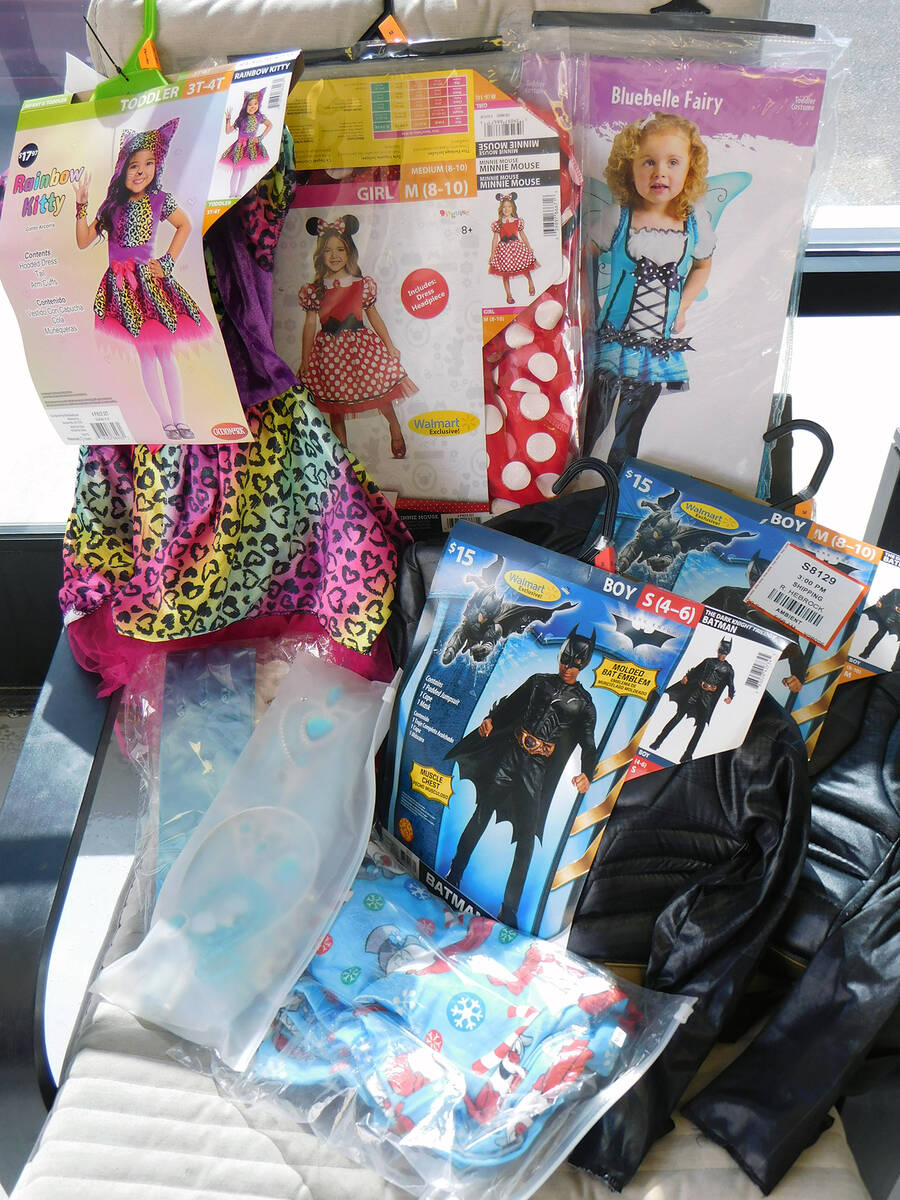 Robin Hebrock/Pahrump Valley Times This photo shows a small portion of the costumes that were donated on Saturday, Oct. 9 during the Dragna family's Halloween Costumes for Kids Car Wash event, which Shauna "Shay" Dragna said was a big success.

Amidst her own struggles and strife, Dragna decided in September that she wanted to do something special for the local community. She just so happened to be wondering what she could do for herself and her kiddos in terms of Halloween costumes when it hit her; other families were likely going through that exact same hardship, stressing about how they would manage to afford to fit out their children for the coming holiday.

This realization and her desire to help others collided and the Dragna family’s Halloween Costumes for Kids Drive was born.

Now, several weeks into the initiative, Dragna has managed to collect over 100 Halloween costumes, thanks to the generosity of area residents and businesses as well as to the recent donation event hosted at XPress Detail and Auto Spa, and she is relishing the sweet taste of triumph as she looks toward her next big event, the costume distribution party.

The Halloween Costumes for Kids Donation Car Wash took place this past Saturday, Oct. 9 and the Pahrump Valley Times headed out to take in all the action, meeting a busy but obviously excited Dragna shortly after the car wash got underway. Bubbling over with enthusiasm and praise for everyone who had come out to volunteer their time to the car wash, she said she was looking forward to the event with much optimism.

Xpress Detail and Auto Spa owner Stephanie Shelton was also bustling around the site, marshaling the volunteers and making sure all the necessary supplies were in order but she took a minute of her time to offer a few words on Dragna’s efforts.

She noted that she was delighted to be able to play a role in the costume drive but humbly remarked that she was simply following Dragna’s lead. “This is all her, all I did was kind of pull some resources,” Shelton said with a self-effacing smile. “ But you know, it’s good for both of us and it’s good for the kids, so it’s a win-win all around. I thought this was such a great idea, though, because I had never heard of anything like this, and she is doing such a great job of it, she’s killing it.”

Indeed, the costume car wash event was a pleasant success considering that it was a first-of-its-kind event with little familiarity in the community. Dragna, her youngsters and the group of volunteers that took part that afternoon were only working for about three hours on Saturday and in that amount of time, they were able to collect more than 20 additional costumes, which means over 20 local youth who will soon be able to strut their stuff in their new Halloween costumes this holiday. In addition, the group gathered enough cash donations to help fund the party Dragna will be holding next weekend to distribute the costumes.

Dragna gave a shout-out of thanks to all those who participated in the car wash event, including Shelton, Alice and Chance Davis, Jonathan Campos, Jordan Brockbank, Derek Howard and Jason Layton, as well as Steph Thompson from Steph’s Designer Puppies and Dragna’s mother, Sheryl Spargur.

“And we have to say thank you to Big Dick’s Pizzeria too,” Dragna added. “They came by, got their van washed and then brought us a giant pizza for all the workers to enjoy. I would say this was definitely a success, thanks to all of our volunteers.”

With Halloween now just over two weeks away, Dragna is nearing the culmination of her Halloween Costumes for Kids Drive and residents have just one more week to chip in, with the deadline for costume donations being next Friday, Oct. 22.

There are several places people can visit to drop off their donations, including XPress Detail and Auto Spa at 980 Pahrump Valley Blvd., just south of the roundabout, JT’s A to Z Beauty Supply at 171 S. Frontage Road, in the green building across from Walmart, and at Walmart itself, where there is a donation box set up near the Red Box machines. Dragna is accepting both new and gently used costumes.

Once all the donations are in, Dragna will be holding a Halloween party for the families who will receive the costumes she’s amassed. That party will take place on Saturday, Oct. 23 at XPress Detail and Auto Spa and in order to ensure that the distribution process goes smoothly, Dragna is asking that all who wish to receive a costume for their child pre-register for the party, so she knows for certain that she will have a costume for each child that attends.

Additional details on the Halloween party, including the time of the event, can be obtained when pre-registering. To pre-register for the party text Dragna at 775-990-7918.